A Swank Evening at The Saratoga A taste of old and new at The Saratoga in San Francisco.

Even though it opened in November, The Saratoga feels like it’s been a part of San Francisco for years — which I think is one of the greatest compliments you can bestow upon a bar-restaurant.

The newest establishment by the Bacchus Management Group is housed in a 1907 building in the Tendernob neighborhood that was once a hotel. The original brick in the interior was exposed in the renovation, as were its striking steel beam trusses. The effect is a modish industrial look that’s also timeless — old-school San Francisco spit and polished. I had a chance to check it out on a recent packed Saturday night, when I was invited in as a guest of the restaurant.

A wide staircase sits almost in the center of the two-story establishment, making for rather tight quarters between tables. A dramatic steel and crystal chandelier of cascading sparkling hoops dangles from the ceiling into the stairwell, doubling as a sculptural art piece. Tables are set around the stairwell, both on the main floor and the one below. A massive bar with shelves of liquor lighted from below is the focal point of the first floor. There’s also a second bar downstairs. If you need to use the restroom, you’ll have to go downstairs and thread your way gingerly past all the people standing at the bar or sitting at the nearby tables. A touch of neon in the dining room.

The Saratoga has that glam yet illicit feel the moment you step in the doors, owing to the quite dim lighting that’s broken up only by that showstopping chandelier and the small candle on each table. Mine was definitely not the only table pulling out a cell phone to use as a flashlight to read the menu. The darkness provides a certain edgy moodiness, but it also makes it hard to really see the food on your plate in detail. And that’s kind of a shame because the food is so playful and inviting here.

But a cocktail is in order first. After all, when a place sports two well-stocked bars, a libation is a must. The gin, bourbon, whiskey offerings cover many pages in the menu. And yes, you can even indulge in a glass of 23-year-old Pappy Van Winkle. You’ll just have to pony up $108 to do so. I went with something both lighter on the palate and the pocketbook: the Japanese Blended Highball ($14), made with whiskey, yuzu, mint and soda. It’s pretty with all the fresh mint leaves muddled in it, and quite refreshing with its forward note of bright, floral citrus.

When a table of two sat down next to us, eyed our dishes and asked for some recommendations, I told them the Parker House Rolls ($4) are a must-order. If you love warm, fluffy, soft bread rolls, these will win you over from the first bite. They arrive with a golden sheen with a touch of sea salt sprinkled over the top. They are perfection. I could have easily eaten a second order of them. And the table next to us? They swooned equally when their order arrived. 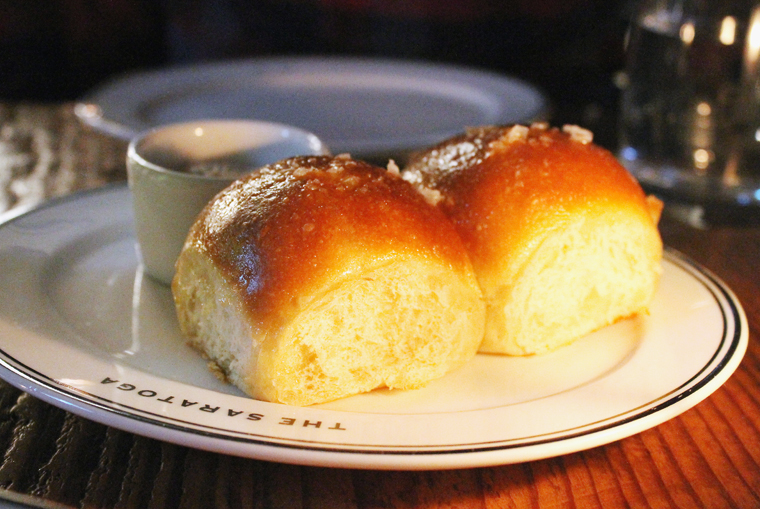 Bread lovers will go nuts for these. The rolls are under the “snacks” category, which is a great option to peruse if all you want is something fun to nibble with a cocktail. From that category, we also tried the ‘Toga Tots ($8). Looking almost like golden fried nuggets of tofu, these cube-shaped tots were done almost poutine-style — with Fiscalini cheddar grated on top, along with bits of chorizo and scallions. They are not the crispiest tots on the outside necessarily, but they boast a delightfully creamy interior. 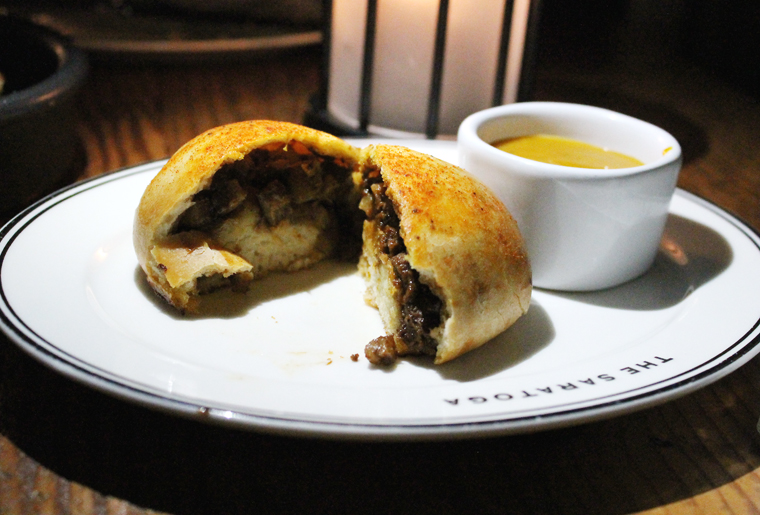 Also under that category is the Seven-Spice Chicken Slider ($7), a golden, pillowy bun sandwiching a crisp piece of chicken smeared with spicy, tangy “bama white sauce, and garnished with dill pickles. And the Spicy Pork Belly Bun ($6) that looks like a baked Chinese pork bun. But take a bite and what hits you is more like Southern pulled pork, imbued with spicy, sweet-savory barbecue sauce.

We figured we needed some vegetables after that, so it was on to Roasted Carrot Salad ($12) — whole carrots roasted with cumin until sweet and caramelized, then arranged on a plate with a big smear of crema, crunchy toasted sesame seeds, and fresh avocado slices. It’s a dish with big flavors, so much so that you can’t stop eating it. Carrots — all dressed and ready to party. 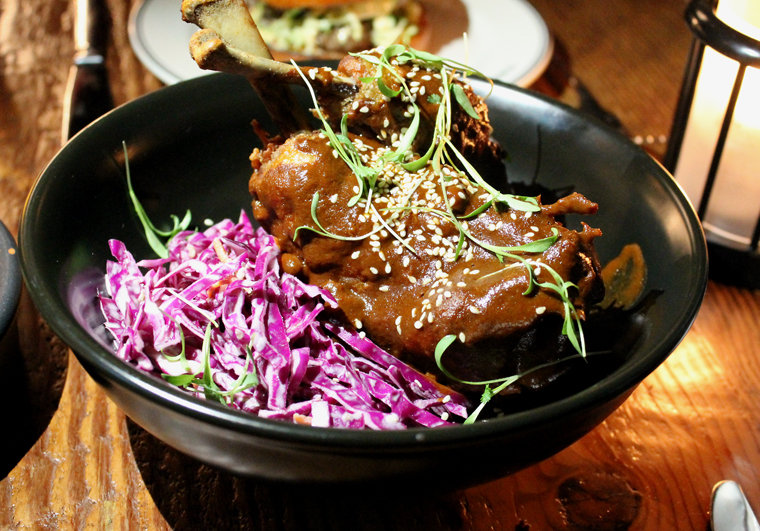 For the mains, my husband, aka Meat Boy, ordered the Saratoga Burger ($15), but of course. Two patties are stacked in between a bun that cleverly has thin strands of onions baked into it. Rich Taleggio cheese, slaw and a piquant mojo relish round out this juicy, utterly satisfying burger.

I went with the Mole Fried Chicken ($21). It’s a big portion with two legs fried, then dressed in a thick, earthy, complex mole sauce. Pickled red cabbage slaw helps lighten the dish. Yes, the sauce definitely tends to soften the crisp coating of the chicken. But still, there are bits of crunchiness here and there as you bite. It’s a lusty, comforting dish.

Desserts are nostalgic here, and you might want to order every one of them. The Ho Hos ($9) are indeed an elevated version of the ones you used to buy at the supermarket. When the two little chocolate-frosted roulades, with fillings of vanilla cream arrive on the plate, you can’t help but smile. You may remember eating them as a kid, but they were never as good as they are here. 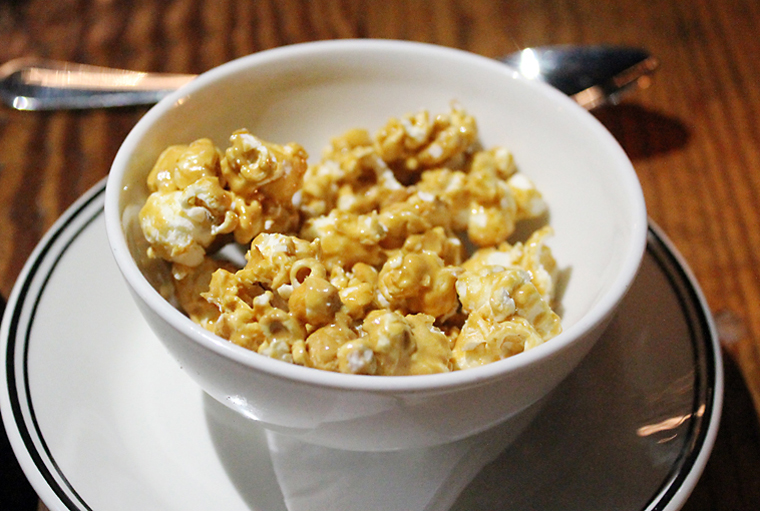 Scotchy Scotch Scotch Pudding ($9) is definitely full of boozy Scotch flavor from the Black Label Scotch used in the caramel that tops it. The caramel top, though, makes the airy, velvety pudding a little sweeter than I wish it were.

Our server also brought us out a sample of the Cracker Jack ($7). The candy-coated popcorn is crisp and fresh tasting with peanuts underneath here and there. The touch of salt was a nice addition, too, to balance out the sweetness.

Whether you’re in the mood for a full-on dinner or just a cocktail with a whimsical nosh, The Saratoga delivers on a very good time.