The minimalist decor of light woods, including on the ceiling, ensure that it’s the food that garners all the attention here, as it should be.

The folded paper menu lists not only the dishes but background on the chefs and restaurants from which they originated. Some might find dining here a bit discordant because of the way the menu, and thus the dishes, veer from one culture to another, and one style to another. But when I dined here with my husband and two friends (we paid our own tab), we rather enjoyed the volleying between dishes, which made each stand on its own all the more.

With the four of us, we were able to practically order every dish on the menu. Some are easier to share than others. But if you are content at times with only one small bite, it can be done. 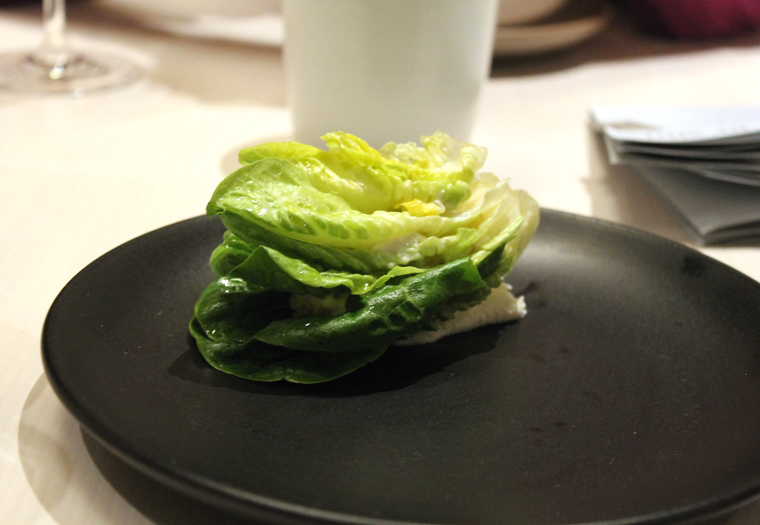 A sandwich of lettuce leaves and more.

We began with the Lettuce Sandwich ($14), recreated from Chef Christian Puglisi of Relae in Copenhagen. It looked like a simple small stack of Little Gem lettuce leaves. The Romaine had been fermented yet was still crisp. The leaves were dressed with olive oil and goat cheese. It was a refreshing start, but I don’t know if any of us necessarily could distinguish it from any other perfectly dressed salad we’ve had in the past. Yes, this is a burger. Behold the cheeseburger patty inside.

In contrast, the Apocalypse Burger ($14) is like nothing you’d ever imagine a burger to be like. By Chef Anthony Myint of Mission Street Food and the Perennial in San Francisco, it looks like a charcoal briquette on a plate. In fact, $1 from each burger goes toward food-related carbon offsets through ZeroFoodPrint. The slider-sized “bun” is actually more like a paper-thin black cracker shell. Pick up the top half to reveal a tiny patty covered in melted cheese. There’s a big leaf of lettuce on the plate and a ramekin of “special sauce.” You eat this burger by wrapping the whole shebang in the lettuce leaf, smear on some sauce, then fold it up to eat like a wrap. It’s clever and thought-provoking, and definitely fills the burger pangs if in a modest way.

Glazed Chicken Thigh ($22) by Chef Hiroshi  Sasaki of Gion Sasaki in Kyoto, Japan is like the best version of chicken teriyaki you’ve ever had. Imagine it not cloying for once, but balanced between just sweet enough and full-on savory, with juicy, gingery chicken chunks and a delicate oozy egg in the middle to puncture so the yolk spills over everything, making it more voluptuous. Teriyaki chicken at its finest. If it’s foie, it’s got to be Au Pied de Cochon.

Octopus and the Coral ($24) by Chef Virgilio Martinez of Central in Lima, Peru, brought tender chunks of braised octopus in seaweed. The saucy dish was a little spicy, and its rather beefy-briny flavor reminded me for all the world of a classic, long-simmered Chinese soup.

Plogue & Champlain with Foie Gras ($46) was so over-the-top delicious it could only be by Chef Martin Picard of Au Pied de Cochon of Montreal. A generous portion of seared and lacquered foie gras lay over a buckwheat pancake with cheddar, bacon and egg. It was like the richest breakfast of champions imaginable.

The Forest ($28) was more virtuous with its quinoa risotto laden with buttery mushrooms, and parsley “moss.” The dish, created by Chef Mauro Colagreco of Mirazur in Menton, France, did indeed evoke a majestic old-growth forest. 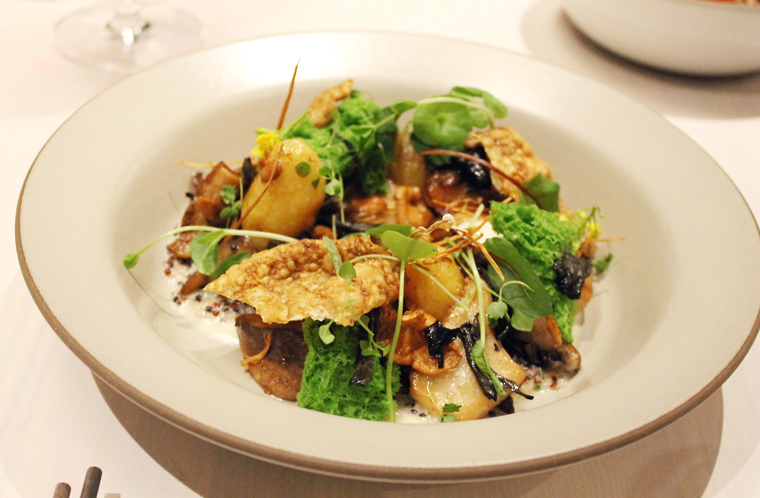 Comfort in a bowl — shrimp and grits.

Creole BBQ Shrimp and Grits ($24) was by Oakland’s own Chef Tanya Holland of Brown Sugar Kitchen. The creamy, buttery grits were a perfect foil for the spicy shrimp. One of my dining companions thought there was too much garlic, but I definitely didn’t mind it. What we all did agree unanimously on was that our favorite dish of the night was the Wasabi Lobster ($26). We were expecting its origins to be from a metropolitan U.S. restaurant or a cutting-edge one in Asia. Instead, it was by Chef Tim Raue of Restaurant Tim Raue in Berlin, Germany, of all places. The gorgeous dish featured a lobster tail coated in what one dining companion described spot-on as “wasabi Special K.” Crispy little flakes with the heat and hue of wasabi clung to the tender lobster. Mango jelly, Thai vinaigrette, and teeny wasabi marshmallow stars garnished this spectacular dish that was at once delicate yet powerful. Our final savory item was Kalbi Jjim by Chef Roy Choi of Los Angeles. At $34, it was the most expensive dish of the night. For the price, it also was surprisingly skimpy with only one good-sized chunk of braised short rib, plus a second minuscule one. It came with a small bowl of rice. While it tasted fine, we thought it didn’t have nearly the oomph we were expecting.

Three desserts were offered that night, and we ordered every one of them. After watching Netflix’s “Chef’s Table” episode that immortalized the famed “Oops! I Dropped the Lemon Tart” ($16) by Chef Massimo Bottura of Osteria Francescana in Modena, Italy, I had to try it. It actually looked a little less shattered than I thought it would. But the creamy lemon tart was as bright and welcome as sunshine on that rainy winter night. 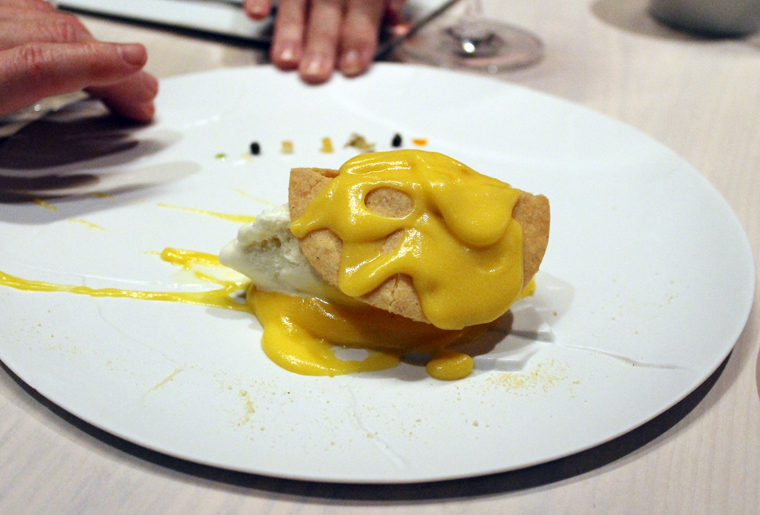 Interpretation of Vanity ($16) was a fun chocolate dessert that actually tasted as light as air. By Chef Andoni Luis Aduriz of Mugaritz of Errenteria, Spain, it arrived covered in bubbles like the kind you made as a kid by blowing air into a glass of chocolate milk with a straw. Underneath was a moist chocolate cake with cold almond cream.

It was the Jasper Hill Farm Cheesecake ($22), though, that blew my mind. Of course, that’s because it was created by Albert Adria (Ferran’s brother) of Tickets in Barcelona. You’re advised at the start of the meal that if you want this dessert, you should order it early into the meal, as it will take more than 20 minutes. Believe me, it is worth the wait. What looks like a palm-sized wheel of cheese complete with label comes to the table with lilliputian crackers. Only it’s really a cheesecake made with white chocolate alongside tender little butter cookies. The cheesecake is creamy, not nearly as dense as a traditional American one, and slightly savory tasting from ripe brie. Spread some on a cookie and prepare for complete bliss.

In Situ may not be inexpensive. But it’s far cheaper than several plane rides across the globe. It’s also a most delightful way to send your palate on an unforgettable adventure. And just think: You don’t even have to worry about your luggage. 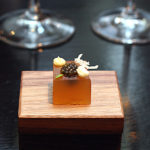 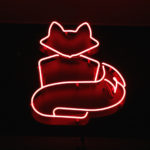 And: Dinner at Monsieur Benjamin