Fresh Tomales Bay oysters that I got at my local library, of all places, thanks to Real Good Fish.

Just-caught fish, delivered conveniently to pick-up locations in your Bay Area neighborhood each week, with reasonable prices and no long-list of middlemen to tack on more costs.

That’s what Moss Landing’s Real Good Fish is all about.

Established in 2012 by founder Alan Lovewell, who studied international environmental policy, it was one of the first community supported fisheries in Northern California. It operates in much the same way as a CSA. But instead of buying a “share” in a farm that provides you with a box of produce each week, you buy a “share” in the group of local fishermen that Real Good Fish partners with.

Not only are you getting impeccably fresh, local, sustainable, seasonal fish, but helping to support fishermen and their families in your community. 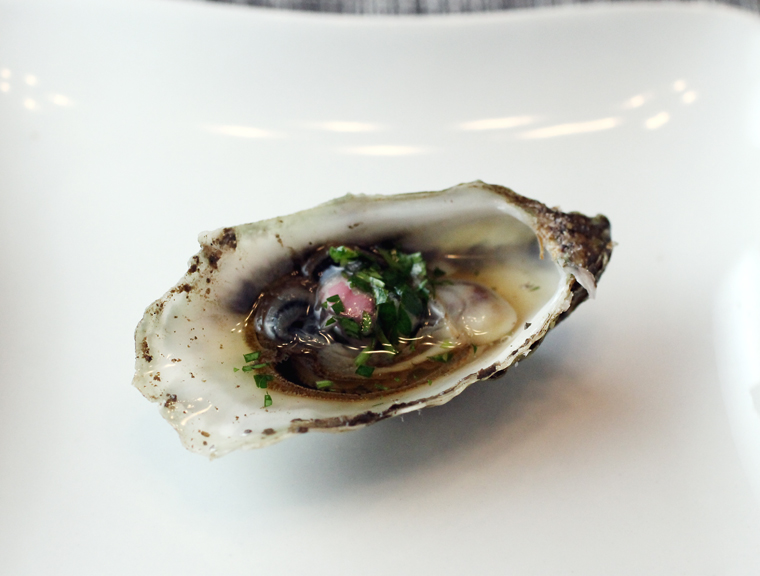 I shucked some to enjoy on the half shell with mignonette sauce.

I was invited to try some sample deliveries, receiving a weekly full share (1 to 2 pounds of seafood), which is normally $22 per week.

Real Good Fish sent me a cute insulated tote bag with which to pick up my seafood each week. My designated pick-up spot was my nearby library. It was a little amusing the first time I walked up to the periodicals desk to get my tote bag filled with fish after giving my name. As I walked out of that hushed building with the goods, it felt like scoring in a drug deal, only with something actually healthful. 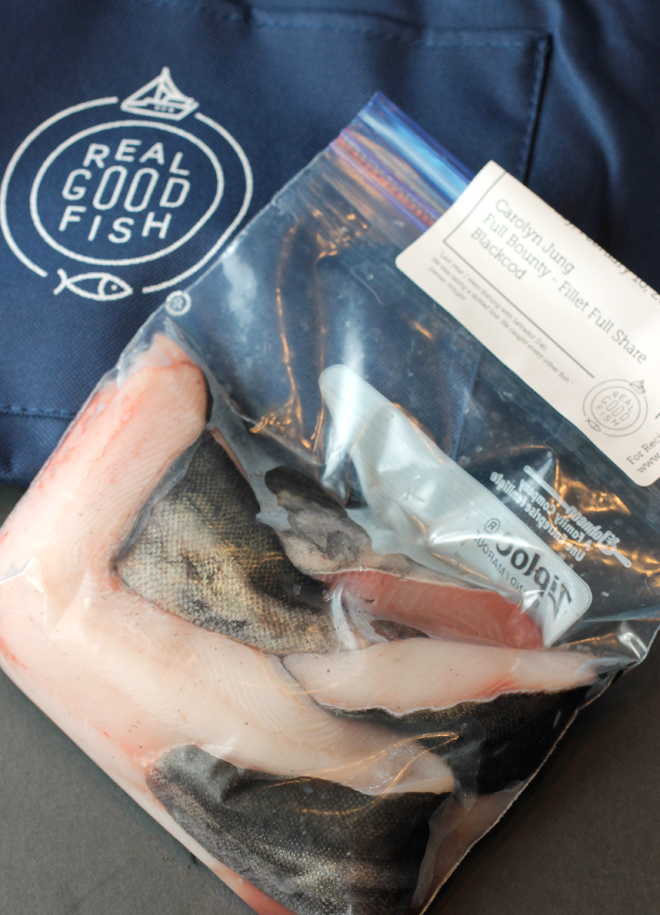 Picking up my black cod.

If you’re worried you’ll be caught off-guard with seafood you’re unfamiliar with or unprepared to cook, have no fear. Real Good Fish sends out an email the day before letting you know what you’ll be getting, along with links to recipes for it, as well as information on where it was caught, when, and by whom. You can also opt out of a particular species if you are allergic or hate it. Or put your allotment on hold if you’re going on vacation.

I’ve tried a couple of CSFs, and I have to say this one offers probably the widest variety of items — everything from Big Sur sanddabs to Monterey Bay anchovies to Ridgeback prawns to red abalone. Though, it also means you might have to work a little more to prepare some of them.

For instance, one delivery consisted of 18 Marin Miyagi oysters from Tomales Bay, which requires shucking if you want to enjoy them on the half shell. That’s just what I did with half of them, garnishing with mignonette sauce. They’re dainty oysters, about the size of a quarter once you get them out of their shell, and deliciously briny. The other half of the oysters, I shucked, then broiled with a fabulous sriracha lime butter recipe from Food52, which would be good on just about any seafood. 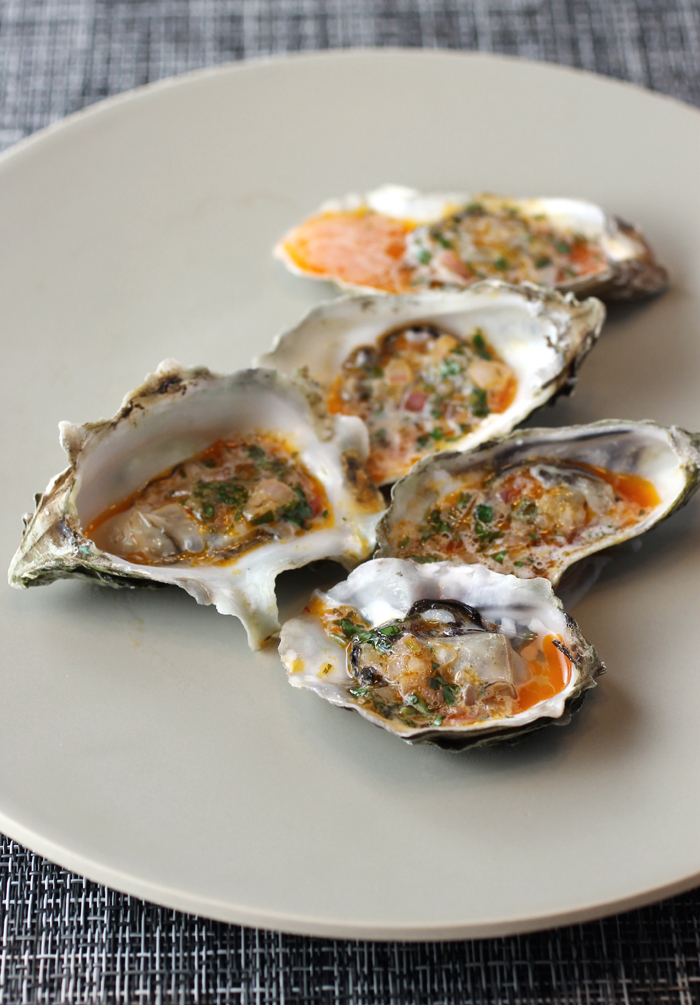 Another delivery of black cod still had the skin on, which also still had some scales on it, so I opted to remove it. There were quite a few pin bones in one of the fillets, too, which I used tweezers to remove as many as I could, before baking them using the “Black Cod with Lime and Coconut” recipe on the Real Good Fish site. The saucy dish had Thai-like flavors, complementing the moist, rich fish. Next time, I might add a splash of fish sauce to the coconut milk-sauce for even more Asian flair. 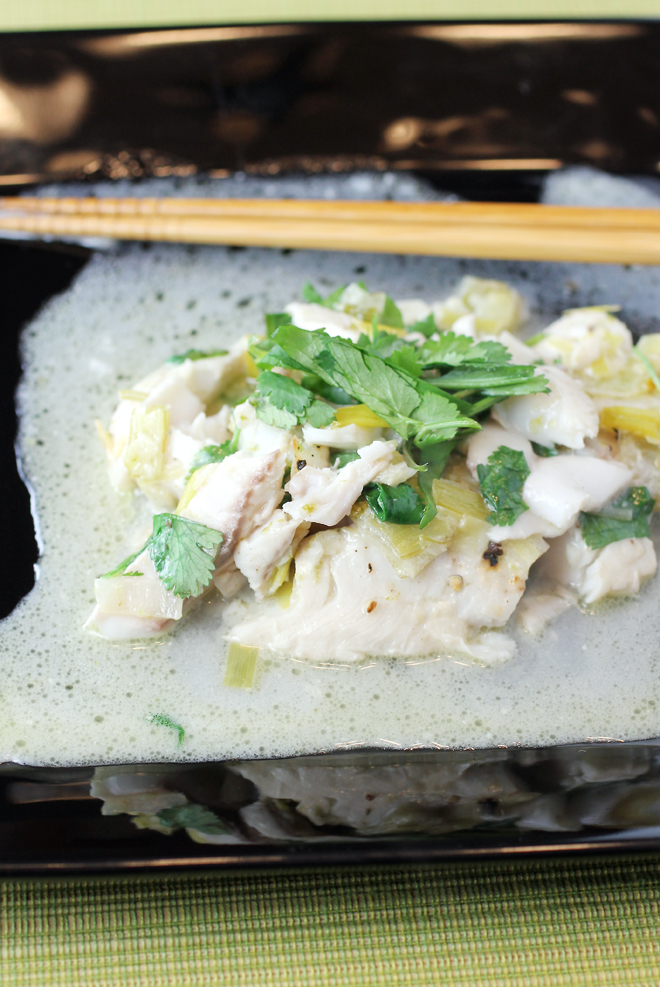 The Black Cod after cooking.

One week, I received Pacific Dover Sole, which I don’t know if I’d ever tried before. It’s not related to European Dover Sole, and is more like a flounder. It’s a very delicate fish and quite mild tasting. I punched things up by trying it on the New York Times’ recipe by Melissa Clark, in which you broil the fish in a light but pungent curry sauce with fresh ginger and lemon zest. It cooks in mere minutes, leaving you with a dish so flavorful you would have thought you’d have to spend three times longer to make it. 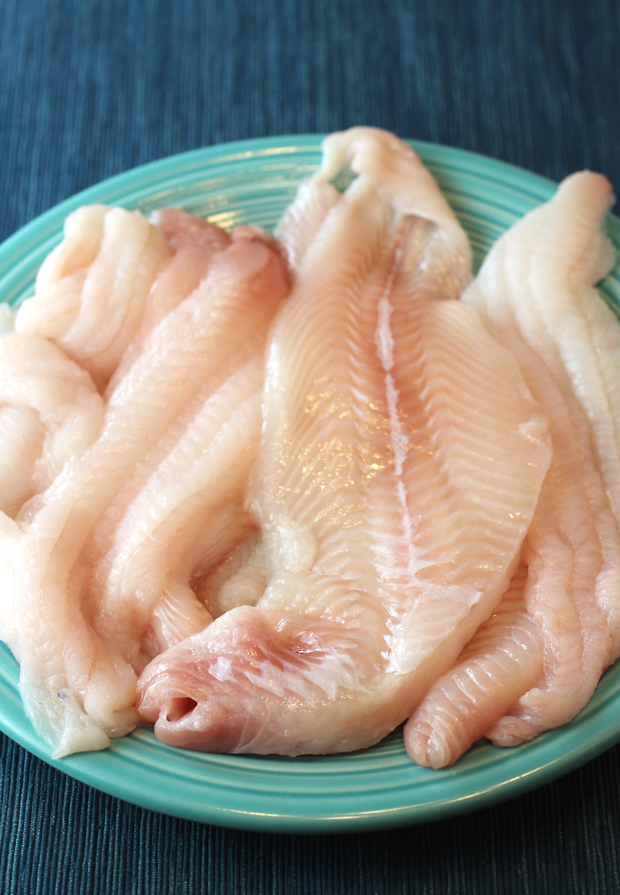 Baked with a curry-lemon butter sauce.

Real Good Fish is noble in its endeavors — in more ways than one. It also started its Bay2Tray program three years ago, which sells fresh fish — bycatch that’s less desirable in the marketplace but totally delicious — to local schools for use in their lunch programs. Read more about it in my story in EatingWell magazine.

Season fish with salt and pepper and place on a rimmed baking sheet. Pour sauce over fish and broil until fish is flaky and cooked through, about 5 minutes. Top with a squeeze of lemon juice and fresh dill, and serve.

From Melissa Clark, as published in the New York Times