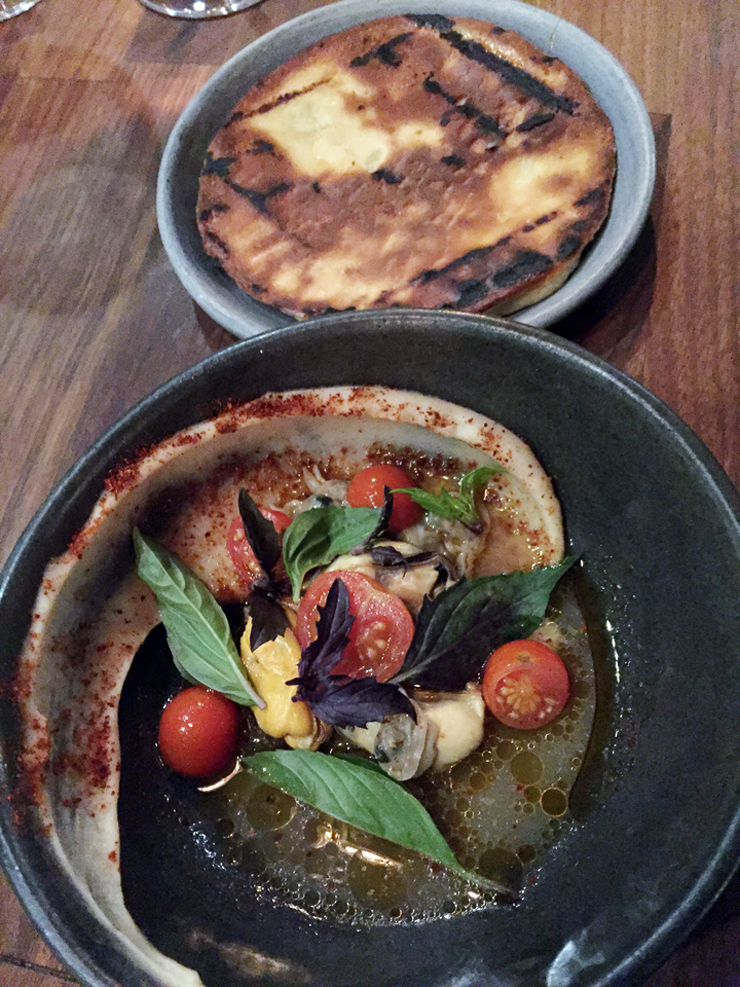 I may have been in Los Angeles last month for only four days, but I did some major eating in that short time. Come along for a taste.

In a building inside SoCo design complex in Costa Mesa is the OC Mix, a mini marketplace of fun trendy shops and small cafes.

It is here you will find Taco Maria. Its artsy locale is fitting because this is high-concept Mexican food by a chef who used to cook at Coi in San Franciso and Commis in Oakland.

Nope, this is not your standard enchilada- or burrito-drowned-in-cheese kind of place. While it serves a la carte lunch, it turns into prix fixe-only at night. And what a fine parade of dishes you’re in for with the $75 four-course meal (wine pairings are $35 extra), which is quite reasonable for what you get. 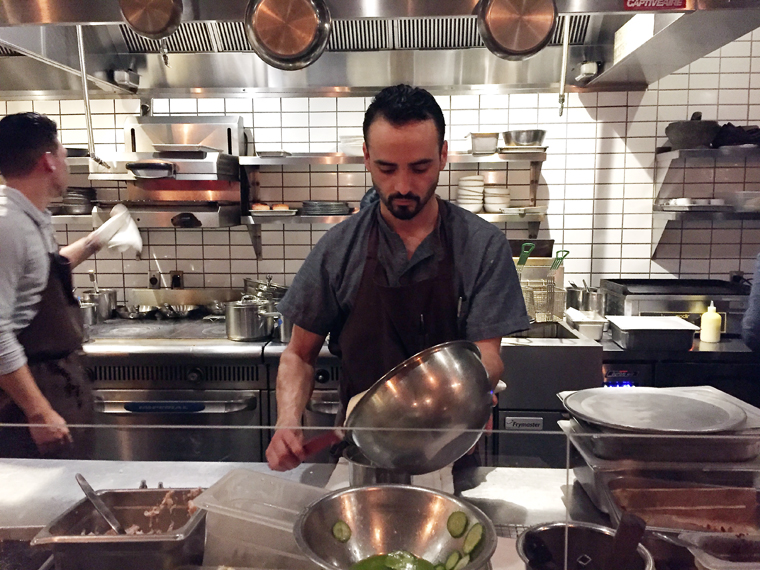 Sitting at the counter, you are up close and personal with the cooks preparing your food.

Each course offers a choice of two dishes. So if there are two of you dining, you can order the entire menu and share tastes of everything, which is what my husband and I did. Sit at the counter in front of the small kitchen, and you can watch the cooks in action.

When Chef Carlos Salgado moved back to Orange County from the Bay Area, he started cooking out of a taco truck. His creativity really shows now in his prix fixe offerings. 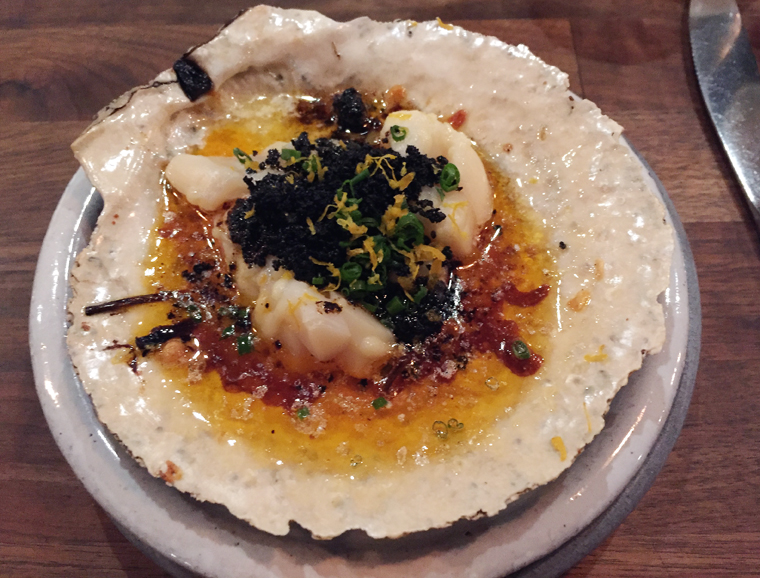 Among our favorite dishes were: Tamal de Zanahoria, a slightly sweet and incredibly corn-y tasting tamale with an earthy mole amarillo sauce plus ginger cream; and Callo Gratinado, scallops in a scallop shell with chile ancho and squid ink crumbs.

Caballa con sabores de Caesar, grilled mackerele with braised romaine and a soft egg yolk was like the best warm Caesar salad ever. And Tocino con frijoles was a glorious slab of juicy, fatty braised bacon with black beans and avocado leaf. 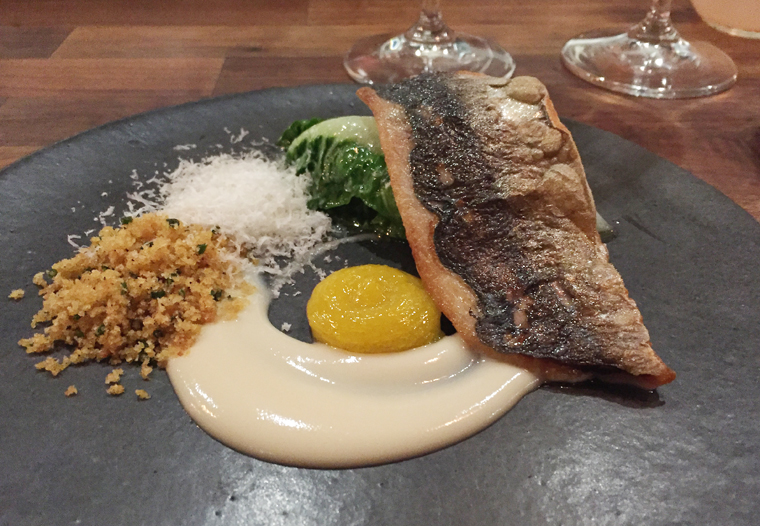 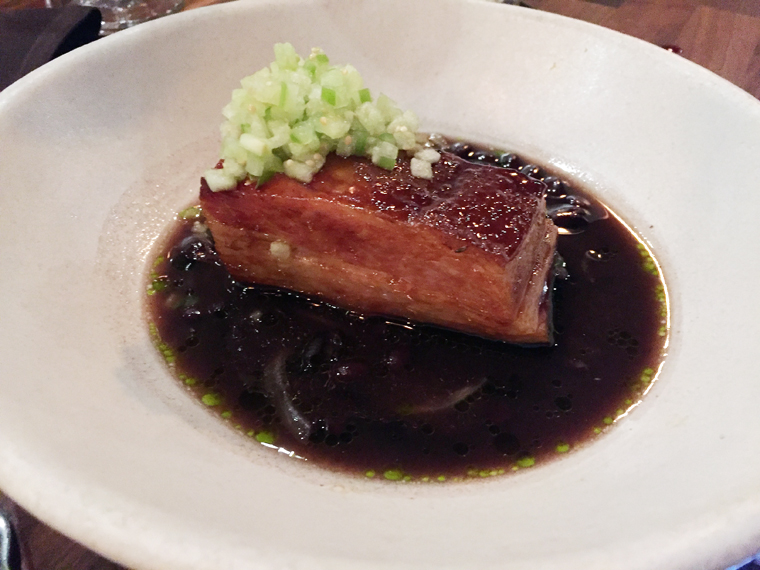 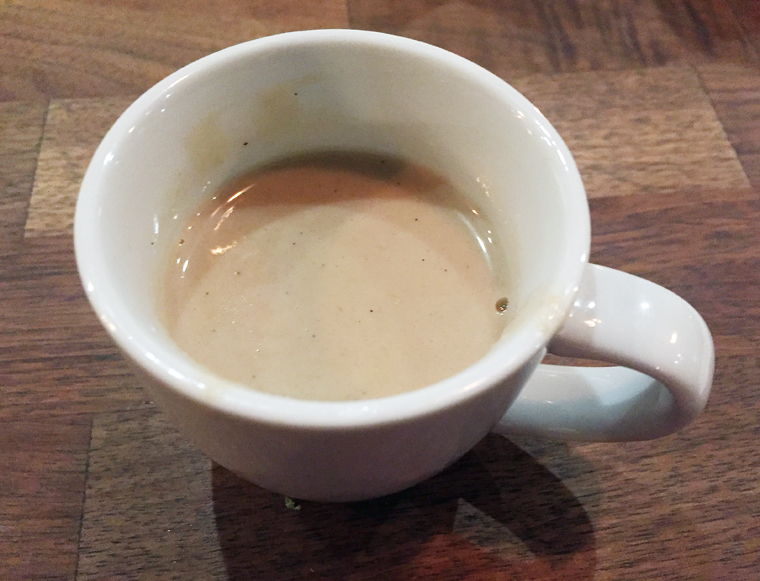 There is spice to the food, but nothing that will blow out the palate.

The one thing there isn’t is dessert. Instead, your last taste is a small espresso cup of a traditional foamy, creamy corn drink spiked with coffee liqueur. It’s sweet, nutty and hits the spot.

Whenever I head to Los Angeles, I always consult Jonathan Gold’s Top 100 list.

The Pullitzer Prize-winning restaurant writer for the Los Angeles Times has never steered me wrong. 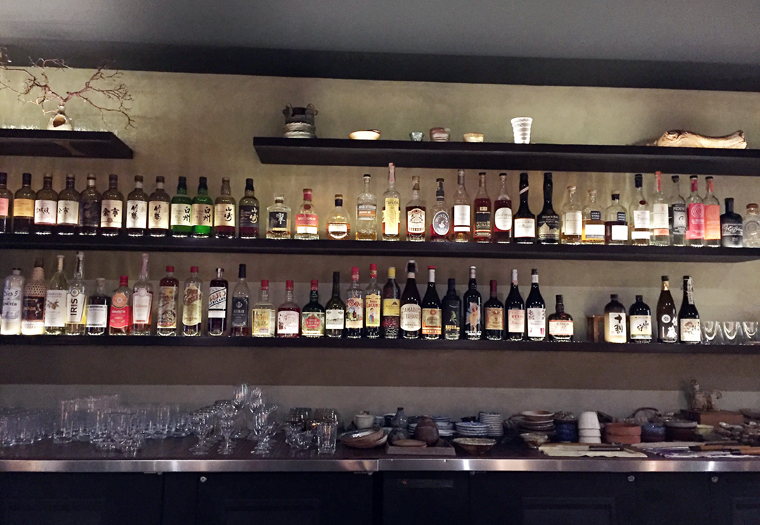 Shibumi has a curated list of sochu, wine and cocktails. At the bar, you can watch the cocktails made or some of the food being garnished in front of you.s

So when I read his review of Shibumi, I knew I had to go. This exquisite izakaya is located improbably smack against a downtown parking garage. There’s no real sign outside, either, but you can’t miss it from its simple, Ginza-like exterior.

Chef David Schlosser has quite the pedigree, having cooked at L’Orangerie, Ginza Sushiko and Urasawa in Los Angeles. He also was the embassy chef in Tokyo.

Given all that, I was expecting a rather hushed, solemn experience. But Shibumi is anything but that. It’s draped in darkness inside, with a stark, modern vibe accentuated by pulsating club music enveloping the dining room. Rather than being off putting, though, it kind of puts you at ease. You get the feeling that the food on the plate may be rarefied, but you don’t have to put on airs to enjoy it. 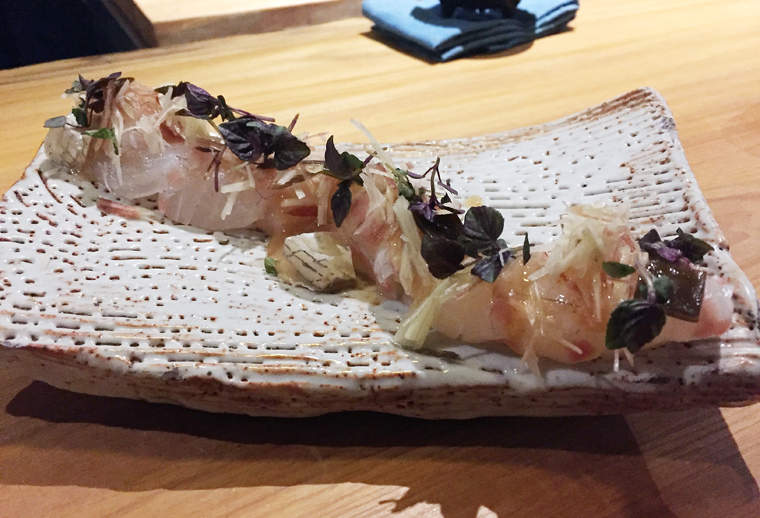 There is an omakase option that starts at $90 per person. Or you can pick and choose from the a la carte menu, which is what we did.

Japanese sea bream sashimi ($22), sliced ever so thinly, was garnished with threads of ginger bud and tiny cubes of fish skin gelee. Yes, think fish skin finger-jello, made from cooking down the natural gelatin of the fish skin. Amazing. Young bamboo with shiso-miso. If it’s on the menu, get it.

Gold had raved about the vegetable-centric dishes. The dengaku of young bamboo ($16) was one of the most extraordinary things I’ve ever had. The bamboo was cut cross-wise and served like an artichoke. You’re meant to tear off a layer, dip it into the mound of thick, shiso miso, and use your teeth to scrape off the tender part, while leaving behind the fibrous part. The shiso miso may have looked like something from the bottom of a swamp, but it tasted like it descended from heaven — pungently salty, fermented, umami-heavy, and minty and green. I wanted to smuggle a gallon of it home. 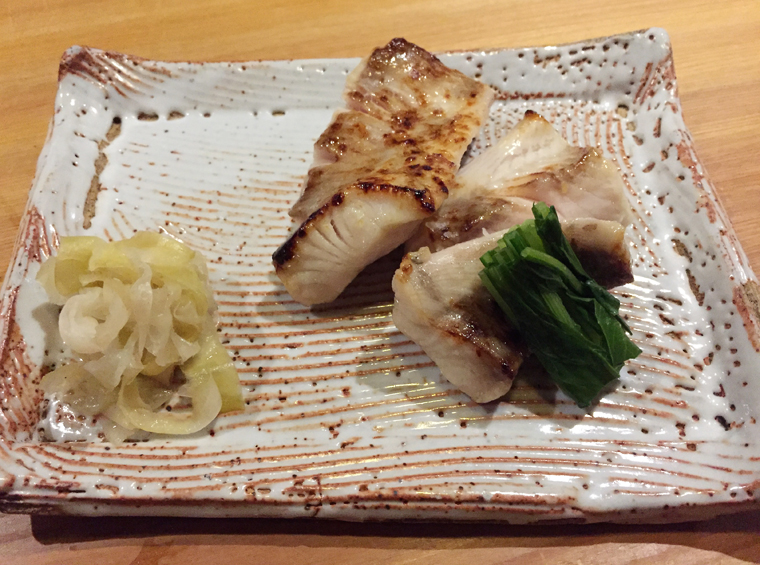 Egg tofu ($18) was crowned with uni and fresh wasabi — a light, spoonable custard enlivened by the sweet sea urchin and floral, burst of heat from the rhizome. I’m a sucker for onigiri, and these with pumpkin ($10 for two) are just plain amazing. They’re served in a unique ceramic dish that looks like someone cut a vase in half to cradle them in. The nearly palm-sized rice balls with barley are coated with sesame and pumpkin seeds and have a slab of kabocha pressed into them. They’re beautifully crunchy on the outside, with a smoky flavor from the grilling. The sweet, soft pumpkin adds an irresistible touch.

For a tongue-tingling time, head to Mian, housed in a large Asian strip mall in San Gabriel. The Sichuan eatery adds a lot of Sichuan peppercorns and chilies to its dishes, so no matter what you order, you’ll end up with numbed lips and sweat building on your brow.

This food is rather addicting. There’s something about the fiery flavors that just keeps you coming back for more. Noodles are a must-order at this temple of spiciness.

Mian means “noodles” in Chinese, and this is definitely the place to get a bowl of chewy, toothsome, springy, al dente noodles. What’s more, you can even get an extra helping of noodles for FREE, which is rather mind-boggling. It comes in a separate small bowl alongside your regular order. It’s a great way to share one noodle bowl with a dining companion, while allowing you both to try other dishes, too.

That’s what my husband and I did, ordering the signature Chengdu Zajiang Noodles ($8.99). The homemade noodles arrive covered in minced pork, green onions and a fried egg, if you like. The spicy, deep red, chili oil sauce is in a pool at the bottom, so mix it all up before digging in. It’s full of heat and savoriness. It’s the kind of food you can imagine eating with beer — or to recover from a hangover. Complimentary pickled cabbage and a mug of that mysterious beverage. 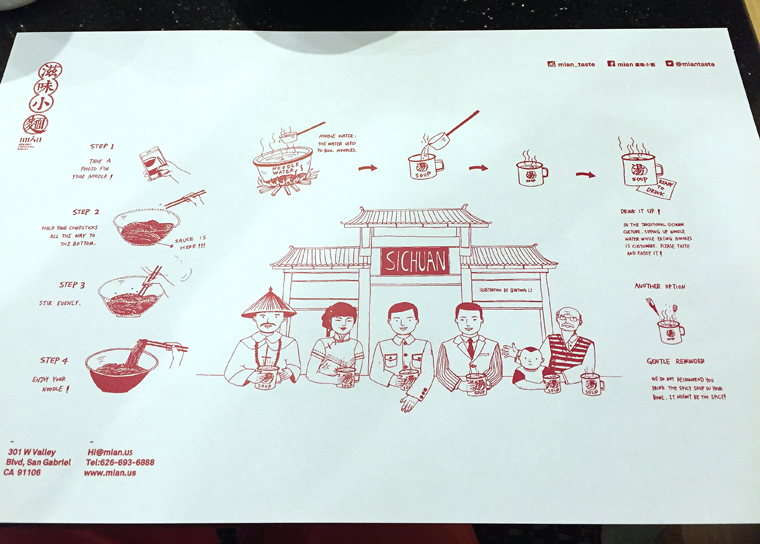 A small plate of pickled cabbage arrives right when you sit down, along with mugs of cold, opaque liquid that has been described as being made from the cooking water from the noodles. It’s slightly sweet, too, with a flavor reminiscent of mung beans. An illustrated place mat instructs you to drink it. It’s a rather mysterious beverage. My husband wasn’t necessarily a fan of it. But I did find that the sweet sip did help douse the fire on the palate in between bites of the fiery food. 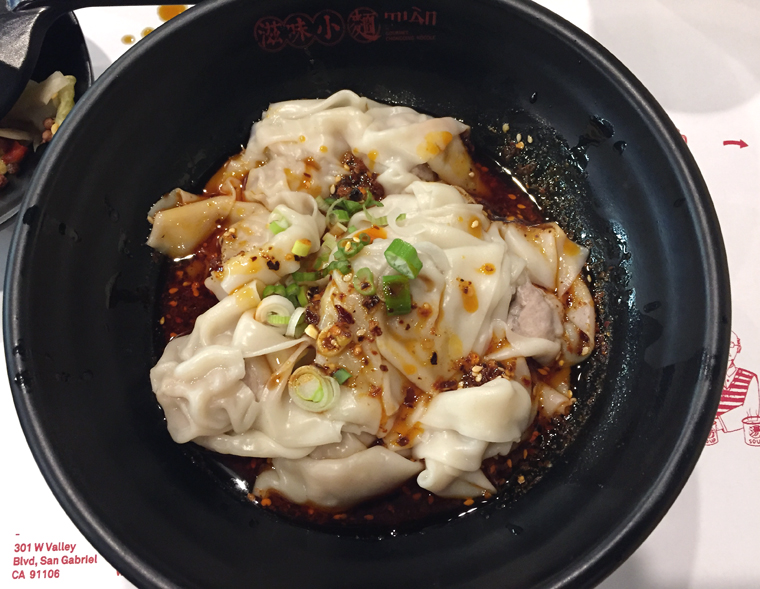 It’s said that we like spicy food because the capsaicin in chili peppers can induce a state of euphoria if you eat enough of them. Whether it was that or the deliciousness of the food, itself, we definitely left with a bounce in our step. 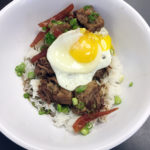