You may be familiar with smoked salmon and smoked trout. But Robert Young wants you to get to know smoked Maine lobster.

His Vinalhaven Smoked Lobster company is named for Vinalhaven, a small island 12 miles off the coast of Maine, where Young fishes.

For the past decade, he’s been catching fresh lobsters aboard his boat, then steaming them, before extracting the meat to smoke over either cherry or hickory chips. The flesh is then either preserved in oil or turned into a lusty dip.

There’s a practicality to it. As he explained, fresh lobster will last only seven days. But after smoking, it has a 30-day shelf life.

There’s also much deliciousness in it, as I learned when he sent me samples to try.

What is smoked lobster like? It’s denser in texture than just steamed or boiled lobster. And it doesn’t flake like smoked fish does. Instead, the bite-size morsels are firm with a chew to them. The taste is sweeter than smoked fish, too. The cherry wood smoked lobster is more delicate tasting, accentuating the inherent sweetness of the mollusk, while the hickory-smoked lobster is much more full-on smoky, savory tasting. The nuggets are great as an hors d’oeuvre or folded into scrambled eggs. With eggs, cook them in some of the residual oil the lobster came in, too, for a delicious breakfast or light supper.

The dip is thick and rich with cream cheese. Again, the hickory-smoked version is more full-on smoky in taste. The lobster does get a little lost in the dip. Certainly, you do taste seafood in the dip, but whether you’d automatically guess it was lobster is debatable. Even so, it’s hard not to stop dipping one cracker after another into it. The sampler pack includes four small containers so you can try both dips and both styles of smoked lobster.

In last week’s Food Gal contest, I asked you to tell me something you did for the hell of it (or the hal-i-but). The winner will receive two free orders of Alaskan halibut (four 6-ounce fillets; a total value of $33.98), plus two free containers of Fisherman’s Stew (two 22-ounce containers; a total value of $19.98) — all from Daily Fresh Fish. 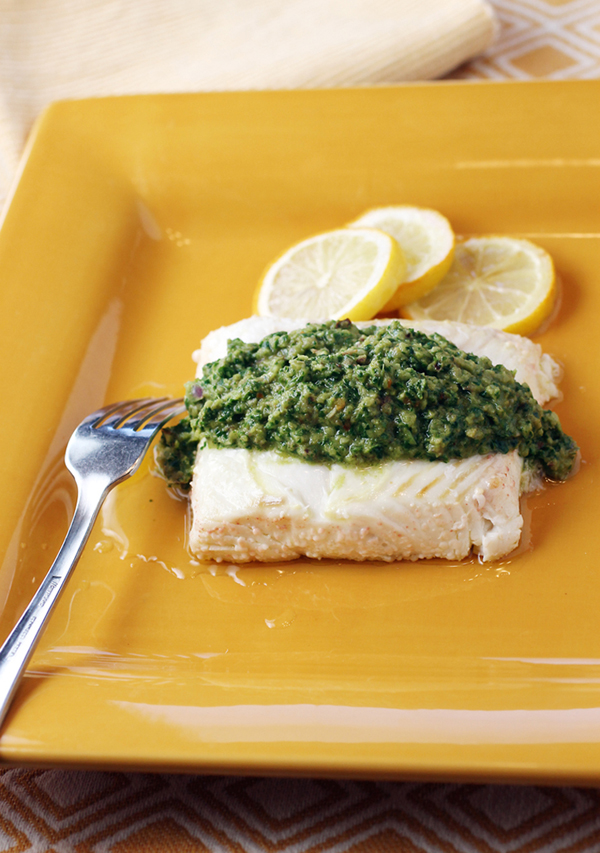 I poached my halibut sample in olive oil, and served it with a lively chermoula sauce.

Carol Ezovski, who wrote, “That’s easy. I decided after two years of college (age 19) that I wanted out of our small town in Idaho and out of my failing current relationship. I packed up and flew to California which was 900 miles away — I had no job, no car, and no place to live lined up beforehand. This sounds too stupid to be true (but it is) — the way I chose where I was going to move to was a song I heard on the radio — Do You Know The Way to San Jose by Dionne Warwick. So, for the hal-i-but, that’s where I went! I stayed at the YWCA for awhile, found a pretty good job in a short time, and met my future husband the first month I was there. It was an absolutely insane thing to do and I would be horrified if one of my kids even thought about it, but it all worked out for me in the end! I’ve never regretted it.”