The Spanish Table, with locations in Berkeley, Mill Valley, and San Francisco, is a great place to pick up rice, paella pans, and most anything else you might need for a Spanish-style feast. As for squid ink, you can find it at more upscale grocery stores, such as Draeger’s, where it’s often sold frozen.

A well-seasoned sofrito is key to a good paella, Canales explained. Sofrito is to Spanish cooking what mire poix is to French cooking, an essential blend of onion, garlic, tomato and saffron cooked down to impart foundational flavor. Canales is partial to saffron from northern Iran, which costs twice as much. It’s so fragrant that when he opened the jar and poured some into a bowl, you could smell it two feet away.

Once the sofrito is ready, he adds hot broth and squid ink to the pan on the stovetop, before sliding it into the oven. Purists might consider that sacrilege, as paella is traditionally cooked over an open fire. Canales used the oven for practicality. “I want a controlled environment that allows enough evaporation,” he said. “Plus, I only have so many burners.” 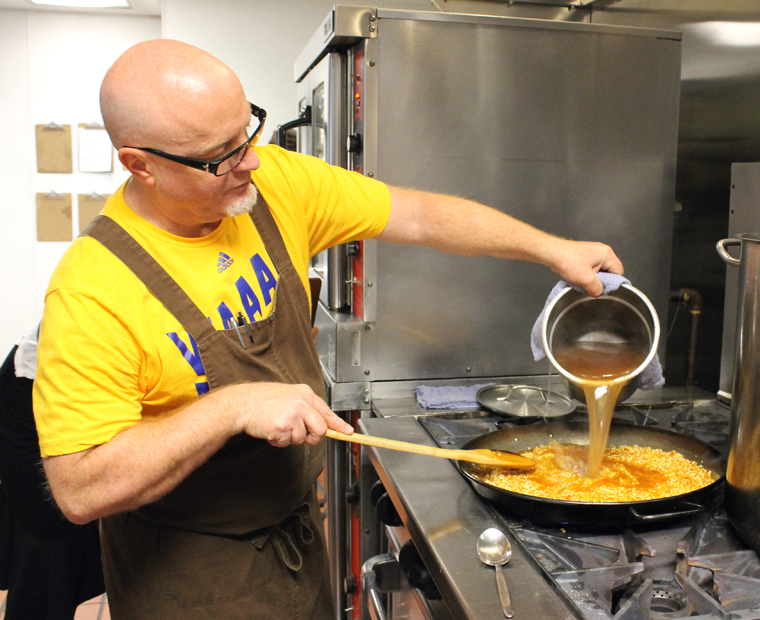 Once the broth, squid ink and rice combine with a quick stir, resist any urge to stir any further.

After a few minutes, he removes the pan from the oven and drapes pieces of rockfish and mussels over the top of the rice before placing it back in the oven for 3 more minutes. Meantime, he mixes up thinly shaved fennel, pickled onions and Pasilla peppers with lemon juice, salt and olive oil — a fresh salad garnish to finish the dish.

The prized part of any paella is the socarrat, the coveted crispy layer on the bottom of the pan, which he achieves by putting the pan back on a burner for a few minutes. It’s tricky when you are using squid ink, though, because it burns easily. That’s why he advises in the accompanying recipe to nix the socarrat at home if using squid ink. For other paellas without squid ink in them, after the paella is done in the oven, finish cooking it on the stove top on medium heat for 2 minutes, and a bottom crust should develop.

When satisfied with the paella, he garnishes it with the salad, along with house-made allioli and hot sauce. But we can’t dig in quite yet. Canales likes to have the paella sit and rest for a few minutes before serving it to allow “all the flavors to become friends with one another.” 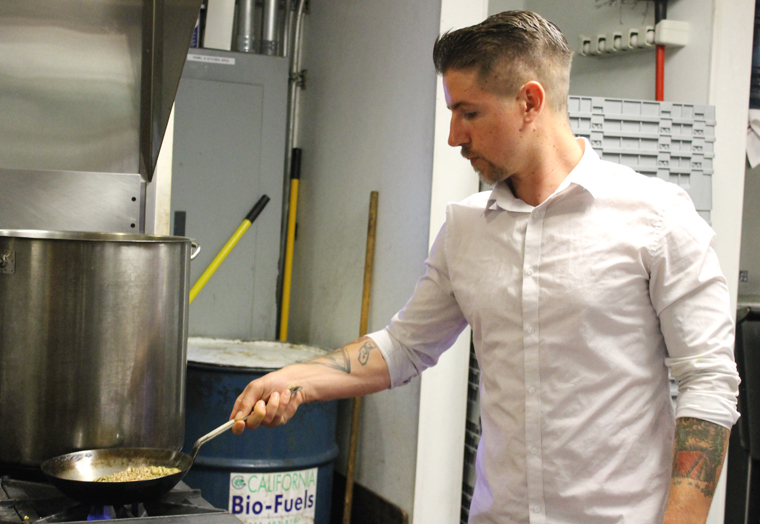 Bar Manager Chase Henriksen takes over the stove to make his turmeric tonic. 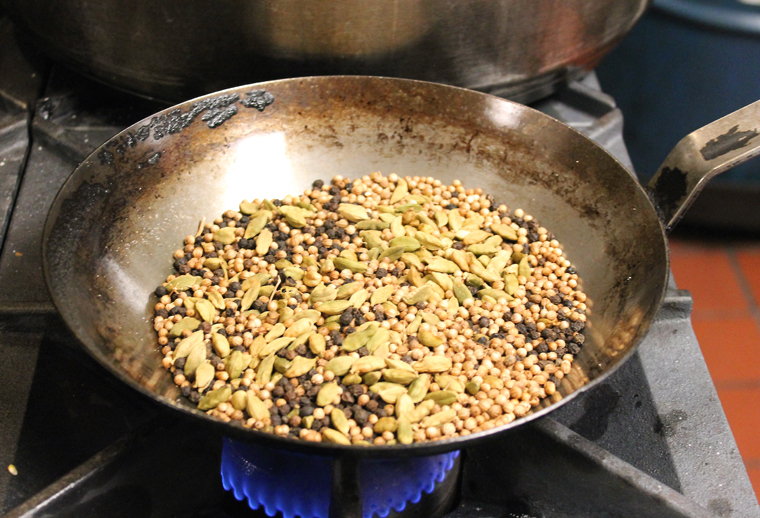 To go along with this magnificent paella? A turmeric cocktail created by Bar Manager Chase Henriksen. He shows us how he simmers sugar, water, fresh turmeric root, orange peels, lemongrass, cardamom, coriander and black pepper corns to create a syrup with a golden-orange glow.

It’s heady with spices and that dusty-citrusy flavor of turmeric. It makes for a delightful cocktail. It also is wonderful stirred into hot black tea, as I found out with a bottle he sent me home with. 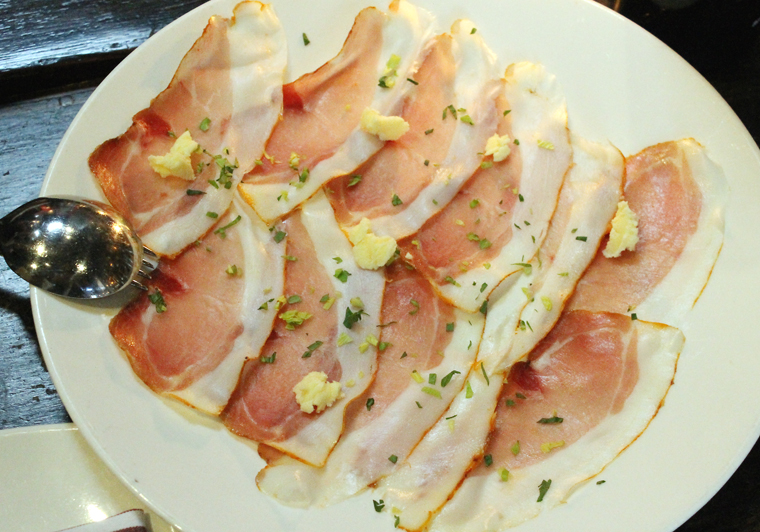 The cabbage salad that never leaves the menu. 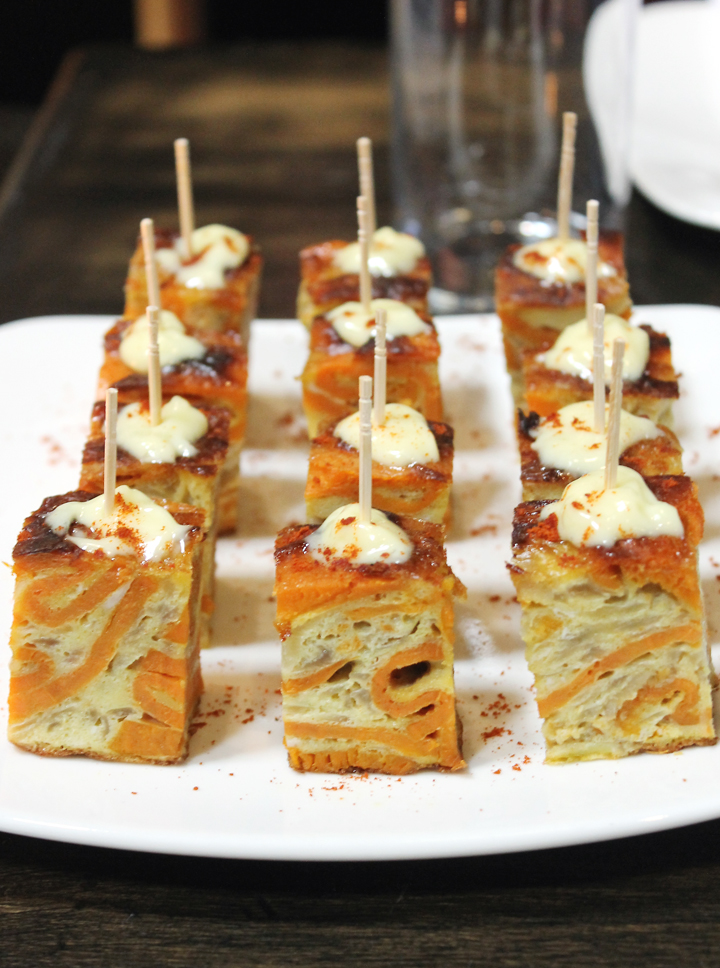 Spanish tortilla made with sweet potato. 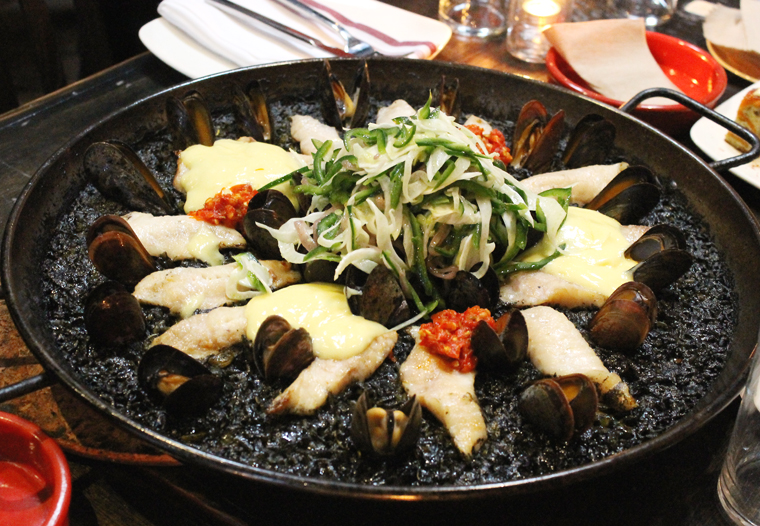 The star of the show: arroz negro.

Finally, it was time to sit down to paella, along with paper-thin slices of pork loin he has been curing with pimenton since February; signature ensalada de col, a mountain of shaved Savoy cabbage, Mahon cheese, green olives and pistachios; patatas bravas with aioli; and Spanish tortilla shot through with sweet potato.

For dessert, there were glasses of dry sherry, and servings of almond cake and chocolate flan. 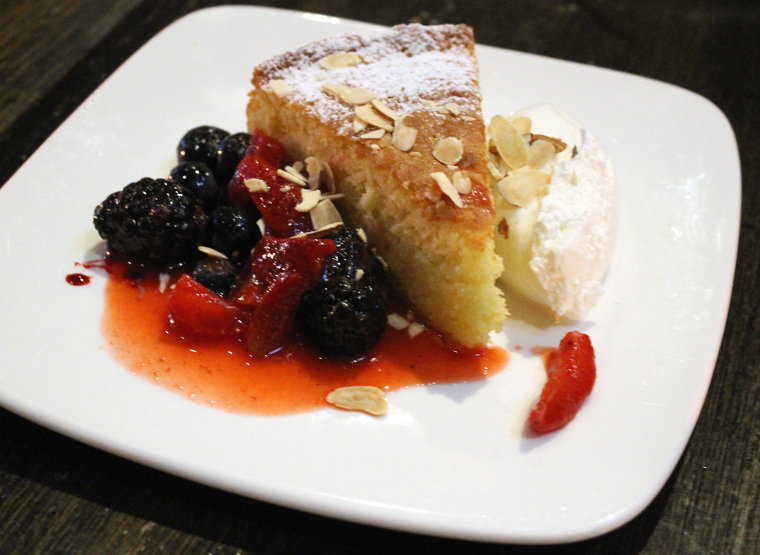 A tender almond cake with berries. 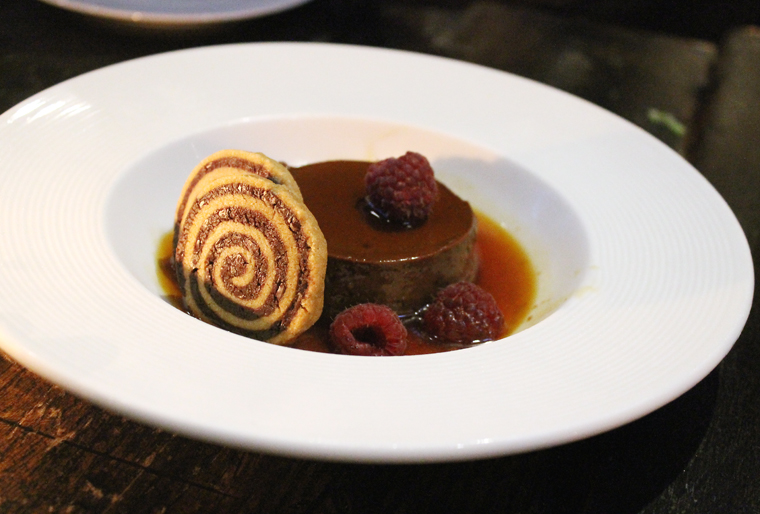 Canales sent us home with recipes, plus rice, sofrito, and chorizo to try our hand at making our own paella at home. I added fresh shrimp (a sample from the American Shrimp Company), cremini mushrooms, and a shredded kale salad to my version, which I improvised in a Dutch oven, since I didn’t have a paella pan at home. The paella I made at home two days later.

The method was straightforward, and the results incredible. So much so that I am sold on buying a real paella pan now. Astound your friends and family by making your own paella with the recipes below.

4 ounces tomato, peeled, seeded and chopped, with its liquid

1/4 teaspoon saffron threads, toasted and pounded to a powder

3 cups fish broth, homemade, warmed to a simmer (or half low-sodium canned chicken broth and half water)

1 tablespoon squid ink or cuttlefish ink, thinned with a tablespoon of white wine

Preheat oven to 450 degrees. If using a convection oven, preheat to 400 degrees.

In a 30 cm paella pan, make the sofrito by heating all but 1 tablespoon of olive oil over medium heat, and adding the onion and garlic. Season the contents of the pan with a generous pinch of salt and cook until translucent. Add tomato, and cook until tomato begins to dry out and begin to form a residue on the pan. Add saffron, lower the heat, and briefly stir to incorporate.

Next, add the rice and stir to coat thoroughly with the sofrito in the paella pan. When the rice begins to turn translucent and you can see the inner kernel, raise the heat to high and add all of the stock and the squid ink. At this point, it is important to taste the liquid in the paella pan and adjust the seasoning by adding salt. As paella is not stirred during the cooking, it is important that the seasoning be correct at this point. It should taste very well seasoned, but not overly salty, as the flavors will concentrate in the rice.

When the contents of the pan reach a boil, cook on the stove for 5 minutes, and then carefully place the pan in the preheated oven. Cook the paella in the oven for approximately 7 minutes. Season the fish fillets and scallops with salt. After 7 minutes, return the paella to the stove and place over medium heat. Arrange the fish and scallops in the paella, gently pushing them into the rice so that they are nestled. Return the pan to the oven for approximately 3 minutes.

While the paella is cooking, place the snap peas and the asparagus in a small bowl, and season with salt, a squeeze of lemon and the remaining olive oil.

When the paella is finished cooking in the oven, return the pan to the stove and place over low heat to allow any remaining liquid to cook off. Be careful not to finish the paella over high heat to develop a crust or the ink will burn. In all, the rice should take about 16-18 minutes to cook through.

To finish the dish, scatter the snap peas and asparagus around the pan, dollop the allioli and drizzle on the hot sauce. Let rest a couple minutes, then serve directly from the pan onto warm plates.

2 cloves garlic, pounded in a mortar and pestle with a little salt

Place the garlic and egg yolk in a medium-sized mixing bowl, and stabilize it by putting it on top of a damp kitchen towel on the counter. Begin whisking in the vegetable oil drop by drop until an emulsion is formed, then drizzle the remaining vegetable oil and all the olive oil. Add the lemon juice and season to taste with salt. The allioli should be noticeably garlic. Any leftover allioli and be stored, covered in the fridge, for a couple of days. 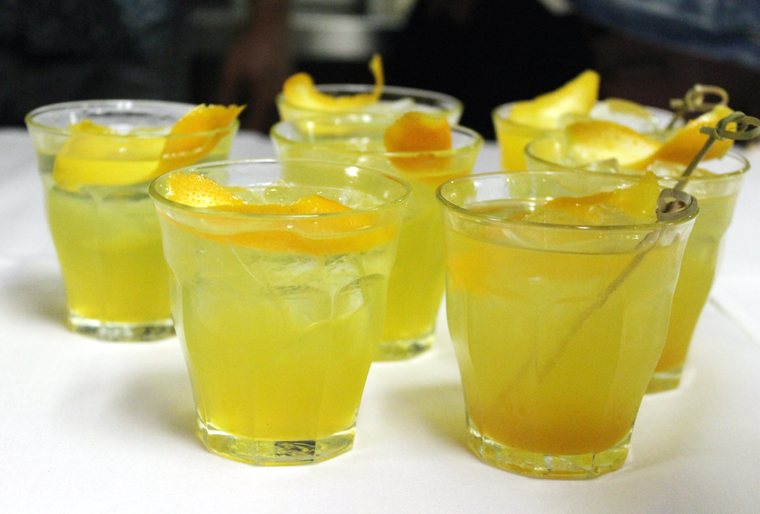 Add water to a large pot and place on medium heat on the stove. Add lemongrass and turmeric.

With a peeler, remove the zest from the oranges. Add peels to the pot. Squeeze juice from oranges into the pot. Add sugar and stir.

In a saute pan, lightly dry toast cardamom pods, coriander and black peppercorns on medium heat to release their aromas. Add them to the pot of liquid.

Heat until mixture boils; then reduce to a simmer for 20 minutes, stirring occasionally.

Strain mixture through a chinoise into a bowl. Allow to cool. Transfer tonic to a bottle and refrigerate.

To make a cocktail: Fill a glass with ice, add 1 ounce of the turmeric syrup, 1.5 ounces of quality white rum, and top with soda. Garnish with an orange twist.