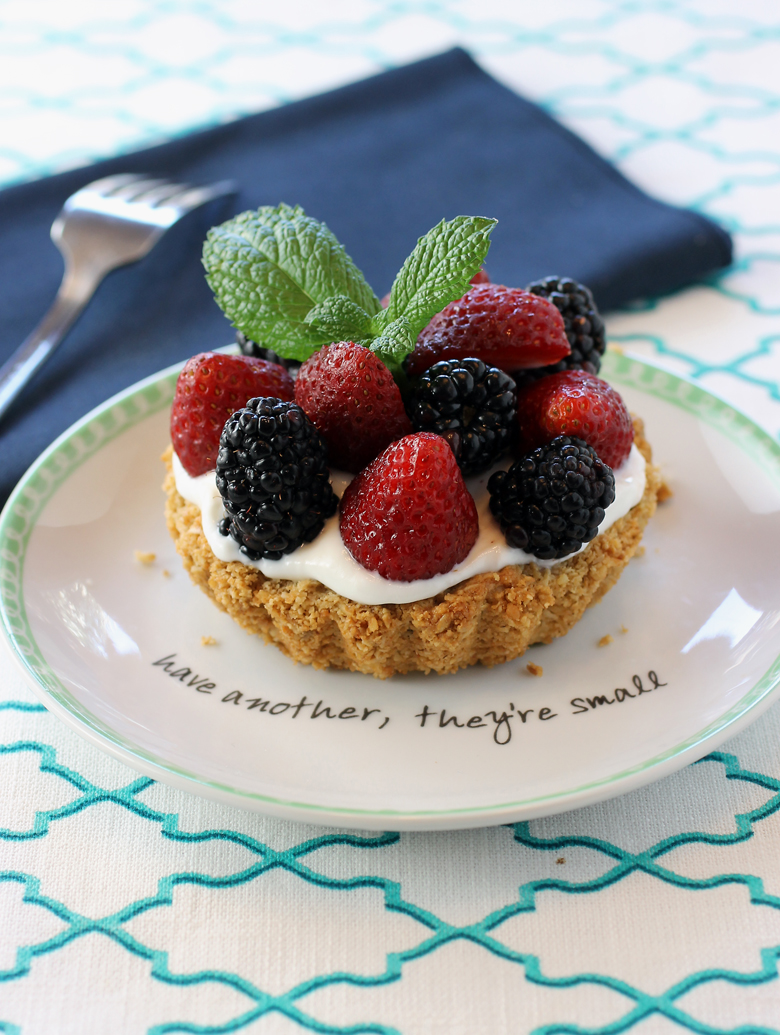 A delicious — if finicky and fiddly — little tart.

I think of this recipe as Beauty & The Beast.

It’s a beaut because once “Fruit & Yogurt Granola Tarts” get all dressed up with summer berries, peaches, plums and whatnot, they’re not only dazzling but delicious.

But it’s also a beast because even though these are extremely simple little tarts to make, they are a monster to get out of their pans without crumbling.

You’ve heard how the third time is the charm?

Well, not in this case. I actually made this recipe three times — that’s how determined I was to try to solve the problem of getting the tarts out of their mini pans intact. But even tweaking the recipe not once, but twice, still didn’t help.

So why am I still including the original recipe here? Because I love the notion of creating a mini tart crust out of oats, butter, maple syrup and walnuts. It really is like a granola bar with its extremely nutty, oaty taste. And because you are using Greek yogurt and fresh fruit to top it, it’s nearly guilt-free as far as desserts go. Well, at least in my book. In fact, I think it’s as tasty for breakfast as it is for a finale to dinner.

The recipe is from “Vegetarian Heartland: Recipes for Life’s Adventures” (Chronicle Books), of which I received a review copy. The cookbook is by Shelly Westerhausen, a photographer, recipe developer and blogger at Vegetarian Ventures. The book includes 100 meatless recipes for everything from drinks to main courses to desserts.

The dough for these mini tarts comes together in a minute in the food processor. Then, you just press the mixture into the tart pans and bake. You’ll notice that there is a generous amount of dough. This recipe creates very thick tart shells. In fact, they’re almost more like oat cookies, as there isn’t much of a depression in the center as you normally would have in other tarts. 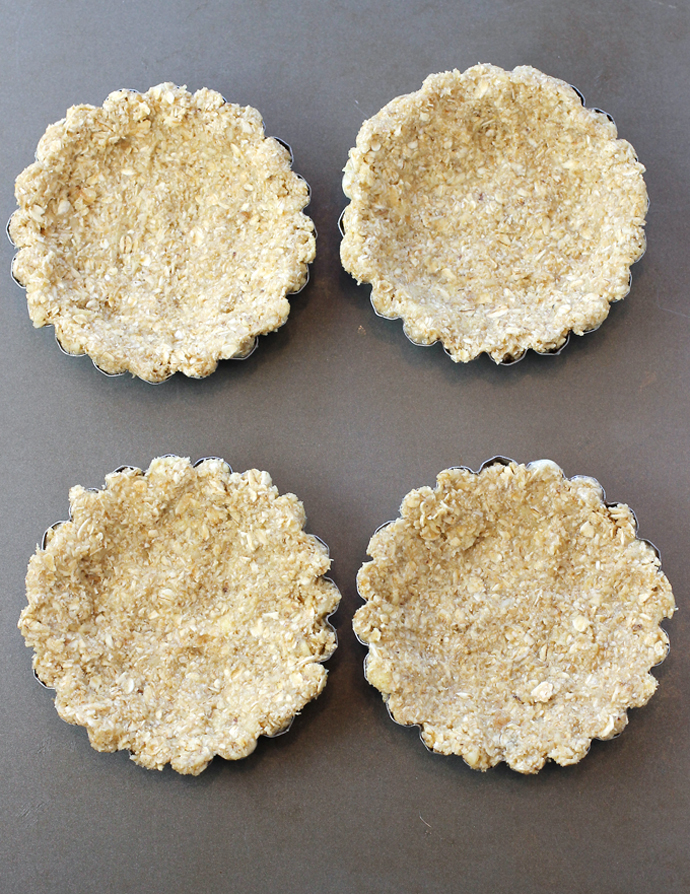 The dough is pressed into little tart pans before baking.

Do allow them to cool completely before attempting to unmold them. I did manage to get three of the four out of their pans without a hitch. But the fourth broke into three pieces. Inverting the molds is probably the safest way to try to get them out. I also tried using the tip of a knife to try to nudge them out, but that didn’t work all that well.

So after following the recipe as is, I tried making them a second time by using 1/4 cup less oats, thinking this might help the dough adhere together better. But no go. The tarts were still incredibly crumbly and difficult to unmold. I tried a third time, thinking that instead of adding in cold butter, I would melt it instead like you would do when making a graham cracker crust. Again, the results were not any better.

Granted, the recipe never specifically says to unmold the tart shells. But honestly, when’s the last time you made a tart and served it still in its pan like that? Though, in this case, you just might have to.

After all that, I would say it’s best to follow the original recipe — and just hold your breath. As much as I love the idea of serving this to guests for brunch, it gets dicey when you aren’t 100 percent confident that someone isn’t going to wind up with a broken one.

The good news? Even in pieces, the tart still tastes good. And the broken chunks do make for nice crunchy bits to sprinkle over fruit, Greek yogurt or ice cream in a parfait. 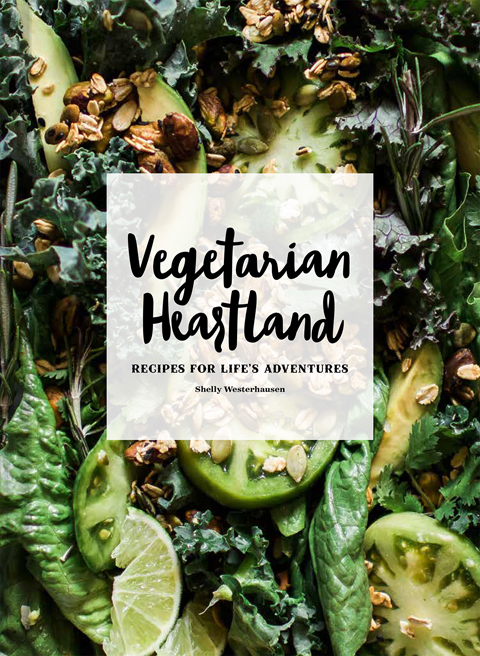 In a food processor, combine the butter, oats, walnuts, and maple syrup and pulse until a chunky dough forms. Divide the dough among the prepared tart pans and press into the bottom and sides to create an even crust

Bake until the crust has browned, 10 to 12 minutes. Remove from the oven and let cool. The crusts can be made up to 3 days ahead of time and stored in an airtight container at room temperature.

When the tart crusts are cooled, spread 1/4 cup of the yogurt over the bottom of each tart crust and arrange 1/2 cup fruit on the top. Serve immediately.

From “Vegetarian Heartland” by Shelly Westerhausen