If Michelin one-starred Rasa in Burlingame is the glam, attention-getting younger sister, then Saffron Indian Bistro in San Carlos is the dependable, dutiful older sister.

Before opening Rasa in 2014 to universal acclaim, restaurateur Ajay Walia debuted his first restaurant, Saffron in 2002.

It’s been quite a few years since I last ate at Saffron. But when I was invited in as a guest recently, I had a chance to see its evolution.

It still specializes in North Indian dishes. But the restaurant has definitely upped its game in the presentations. No doubt younger sibling Rasa had an influence in that. Easy to get to on San Carlos Ave. The dining room was nearly full later on that night. A steady stream of to-go food was picked up by patrons, too.

Moreover, three years ago, the dining room got a refresh. Before it was rather utilitarian. Now, the lights are dimmer, creating a warmer vibe. The walls are painted crimson and gold, and a contemporary chandelier casts a glow.

If you want a non-boozy refresher, the Mango-Ginger-Jito ($7) beckons. It’s a blend of mango juice and ginger, cut with sparkling soda. Just be forewarned, though, that it’s plenty sweet. The chandelier in the dining room. The restaurant has added a few small plates and tandoori specialties on the menu. Among the new items is Onion Bhaji, fried red onion pakoras drizzled with whipped yogurt, cilantro and tamarind chutneys. They were crunchy, redolent of sweet onions, and the perfect little bite to start off the evening with. Onion bhaji, new to the menu. Spiced Vegetable Cutlets ($8.95) are also a new addition. The patties of mixed veggies are dusted in semolina before being fried to a deep golden brown, then served with a flourish of spicy ketchup. They’re almost like vegetarian crab cakes.

It’s hard to ever resist Dahi Aloo Poori ($8.95), the crisp little shells filled with a mixture of potatoes and chickpeas, yogurt, and tamarind chutney. You put the whole thing in your mouth to enjoy a flavor explosion of sweet and tangy.

Masala Chicken Wings ($10.95) arrive nicely caramelized with crispy edges. They are deceptive, in that their heat builds slowly. But you will definitely feel the tingle on the throat once you’ve cleaned the bone. 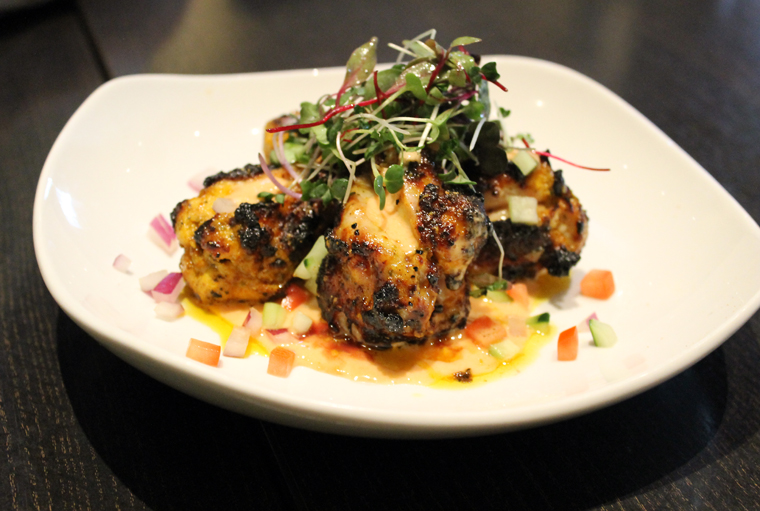 For light eaters, Tandoori Shrimp ($13.95) is a great option. The chile-cumin dry rub on the shrimps takes on a nice smokiness from the oven. Julienned red and yellow peppers add a cooling crunch, along with the pool of runny savory yogurt.

Lamb Rogan Josh ($16.95) brings tender cubes of braised lamb leg in a bowl of creamy spicy sauce that you’ll want an order of basmati rice ($3) to enjoy alongside. Braised leg of lamb with tomatoes.

Saffron’s Daal Makhani ($13.95) is a signature in which black lentils are slow-cooked for 24 hours with tomato, spices, butter and a touch of cream. It’s very rich, pleasantly spicy, and total comfort food, especially with more of that basmati rice to pair with it.

Onion naan ($3.95) is so good, we had to restrain ourselves from eating every last piece. The leavened, puffy, soft bread is filled with both red and green onions, which turn ever so sweet and irresistible. For dessert, kulfi falooda ($8) is so inviting in its tall glass with its range of colors and textures. House-made saffron kulfi is made with cooked down milk. It’s not aerated like American-style ice creams. Cut into tile-shapes and piled in the glass, the kulfi is creamy and dense, with almost a chewiness to it. Dig around to discover thin, slippery noodles, sweet basil seeds with the texture of chia seeds, and rose water syrup. It’s a sundae made for exploration.

Rasa hews more toward progressive Indian cooking, while Saffron is content to do classics well. And there’s nothing wrong with that.