Great China Restaurant Is Beyond Great The best Peking duck you just might ever have — at Great China.

The first clue that Berkeley’s family-run Great China is quite unlike any other mom-and-pop Chinese restaurant comes when you pull up to the front door.

Even on a Sunday evening at 4:30 p.m., you’re likely to find a line of about 30 people, waiting patiently for the doors to open a half hour later.

Once you step inside, you get your next clue. The restaurant may carry a moniker of generations past, but its interior is all clean-lines contemporary with concrete floors, exposed ducts,  a waterfall-edged wood bar countertop, polished wood tables, pendant lights and oversized abstract canvases on the walls.

The restaurant was established in 1985 by Mike and Jenny Yu. It is now run by their sons, James and Tai, the latter who designed the restaurant space after a catastrophic fire destroyed the original location a few blocks away in 2012.

James Yu and Wine Director Mark Yatabe are responsible for the next feature that sets Great China way apart — its wine list. This is no short list shoved behind a plexiglass holder on the table. This is a world-class list that not only has depth and breadth, but actually reasonable markups.

James Yu, a former sommelier at Rivoli in Berkeley, admits his passion for wine led him to beef up the Great China selection to what it is today. He’s a fan of French Burgundy, and it shows in the pages-long list of staggering offerings including Château de la Tour, Vieilles Vignes, Grand Cru, 2013; Emmanuel Rouget, Grand Cru, 2009; and Nicolas Potel, Grand Cru, 2006.

Yes, Dorothy, you are not clicking your heels at just any Chinese restaurant. Is it any wonder that Great China has a Wine Spectator Award of Excellence? Double Skin — a mix of textures, meat and seafood all tied together with a tangy, sharp dressing.

Sure, the prices are higher than your neighborhood Chinese joint that probably uses a little too much cornstarch. But at Great China, the cost is justified by the skill of preparation of the carefully sourced ingredients, such as sea cucumbers from Alaska as opposed to cheap ones from China that James Yu pretty much said that nobody with any standards would ever use.

A few weeks ago, my husband and I, along with a couple of friends enjoyed the top-notch fare at Great China, paying our own tab, though James Yu graciously poured us some of his favorite wines by the glass to try gratis.

Everyone comes for Great China’s Peking Duck ($44.95), which is considered the standard. Even Chef Evan Rich of San Francisco’s Rich Table and RT Rotisserie rhapsodized about it when he told me a week earlier about taking his wife Chef Sarah Rich and their children there for the duck.

A great plus is that you don’t have to order it ahead of time when dining here. It comes to the table deboned, and cut into neat slices. The prized skin is as crisp and thin as the best potato chips, with the fat underneath completely rendered out. The meat is succulent, with nary a tough or dry bite. It comes with a stack — and I mean a stack — of 24 delicate pancakes to stuff with meat and skin, and scallions and plum sauce, before rolling up to enjoy in bliss.

Before that grand plate, though, you also must try the unusually named Double Skin ($18.95 for a small; $26.95 for a medium; and $34.95 for a large). It is a combination of chewy mung bean noodles, carrots, cucumber, egg crepe, calamari, shrimp, sea cucumber, onions, mushroom and pork that gets mixed at the table by your server.

It’s all texture, vibrant freshness, and a pop of piquant heat from Chinese hot mustard in the dressing. Nobody at our table even normally likes sea cucumber, the sea slug with a rather slimy texture. But here, it’s minced, so the pieces combine with everything else for greater subtlety. It’s a dish you can’t stop eating. 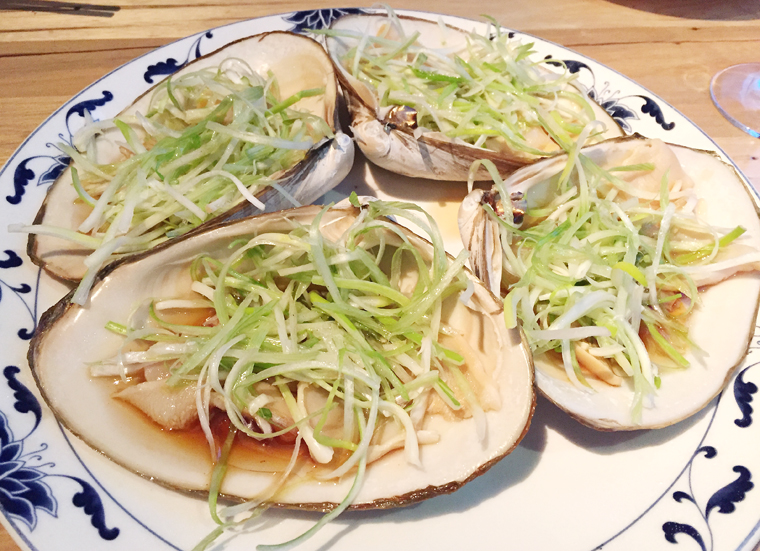 Steamed surf clams ($9.95 per pound) is another must-order. The huge clams, which are split in half, so that each one can serve two people, hail from Washington. The restaurant steams the clams with mirin and soy sauce, then gives them the traditional Chinese whole-fish finish by garnishing with plentiful scallions before pouring hot oil over just before serving.

They are extraordinary. The glories of the Peking duck aside, I would return to Great China just for these surf clams again. Sweet, tender, plump yet ever so gently toothsome, they are just incredible. Best yet, they are served in their sizeable shells, so when you are done with the clam part, you will want to fill that shell with rice to soak up all that delicious juice and hot oil. James Yu says diners often like to do that with the garlic fried rice, and I can definitely see why.

Even something as simple as Chinese String Beans with Minced Pork ($14.95) turns into something more elevated here when it’s done with a savory mixture of pork topping perfectly al dente green beans. 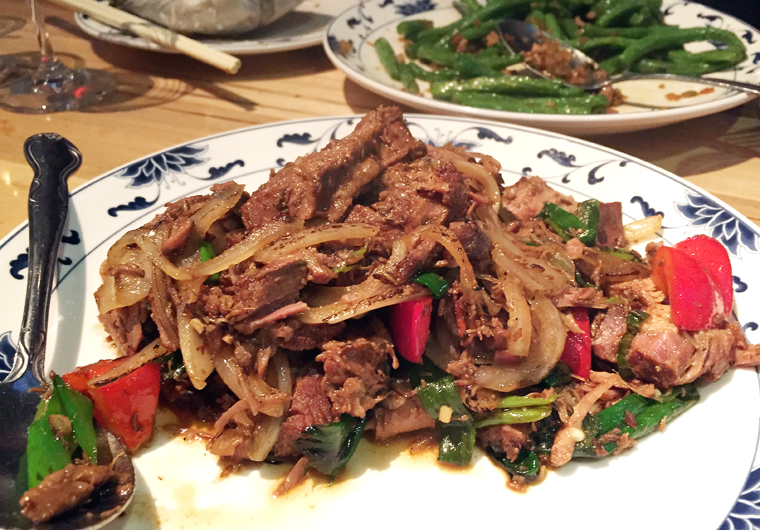 Another popular dish is Cumin Braised Lamb ($17.95), which you can get spicy or non-spicy. We chose the latter, as one of my dining companions prefers his food mild. The braised lamb was ropy yet tender, and so full of fragrant cumin that you could smell the lovely spice even before the dish hit the table. A mound of rich pork belly. Mei Cai Ko Ro ($19.95) is thrice-cooked pork belly, which arrives glistening with a quivering thick fat cap. It’s as rich and hearty as you can imagine. There’s a raft of diced pickled mustard greens to ever so slightly lighten the dish. James Yu helped even more by bringing out a dish of Napa Cabbage with Dried Shrimp ($14.95), which he said would go well with such a heavy porcine preparation. And it did, with the natural sweetness of the crunchy cabbage getting a deeper flavor from the salty, umami hit of the preserved shrimp.

For a final treat, James brought out small glasses of his own Chinese Baijiu. It’s his first year aging this specialty clear, high-octane liquor that has a tradition dating back to 7,000 BC.

His Baijiu is barrel-aged in a single-malt bourbon cask. He adds Chinese rice wine to bring the proof down a bit. Previously, it was 116 proof (!!!); now it is 80 proof. It is still POTENT with the fragrance of vanilla, spring flowers and Schnapps, definite sweetness and viscosity, and notes of salt water taffy and sweet preserved Chinese plum candy. He’s also experimenting with aging some in a Burgundy barrel and another batch in an Oloroso sherry one.

Great China surprises by showing just how so many mundane menu items can gain new life just by going the extra effort. So much so that my friends half-joked that they’d come back to order sweet and sour pork just because they have the utmost faith that Great China will find a way to finesse that hackneyed standard. Something tells me, they won’t be disappointed if they do. 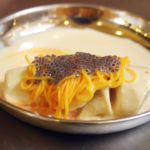