A dessert that’s a dark beauty.

It was a dark and stormy cake.

OK, maybe not quite.

But “Molasses Bundt Cake with Bourbon Caramel Sauce” is definitley dark and deliriously delicious. And it’s so full of wintery warm spices, that you could definitely picture yourself cozying up to a big slice on a stormy night.

The recipe is from “Baker’s Royale” (Running Press), of which I received a review copy. The cookbook is by Californian Naomi Robinson, a self-taught baker behind the popular BakersRoyale blog. Bundts are among the easiest cakes to make, which is what you want especially during these harried holidays, which always seem to come around quicker every year.

The batter for this moist cake is full of ginger, cinnamon, allspice, cardamom and black pepper, in addition to molasses and brewed black coffee. In fact, the molasses and coffee give the cake a flavor almost akin to stout beer. A moist cake with the taste almost of stout beer.

The bourbon caramel sauce is easy to make, but just don’t take your eyes off of it as the sugar syrup cooks because you don’t want it to burn as it starts to take on color. You want to monitor it carefully until it reaches a dark amber color. That hue is key because it gives the caramel sauce depth and a whisper of slight bitterness that nicely offsets its sweetness. It’s not an overly boozy tasting sauce, either.

The only change I made was to note that the caramel sauce should be cooled and refrigerated for at least an hour to thicken up before being drizzled on the cake. Even so, you’ll find that the caramel will gloss the cake, but a lot of it will slide off. The best thing to do is place the cake on a rack with a big plate underneath. That way, as you drizzle on the caramel, the excess will run off onto the plate. You can then scoop up the caramel and drizzle a second coating on the cake or just serve the extra caramel on the side when you slice the cake.

For a final flourish, I decorated the cake with a few pecan halves.

It’s the kind of cake that makes you wish for long nights. Venture over to the dark side this holiday season.

For the bourbon caramel sauce:

To make the cake: In a large bowl, whisk together the flour, sugar, ginger, cinnamon, allspice, cardamom, pepper, salt, baking soda, and baking powder. In a second bowl, using an electric mixer on medium speed, beat together the oil, molasses, coffee, eggs, and vanilla. Stir the wet ingredients into the dry ingredients, mixing until just combined.

Pour the batter into the prepared pan. Bake for 35 to 40 minutes, or until a toothpick inserted into the center comes out clean. Transfer to a wire rack to cool for 30 to 40 minutes before inverting the pan to release the cake.

To make bourbon caramel sauce: Place the sugar and 1/4 cup of water in a small saucepan. Cook, stirring, over medium-high heat, until the sugar is dissolved. Use a pastry brush to wash down any sugar crystals from the sides of the pot. Bring to a boil, about 3 minutes. Once boiling, do not stir directly. Instead, using the long handle of the pot, tilt and swirl the mixture to distribute the heat, evenly. At 7 to 8 minutes, the color will start to change. Watch the mixture closely and continue to tilt and swirl the pan to even out the color. Continue to cook and swirl until the mixture is a dark amber, 1 to 2 minutes after you see the first amber color. Remove from the heat immediately. Add the cream carefully, as it will bubble and splatter. Add the butter and stir until fully dissolved. Stir in the bourbon and salt. Allow the caramel to cool, then refrigerate to allow it to thicken, at least 1 hour. The caramel can be made 1 week ahead and kept covered and refrigerated.

To assemble, place the cake on a rack with a large plate underneath. Drizzle the caramel sauce on top of the cake. A lot of it will run off the cake, which the plate will catch. The extra caramel can be used to garnish slices of the cake when serving. 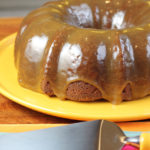 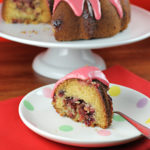 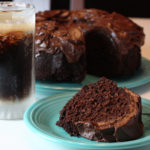 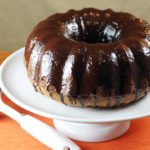