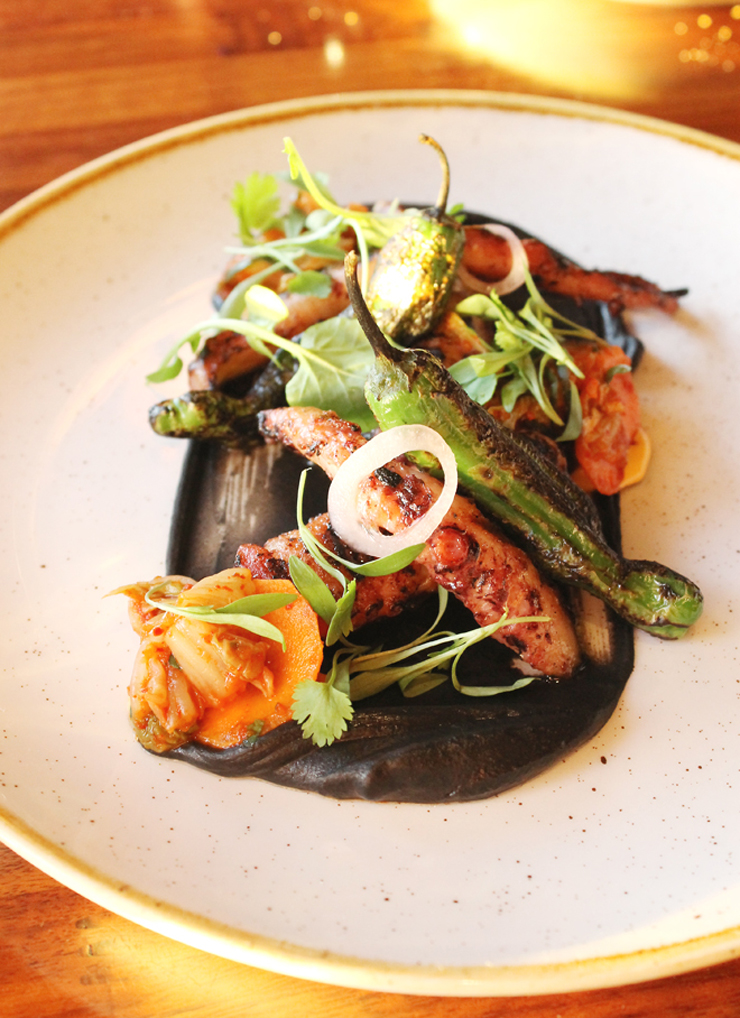 That’s the last time I stayed at Timber Cove, a resort that sits on 23 acres of breathtaking coastline between Bodega Bay and Sea Ranch.

Perched on a bluff right over the ocean, the inn’s setting has always been jaw-droppingly beautiful. But the rooms, refreshed here and there haphazardly over the years, were stuck in a time-warp. There was too much dark wood that made everything feel a little cabin-claustrophobic, not to mention the fact there was a dark green triangular bathtub out in the open in the corner of the bedroom for some odd reason.

But fast-forward to 2014, when new owners took over, and closed the hotel in 2016 for a sizeable 6-month renovation of not only the main building, but all the rooms. Originally built in 1963 from a design by a protege of Frank Lloyd Wright, Timber Cove reopened fully at the end of 2016 still possessed of its classic architecture, but looking not only restored and refreshed, but downright fun and cool. 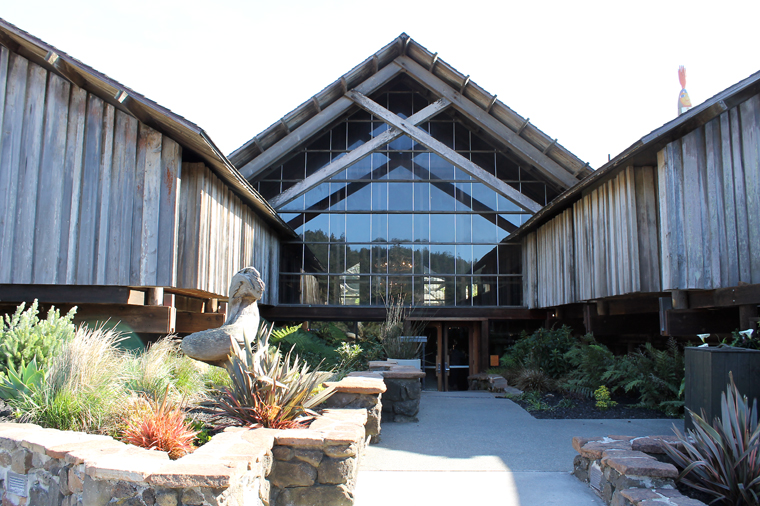 The entrance to Timber Cove. 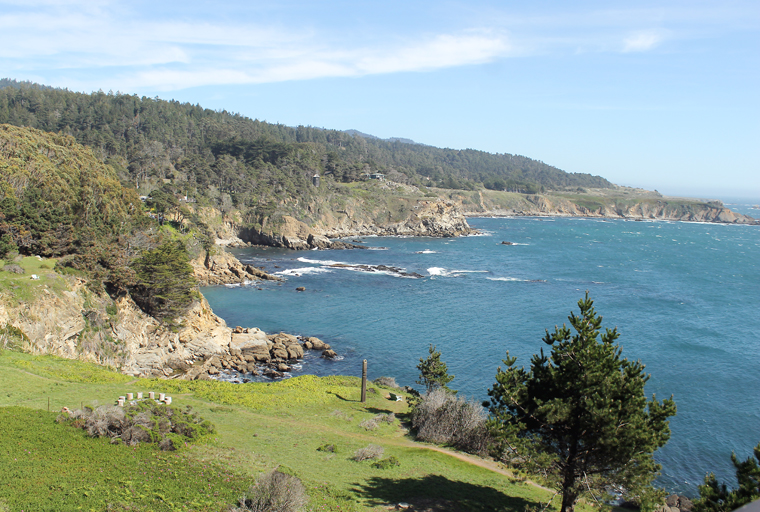 The view from the resort.

That’s what I found when I was invited back as a guest of the inn earlier this month. Renowned architectural firm Gensler worked with celeb designers, Robert and Cortney Novogratz of The Novogratz firm in Los Angeles. If you caught the Novogratz’s HGTV show, you’ll recognize their breezy California-casual style here.

They’ve injected whimsy throughout, as well as playful retro touches in a nod to the era in which the hotel was originally built. The patio right outside, which is partially shaded to help ward off the fierce winds that can blow off the ocean, features a ping-pong table, pool table and porch swings that just beg you to sit for awhile. 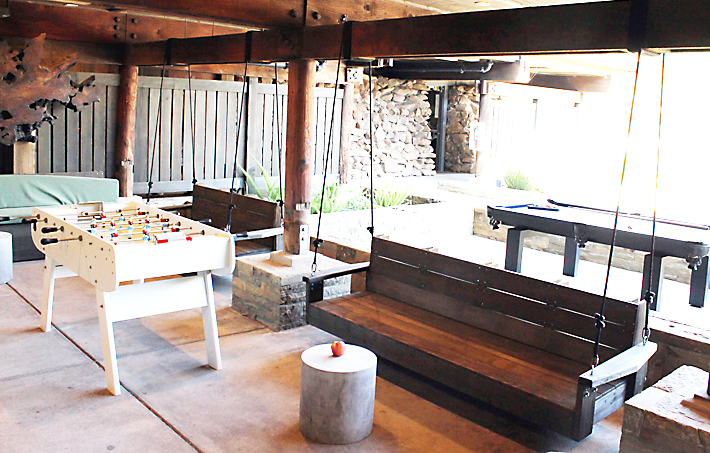 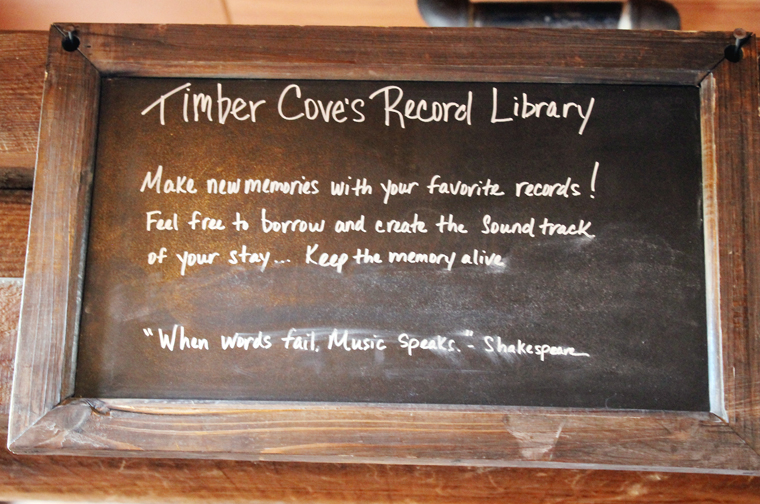 Right across from the check-in desk in the lobby is a collection of records. Yes, real LPs that you can borrow and bring back to your room, as all of the rooms come equipped with a real record player. When’s the last time you listened to music that way, right?

Even the phone in the room looks like an old rotary one, even if it really is push-button. The fridge in our suite boasted that same old-school look, too. The record player in the room. The phone in the room.

Where the rooms were once dated, they now meld modernity and nostalgia seamlessly with a cozy, clean, bright vibe. There are now 46 rooms in total, down from the previous 49, as a few suites were created in the remodel. 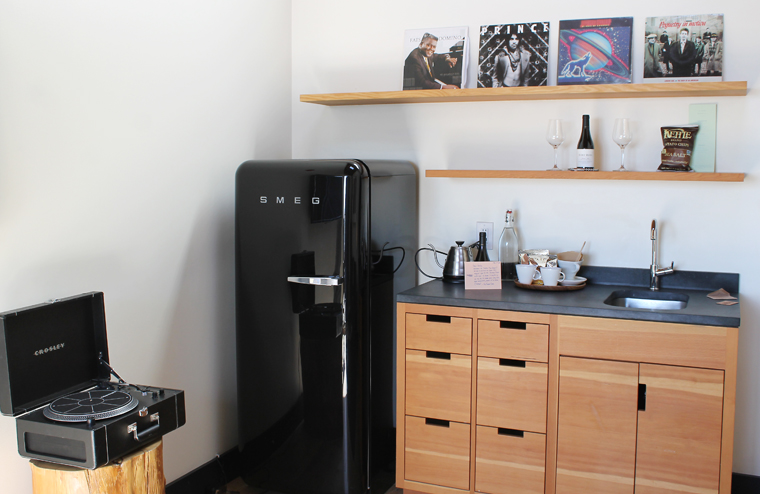 The mini kitchen in our suite. The sitting area in the suite, complete with gas fireplace and Nest thermostat. 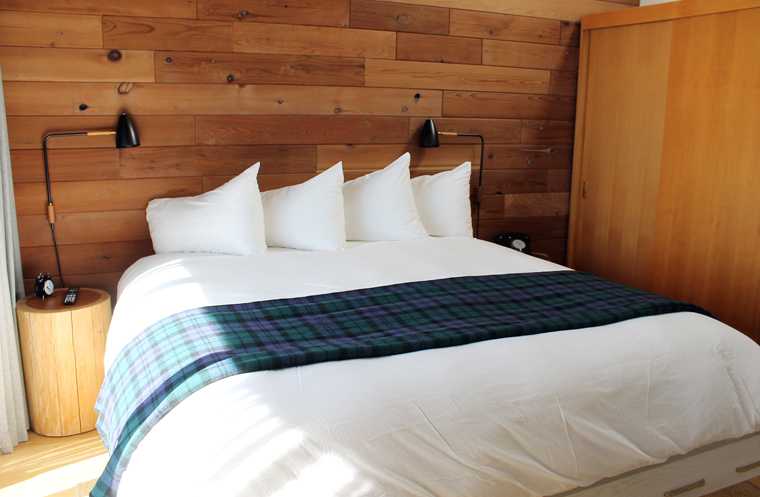 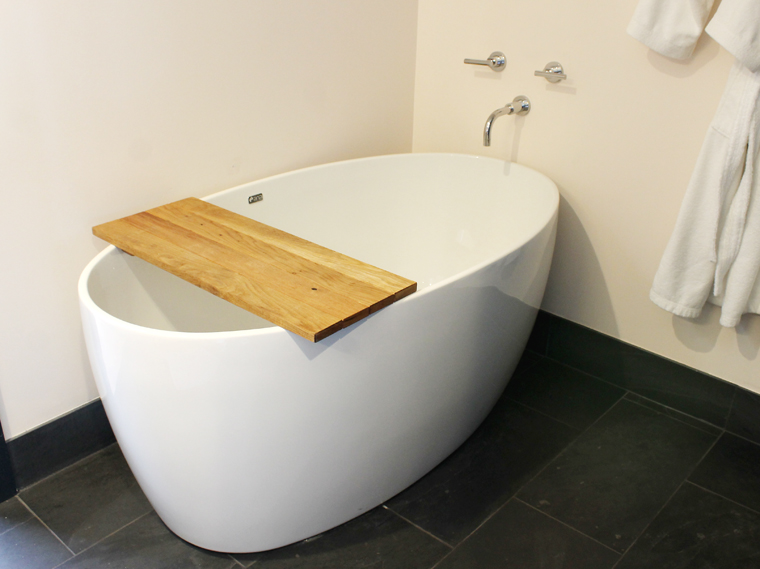 Among the other new additions: the Ansel Adams Room, complete with its own private deck, is a comfortable private events space that’s used regularly for small weddings and corporate gatherings. You’d never know the Coast Commune Room used to be the dry storage room for the restaurant. Windows have been added that overlook the ocean. A long, raw-edge conference table was added, along with wine racks, making this a perfect spot in which to do some vintage tastings. 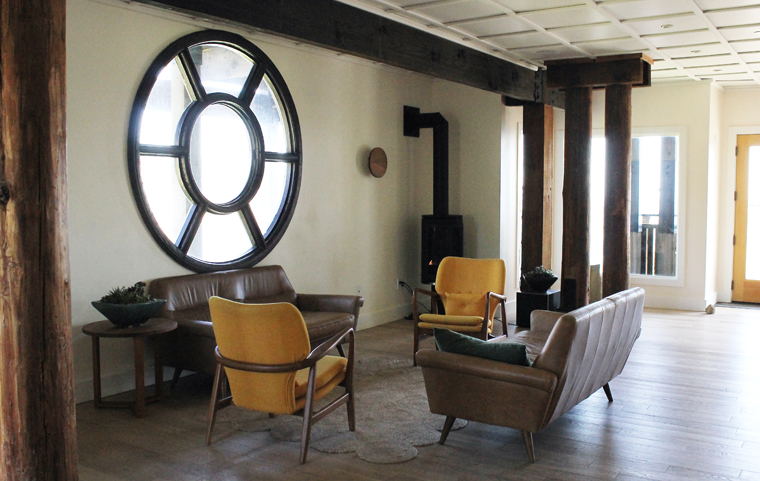 The Ansel Adams Room. The picturesque coast was a favorite place for Adams to take photographs. 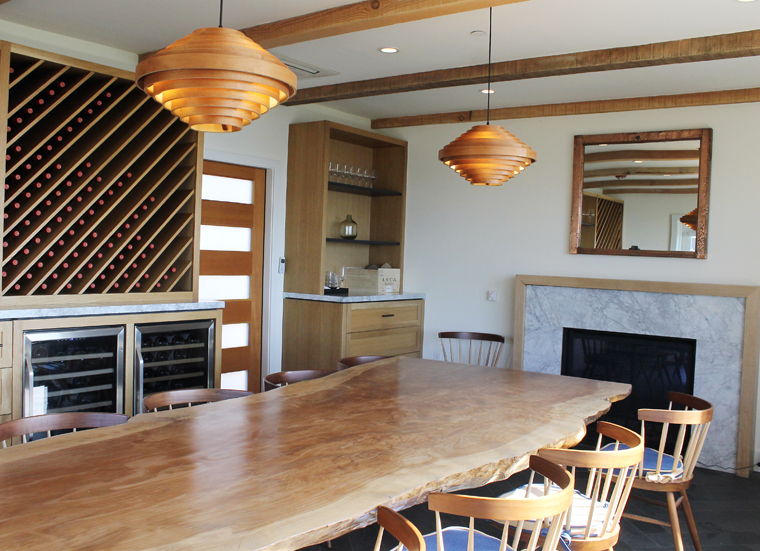 There are miles of trails to hike. A short one will take you to the base of the area’s most famous landmark, the stunning 93-foot tall “peace obelisk,” designed by Benjamino Bufano. If that’s too strenuous, just take a load off by the fire pit at night to watch the sunset. 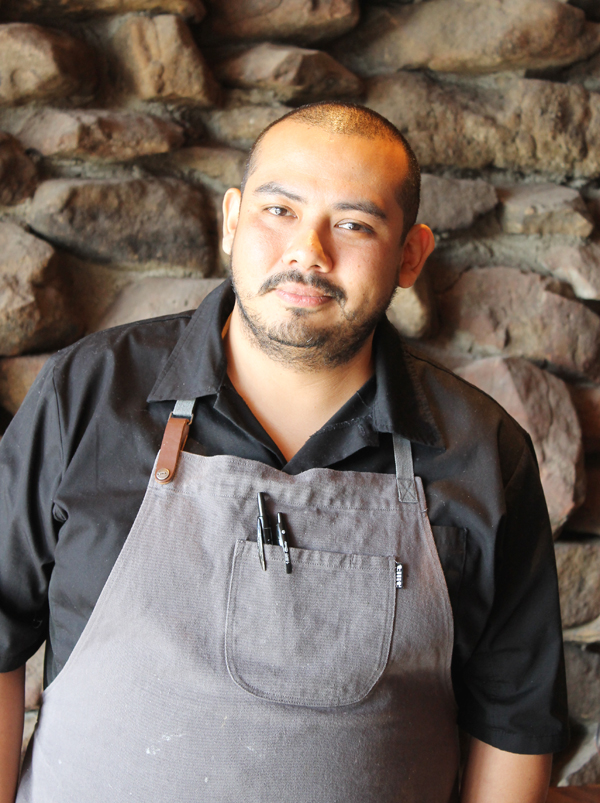 Chef Paulo Mendoza, who worked with celeb Chef Richard Sandoval for four years including at his Aqimero in Philadelphia, oversees the 64-seat Coast Kitchen restaurant. He initially came here to just help the restaurant reopen, then return to San Diego, where he grew up. But he quickly fell in love with the area and stayed.

“I came here and hadn’t seen the ocean in two years!,” he says. “I looked around, and suddenly it just all made sense.” 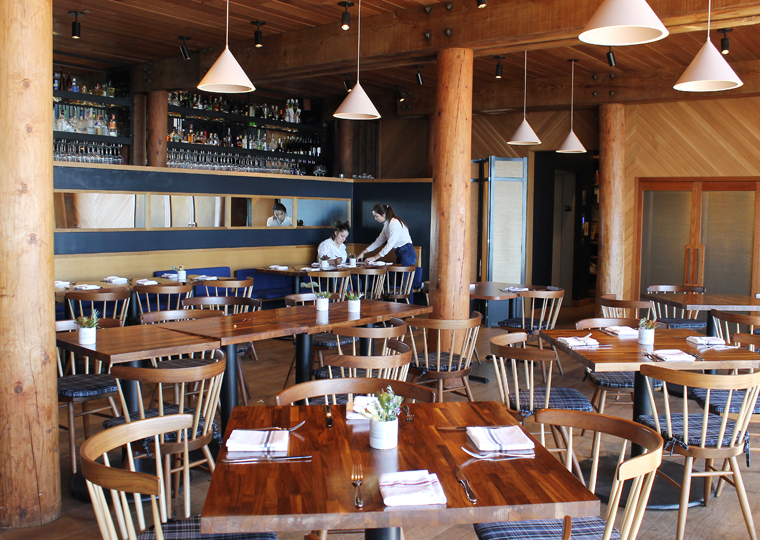 The dining room. Note the back wall, which used to have a rock facade, but has now been toned down.

Because the restaurant’s isolated location, Mendoza can’t get things easily delivered, forcing him to seek out seasonal products from nearby farms — something he relishes. He even started making his own salt from the ocean water.

The old restaurant adage is that the more spectacular the view, the sorrier the food. That is definitely not the case here. A wall of windows gives you a front-row seat to the sun setting over the ocean. And diners are known to leap from their seats to head outside to capture the moment on their cameras. But the food will have you racing back to your seats to enjoy every bite.

Mendoza has cooked with the likes of Roy Yamaguchi, Masaharu Morimoto and Brian Malarkey, and his experience shows throughout the inventive touches on the menu. Cooking at a resort means that Mendoza has to satisfy a range of taste buds, both tourists and locals, both adventurous diners and more staid ones. His Smoked Trout Chowder ($12) is a good case in point. It’s his way of shaking up clam chowder just enough. It’s made with smoked trout that suffuses the chowder, which is nicely brothy in body, not pasty thick like so many other ones. The showmanship comes in the form of the crisped up trout skin crumbles that are almost like croutons. It’s exactly the kind of soup you want to sink a spoon into after a long hike. 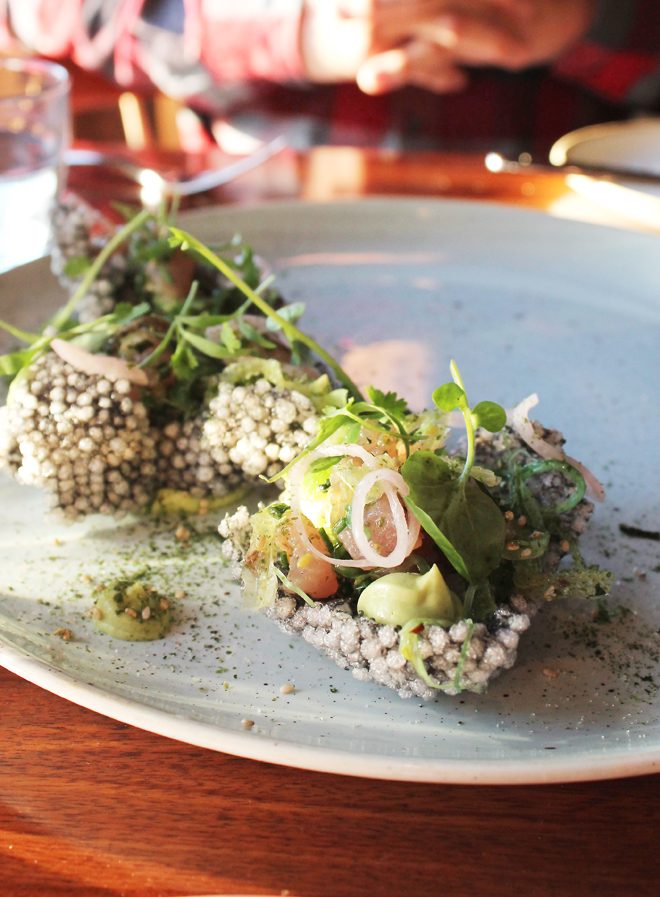 He’s even more brazen with the Ahi Tuna Tartare ($16). The diced raw tuna gets a load of flavor from jalapenos, avocado, habanero sesame oil and seaweed salad. But what it’s all piled on top of really steals the scene: squid ink “chicharrones.” He learned how to make them from a chef friend. I’ve never seen anything like them. He mixes tapioca with squid ink, dehydrates the mixture, and then fries it off to create crispy shells that have a pebbly black and white look. They are airy and crackly crisp, very much like rice crackers or shrimp chips. And they will blow your mind.

The next dish takes on the flavors of Korean kimchi pancakes, only it’s a dish of Charred Octopus ($18). Cooked sous vide before being grilled, the octopus is super tender and smoky tasting. The tentacles like on a a thick puree of black beans that carry a hit of heat. The kimchi is made in house but purposely not fermented as long as it would be traditionally because Mendoza prefers it less funky and more fresh tasting. 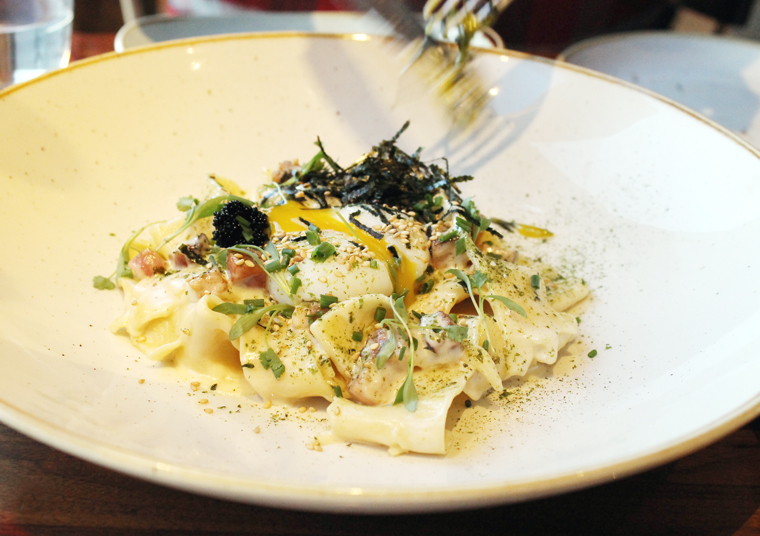 With a perfect runny egg.

Anchor Bay Uni Carbonara ($29) goes Asian here. The tangle of fresh paparadelle-wide pasta is finished with miso, furikake, nori uni, Neuske’s bacon, flying fish roe and a 62-degree egg. You break the egg and let the golden yolk ooze out to enrich everything like a traditional carbonara.

The bacon is the predominant flavor with the nori adding more meaty umami flavor. The uni is incredibly subtle, so much so that I wouldn’t necessarily have known it was there unless I read it beforehand on the menu. Mendoza puts the uni and the miso in a compound butter that is mixed with the hot noodles. When he first developed the dish, he put a lot more uni in. But it apparently was too much for his clientele, so he toned it down. What a pity. 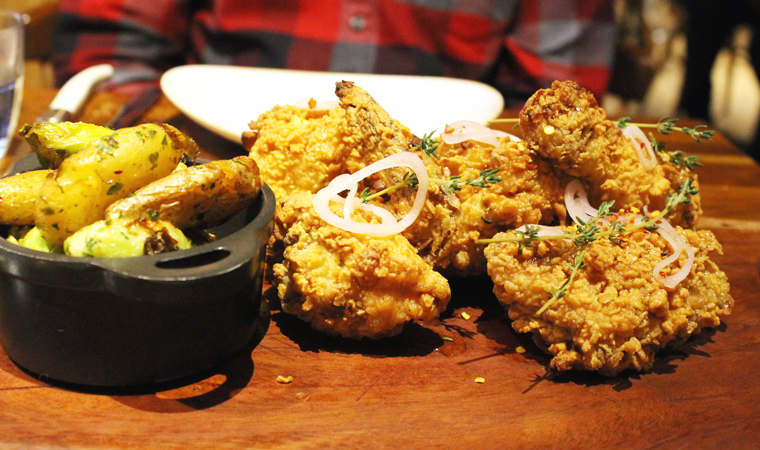 The TC Fried Chicken ($26) is one of the most popular dishes. Mendoza jests that it’s “Roscoe’s meets the woods.” No, there’s no waffle accompanying this one. But the sizeable portion of chicken (more than half a bird), gets brined for two days before frying, and arrives on a big wooden board with flourish. It’s moist and juicy inside, with a nice crunchy battered exterior. And best yet, like a pearl necklace with a little black dress, this chicken gets just enough pizzazz from a drizzle of honey-garlic-chili-thyme honey to make it pop. Brussels sprouts and fingerling potatoes come alongside for the ride. 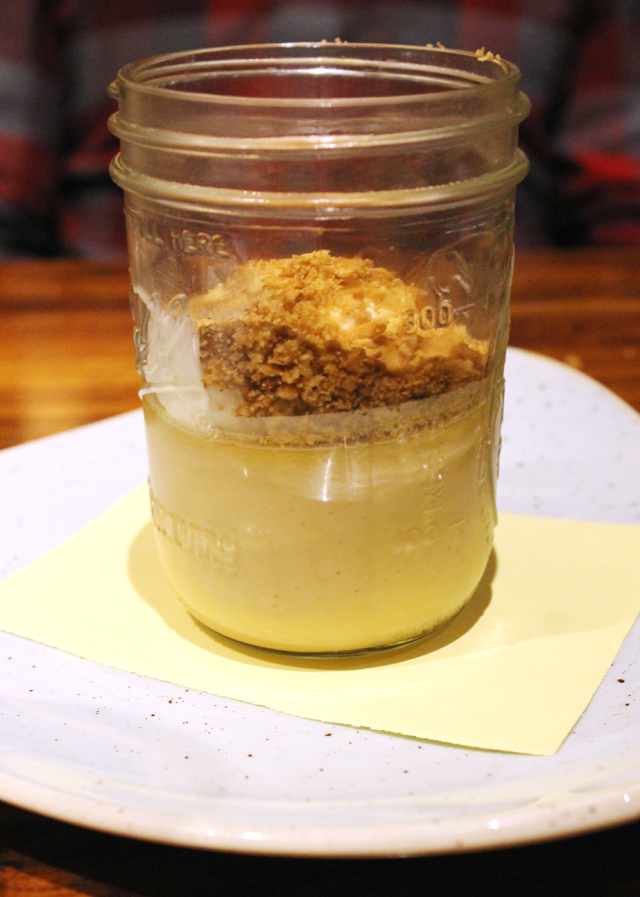 Mendoza does the desserts, too, and his butterscotch pot de creme ($9) definitely satisfies. It’s a generous portion, topped with a vanilla cookie crumble and a fluff of mascarpone-whipped cream.

The next day, it’s back to the restaurant for breakfast. The Belgian Waffle ($12) is actually not one big one, but four smaller ones, dominoed on the plate with fruit preserves, a mound of whipped cream and your choice of sausage or bacon. 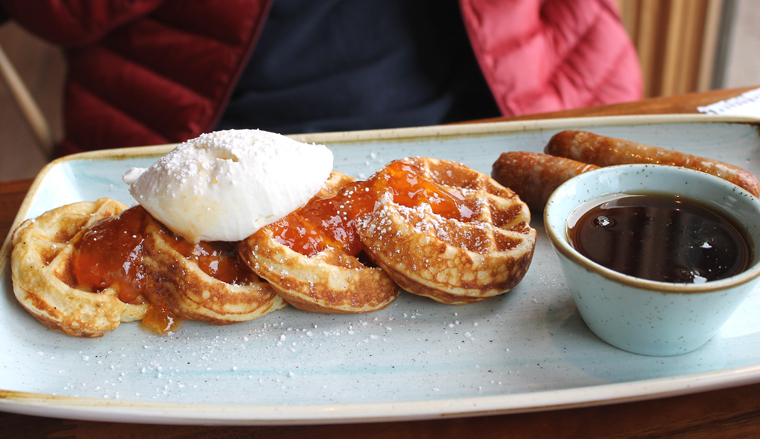 Steel-cut oatmeal with a big scoop of brown sugar-butter.

The Steel Cut Oatmeal ($8) comes topped with a huge scoop of brown sugar-butter. Perhaps too much butter, actually, but you can just push much of it to the side. I ordered a side of fruit with it, and the kitchen was kind enough to mound the berries on top of the oatmeal.

Not a bad way at all to start the day, especially with a view of the ocean and a crystalline blue sky.

It’s funny to say that a 55-year-old resort has grown up. But that’s how Timber Cove feels now — as if it has finally come into its own to show off the very best version of itself. 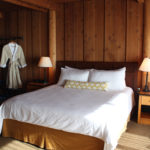 More: How Timber Cove Once Looked