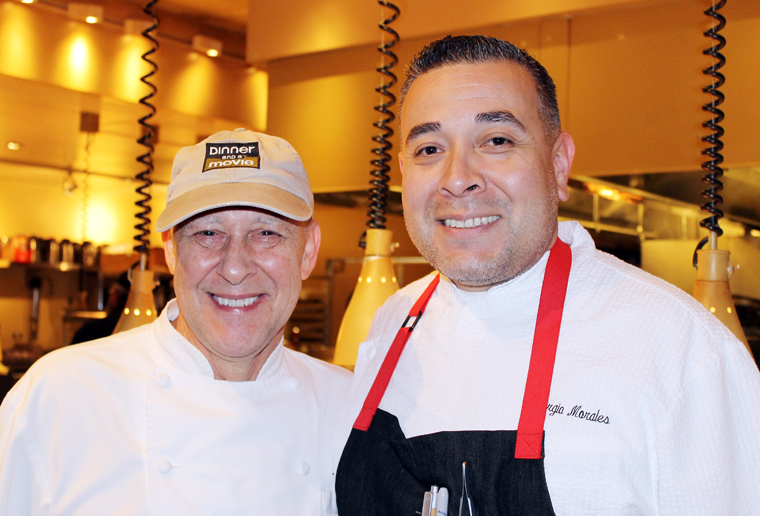 Thursday’s celebratory dinner began with an amuse of fried artichokes with Meyer lemon aioli, paired nicely with Cakebread Cellars’ Sauvignon Blanc Napa Valley 2016. The crisp, lightly battered heart with the creamy, thick sauce clinging to it was as addictive as potato chips and dip. 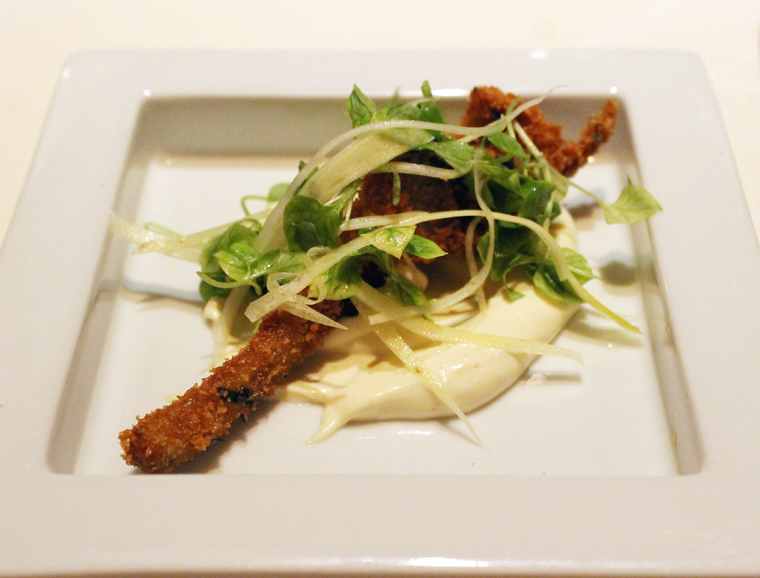 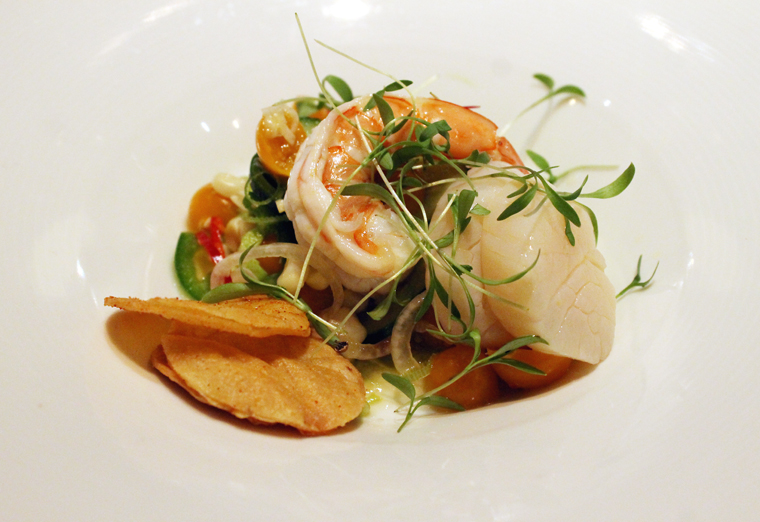 A ceviche of Hokkaido scallops and Gulf blue shrimp was especially wonderful. The plump seafood had been marinated in passion fruit, a nice change of pace from the usual lemon or lime juices. Roasted corn kernels added another dimension of sweetness, while a generous hand with the jalapeno rings added big pops of spice that could be dampened by the avocado puree.

Tortellini filled with house-made ricotta was one of everyone’s favorites. Perfectly formed, the tortellini were finished with a paprika-spiked corn pudding, beech mushrooms and pickled ramps that added just the right amount of zingy acid. Cakebread “Two Creeks” Pinot Noir Anderson Valley 2015 had a nice backbone of earthiness to complement its fruity berry forwardness. 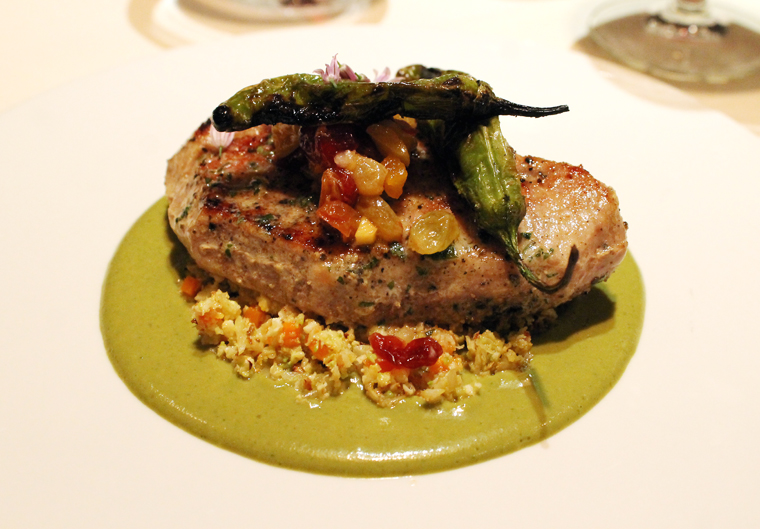 A big slab of pork in green curry. 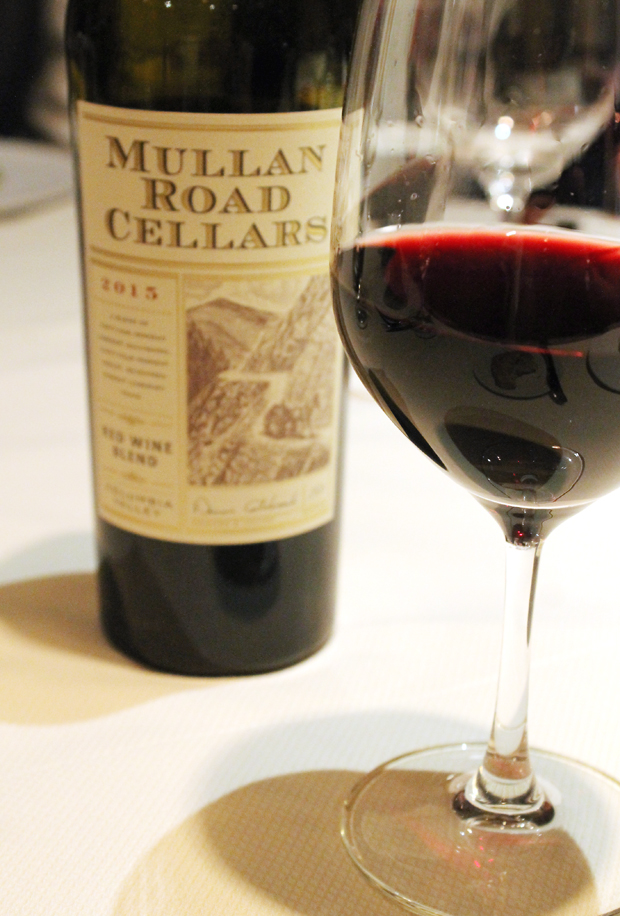 A taste of Mullan Road winery.

A large slab of pork tenderloin, which had been cooked sous vide, arrived on a smooth pool of green curry and accented with fruit chutney and blistered shishito peppers. Mullan Road, a winery founded by Dennis Cakebread, son of Jack and Delores who founded Cakebread Cellars, provided the accompanying wine, a Bordeaux Blend Columbia Valley 2014. I thought it was a surprising choice. But the blend of Cabernet Sauvignon, Merlot, Cab Franc and Malbec, somehow managed to not overwhelm the pork. Its blackberry note picked up the cherry, raisin and peach in the chutney, and its notes of baking spices married with the coriander, mild chilies and lime leaves in the curry. 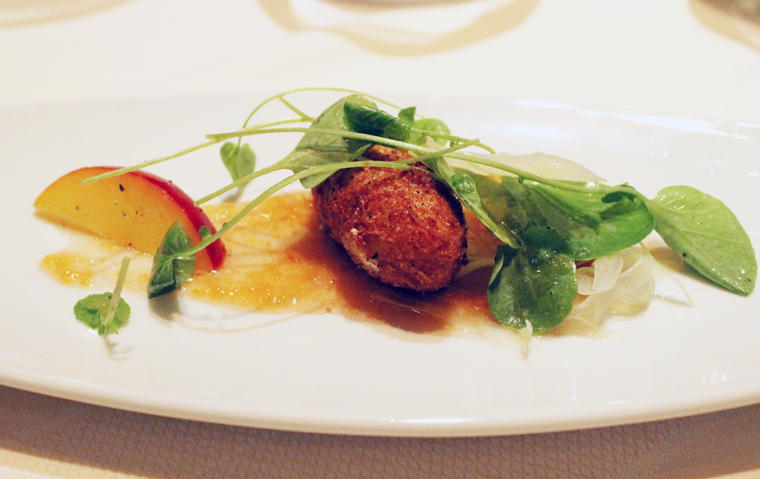 Sanchez served his favorite Bellwether Farms Carmody cheese in the form of a mini quenelle-shaped beignet. The buttery, milky cheese played off a salad of fennel, watercress and first-of-the-season peaches from a neighbor’s tree. 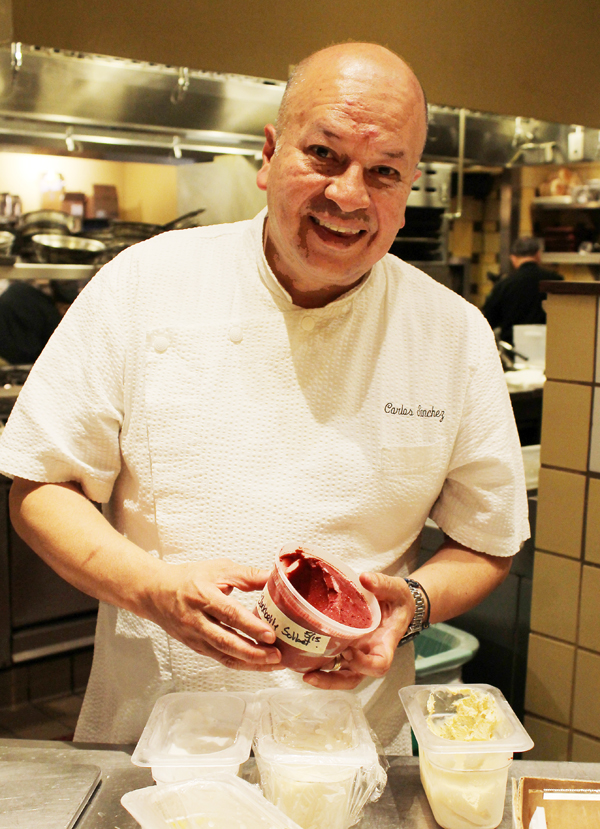 Pastry Chef Carlos Sanchez, who has been with Parcel 104 since the start.

Then it was on to his piece de resistance, a tiny Meyer lemon citrus tart served with the smoothest sorbet of Watsonville raspberries. It was just enough to satisfy yet leave you longing to return for more.