Feast your eyes on an entire beef short rib — Korean-style — at Belcampo in Oakland.

Belcampo’s flagship restaurant in Oakland’s Jack London Square may have only opened last month, but the soaring, 7,000-square-foot spot is already packing in the crowds, hankering for its menu focused on the company’s own sustainable meats.

Other restaurants may source sustainable products. But Belcampo takes that much further. It owns its own 25,000-acre ranch at the foot of Mt. Shasta, where it raises all its own organic, grass-fed beef, lamb, pigs, chickens, turkeys and other animals. It also owns its own USDA-certified slaughterhouse, as well as its own restaurants and butcher shops. That means there is never any middle man involved nor breaks in the supply chain. It’s as farm to table as you can get.

The Jack London Square locale is an ideal one with lovely waterfront views, and mere steps from Belcampo’s corporate offices.

On a recent Sunday evening, I dined as a guest of the restaurant. 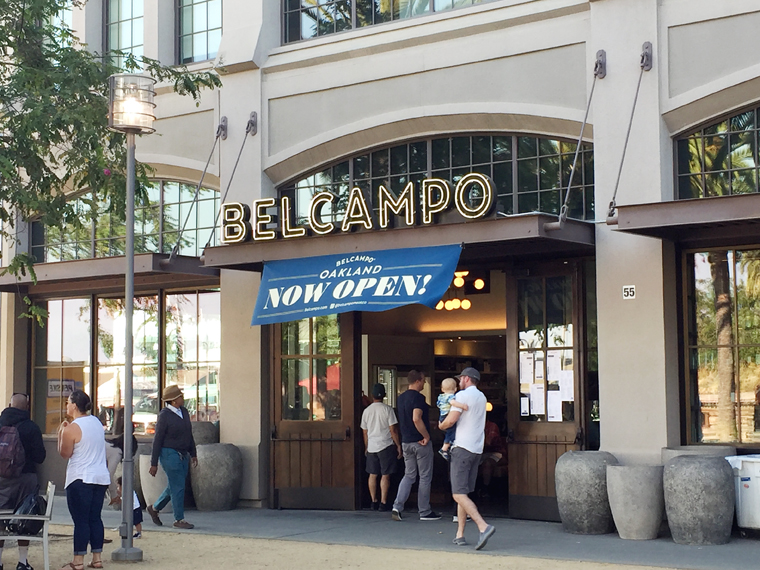 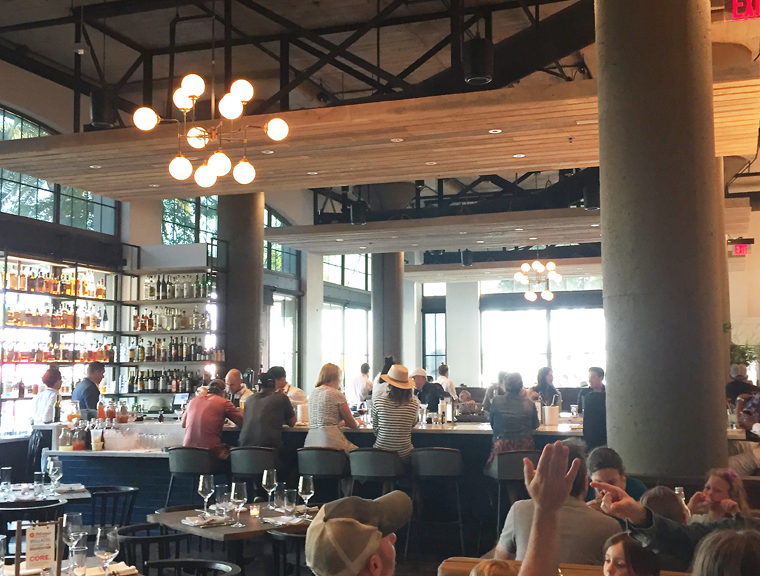 It’s a lively venue with a large bar with plentiful seats and a lounge area. The main dining room is framed by huge windows that let in a lot of light on a summer day.

Off to the side of the restaurant is a grab-and-go area, where you can pick up cartons of eggs, packages of sausages or containers of stock to take home. There’s also a bone broth station, where you can purchase cups of warm beef or poultry stock to enjoy, with your choice of garnishes. 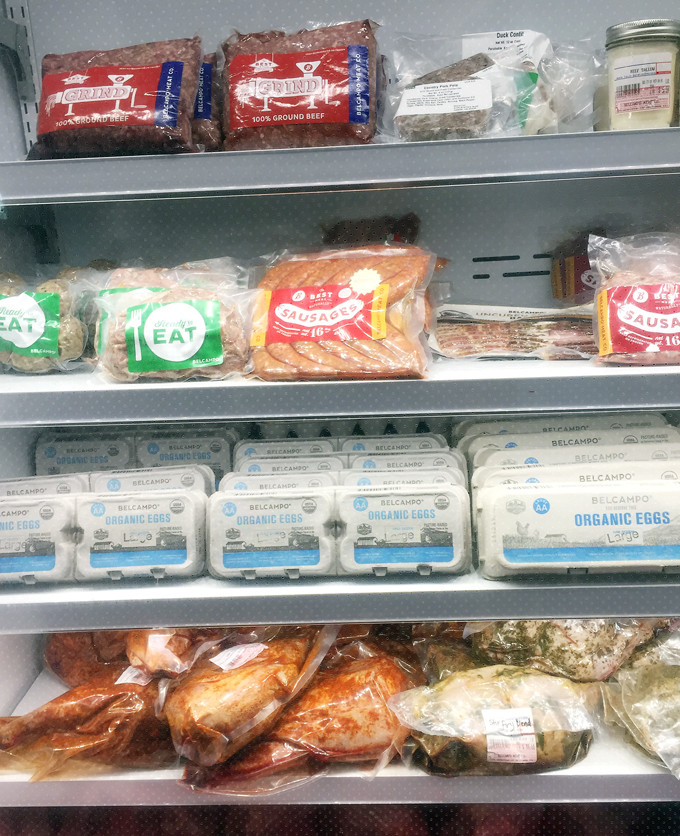 Packaged items for purchase to cook at home. 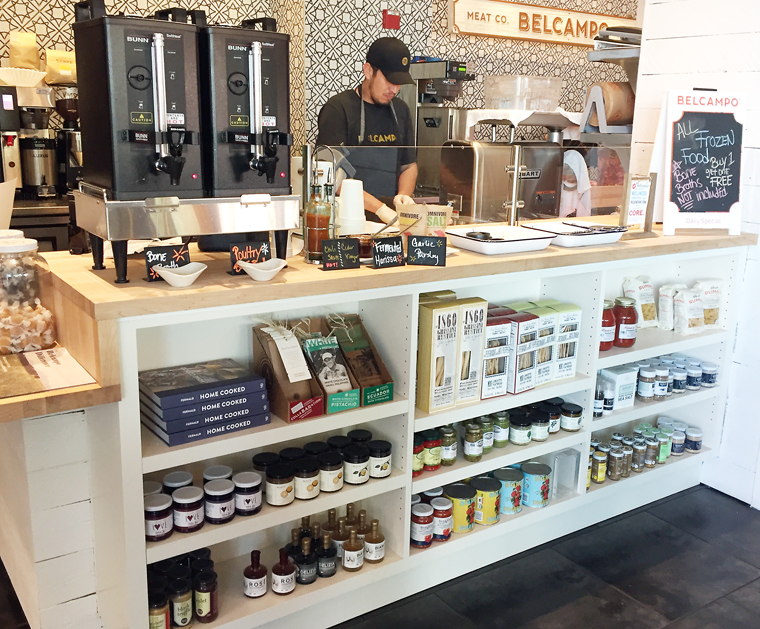 Right next to it is the butcher’s case with everything from lardo to oxtails to whole chickens to skirt steak to buy to cook at home. I particularly love how each beef or pork cut has a little sign affixed to it, showing where on the animal it comes from. Everyone passing by couldn’t help but stop to gawk at the impressive selection on display. Chef Brett Halfpap hails from the Belcampo in Santa Monica. You’ll find standard Belcampo favorites here such as the signature Belcampo Burger ($16) and Tallow Fries ($13/$18) with the potatoes fried in beef fat. But you’ll also find a much more globally influenced array of items.

You’ll also find a full bar here with cocktails by Josh Goldman of the Los Angeles-based Soigne Group, who has worked with stellar chefs such as Walter Manzke and Michael Voltaggio. The Preamble ($14) is a light, bright way to start the evening, especially if you don’t want something too boozy. It’s a refreshing blend of gin, blackberries, Orgeat, lemon juice, Angostura bitter, and a splash of sparkling water. 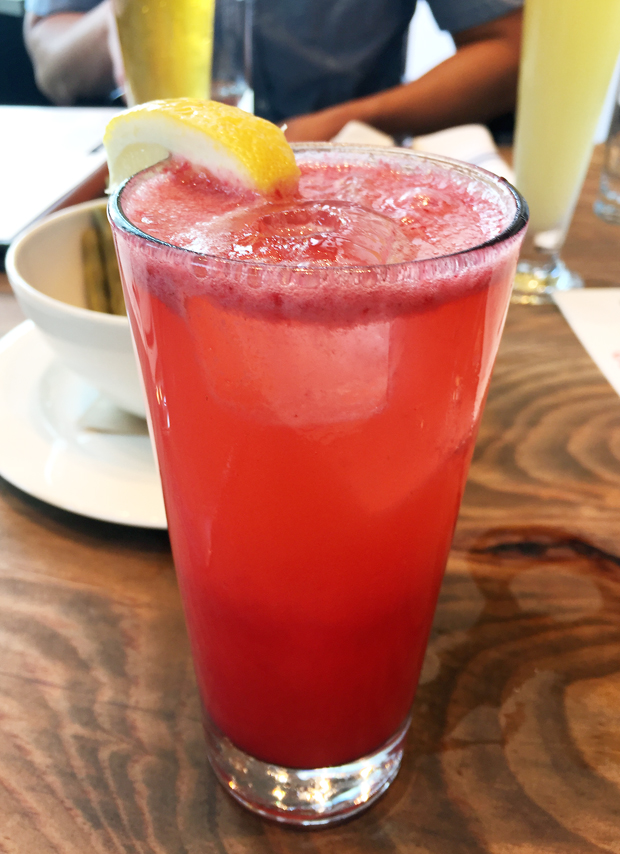 The Preamble to a good meal.

The House Pickles ($6) are a great accompaniment to any cocktail. The selection varies throughout the season, but can include green beans, beets and cucumbers, all crisp and perky with a pronounced tang. 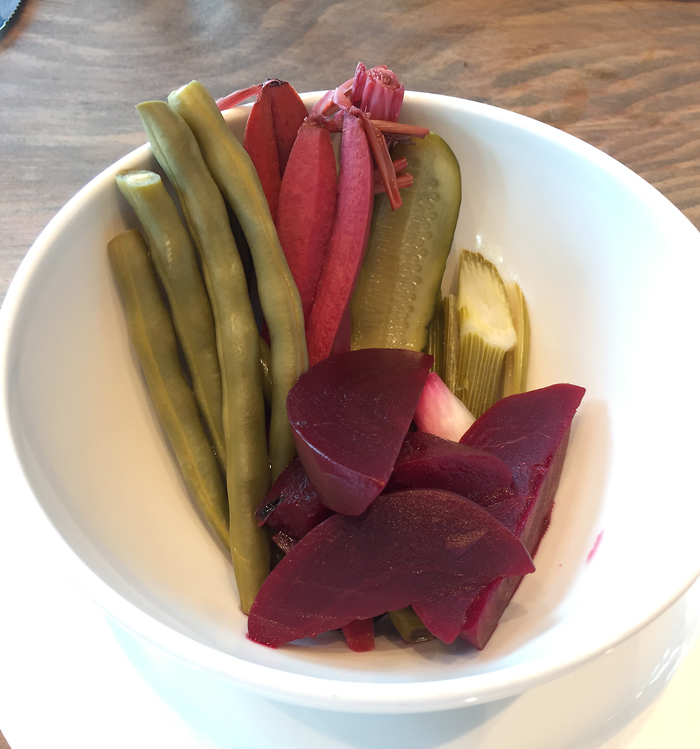 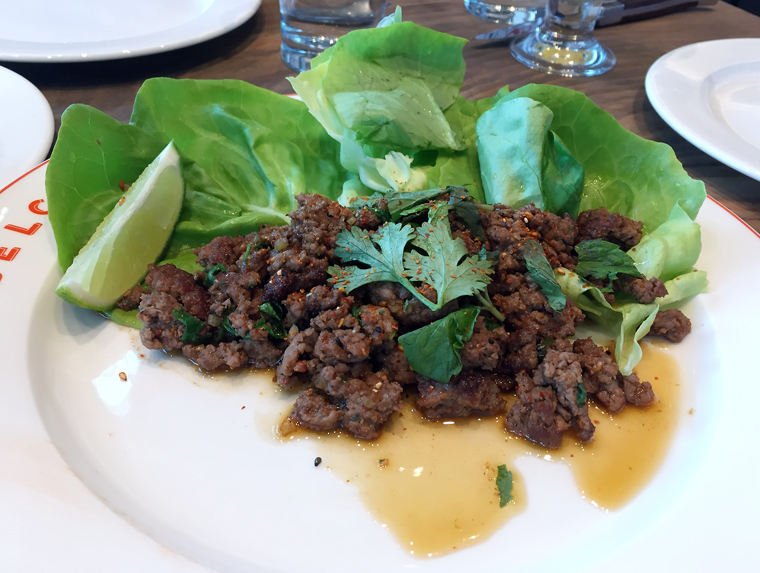 A big mouthful of flavor in lamb larb. Classic beef sirloin tartare that will rock your world.

The Lamb Larb ($16) will get the taste buds dancing. The minced lamb shoulder is seasoned with plenty of Thai chili and lime. Pile some onto a butter lettuce leaf, fold over, and take a bite for a fiery punch of Southeast Asian flavors.

The Classic Beef Tartare ($15) is a must-order. Even if you think you’re rather wishy-washy when it comes to beef tartare, this one will astound you. The pile of raw minced beef sirloin is accompanied by grilled bread and a custardy-thick farm egg yolk. What’s a revelation is how pure and clean this tartare tastes on the palate, compared to others that are too musky or too fatty or just too mundane. When I mentioned that to the general manager, she nodded in agreement, and offered up an even better description, calling it the “sushi of the other side.” Indeed, it is. And it will win you over. 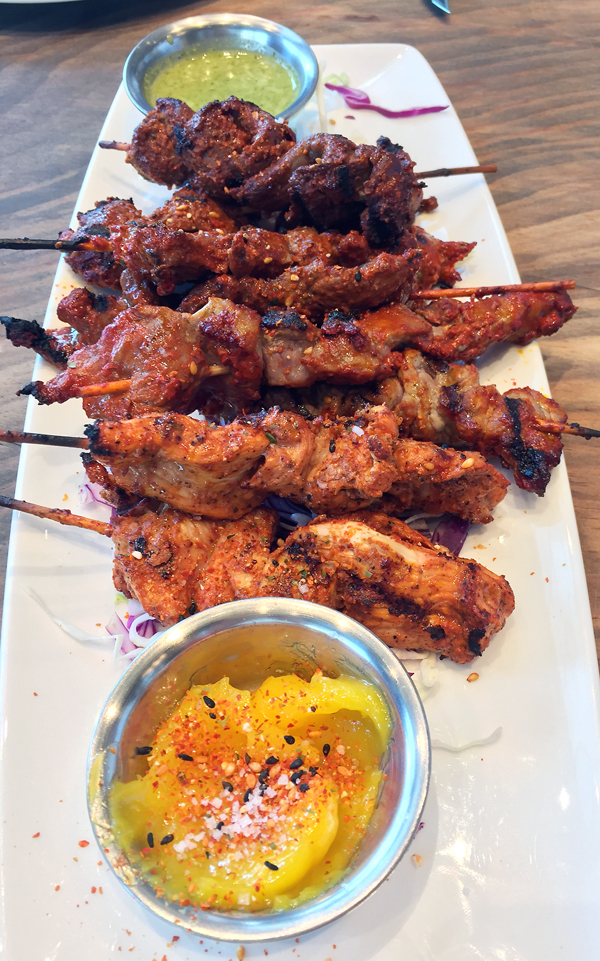 An assortment of grilled meat skewers.

The Skewers ($14) are a fun share plate of beef heart, leg of lamb, chicken thigh, and pork sirloin, all coated in a spicy, earthy Middle Eastern-inflected rub. Juicy and smoky, the selection is a great way to try a lot of Belcampo’s offerings all on one plate. An herbaceous shiso salsa comes on the side, but the meats are so good all on their own, you almost don’t even need it.

Yes, this is definitely a meat-centric place. Even the salads feature 7 ounces of protein on them. The Bacon Caesar ($15) forgoes the usual romaine for a mix of frilly frisee, crunchy endive and tender gem lettuce instead. Crisp, thick bits of pork belly bacon are strewn throughout. There’s even more umami from anchovies and Grana Padano. At the center is a slow-poached Belcampo farm egg. Pierce the yolk and it creates another layer of rich sauce to dress everything. A non-meat entree is the Cauliflower Steak ($18) that gets crisp on its edges before being showered with chewy, toothsome farro. A perky salsa verde ties it all together.

Duck Confit Poutine ($14) is irresistible. The impeccably crisp fries are tossed with chunks of duck leg confit and white cheddar, before getting lightly dressed with duck gravy. It’s actually a restrained poutine. There’s just enough gravy, cheese and duck confit to give the fries incredible flavor, but not so much as to weigh them down or get them soggy.

The show-stopper for us was the Korean BBQ Beef Rib ($38). I’ve cooked my share of short ribs and eaten them many times at restaurants. But I have never laid eyes on this Fred Flintstone version — an entire beef rib that’s brought to the table in one piece. It’s aged 28 days for deep flavor, then it’s marinated in soy sauce and mirin, and slow braised until the sticky meat is so tender that you could eat it with a spoon. It’s glazed with gochujang for another level of deep peppery flavor. Crisp little potatoes are hidden underneath, and a spicy kimchi red cabbage slaw garnishes the top. It’s nothing short of amazing. 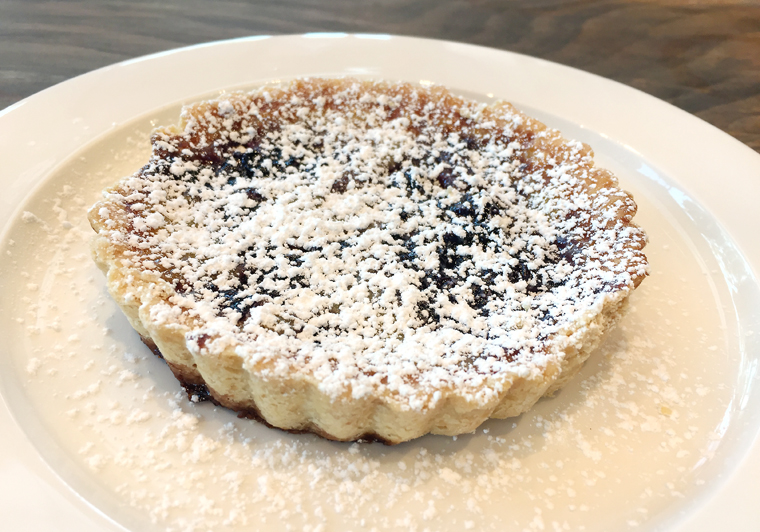 Even the desserts incorporate parts of the animal. The Tallow Tart ($10) is almost like a big thumbprint cookie in tart form. The flaky, fluffy, melt-in-your-mouth tart shell incorporates beef fat. But don’t worry — it does not taste at all of meat. It’s just got an added richness. Blueberry jam is spread over it, then dusted with powdered sugar.

If you don’t live nearby, you’d be wise to bring a cooler in your car when you visit Belcampo. That’s because even after getting your fill at the restaurant, it’s hard to resist leaving without buying something from the butcher’s case to take home.

We ended up purchasing some lardo, which we used a week later to drape over home-made pizzas, which were so porky lush, I am still dreaming about them. 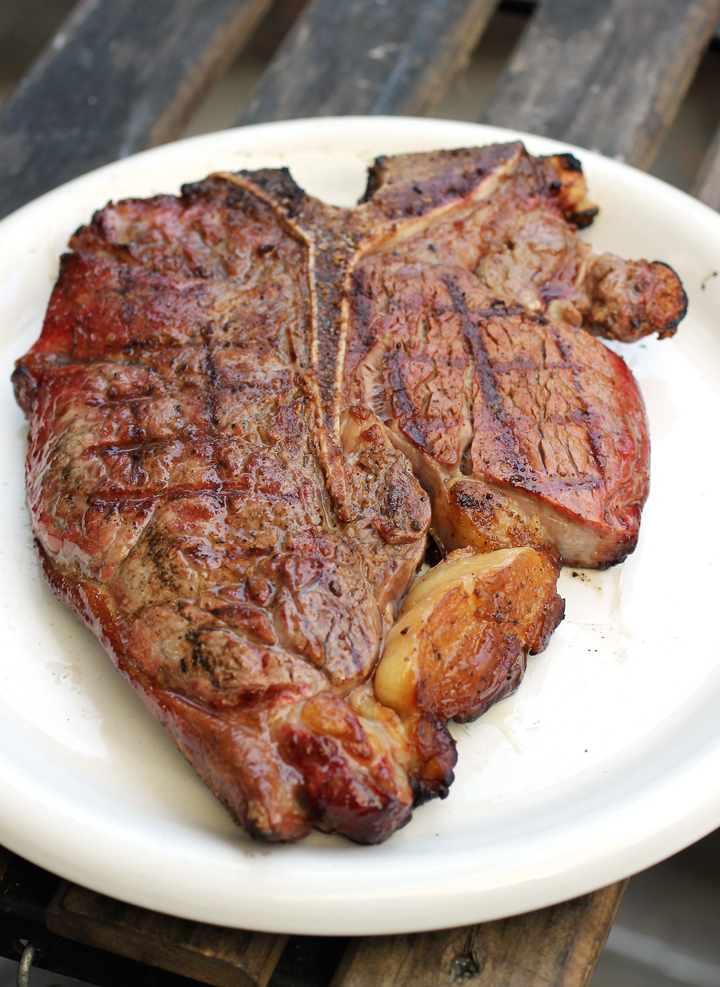 The Porterhouse we grilled the next night at home.

My husband, aka Meat Boy, couldn’t pass up a 1.6-pound Porterhouse, too, which he grilled. The steak again had that characteristic clean taste, along with an almost natural sweetness to it. Meat like this is definitely pricier than at your local supermarket. But when it’s been raised with such care to such exceptional quality, it’s worth the splurge — at least now and then. 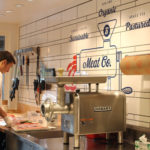 And: A Visit to Belcampo Larkspur