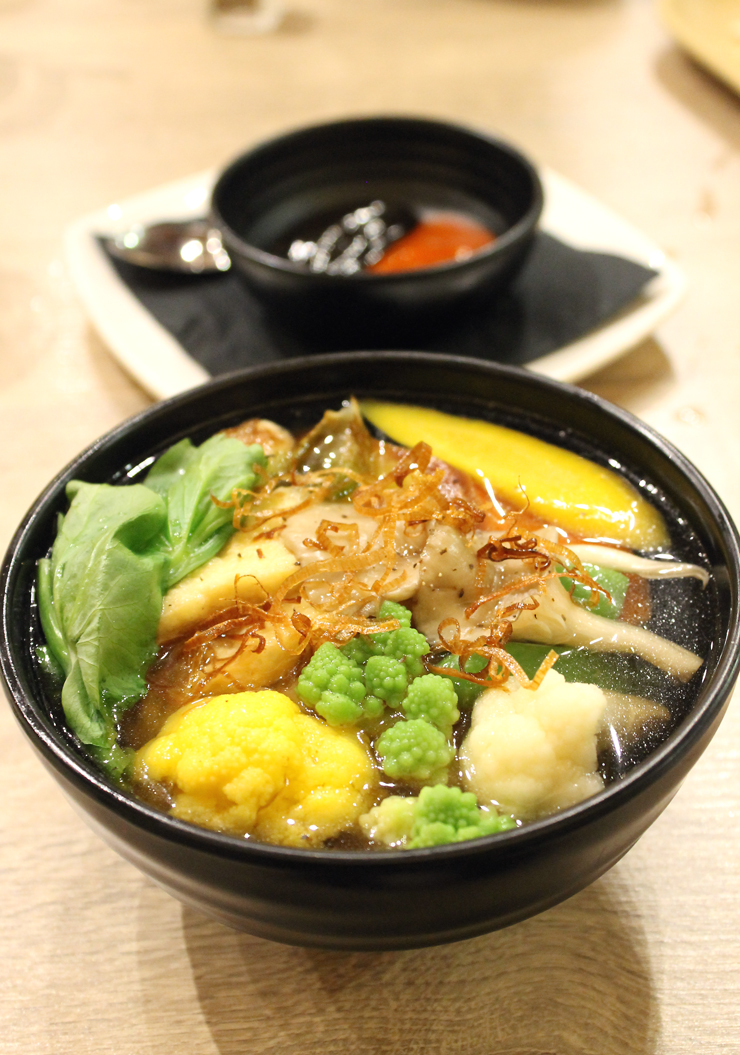 Even carnivores will be won over by this spectacular vegan pho at Qochon.

Hidden away in a business park in a commercial area of Fremont, Qochon is emblematic of this fierce new age of female empowerment that’s been long overdue.

Owners Quinn Tram and Lauren Pham took the gutsy step of opening this very personal, contemporary Vietnamese restaurant three years ago — despite neither having ever worked in a restaurant before.

Pham poured her life savings into the venture, and teamed with Tram, to follow a dream of serving Vietnamese food that had an emphasis on organics and healthfulness.

The two women met at J.P. Morgan, where they worked as commercial lenders for years. They bonded over their love of food, and soon began developing their idea for a restaurant whose name would be a playful take on the French word “cochon” for “pig.” “I always believe change makes you better. So, I took a leap of faith,” says Pham, the restaurant’s head chef, who grew up cooking with her mom.

Although the 45-seat restaurant is open only for weekday lunch — owing to its location that draws mostly diners from the nearby business parks — the two invited me in for dinner last week as their guest.

You feel at home the moment you step through the doors. There are flowers on every table. What’s more, there’s a large communal table in the center of the restaurant with neat stacks of magazines, as well as real books, an especially nice touch for lone diners. 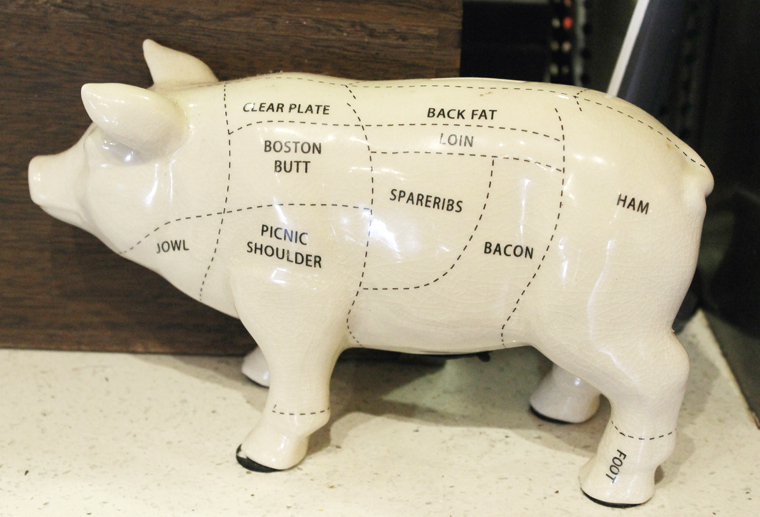 Some of the reading materials available while you dine.

“I didn’t like having TVs here,” says Tram. “So I eliminated the electronics, and I have books instead, travel and motivational ones, for people to enjoy instead. It also encourages diners to talk to those sitting next to them.”

Tram is responsible for the front of the house, as well as creating the hand-crafted fresh fruit drinks (the restaurant doesn’t have a liquor license), including the sensational organic Kumquat Lemonade, which arrives in a cute canning jar. Available only during kumquat season (she somehow got her hands on some this late in the summer), it’s a best-seller at the restaurant. It’s a breezy sip full of that citrusy, slightly bitter, slightly tangy rind flavor. 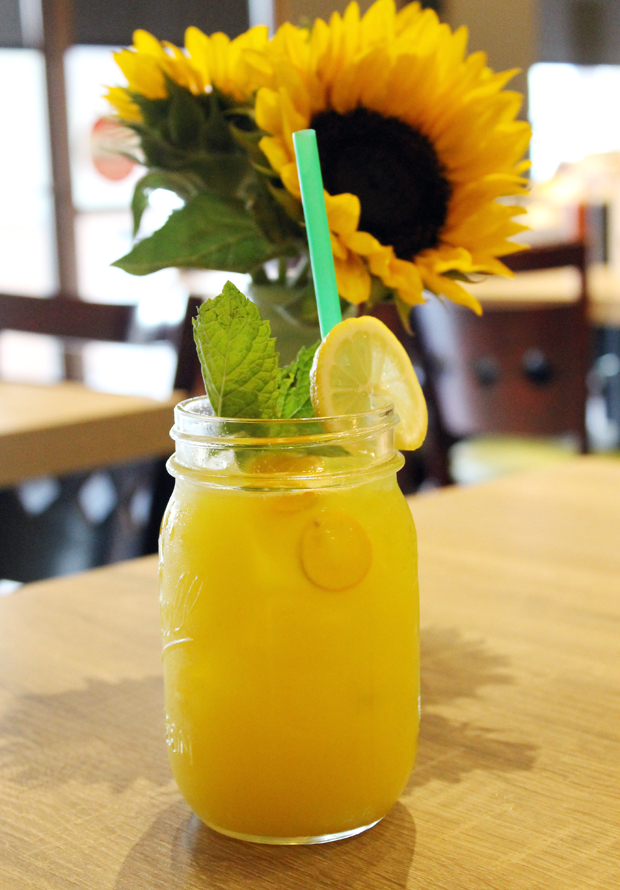 Next, it was on to a fabulous pork meatball that was especially light and airy because it was steamed instead of baked or pan-seared. Diced jicama added even more moisture, as well as little hits of subtle crunch. The two shop for ingredients at farmers market, so 90 percent of the produce used is organic. That includes the heirloom tomatoes in the sauce for the meatball, which tasted like they were just plucked from the vine. Fried julienned leeks on top added a burst of sweet oniony goodness. Owing to her Buddhist religion, Pham cooks with leeks rather than onions. 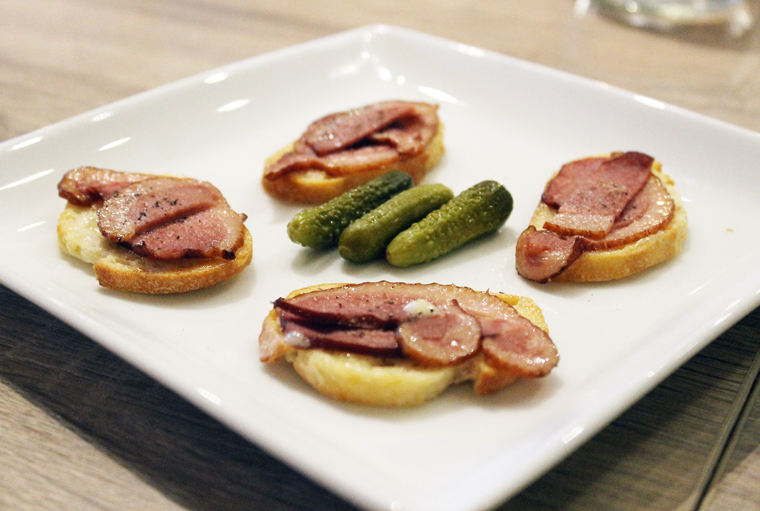 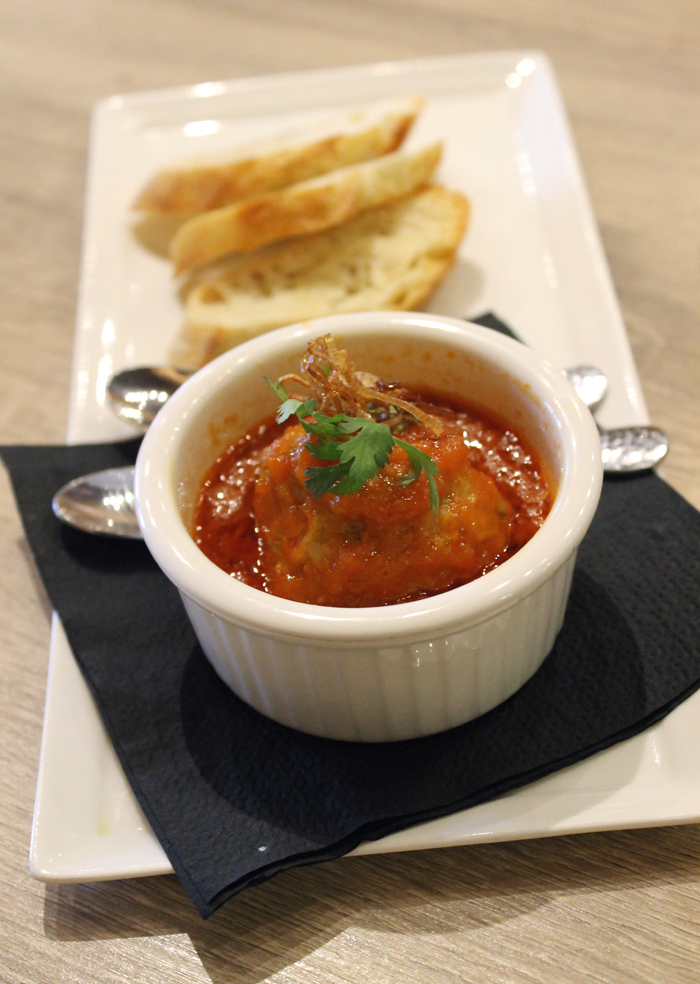 Shaking beef here is reinterpreted as meat and potatoes with filet mignon marinaded in cognac and stir-fried in a hot wok with thinly sliced fried potatoes that are almost like potato chips. A pile of watercress cut with spring mix and accented with pickled onions provides a nice foil to the richness of the beef.

Pham lightens up the traditional clay pot fish that’s normally heavy on fish sauce. Here, sea bass is cooked with soy sauce, wine and olive oil instead, which allows you to still very much taste the delicate flaky fish that’s garnished with shiitakes and wood ear mushrooms. On the side is brown rice flavored with brown butter and a touch of cilantro that’s nutty, chewy and delicious. 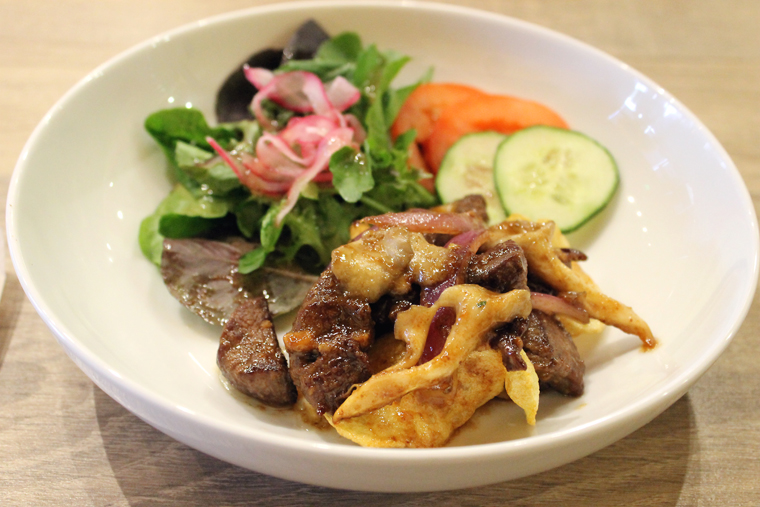 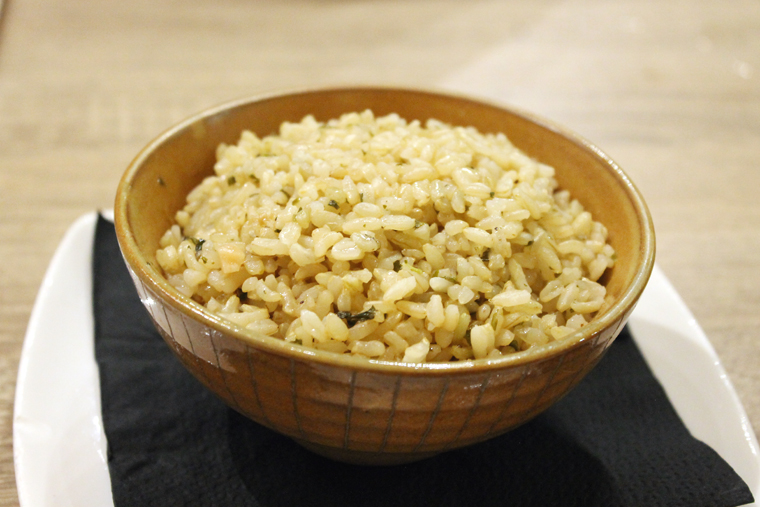 The last savory course is the one that still haunts me. It’s the signature Qochon Noodle Soup. It’s like pho — but vegan and gluten-free. And it’s incredible. Banish those thoughts that a vegan broth simply pales in comparison to the hefty beefy flavor of a traditional bowl of pho. That is not the case here. This is a veggie broth with levels and levels of flavor. Pham uses about 20 different kinds of vegetables, simmering some of them like corn on the cob overnight to extract as much flavor as possible. The result is a light and bright soup deeply, complexly flavored from the garden. It’s become such a signature that it often sells out early when it’s on the menu.

Fresh rice noodles from a local vendor are in the bottom of the bowl, which is also arranged just so with roasted Brussels sprouts that add a smoky touch, along with romenesco, snap peas, and rainbow carrots.

At first, the restaurant served the vegan pho unaccompanied, following the style of the northern part of Vietnam, where Pham and Tram were both born. But customers were so used to the Southern style that includes a garnishing plate of raw bean sprouts and fresh herbs, as well as condiment sauces, that Qochon started providing it, too. Truth be told, though, this vegan broth is so perfect already, you really don’t need any of that. Though the restaurant doesn’t typically offer dessert at lunch time, Pham served her custard flan that had a lovely creamy, wiggly texture not marred by any air holes. The caramel sauce had a satisfying near-burnt sugar taste that balanced the sweetness.

A pot of lotus green tea from Vietnam, flavored with fresh ginger, was poured at the table in one last delicious gesture of hospitality.

Qochon also offers dinners to-go, as well as catering, including for such notable companies as Tesla.

You can’t help but pull for Qochon — not only because of the two strong, independent women behind it — but because the food is flavored with such such care, passion and pride.