Yes, this is the way this chocolate and olive oil cake is supposed to look.

I think of this as the Frank Gehry of cakes.

It’s all angular pieces that jut this way and that. It seems to not make sense or be of this world. But the longer you gaze at it, the more you appreciate its quirky distinctiveness.

Just wait until you taste it, too.

“Chocolate & Olive Oil Cake” is a recipe by the incomparable Diana Henry, the London-based columnist, broadcaster and author who has a true gift when it comes to food writing, making you see, smell and taste an ingredient or dish in its totality just from the words she pens on a page.

The recipe is from her newest cookbook, “How To Eat A Peach” (Hatchette), of which I received a review copy. 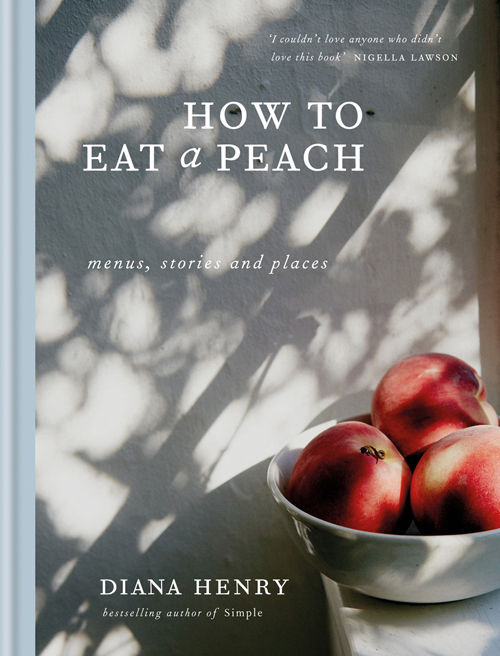 It’s a compilation of her favorite dishes in her menu notebook that she’s jotted down entries in since she was 16. These are the dishes she most wants to cook for friends, family and herself. They include such scrumptious fare as “Sea Bass Crudo with Radishes & Nasturtiums,” “Autumn Vegetables with Hazlenut, Roast Bell Pepper & Anchovy Relish” and “Arroz Nego with Romesco Sauce.”

She has a way of making it all come alive. Just consider what she writes about loving trips to New York: “In late spring and summer the city smells of hot sidewalks (even better when they’re hot and wet, then you can get a whiff of blossom in some neighborhoods) and food: garlicky pizza, hot sugar-dusted doughnuts, salty pretzels. Each day has a schedule: I visit cheese shops, bakeries, and tea houses, places that specialize in Indian breakfasts and Cantonese desserts. I eat oysters and steak and knock back Manhattans. I watch how much pleasure others take in food, like the Japanese man in a waterproof jacket, standing at a counter by himself eating crab in one of the city’s food markets, his face creased with concentration. Odd places, such as the Italian where I can get eggs and anchovies on toast for breakfast and the best chocolate and hazelnut cake I’ve ever tasted, have become regular haunts.”

I’ve made many chocolate cakes before. I’ve made quite a few olive oil cakes, too. But never have I made anything quite like this chocolate and olive oil cake. It’s a magical alchemy of dark chocolate, extra virgin olive oil, sugar, plenty of eggs, and just a couple tablespoons of ground almonds or hazelnuts. Nope, there is no flour in this. It is gluten-free.

The egg whites are beaten separately until they are stiff. That’s what gives this cake its lift. If you peek at it in the oven as it bakes, you will see it puff up quite a bit before settling down. The cake right after baking.

After baking, the top will be papery-crackly, kind of like that on a brownie. When you unmold it, the top layer will crackle more, resulting in even more shards. When you cut it into slices, the top will shatter still more. I’ll admit mine seemed much more crackly than the one pictured in the book. But so be it.

After all, that’s what makes this cake so interesting and unforgettable. It tastes very much like a brownie — quite fudgy, lush and moist in the center, thanks to the olive oil.

The recipe to garnish with confectioners’ sugar before serving. I’ve seen other similar recipes that call for plopping a big mound of whipped cream in the center before serving, too.

I did neither, preferring to revel in the magnificence of its perfect imperfect look instead. 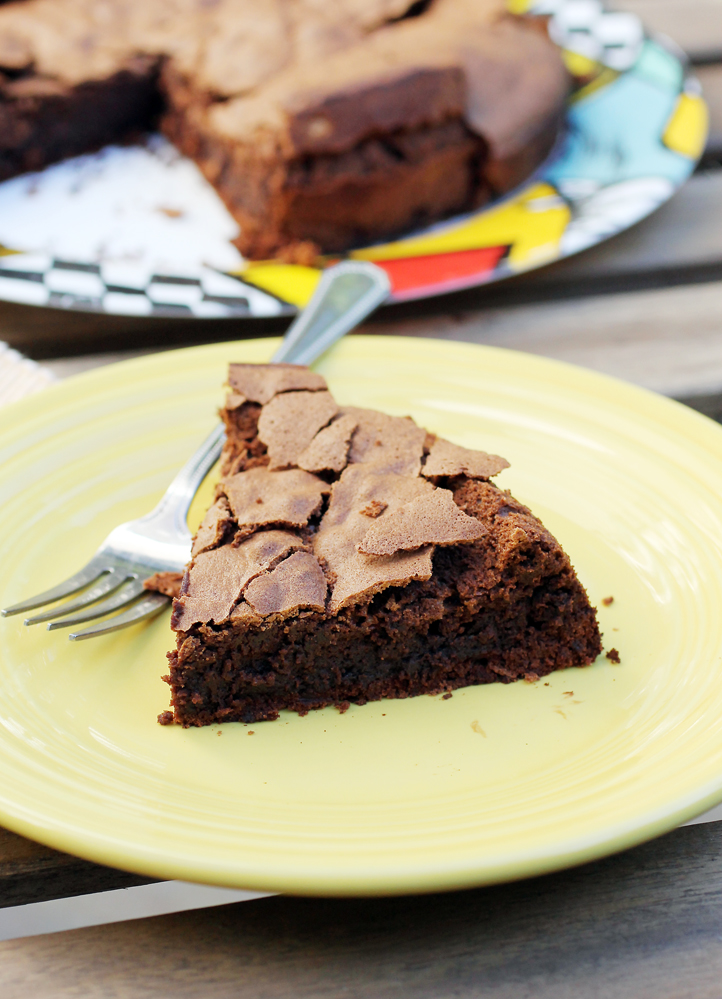 Like a giant brownie — but with the added richness of olive oil.

Unsalted butter, for the pan

Preheat the oven to 350 degrees, then butter an 8-inch springform cake pan and line the bottom with nonstick parchment paper. butter seems to be gentler n the edges of cakes, where as oil can “fry” them.

Break the chocolate into pieces and place in a heatproof bowl set over a pan of simmering water (make sure the bowl does not touch the water). Stir a little to help the chocolate melt.

Once it’s completely melted, whisk in the oil in a steady stream, then two-thirds of the superfine sugar, whisking to help the sugar dissolve in the heat of the chocolate. Remove from the heat and allow to cool a little. Stir in the ground almonds or hazelnuts, the salt, and egg yolks.

Using a really large metal spoon, loosen the chocolate mixture by folding in 1 big tablespoon of the egg whites, then fold in the rest carefully so that you don’t lose too much air. Scrape the batter into the prepared pan and bake for 40 minutes. Test by inserting a fine skewer into the center of the cake. If it comes out clean, with no batter attached, the cake is ready.

Let cool in the pan; it will deflate and crack a lot, but that’s fine. Carefully remove the cake from the pan and peel off the nonstick parchment paper. Put the cake onto a plate and dust with confectioners’ sugar before serving, if you like. This is a chic, grown-up cake, so it needs nothing more than creme fraiche on the side.

From “How To Eat A Peach” by Diana Henry 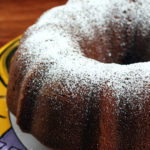 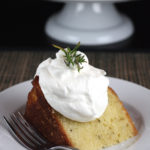