Dinner on the Farm — In Sunnyvale With new condos and tech buildings going up at a dizzying pace in Silicon Valley, it’s hard to believe that in the midst all this concrete and glass, one can actually still enjoy the bucolic experience of a dinner on a farm here.

But you can — right here in Sunnyvale at 1055 Dunford Way. At an 11-acre organic oasis owned by the Santa Clara Unified School District.

After taking over the property last year from Full Circle Farm, the district hired farmer Dave Tuttle to over see it. And how fruitful the SCUSD Farm has become. This season, 1,500 pounds of tomatoes were harvested and turned into sauce for use in lunches at the district’s 28 schools. In fact, every day, there is something featured from the farm on school menus, most notably in the salad bars. Persimmons ripening on the tree.

Twenty tons of pumpkins were grown, along with 3,000 pounds of watermelon. There are persimmon, avocado, pomegranate and lemon trees thriving. Rows of fava beans, Persian cucumbers, and kabocha squash were planted. There are nine laying hens, and beehives, too.

Volunteers from Google, Nvidia, Cisco, LinkedIn and other tech companies come out to plant, weed and set up hay bales. The setting for October’s farm dinner.

The district also has started hosting open-air, multi-course dinners ($75 per person) on the farm. I was invited as a guest to the second one this month, where 56 guests were seated at one long table on the edge of the fields. Solar-powered strings of lights were strung up on the trees to provide an even more festive look. Orchestra students from one of the district’s schools played classical music before the dinner to make the experience even more magical. Honey and honeycomb from the bee hives on site. All the proceeds from the dinners and farm stand go toward funding school field trips to the farm, where students learn not only the science, but the nutrition in what’s growing.

“The whole idea is to get students out here to realize where their food comes from,” says Steven Neese, partnerships manager for the district. “It allows them to see the world in a way they may not have seen before.” 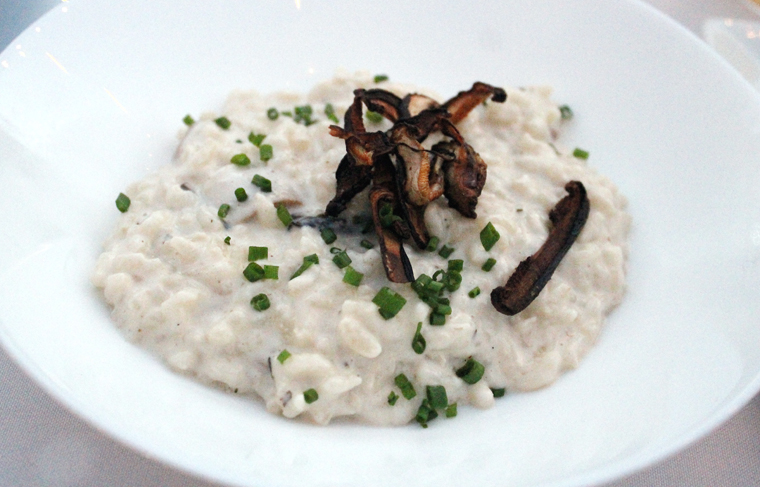 A district chef oversaw the dinner, preparing a scrumptious repast out of a mobile truck.

Dinner under the stars included a creamy, sweet, slightly spicy Sugar Pie pumpkin and apple bisque made with pumpkins and apples grown just yards away; wild mushroom risotto with thyme and sage from the farm; a salad laden with feta and home-grown persimmons and pomegranate; Petrale sole finished with orange buerre blanc with zucchini and potatoes from the farm; and rich chocolate mousse crowned with a macaron filled with farm-grown persimmons. To stay up to date on upcoming dinners and other events at the farm, email: farm@scusd.net