A Visit to Sam Choy’s Poke to the Max A huge musubi with Spam and green onion omelet at Sam Choy’s Poke to the Max.

At first, you might scratch your head at the fact that Hawaiian celeb Chef Sam Choy picked a sleepy block in San Bruno, right across the street from Artichoke Joe’s Casino, for the first California franchise of his Sam Choy’s Poke to the Max.

But the reason for the unlikely location becomes crystal clear when its head Chef Wade Tamura explains: First, the seafood gets flown in regularly from Hawaii, and San Francisco International Airport is just a short hop away. Second, one of Choy’s favorite vacation spots just happens to be San Francisco.

With poke places seemingly popping up on every block these days, what sets this one apart? I had a chance to find out, when I was invited in as a guest of the fast-casual eatery a week ago. First, there’s no denying the pedigree of having a James Beard Award-winning Hawaiian chef behind it. Choy comes out to the Bay Area at least four times a year. And Tamura, who was previously at Facebook, Google, and the Slanted Door in San Francisco, also has worked with Choy for more than two decades.

Second, the fish is definitely fresh. Tamura uses only sustainable seafood. He even brings in ogo or limu, the lacy-like seaweed from Hawaii, to add to the usual wakame in his seaweed salad, giving it a more complex taste and texture as a result.

Sam Choy’s Poke to the Max boasts two brick-and-mortar locations and four food trucks in the Seattle area. Tamura is looking to start up the San Bruno food truck once he can get the eatery fully staffed — never an easy proposition in the Bay Area these days. In the next two years, if all goes according to plan, he hopes to have a total of four storefronts and eight food trucks in California. He’s eyeing Santa Cruz for the next eatery. 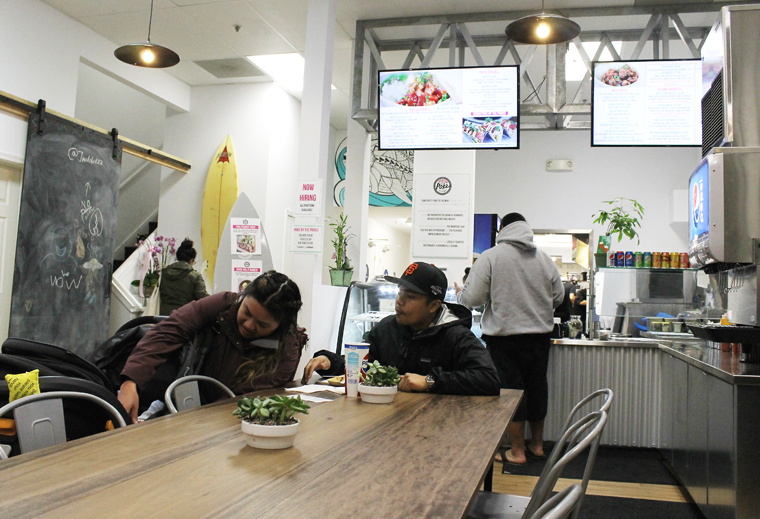 Inside the casual eatery. An explainer on the wall.

The core menu is the same at both the Seattle and San Bruno locales. But Tamura creates specials regularly, which are listed on a surfboard-shaped stand. The Hawaiian theme carries throughout the brightly lighted space, with a couple of beautiful murals by local artist Derrick Higa.

For instance, that night there was a special of Thai peanut poke — a mix of albacore cubes with onions, cucumbers, house-made peanut sauce and crunchy chopped peanuts. It’s like Asian peanut noodles — minus the noodles.

The musubis ($9.99 to $12.99) are huge. They’re more like big maki rolls that are cut into slices, rather than the traditional compact one you pick up at ABC stores in Honolulu and eat out of hand. Here, you definitely need to use chopsticks, because the musubis come smothered with aioli and unagi sauce. The “Reconstructed” ($9.99) plays on the classic with two layers of rice sandwiching Spam and green onion omelet. It’s plenty filling, with that salty, comforting taste of Spam that you hate to admit you love. Call me a purist, but I think I would have preferred less sauce or even no sauce, because I thought there was just too much of it. A trio of poke tacos.

The tacos ($13.99) come three to an order, arranged in a special stand to keep them upright. Each is made with both a soft and a hard shell tortilla so you get the best of both worlds. Ours had a different filling in each one: Sriracha Sweetie made with everyone’s favorite hot sauce, Spicy Salmon with tobiko, and Classic Shoyu Ahi with a touch of sesame oil.

You’ll need plenty of napkins to eat these stuffed-to-overflow tacos, because once you take the first bite, the filling will start to spill out. Yup, they’re messy, but quite tasty. A tasting of various pokes.

Tamura also brought over little sample plates of the various pokes, including a fruity-spicy chili mango salmon; “Da Cali,” a mix of tuna, surimi (faux crab), avocado and aioli; and a delicious tako (octopus) mixed with onions, cucumbers and a moderately spicy kimchi.

The seaweed salad can be ordered as a side ($4.99), and I highly recommend it not only because it’s delicious, but because its bright rice vinegar-sesame oil dressing can act as a nice palate cleanser in between bites of poke.

One of the most popular dishes isn’t even built around fish. As Tamura explains, “We have poke in our name. But really, we’re a plate lunch place.” 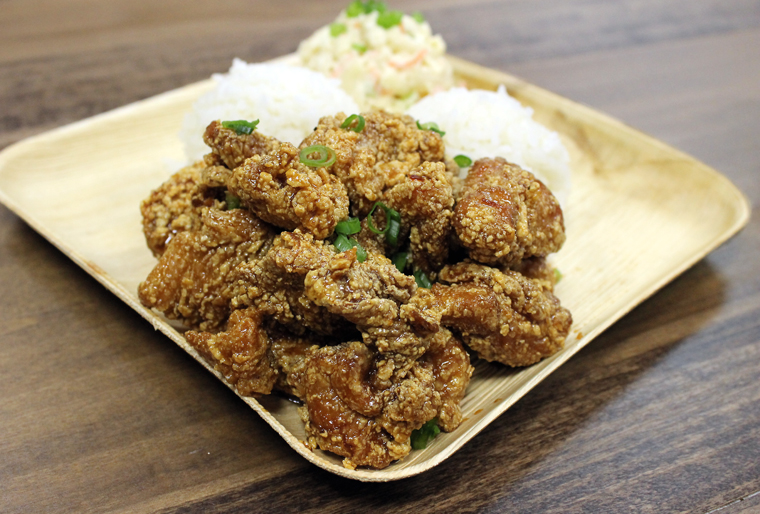 The fried chicken you won’t be able to get enough of.

As such, the Garlic Fried Chicken plate ($10.99) is a runaway hit. It’s easy to see why. Bite-size boneless pieces of chicken get dusted in cornstarch before frying, resulting in supreme crunchiness without any heavy batter to weigh it down. As crisp as can be, and with a good dose of garlic, it’s just what you want with two big scoops of rice and creamy macaroni salad.

Even on a rainy evening in San Bruno, it’s enough to transport you wistfully to a tropical beach — if for a moment.