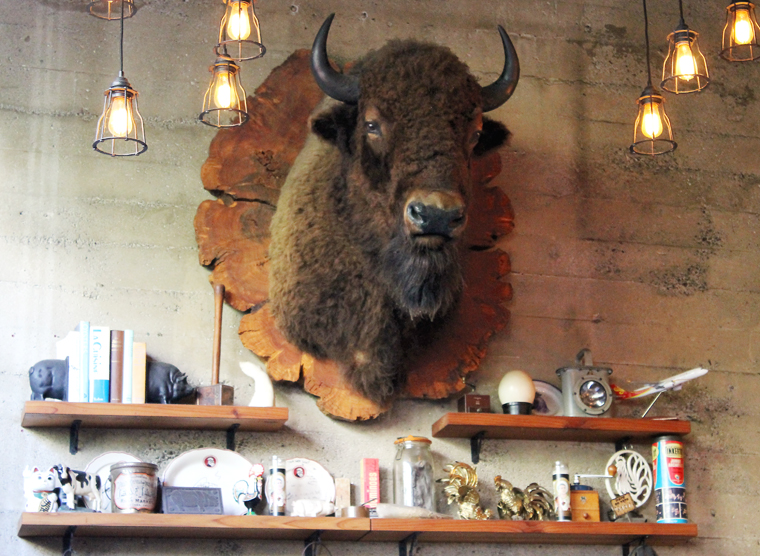 A cook prepares a huge platter of meat, meant to be shared (of course!).

At Cockscomb, the cocktail list is as exuberant as the rest of the menu, playing to the seasons in a whimsical way. Consider the amusingly named “Invasion of the Body Snatchers” ($14). It may honor a horror-flick, but it couldn’t have looked more pastoral. The “Invasion of the Body Snatchers.”

The color of peas because it is made with a sweet pea syrup, it gets a boost of botanical flavor from gin. With a foamy top of egg whites and a garnish of fresh pea sprouts, it’s like drinking a liquid spring garden. I wanted to be in a wicker chair on a veranda somewhere enjoying this.

Cosentino’s grilled cheese ($13) has become legendary. It has only a few ingredients, but together they create symphonic magic. Two slices of bread get griddled until the interior of creamy, slightly funky taleggio cheese gets all melty and gooey. A sunny-side up duck egg with a brilliant orange yolk gets stacked on top. The crowning touch? Honey, that spills out and puddles at the bottom of the plate. Our server instructed us in the best way to dive in: Flip the egg over so that the yolk is touching the bread, then cut into it so the yolk oozes and gets smeared all over the crisp bread for maximum effect. What makes this grilled cheese sing is that taleggio adds complex depth while the genius touch of honey adds an unexpected sticky sweetness. Who doesn’t love sweet-savory, right, especially when you put an egg on it?

Mushroom tempura ($14) brought maitakes fried up to a delicate crispness as addictive as potato chips. Eat one, and you won’t be able to stop, especially because of the coffee salt and seaweed powder sprinkled atop that adds more umami punch, to go with the rich dipping sauce of intensely earthy porcini bernaise. 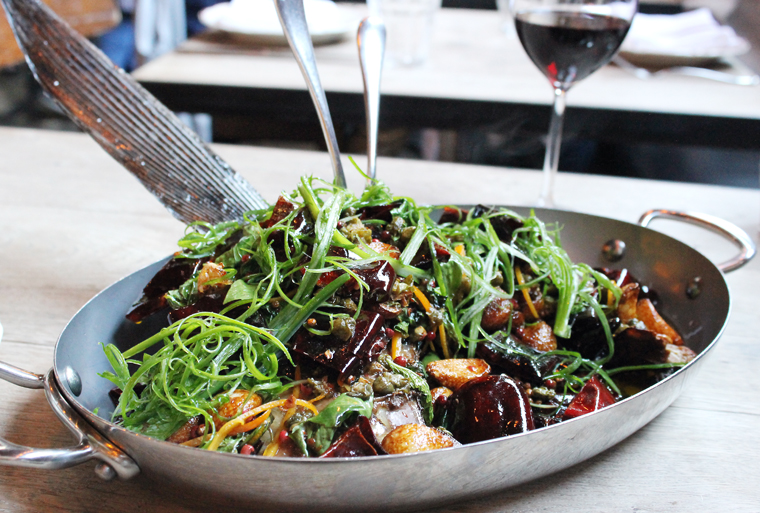 The eye-catching presentation of yellowtail collar.

Cosentino is one of the few chefs in the area who features fish collars regularly on his menus. That night, a yellowtail collar ($30) was grilled and served spectacularly in a big stainless braiser, with its long fin decoratively sticking upright. The fish was piled with dried red peppers, capers, green onion slivers, pink peppercorns, curls of orange peel, and garlic cloves. It was like Sichuan meets Italian — savory and spicy, fruity and smoky. Exercise patience to dig your way through all the crevices of the cartilage to extract every morsel of succulent flesh. It is so worth it.

For the mains, my husband chose the signature Bacon Chop ($35), a huge pork chop, served sliced on the plate with pea shoots, greens and radishes. Juicy as can be, with its edges of fat dreamily crisp, it did indeed taste like bacon with its smoky sweet porky taste. 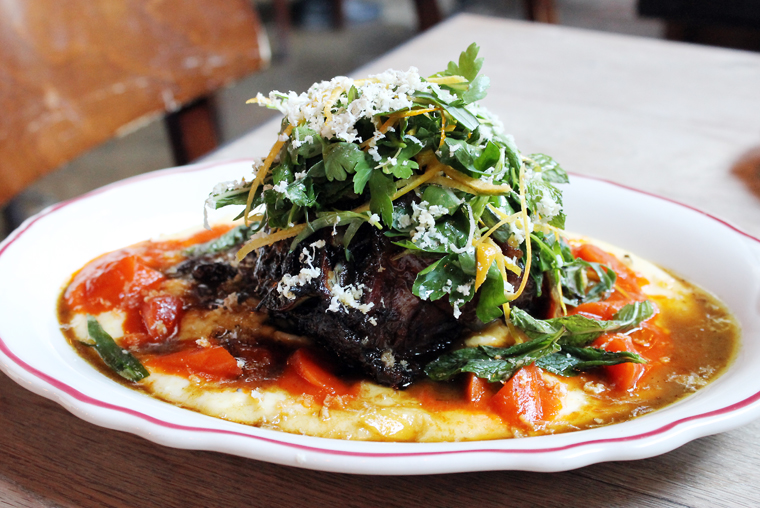 You also don’t see lamb neck ($29) too often on a menu, which is a shame because it’s such a fabulous cut. Think of it like a huge piece of oxtail on the plate, with tender hunks of rich meat just waiting to be pulled off with a fork. That’s what lamb neck is like after it’s been braised. It gets a lift from horseseradish gremolata. It’s all served over spoonable, cheesy polenta.

A side of roasted eggplant ($9) was smoky and incredibly custardy. Garlic, pickled onions and cilantro gave it an Asian bent.

For dessert, we went a little crazy. But I couldn’t resist. Who can when it comes to a showstopping entire pineapple ($25)? The fruit itself is removed in a spiral in one continuous ring, then cooked sous vide with star anise, habanero and other spices, before being oven-roasted to caramelize it. The shell is filled with passion fruit curd and toasted coconut ice cream before it’s topped with a cloud of torched meringue. The roasted pineapple is served to the side of the shell, with a big long spoon and sharp steak knife to attack everything. A table of six next to us also ordered one. Yes, six of them shared it, while it was just my husband and I digging into the gorge of bright, tangy curd, creamy coconut ice cream and fluff of meringue. The actual pineapple was sticky with charred edges and a concentrated tropical taste. The leftover pineapple actually went very well the next day atop Greek yogurt.

Of course, given all that came before, this dessert might have been overkill. But this is the place you come to revel in that, especially when it’s this adroit. 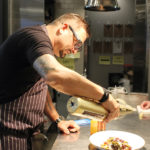 More: A Visit to Las Alcobas