All Rise For Cheesecake Souffle Presenting the souffle cheesecake with a Wine Country garnish.

Japanese pancakes and cheesecake are having a lofty moment.

Their poofy, airy stature, as if they’ve just been inflated with a pump of helium, can’t help but be attention grabbers.

I’ve fallen under their spell, too. So how could I resist trying my hand at the recipe for “Cheesecake Souffle with Roasted Grape & Vanilla Gastrique”?

The cookbook, which recently won a “Cookbook of the Year” award from the International Association of Culinary Professionals, was written by Justin Wranger, executive chef of Jackson Family Wines; and Tracey Shepos Cenami, chef de cuisine of the wine company; with Tucker Taylor, director of culinary gardens at Jackson Family Wines (whom if you follow on Facebook or Instagram know posts some of the most beautifully vivid photos of fruits, vegetables and herbs that you’ll ever see). Jackson Family Wines is one of the largest wine producers in the world, with a portfolio of 40 brands in California, Oregon and across the world.

The cookbook definitely celebrates the beauty of Sonoma Wine Country with gorgeous photos and a bevy of recipes that take you from everyday dining to laid-back entertaining. Not surprisingly, seasonal produce and herbs are prominently spotlighted.

The winery’s executive pastry chef, Robert “Buttercup” Nieto, fell for this Japanese-style cheesecake the first time he tried it on a trip to Tokyo. So, of course, he had to create his own — with a flavorful flourish of Wine Country as a finishing touch to it. 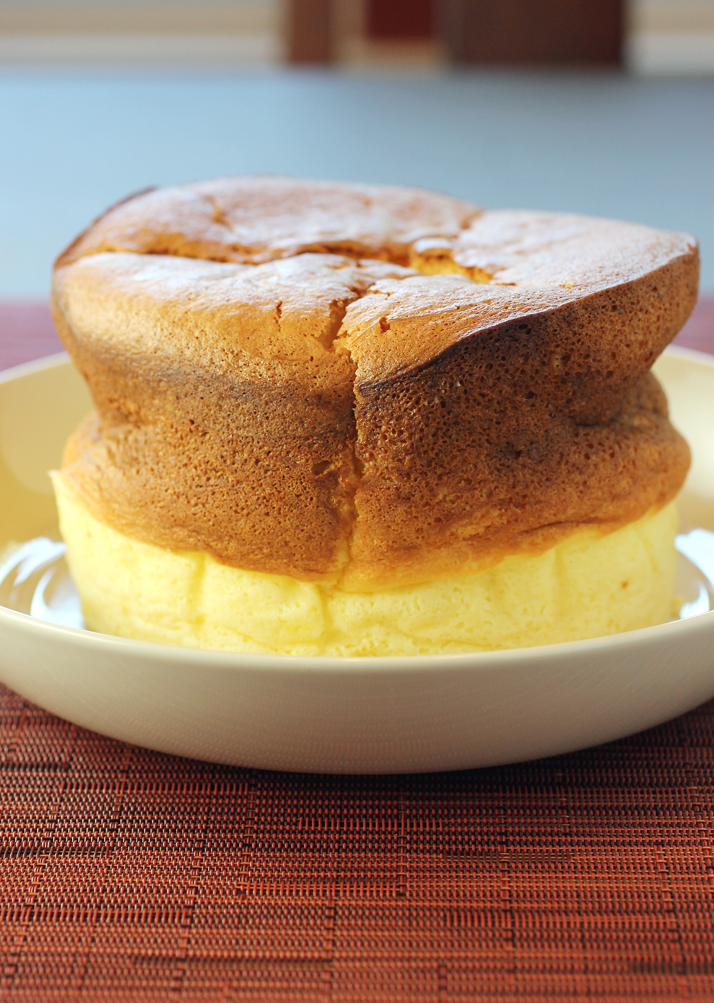 The cheesecake after being baked, cooled, and unmolded. Candied nuts that are unbelievably easy to make add crunch.

The cheesecake gets its height from egg whites whipped with sugar, which gets folded with melted cream cheese, a bit of butter, a splash of milk, fresh lemon juice and zest, and just 1/4 cup of cake flour.

The fluffy batter is gently poured into a cake pan with a parchment collar, just like you would prepare it if you were making a souffle. Then, it’s baked in a water bath until it rises majestically tall and turns golden brown on top. If you get a few cracks on top, as I did, no worries, since there is a topping that will be spooned over it.

That topping is a compote made with sugar and roasted grapes scented with vanilla bean. Just be aware that the mixture will bubble and sizzle when you add the hot water to the pan of heated sugar. A touch of apple cider vinegar really balances it out nicely so that it’s not cloyingly sweet by adding a subtle tang and a deeper level of fruitiness.

The final garnish is candied almonds that are unbelievably easy to make. It’s just almonds tossed with sugar, a pinch of salt and a few teaspoons of water, that are baked in the oven. The almonds end up crunchy with a sweet candy coating. This is such a simple method that you’ll be wanting to again and again to make more as a garnish for salads or breakfast porridge or other desserts.

Once the cheesecake is done, you leave it in the oven for 30 minutes to cool slowly. Then unmold it onto a rack to cool completely before serving. It’s solid yet still a bit fragile. I may have not been delicate enough when unmolding because mine did end up a little indented where the parchment ring had been. But hey, I like to think it made my cheesecake more ladylike with its own cinched-in waist.

Spoon some of the grapes and its syrup over the top, and sprinkle on the candied almonds.

The texture is soft and velvety, like an angel food cake crossed with chiffon cake. The taste is that of vanilla cheesecake, complete with the requisite zinginess from the cream cheese. This is definitely a much lighter tasting cheesecake. Whereas, a slim slice of  traditional cheesecake can be almost too much to take after a big meal, this cheesecake could easily be enjoyed no matter what came before it.

If that isn’t an open invitation to indulge in more cheesecake, I don’t know what is. 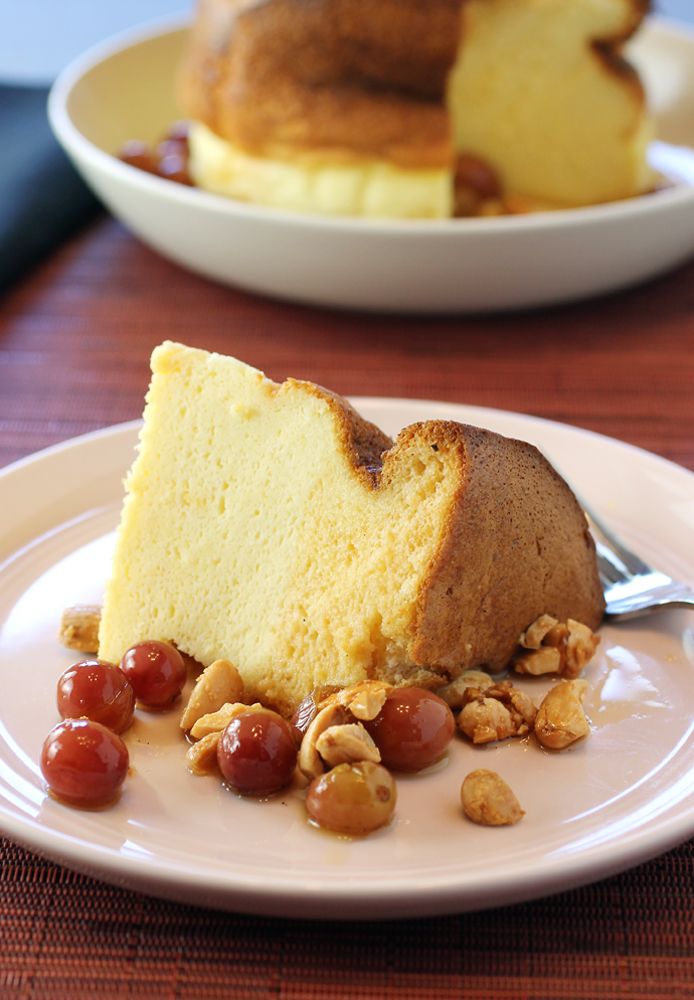 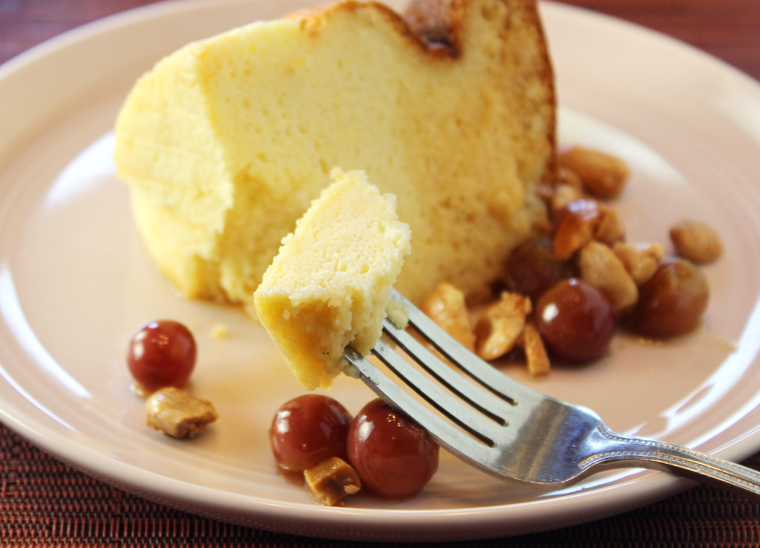 If you find traditional cheesecake too heavy and rich, this one will be a nice change of pace.

For the roasted grape and vanilla gastrique:

For the cheesecake souffle:

To make candied almonds: Preheat oven to 325 degrees and line a quarter sheet pan with parchment paper. In a small bowl, stir together the almonds, sugar, salt, and 2 teaspoons water. Spread the almonds on the prepared pan and bake for 10 minutes. Stir the almonds and continue to bake for 7 minutes longer, until golden brown. Pour onto a plate to cool, then transfer to an airtight container. The candied almonds can e made up to 1 week in advance and stored at room temperature. Makes 1 cup.

To make the roasted grape and vanilla gastrique: Preheat the oven to 300 degrees convection (325 degrees conventional). Line a quarter sheet pan with parchment paper. Spread the grapes on the prepared pan and roast for about 17 minutes, until slightly soft. Let cool completely.

Fill a medium bowl halfway full of water and ice. In a small, heavy pot, heat the sugar over medium heat until it has melted completely and turned amber. Slowly add the hot water while mixing constantly with a whisk until completely dissolved. Add the vanilla seeds and pod, vinegar, lemon juice, and roasted grapes and simmer over medium heat, without stirring, for 10 to 12 minutes, until mixture has reduced to a syrup consistency. Remove from the heat, pour into a small heatproof bowl, and nest the bowl in the ice bath to cool.

To make the cheesecake souffle: In a small bowl, sift together the cake flour, cornstarch, and salt. Set aside. Fill a medium pot one-third full with water, place over medium-low heat, and bring to a simmer. Put the cream cheese in a heatproof bowl and rest the bowl in the rim of the pan over the simmering water, making sure the water does not touch the bottom of the bowl. Heat until the cream cheese melts completely. Remove the bowl from over the pan and let the cream cheese cool slightly. Slowly whisk the egg yolks and milk into the cream cheese until well mixed. Add the melted butter and whisk until incorporated. Add the lemon zest and juice and the flour mixture and whisk until well mixed.

In a stand mixer fitted with the whip attachment, beat the egg whites on medium speed until frothy. With the mixer running, slowly add the sugar and cream of tartar and beat until medium peaks form.

Remove the pan from the oven and carefully lift the smaller pan out of the larger pan. To unmold the cake, using one hand, gently flip the cheesecake out of the pan onto your other outstretched hand. Carefully peel off the parchment paper, then place the cake upright on a wire rack and let cool completely.

To serve: Transfer the cheesecake to a serving platter. Top with the roasted grape vanilla gastrique and a sprinkle of the candied almonds. Serve, cut into wedges. 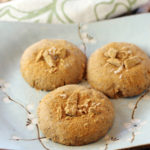 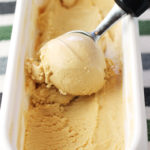