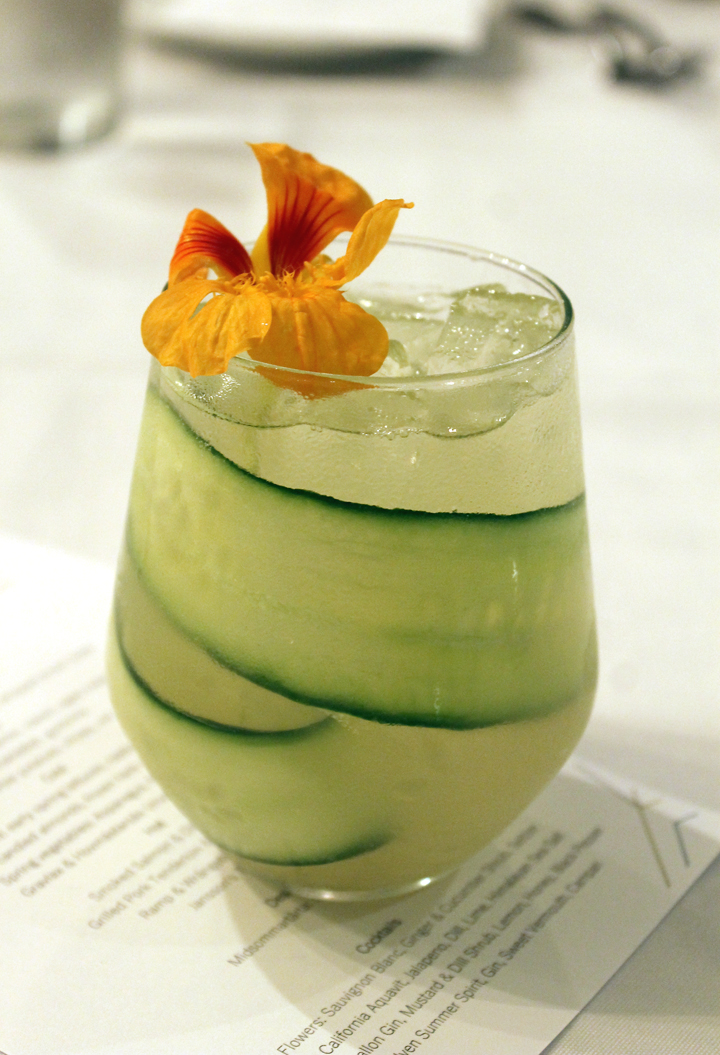 “Wine & Flowers” cocktail on the new midsummer menu at Plaj.

After a long, harsh winter of darkness with a mere four hours of light per day if you’re lucky, Scandinavian residents get rather giddy when summer approaches. Can you blame them?

Swedish-born Chef-Owner Roberth Sundell offers up a taste of that exuberance from his home country by presenting a special midsummer menu at his Plaj restaurant in San Francisco.

Located inside the boutique Inn at the Opera hotel, Sundell opened the restaurant in 2012 with his wife Andrea to showcase modern Scandinavian cuisine with California influences. They followed that up in 2017 with the fast-casual Stockhome in Petaluma.

Plaj is a phonetic spelling of the word “play.” And that’s just what the couple wants you to do when you visit this intimate dining room. 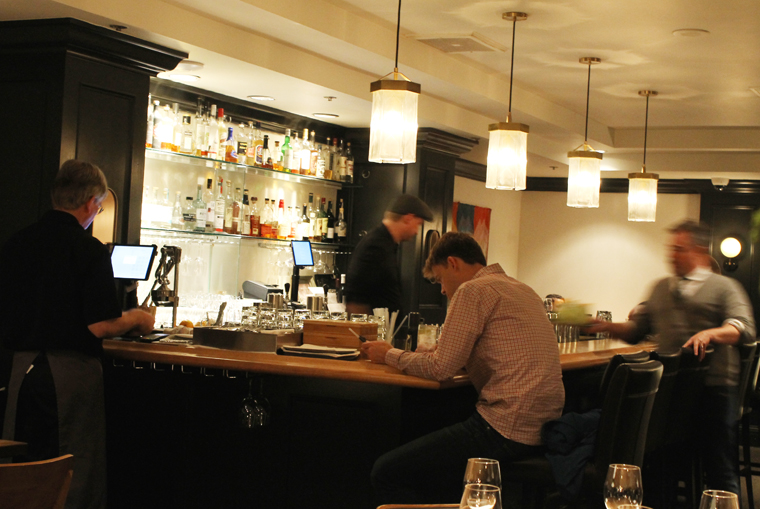 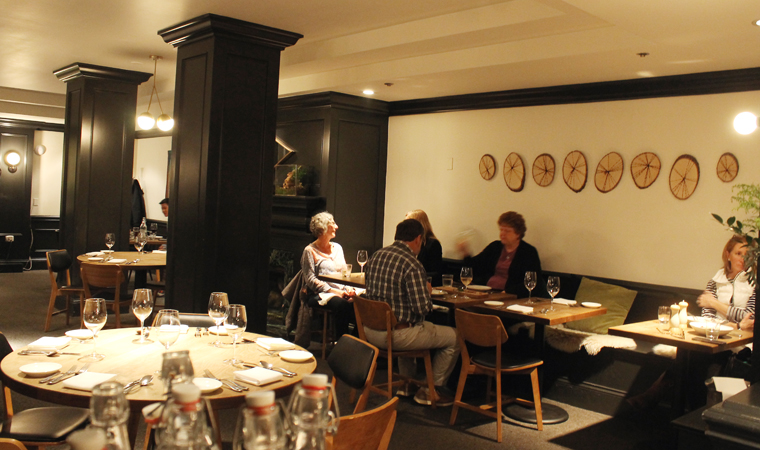 The dining area beside it.

Recently, I was invited along with other media to try some of the offerings on the new midsummer menu, which will be available June 19-25.

Among San Francisco restaurants, Plaj is definitely in the upper mid-range of moderate, with starters typically $11 to $20, and entrees $25 to $38. There’s also a four-course vegan tasting menu offered at $49. And cocktails are about $12 each.

The meal was served family-style, and covered one long table that sat about a dozen of us.

Cocktails were imbibed throughout, including “Wine & Flowers,” a crisp and refreshing blend of Sauvignon Blanc, ginger and cucumber shrub, and seltzer — all poured into a glass that had a long thin slice of cucumber wrapped around the inside. 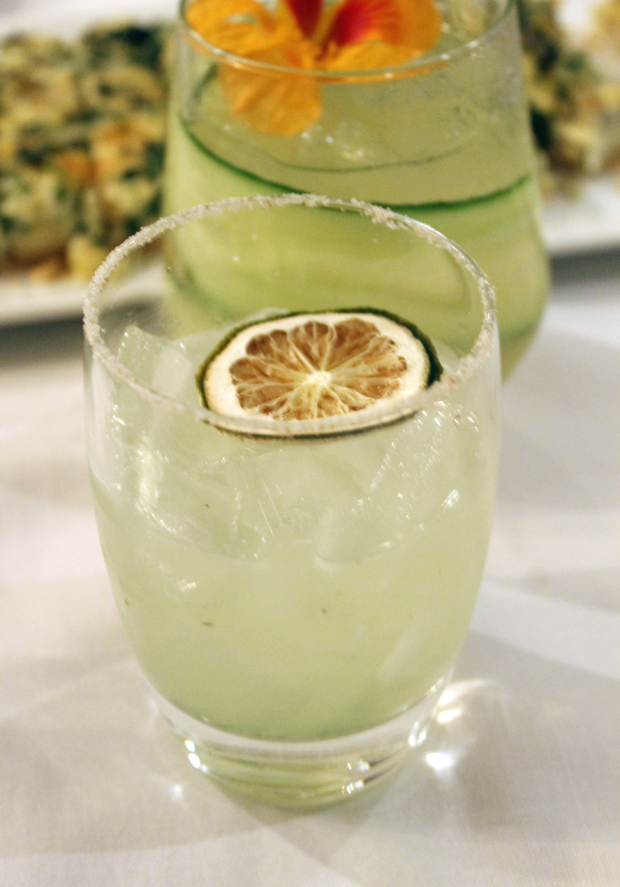 “In the Sun” cocktail. 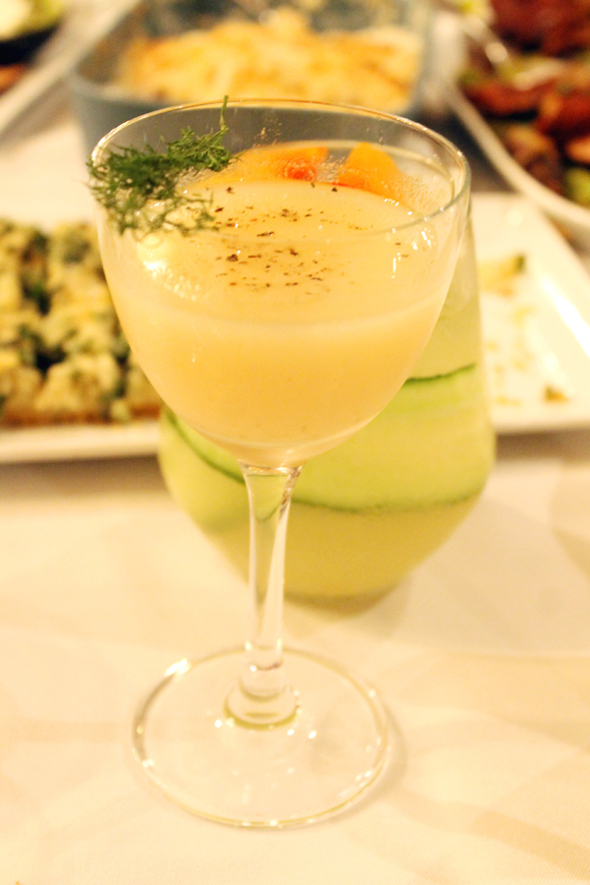 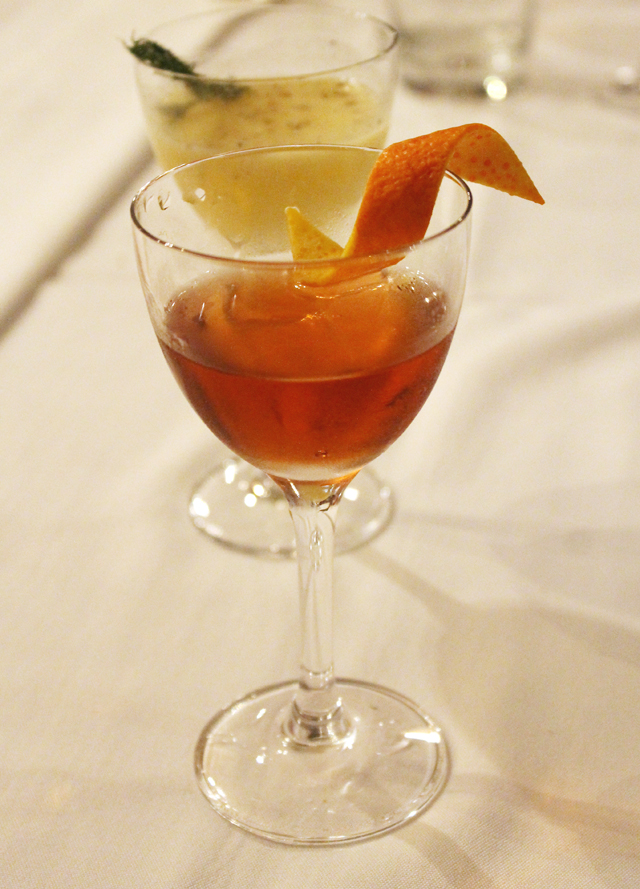 “Evening Fix” with an unusual spirit.

“In the Sun” is like a Swedish margarita, but made with aquavit instead of tequila, and a touch of heat from jalapeno. “Swedish Gold” was probably the most unusual cocktail — a sunny yellow drink made with gin, dill, lemon, honey, black pepper, and mustard. In fact, the first sip made me think of a hot dog immediately. How funny is that? But it definitely has the unmistakable sharp piquancy reminiscent of that ballpark staple. “Evening Fix,” is a potent blend of gin, sweet vermouth, Campari and Spirit of Hven Organic Summer Spirit, a unique Swedish spirit made with elderflower, apple, rhubarb and orange bitters. 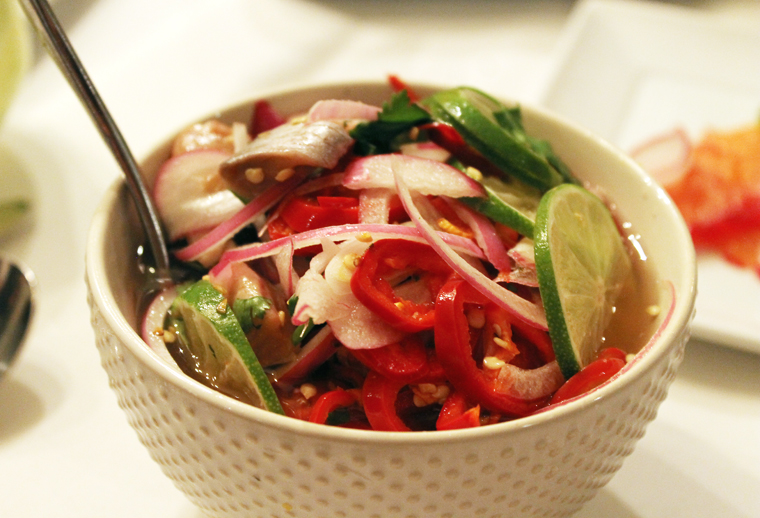 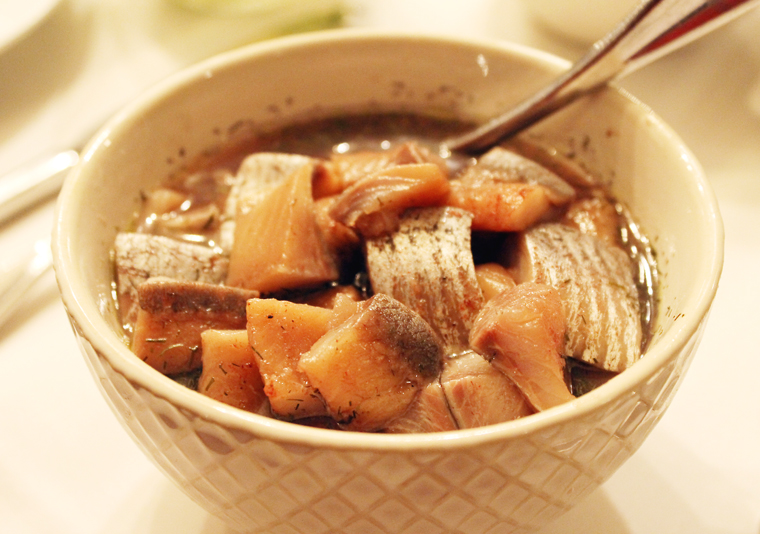 Herring aged in an oak barrel.

I’ve had my share of pickled herring — but never in the varieties that are presented here. Sundell likes to push the envelop, making herring flavored with curry apple, tomato and fennel, and even a chili-cilantro with the flavors of Thai cuisine. He also ages herring in oak barrels. It carries a pungent whiff and tastes a little like a less salty Vietnamese fish sauce.

The bread basket — or plate in this case — was groaning with various rye breads and crackers, along with whipped butter. 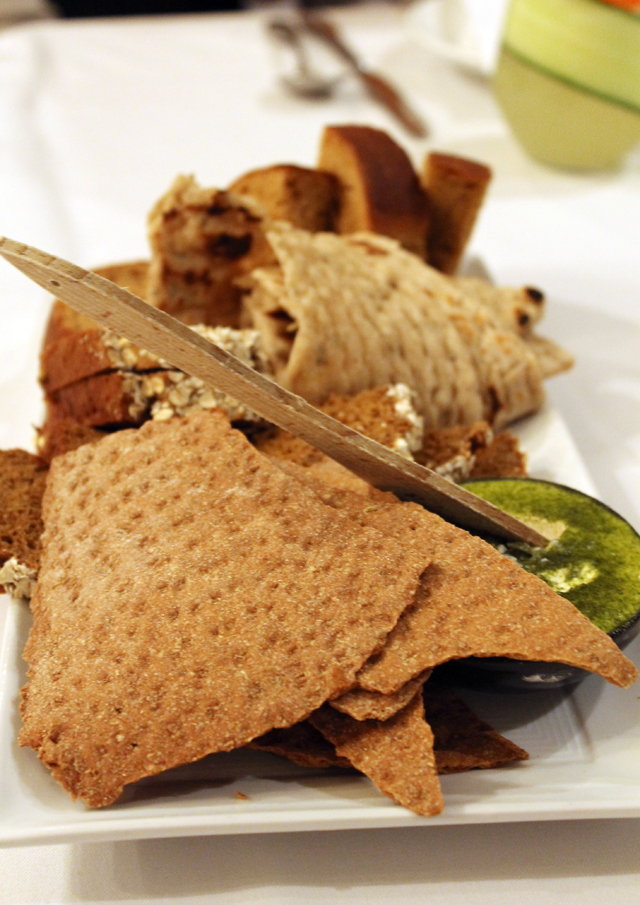 Swedish cheese pie is almost like quiche in texture but with a plethora of dill and ramps that imbued it with a bold taste of a bountiful garden.

The Gravlax & Hovmastaras is a platter of the silkiest cured salmon, topped with a creamy mustard-dill sauce. It would have been fabulous on a bagel. Or just enjoy it with some of that great Swedish bread instead. 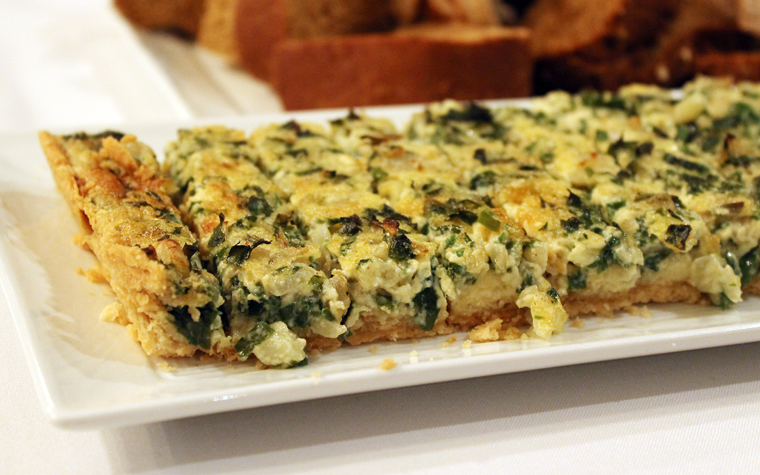 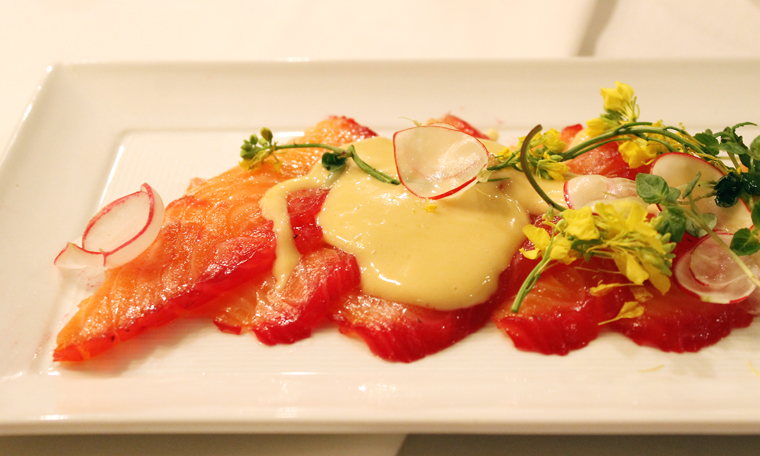 There was more salmon in a dish that featured the rich fish smoked in thick fillets, drizzled lightly with dill mayonnaise and garnished with a flourish of spring morels, favas, and asparagus. The salmon was so moist, with almost the delicate texture you get from poaching. 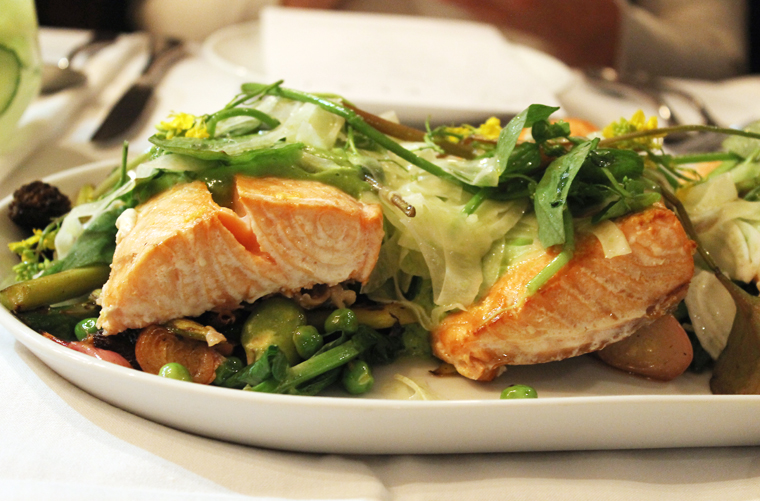 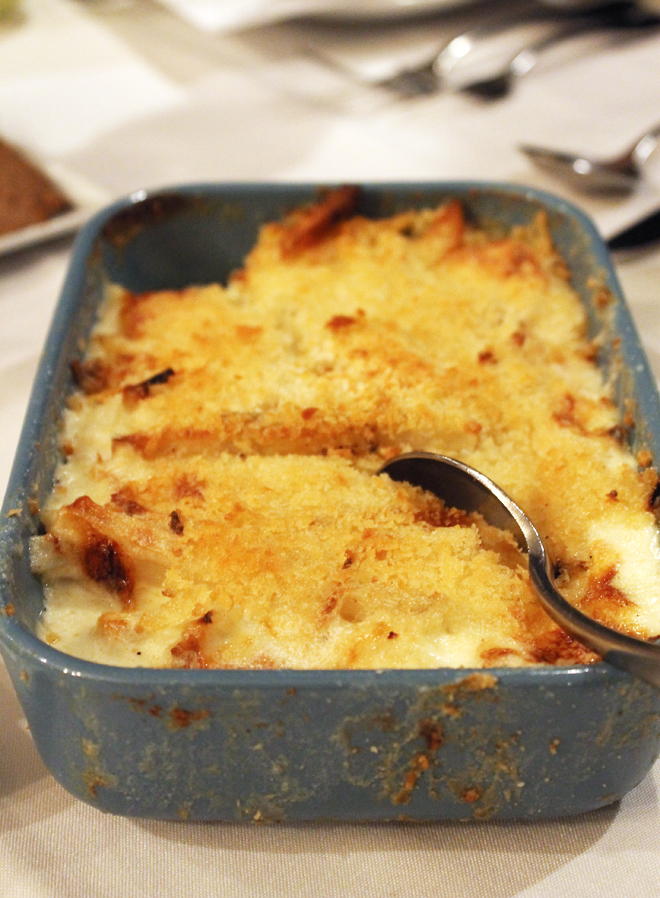 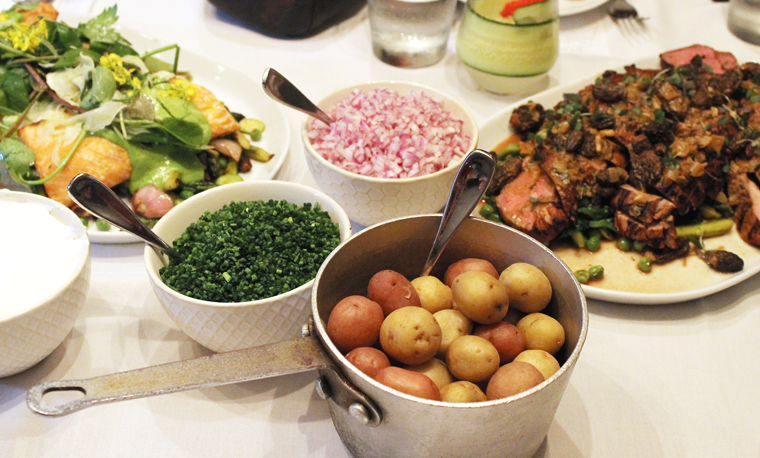 Just some of the dishes arranged on the table.

Grilled pork tenderloin was smoky tasting and supremely tender, not at all dry like this pork cut can often be. And a gratin of cheesy, buttery root vegetables was as hard to resist as any on a Thanksgiving table. 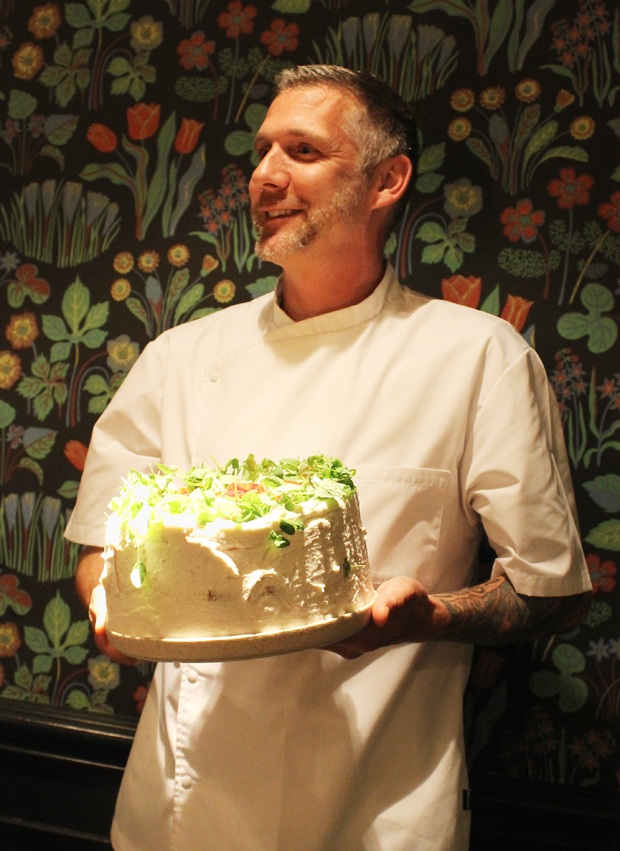 For dessert, the chef brought out an entire strawberry cake, garnished with a window-box-full of baby mint leaves. Moist and creamy, and with a touch of rosewater perhaps, the substantial cake was a sweet way to highlight spring-summer berries at their finest. 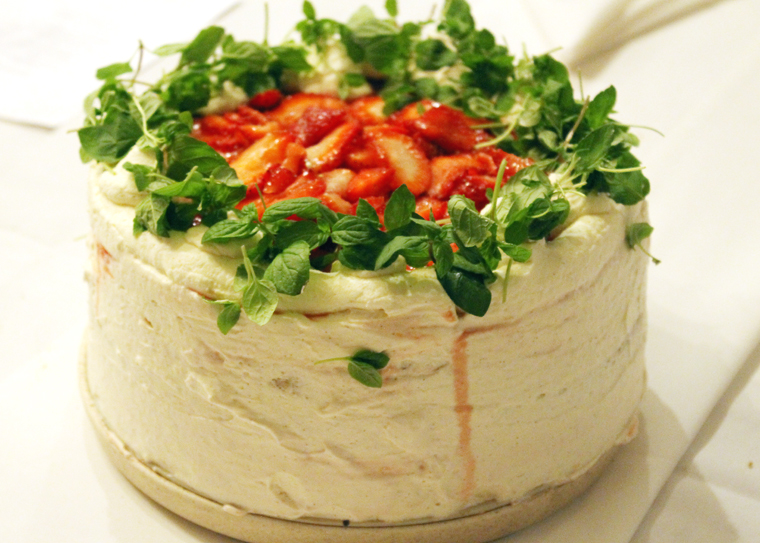 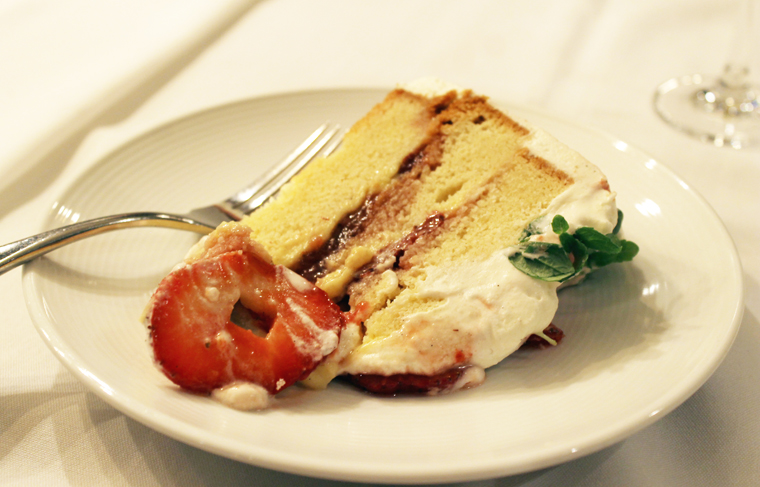 Andrea Sundell says that expat Swedes often visit and remark that they haven’t enjoyed flavors like this since their grandmother was alive.

Plaj adeptly manages to mix the old with the new, and in the process re-imagine what Scandinavian food can be.