Tony’s Seafood Is SO Worth The Drive 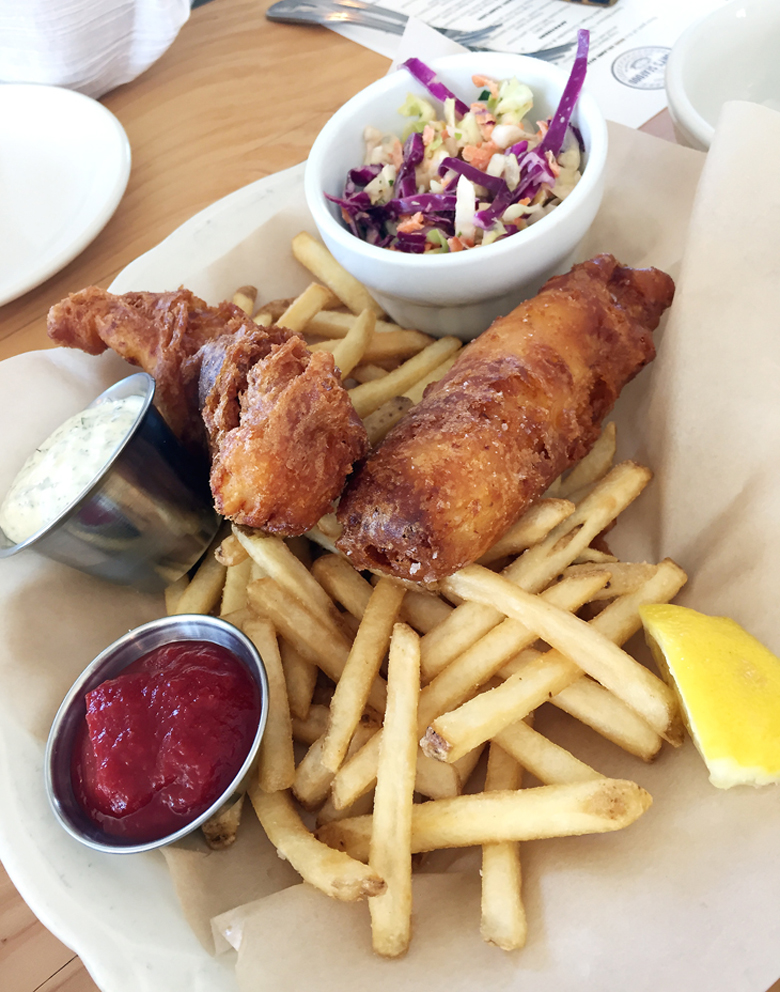 Marshall, on the northeast shore of Tomales Bay, is not a quick hop, skip and a jump for most of us to get to. But if you make the trek, often along a narrow, twisty road, depending upon the route you take, you will be deliciously rewarded. Much like the end of a rainbow, what awaits is gold.

Or Tony’s Seafood to be exact.

The throwback seafood shack on Highway 1 founded in 1948 by a local fisherman. Last year, the venerable Hog Island Oyster Company, just up the road, took it over, embarking on a massive renovation that shored it up yet kept its seafaring spirit. 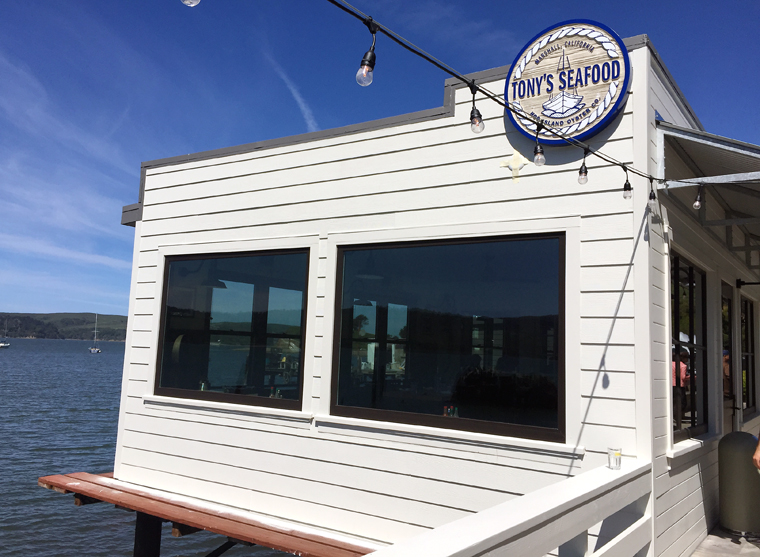 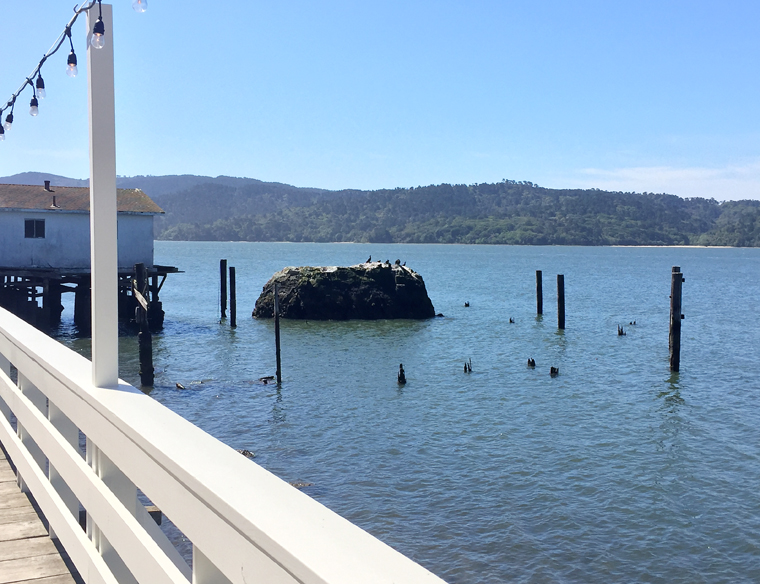 How’s that for a view?

It reopened earlier this spring. I had a chance to check it out at a media luncheon held on a warm, sunny day — the kind this place was made for.

Tony’s Seafood sits on pilings, jutting out into the blue water. When you dine here, you feel like you’re floating in the sea.

Chef Matt Shapiro, who cooked at Hog Island for five years, and at Wise Sons in San Francisco, is an avid fisherman. His cooking respects the seafood, that’s as fresh as it gets. 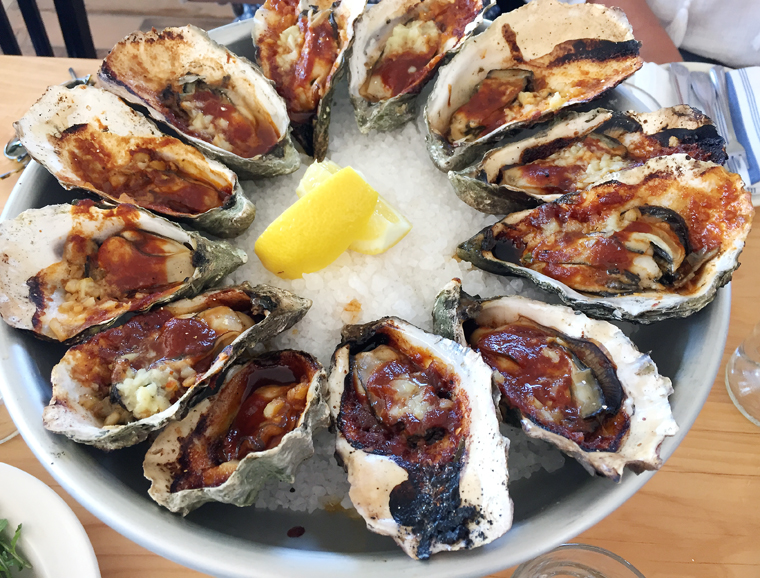 The barbecued oysters are not to be missed.

The restaurant was always famed for its barbecued oysters. They remain on the menu ($16 for four), but have been finessed with house-made barbecue sauce that’s plenty smoky tasting, as well as butter and garlic. I love oysters on the half shell. But wow, these barbecued ones might almost supplant my favorite raw ones. 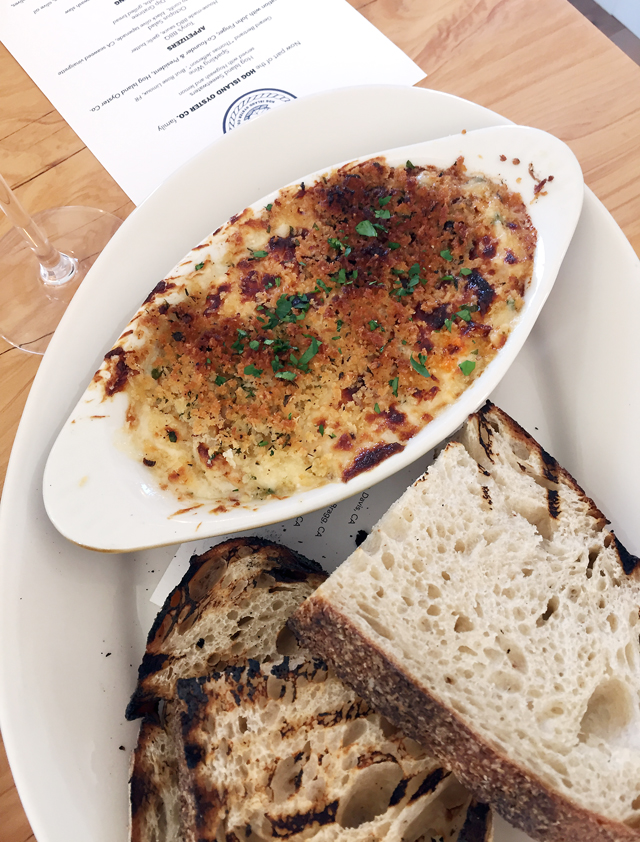 Crab dip gratinee ($19) is what you wish every party host served. It’s luscious with mornay sauce and plenty of crab. Best yet, it comes with hearty, hearth-baked Della Fattoria bread that’s been grilled.

Even the salads are special, including the octopus one ($19), chockful of tender chunks of tentacles on a bed of arugula with a zesty California-seaweed vinaigrette; and the California Albacore Nicoise ($17) scattered with olive-oil poached tuna atop Little Gem lettuce and perfectly ripe, smooth avocado. 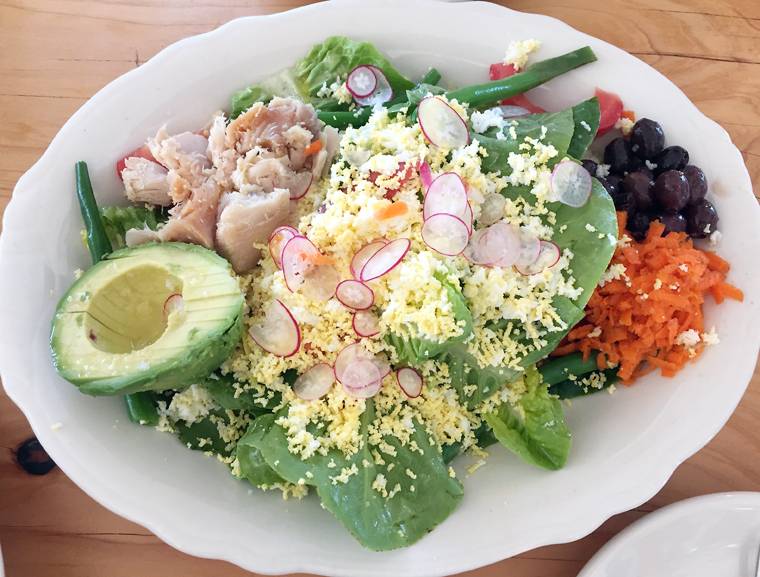 A Nicoise with olive oil-poached tuna. 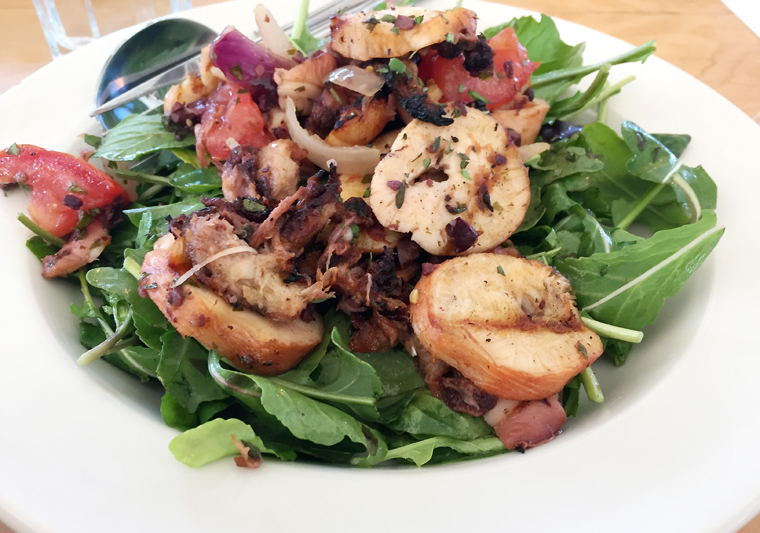 You’ve never had so many clams in linguine ($22). A mountain of clams covers the pasta, so much so that it looks like it’s almost entirely a heap of bivalves in the dish. A classic anchovy, garlic, shallot, capers and white wine flavors it all. 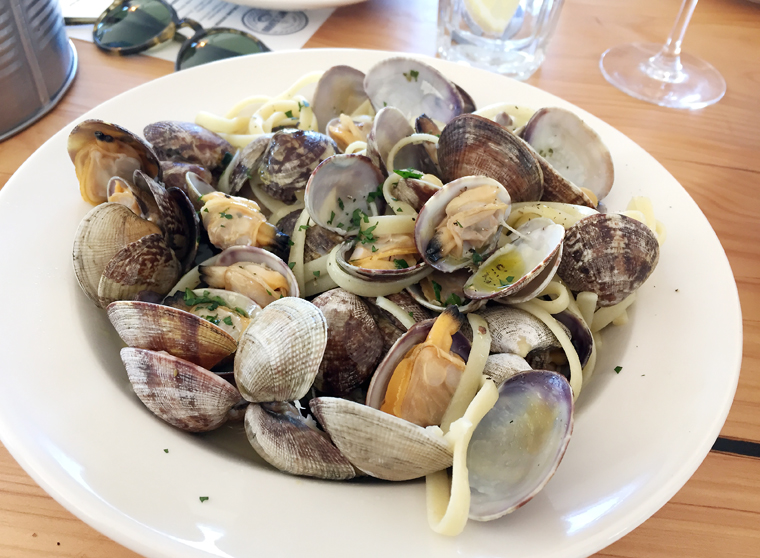 Yes, there is actually pasta hidden underneath all those clams. 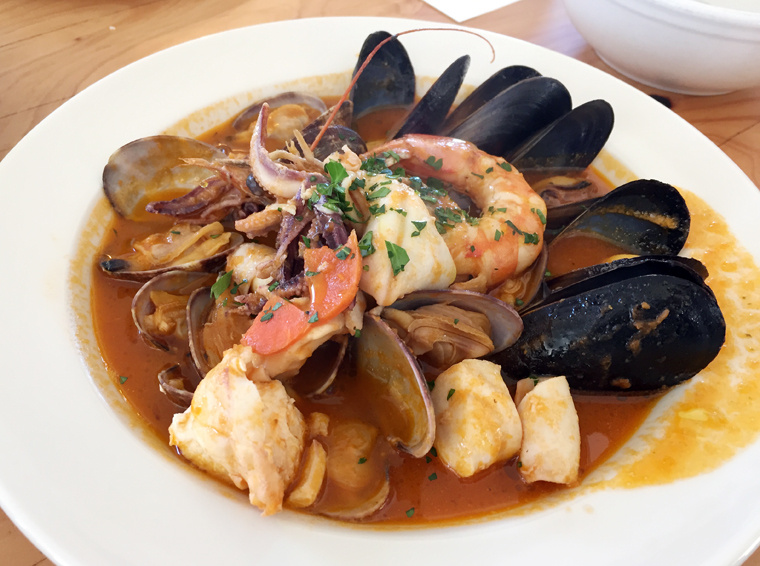 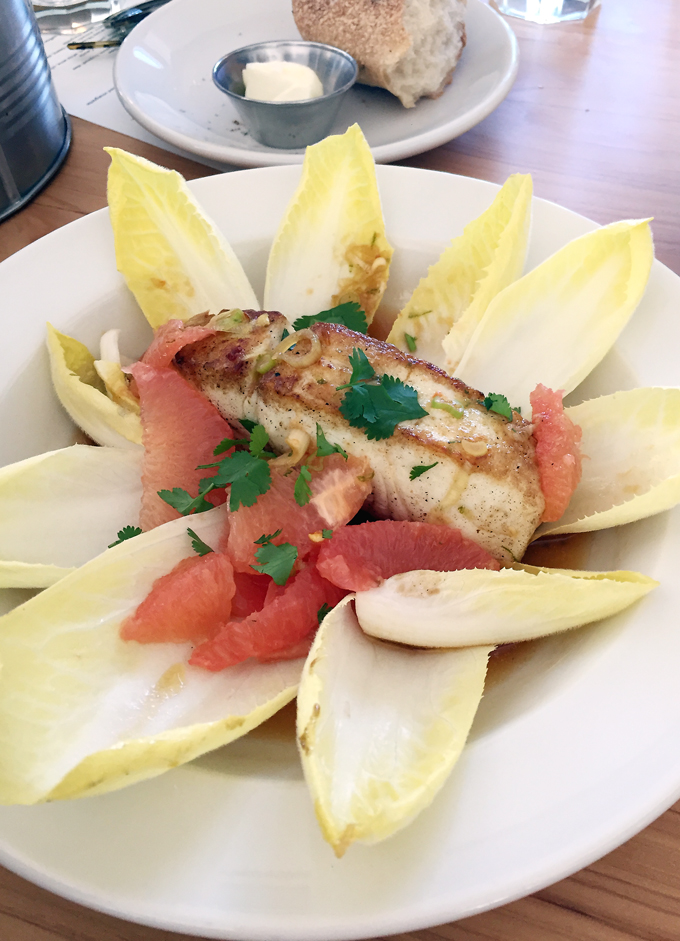 Seafood Stew ($26) takes its cue from cioppino, but with a real deep dive of shellfish flavor in the saffron-perfumed broth.

The fish and chips ($21) are outstanding, with big pieces of Alaskan cod, battered and fried to a crisp shell that shatters audibly with each bite. House-made tartar sauce accompanies, along with a slaw that’s creamy, but not drowned, and golden french fries.

Specials change daily, and that afternoon included Alaskan halibut served atop endive and juicy grapefruit segments with an Asian-inflected soy-chili vinaigrette. It made for a light, refreshing dish with punchy flavor.

For dessert, there’s everyone’s favorite Straus soft-serve ($5), with choices of toppings ($2 to $3) that include Maldon salt and extra-virgin olive oil; aged balsamico; macerated summer stone fruit; and sesame seaweed brittle that’s a little nutty, a little salty, a little sweet, and all crunchy. 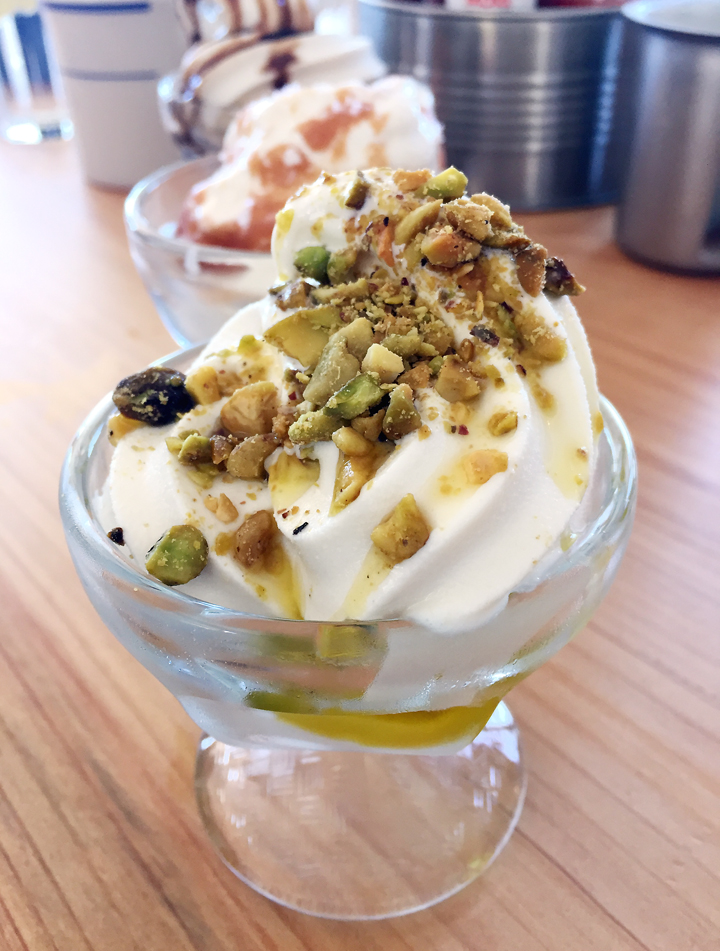 While the hours away at Tony’s Seafood on a beautiful day, and feel as if you’re on vacation.

For more on the revamping of this iconic restaurant, read my story in the current issue of the Nob Hill Gazette.