Chef Nora Haron Makes Local Kitchen All Her Own As the former chef of Drip Line in Oakland and head kitchen manager for Blue Bottle Coffee in Oakland, Nora Haron has built a solid reputation in the East Bay.

But now she has staked a firm foothold in San Francisco, taking over the reins this year at Local Kitchen & Wine Merchant in the South of Market district.

The once Italian menu has been transformed by the Singaporean-born chef’s Southeast Asian flair. She’ll be the first to tell you that what she cooks is not rigidly traditionally authentic. Instead, she takes liberties, injecting her own personal preferences into the mix, as I found out when I was invited in as her guest recently.

When Haron is in the house, you know immediately. She is a gregarious, warm presence, sort of like the Asian auntie who invites you over to her house, then fills you to the gills with her home-cooking, thinking that if you don’t leave with a full belly, something is seriously wrong. Chef Nora Haron took over and put her own spin on the menu earlier this year.

When she finds out that a young couple dining for the first time just moved into the neighborhood from out of state, she stops by to chat at length. When she discovers that another table of six includes a few Singaporean natives, she immediately brings over a bowl of her curry for them to try.

The modern restaurant, done up in clean lines, has an open kitchen with a pizza oven.

The menu, while heavily focused on Southeast Asian specialties, is pretty eclectic. 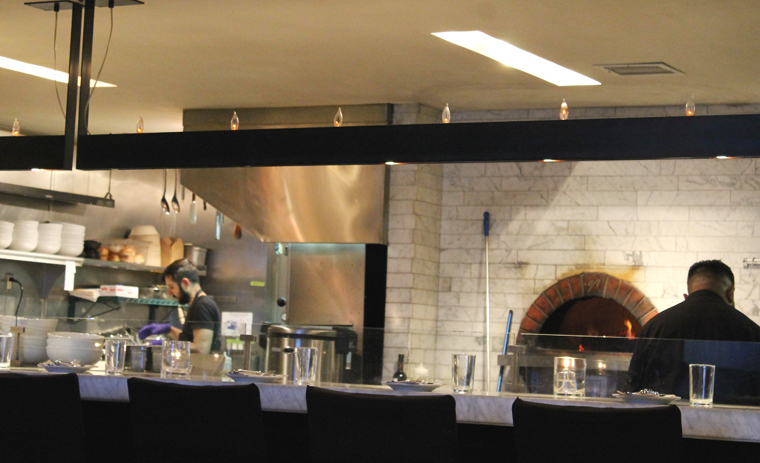 I’ve had my share of green mango salads, but this one ($18) is truly unique. It has all the brightness and lightness of others, but way more umami punchiness thanks to a black garlic-sesame vinaigrette. It’s also a lot more interesting. While there are the requisite long julienned strips of the firm, unripe mango, they’re mixed with shavings of asparagus, as well as fried shallots, dried shrimp, Thai chilies, and macadamia nuts. Savory, spicy, and salivating-inducing, It’s one of those dishes you can’t stop eating. 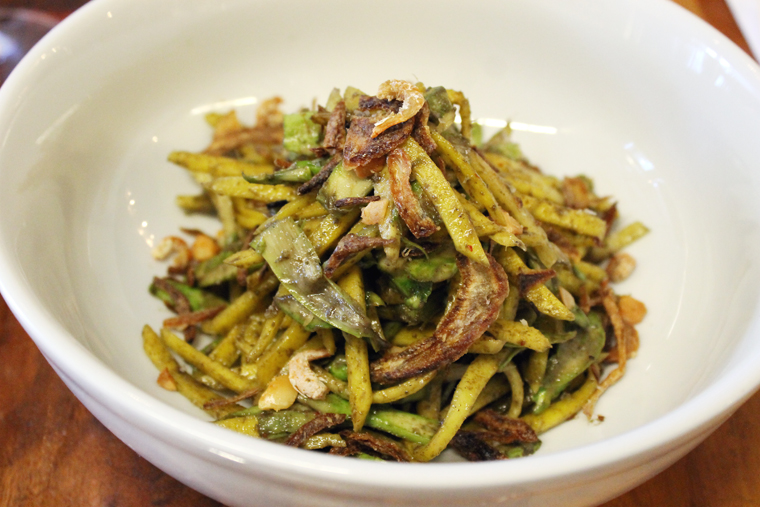 Chicken satay ($12) brings thigh meat skewers that are charred on the outside and moist within. The accompanying peanut sauce is based on Haron’s mom’s recipe. It’s thick, toasty and intensely nutty tasting as Haron takes the time to roast the peanuts, herself.

Rice flour-battered asparagus, cauliflower and other veggies get seasoned with turmeric, then fried till deeply golden. The fritters ($11) come with a tangy tamarind sauce to dip into. 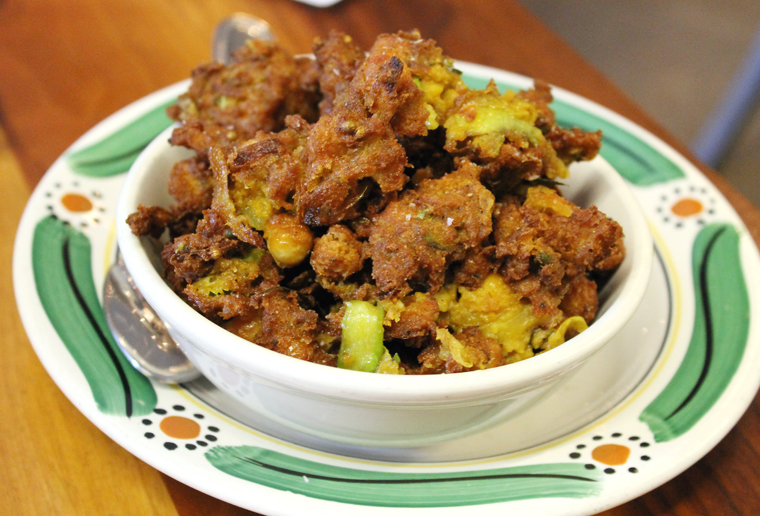 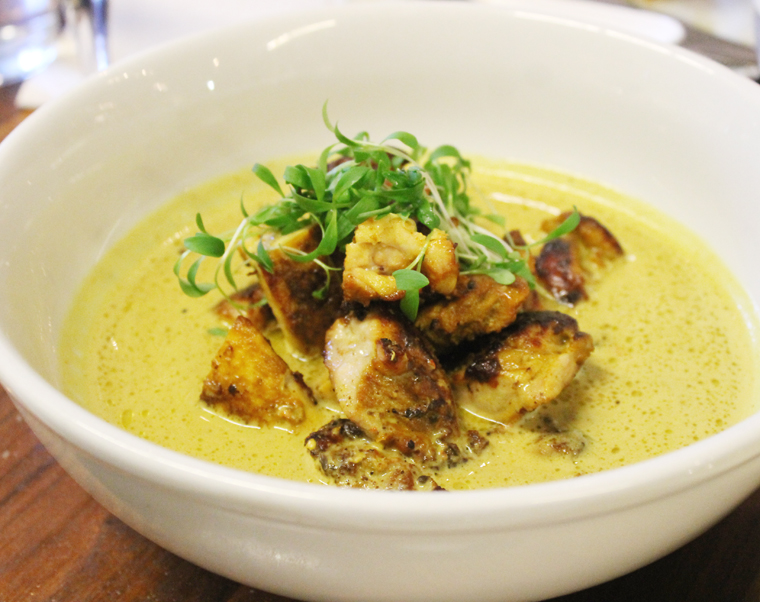 Whenever I spot Singaporean chicken rice ($18) on a menu, I always order it. It’s a total comfort dish of poached chicken served with fluffy rice imbued with chicken fat and broth, that comes with a bowl of the chicken broth on the side, as well. Haron uses only chicken thighs for utmost succulence, and she gives them a flash fry after they’re poached so that the usually flabby skin turns crisp instead. There’s a sweet-spicy soy sauce to add extra flavor, too.

Haron’s grandfather lived in Kerala, India, so she’s justly proud of having a Kerala-style chicken curry ($18) on the menu. The chicken pieces are submerged in a creamy, rich, mild, yellow curry. You’ll want plenty of rice to soak up all the lovely sauce. 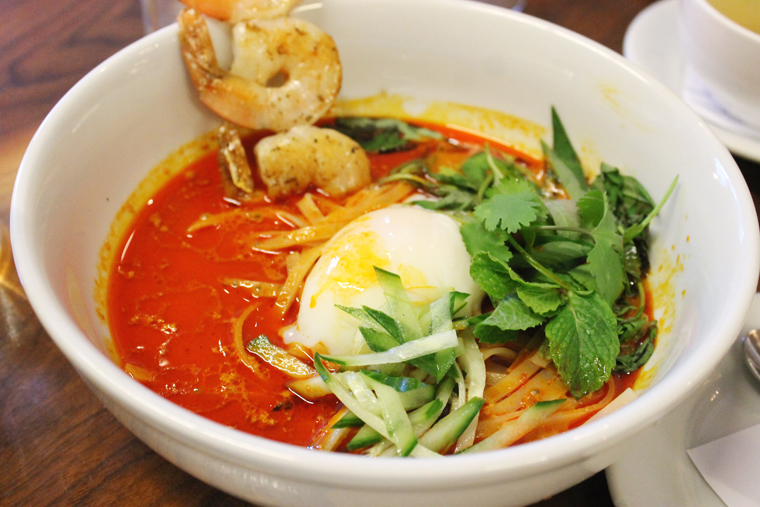 Ever since she served it a pop-ups in the East Bay, her laksa has drawn a following. On the menu here, it’s listed as “curried rice noodles” ($18), because she feared people wouldn’t know what the Malaysian spicy curry coconut noodle soup was. But after an Australian couple came in specifically for laksa and were confused when they didn’t recognize it on the menu, Haron may rethink how she lists it now.

The rice noodles are submerged in a brilliant and dangerous looking deep orange-red broth. Yes, it’s spicy, but not searingly so. So don’t be afraid. The broth is plenty satisfying, warming the throat and the stomach with Asian peppery spice. A skewer of grilled shrimp pokes out of the boal, and a poached egg floats in the middle. There’s a little dish of extra sambal for those who want even more heat. Yes, she makes that herself, too. It’s plenty hot, but has a nice sweetness, too. 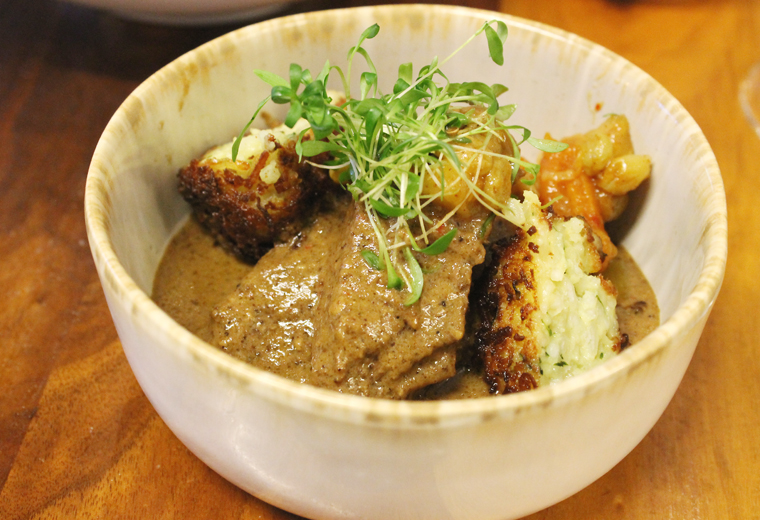 Beef rendang with an intriguing arancini. Another pizza with seasonal veggies.

The pizza list features standards like pepperoni, but also some very unusual ones like the beef rendang ($21). Haron says she got the idea for it when she was dipping some leftover flatbread into the stew. As a pizza, it is like Sumatran beef stew smeared atop crust — earthy, beefy, and hearty. Yes, this pizza also has chunks of pineapple. But the pineapple is part and parcel of the rendang, as was shown when she brought out a separate little dish of it to try that comes with a fun turmeric-scented arancini. The pineapple both in the stew and on the rendang pizza adds a nice hit of acidity to cut through the heaviness of the brisket.

If that pizza is too out there for you, there’s the seasonal vegetables one ($19) instead that’s topped with creamy cauliflower puree, shiitake mushrooms, roasted tomatoes, more pineapple, pistachio sambal, and house chili oil. It definitely has a more interesting mix of vegetables than most standard veggie pizzas. The sambal and chili oil don’t overwhelm the palate, either, adding just enough spiciness to tickle the taste buds.

Haron revamped the former pizza dough used, creating a sourdough one instead. The flavor is great, with the notable tang from the fermentation. But it’s a dough that rises a lot, creating a quite hefty, bready crust, which may not be everyone’s ideal. 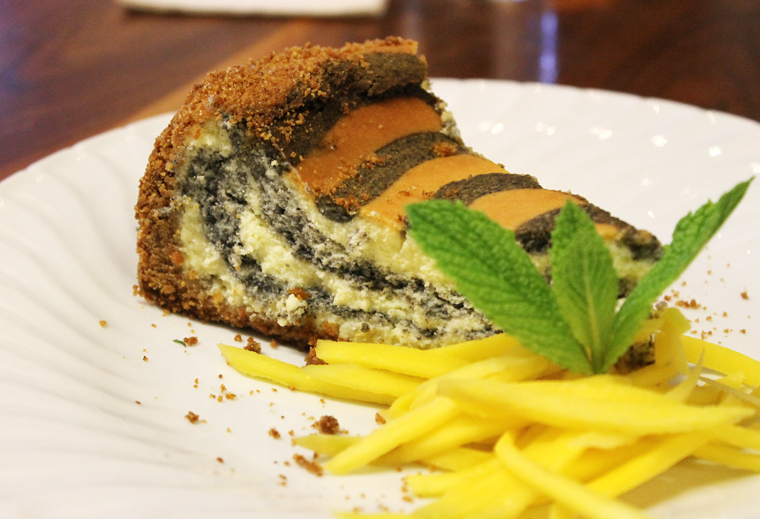 Don’t skip dessert. As a trained pastry chef, Haron admits that baking is her happy place. It shows in her black sesame cheesecake with ginger crust that’s served with crunchy fresh mango slivers. Her house-made black sesame paste is swirled inside the cheesecake, creating tiger-stripe ripples. It’s creamy, not too sweet, and quite roasty-nutty tasting.

You will leave Local Kitchen full of food flavored with love — exactly the way Haron wants you to. 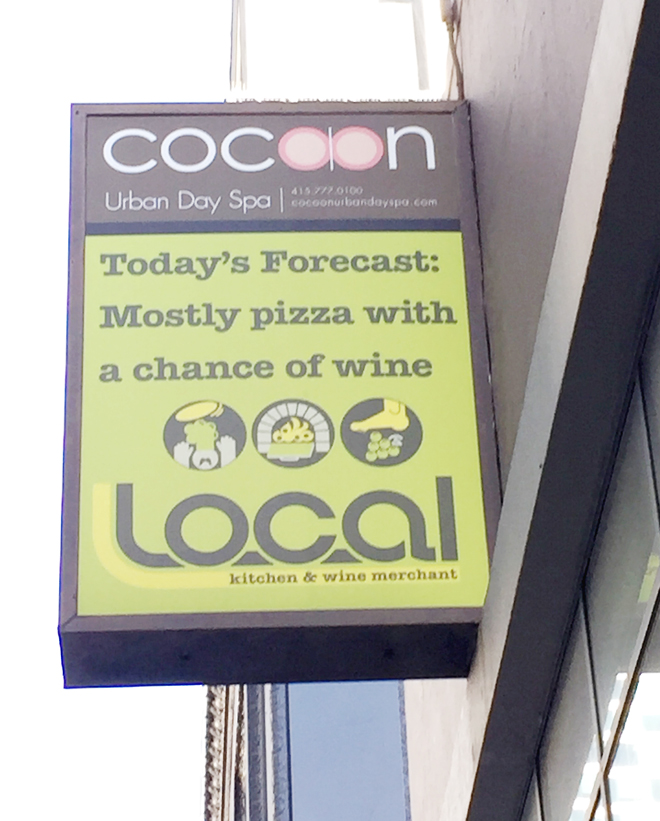 My kind of weather forecast.

And if you want to learn more about Haron or try your hand at making her laksa, you’ll find her featured in my forthcoming cookbook, “East Bay Cooks” (Figure 1), which debuts Sept. 10.