Pork Curry From The Box? You Bet!

It’s the first one that spotlights a recipe that wasn’t tested by me — but instead by my husband.

Because “Pork Curry From the Box” has special meaning for him.

Like so many of us of ethnic heritages, he grew up doing his darndest to disavow his. Wanting to “fit in” and be more “American” as a kid, he turned his back on the traditional Japanese foods his mother would cook. For a spell, he simply wouldn’t eat much of it. Not surprisingly, he never learned to cook any of it, either.

But now, like so many of us, he has deep regrets about that. He misses the aromas and tastes of home-cooked Japanese food. He longs for certain dishes his Mom would make, especially now that she’s no longer alive to cook them. Older and wiser, he now appreciates them in a way that he couldn’t before.

So when a review copy of “The Gaijin Cookbook: Japanese Recipes from a Chef, Father, Eater, and Lifelong Outsider”

(Houghton Mifflin Harcourt, 2019) landed in my mailbox, he grabbed it before I could, and started leafing through it with an interest and intention I hadn’t seen before.

The book is by Ivan Orkin, chef-owner of New York’s Ivan Ramen and Ivan Ramen Slurp Shop; and Chris Ying, co-founder of the revered and now-defunct Lucky Peach.

END_OF_DOCUMENT_TOKEN_TO_BE_REPLACED

Forget any ifs, ands or buts, because this, my friends, is the tastiest chicken soup you’ll ever slurp up.

The kind that makes your eyes widen in unexpected pleasure from the first spoonful. The kind that boasts layers upon layers of deep, full, satisfying flavor. The kind that nourishes and comforts no matter if you’re ailing or just in need of something wonderfully warming.

The secret is that the chicken in the soup first gets roasted. In fact, the entire soup is mostly made in the oven, concentrating the flavors and leaving the chicken as tender and moist as your favorite rotisserie bird.

“Limon Omani Oven-Roasted Chicken Soup with Celery Seeds” may have a long name with an ingredient or two that may give you pause. But don’t let that put you off from what is essentially a quite easy recipe that delivers more than you’d ever expect.

The recipe is from the new “Mastering Spice: Recipes and Techniques to Transform Your Everyday Cooking”

END_OF_DOCUMENT_TOKEN_TO_BE_REPLACED

Meyer Lemons Part I: The Quick and the Savory This is what I call an ideal lemon chicken.

Lemon chicken may be a mainstay of Chinese restaurant menus, but I never order it.

Battered to oblivion, and tossed with a gloppy sauce that tastes more of sugar than citrus, it just doesn’t appeal.

Melissa Clark’s “Sauteed Chicken with Meyer Lemon,” however, is much more my style.

The veteran cookbook author and New York Times food writer does swaps out the deep-frying for stir-frying instead. That means this dish comes together in no time and with no mess.

What’s more, you can really taste the fresh, bright Meyer lemon in this dish.

END_OF_DOCUMENT_TOKEN_TO_BE_REPLACED

Baby, It’s Stew Weather Out There 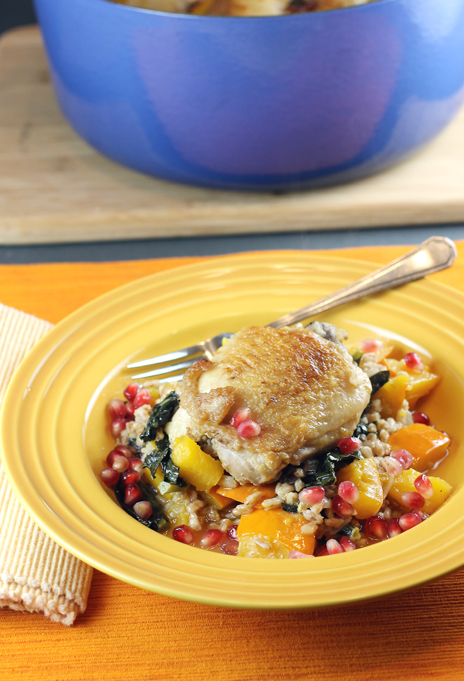 Dig into a bowl of tender chicken, squash, pomegranate seeds and kale. What more could you want?

Brrrrr. The perfect time to turn up the stove is when the temperatures dip.

After all, you not only warm up the house, but yourself, as well.

Especially if it’s with a one-pot dish that’s simple, comforting and loaded with good-for-you ingredients.

Let’s face it, we probably all over-indulged over the holidays. What better way to start a new year then with a cookbook that spotlights the nutritious ingredients of “Greens + Grains”? The cookbook (Chronicle Books), of which I received a review copy, is by my friend Molly Watson, a former staff writer for Sunset magazine. I’ve always loved Molly’s snarky sense of humor and no-nonsense way of doing things. 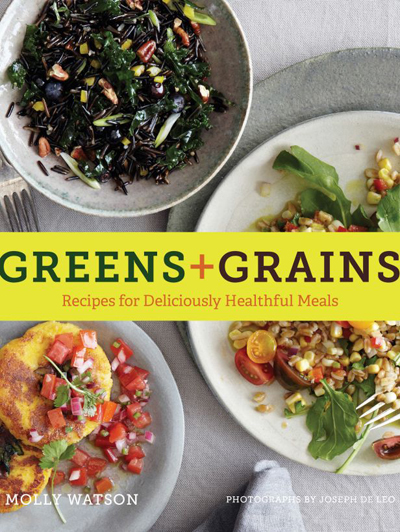 In her debut cookbook, she takes you through the world of grains and greens, giving advice on how to choose, store and cook them. Learn all about purslane to stinging nettles, buckwheat to millet, and everything in between. There are plenty of vegetarian recipes, but enough meat-based ones, too, to make this an ideal cookbook for anyone wanting to expand their plant-based eating in the new year without feeling deprived in any way.