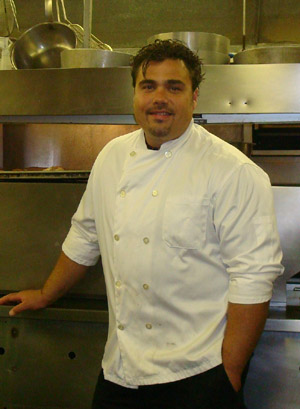 The restaurant industry can be a nail-biting, roller-coaster ride. But few chefs have weathered as many jolting ups and downs as Justin Perez.

In 2003, his small Buca restaurant in Campbell faced a David-and-Goliath fight when restaurant chain Buca di Beppo, which has more than 30 locations nationwide, threatened a lawsuit because it believed the name of Perez’s restaurant was too similar and could confuse customers. Rather than face an expensive legal battle, Perez renamed his popular establishment, Restaurant O.

Two years later, a bizarre incident occurred while Perez was relaxing with his family at their San Jose home. A hysterical woman came running up to them, screaming that her husband was going to kill her. Perez and his family took her into their home and called police for help.

His good deed, though, soon turned into a horrific nightmare. His house was subsequently fire-bombed, and bricks hurled through his front windows. The husband’s brother was later convicted of those crimes, but not before Perez, his wife, and their young children were severely traumatized.

In 2006, with his life back together, Perez spent $30,000 to renovate Restaurant O. He did all the work, himself, with the help of a few friends, only to discover a year later that his landlord was selling the property to make way for a senior retirement project there instead.

As word spread about the plans, diners stopped going to the restaurant, believing it was already closed. With so little business, Perez was forced to shutter it.

He was crushed. Yet unbelievably, the worst was yet to come.

I caught up with the 37-year-old chef, who somehow has remained indefatigable through it all.

Q: Your life has been a soap opera, hasn’t it?

A: We used to actually say, ‘As the O turns,’ when we had bad days at Restaurant O.

Q: And after Restaurant O closed, that wasn’t the end of your struggles?

A: No. Around that time, I found out my former director of operations had embezzled about $750,000 from the restaurant. I’d known him for 20 years. He was my best friend. It was pretty devastating.

Q: How did you finally find out?

A: He got really sick last year, and had to stop working. That’s when we found out. He had taken out loans and forged my name on them. We’d give him money to pay the taxes, but we ended up owing more than $300,000 in payroll taxes to the IRS. At one point, I owed close to $1 million to the IRS and to our vendors.

A: I mortgaged my two houses — the San Jose one my family lives in and the one in Oregon that my grandfather lives in. I tried to pay things down as much as I could, but when interest rates went up, that killed me.

I finally filed for personal bankruptcy. So I’m no longer the owner of my company. Chris Flippen, my director of marketing and sales, is. I’m just an employee.

Q: Where is your former best friend now?

A: He disappeared. We filed police reports on him. But nobody knows where he is now.

Q: I don’t know many people who could look so pulled together after going through something like that. How have you managed to do so?

A: I’m back where I started, at square one. But I love it. I’m just happy I got through it. I survived.

Q: Your Restaurant O Catering company is now operating out of La Hacienda Inn in Los Gatos. How did that come about?

A: The owner wants to demolish the property for townhouses. But that won’t happen for a couple years. So he offered it to me in the meantime. I’ve been here since March. The building we have is twice the size of what we had at Restaurant O. And we use the patio for hosting the special wine dinners that we do each month.

Q: Have your customers remained loyal or have they been scared off by the bankruptcy?

A: They’ve been great. They just want me to open a restaurant again. But in this day and age, who would want to put money into that now?

We actually have a potential space — the Baker’s Square down the road. The site is right, and I have been talking to an investor. I’m not sure it will happen. We’ll just have to see.

Q: How have you changed because of all you’ve been through?

A: I used to be so enthralled with myself, and it was getting me nowhere. I started caring about everything else in my life. I put family first. If I’m not destined to be Wolfgang Puck or a millionaire, so be it. I just accepted myself for who I am.

Q: What ingredients make up Justin Perez these days?

Q: What does the future hold?

A: It can’t go anywhere but up. It can’t. (laughs) The catering will continue to grow, and the restaurant will happen some day. I’m smarter now. I’m watching everything myself now. I think I’ll not only be back where I was, but I’ll be better.