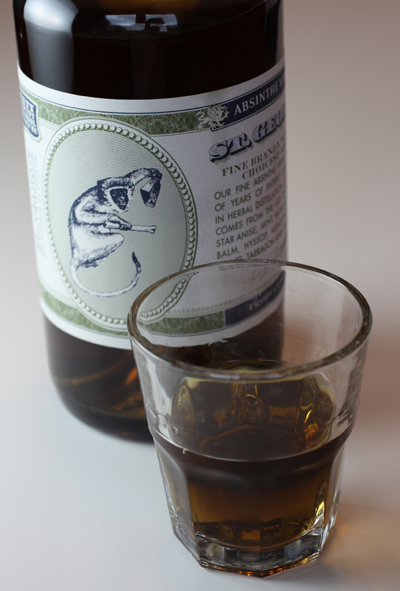 You’ve all heard the commotion about the once illicit spirit, absinthe, not only being legal again, but even being made domestically in the good ol’ Bay Area.

Absinthe had been illegal since 1912 because of supposed health concerns. It was thought that the chemical thujone, which is found in the herb wormwood (used in the making of absinthe), affected the brain. But that view has largely been debunked.

With so many afternoons at the keyboard already leaving me feeling brain dead at times, I thought I’d give it a shot. Admittedly, as someone who is far from fond of black licorice, I was both wary yet curious to try the spirit that the U.S. Alcohol and Tobacco Tax and Trade Bureau made legal again in 2007.

Turns out my first experience with the Green Fairy was all wrong.

Last year, Yankee Pier at Santana Row in San Jose started featuring Absinthe Verte made by Alameda’s own artisan distillery, St. George Spirits. A small sherry-size glass came to the table. The moment it was set down in front of us, I could smell the powerful herbal, anise aroma. The Absinthe Verte was served straight up. After seeing old movies where water is slowly dripped over a sugar cube into the green tea-colored spirit to temper the bitterness of the wormwood, I wondered if I shouldn’t be drinking this somehow diluted. The server assured me this was the correct way.

So I took a small sip, as did my hubby. It’s STRONG, to say the least, with a medicinal-like quality to it. You feel the heat of the alcohol spread down your throat down your esophagus. Some of you may already remember that my hubby likened it to Vick’s VapoRub — but in a good way. Indeed, this would cure any chest cold in a jiffy.

Fast forward to last summer when I got to tour St. George Spirits. When I mentioned to the guy manning the tasting bar that I’d drank Absinthe Verte straight, he nearly fell over. “You DO know that’s 120 proof, don’t you?” he asked incredulously.

Oh boy, do I. Good thing my hubby and I split the one tiny glass or else we’d still be flat on our backs right now.

Tastiing Bar Guy told me the proper way to drink their absinthe was to just add a few ice cubes to the glass, and let them melt a little. The ice cubes/water will turn the absinthe milky, signaling it’s ready to drink.

It was still quite potent. But this time, the harshness of the alcohol was tamed a bit, bringing out more complex flavors, including basil and tarragon.

Tasting Bar Guy said I need not add sugar to their absinthe, which is more balanced than most. And indeed, I don’t think it needed that addition, either.

Absinthe might not be to everyone’s liking. In fact, Bay Area spirits writer Camper English advised me that if I didn’t really care for black licorice there were other brands of absinthe on the market that I would surely loathe because they tasted strongly of just that.

I admit that wimpy me can take absinthe in only small doses. But it’s definitely worth trying. I’m just glad I finally experienced it the proper way.