A Spirited Visit to St. George Spirits in Alameda 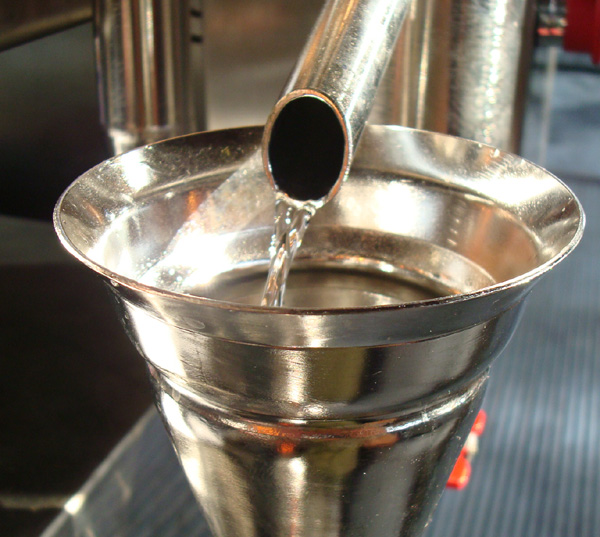 Examining a bottle of St. George Spirits eau de vie gives little hint of all it took to make it.

A clear, colorless liquid, eau de vie is French for “water of life.” It is a brandy distilled from fermented fruit juice. In the case of this Alameda artisan, small-batch spirits maker, each slender 350ml bottle took all of 15 to 20 pounds of fresh, ripe, often organic, fruit to make.

Producing eau de vie is a slow, labor-intensive process. For St. George Spirits founder Jorg Rupf, it’s also an absolute labor of love. And that’s no truer than at this time of year, when summer fruit is at its best and the gleaming copper stills at St. George are in full swing to distill pears, cherries, and raspberries down to potent yet smooth, thrillingly fragrant digestives. St. George Spirits is housed in an old airplane hangar on the grounds of the decommissioned Alameda Naval Air Station; hence the moniker of another of its famous spirits made there, Hangar One vodkas.

Aqua Perfecta (eau de vie) was its first product, when Rupf founded the company in 1982. A native of Germany, Rupf was that country’s youngest constitutional law judge at age 28. While on a research sabbatical in Berkeley in the late 1970s, he fell in love with the Bay Area, and its burgeoning farm-to-table philosophy in food and wine.

Those beliefs resonated with Rupf, who was born in Alsace, home to the world’s best-regarded eaux de vie, which were initially made by farmers who were seeking another outlet for their bumper crops of fruit. Indeed, Rupf often helped his grandfather distill the family’s eau de vie.

Transplanted to the Bay Area, Rupf couldn’t believe nobody back then was making hand-crafted eau de vie in this country.

“I figured there were so many Europeans living here that it would be a good market,” he said. “Plus, I was so excited about the quality of fruit here.” 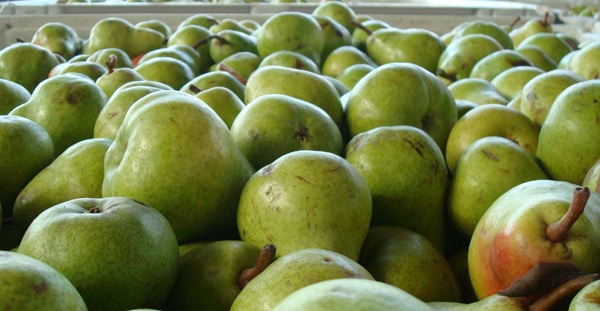 When it comes to eau de vie, fruit matters. Big time. Rupf sources the best fruit from California, the Pacific Northwest, and Canada. Black cherries don’t have enough intrinsic aromas for him, so he uses pie cherries instead. Bartlett pears sit in huge bins off to one side, waiting for just the precise moment when they turn yellow and perfectly ripe to crush. The flesh of the fruit is used to make eau de vie, as well as the skin, which contains a wealth of aromatics. Rupf explained.

Peer into a peephole window on the 450-gallon still and see the deep, milky fuchsia color of the cherry juice inside. It will take five hours to distill this one batch. 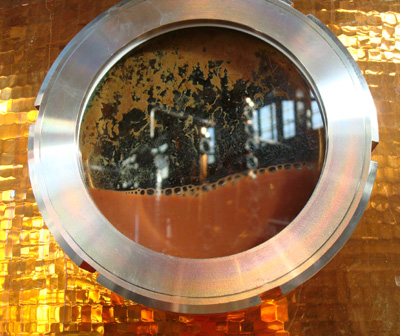 He sticks a finger into the clear liquid running into a funnel, gives it a taste, and smiles, satisfied. “If it’s not good coming out of the still, it won’t be any good, because we don’t do anything more to it.”

After it comes out of the still, the eau de vie is transferred to a stainless steel tank for a brief rest to settle down before being bottled. 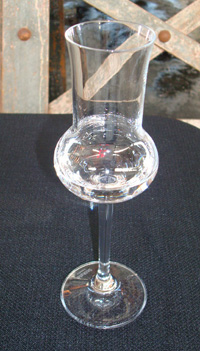 Eaux de vie were once made by monks and touted as a health cure, which is why it is called “water of life.” Purists enjoy it after a meal, at room-temperature in small glasses, specially designed to concentrate the aromatics. Nowadays, eaux de vie are mixed into all manner of cocktails, and quaffed before dinner. Newbie imbibers like to drink it cold. The 40 proof-spirits taste smoother when chilled, but the drawback is that the cold diminishes the aromatics.

And what aromatics they are. If all you’ve ever had are run-of-the-mill eaux de vie that sometimes taste rather artificial, those by St. George Spirits will be a revelation. The over-riding taste is not of high-burn alcohol, but of whatever fruit it is made from. Pour a little Aqua Perfecta Poire William (pear eau de vie) into a glass, and you will be greeted with a fragrance so intense that you will smell it even while holding your glass at waist-level. It is like pear perfume, an apt comparison given that perfumes also are distilled.

The taste is at once powerful, yet polished. The kirsch (made from cherries) has a bigger, more expansive explosion in the mouth than the pear, often considered a beginner’s eau de vi. The framboise offers up a concentrated raspberry flavor, and makes me immediately long for a piece of good dark chocolate to nibble with it. 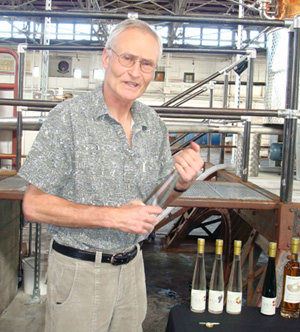 Rupf, and business partner, Lance Winters, who once ran a nuclear reactor on an Alameda-based Navy ship, like to experiment when they distill. They’ve also made quince and apple eaux de vie. And Winters is rumored to distill his Christmas tree every year. Talk about a novel way of recycling.

The $40 eaux de vie are available for purchase in specialty liquor stores. You also can buy them, Hangar One vodkas, single malt whiskey, and Absinthe Verte (yes, a new version of the fabled Green Fairy) at St. George Spirits. Some products, such as the Heirloom (apple brandy aged in French oak for five years, $50), are only sold here. Employees pack your purchases in whimsical, paper popcorn bags.

The tasting room is open Wednesday though Saturday, noon to 7 p.m.; and Sunday, noon to 6 p.m. Distillery tours also are given every Saturday at 1 p.m.

Visit this old hangar to launch your taste buds on a real trip. 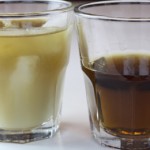