Take Five with Chris Cosentino, A Chef Who Is Offal Good At What He Does 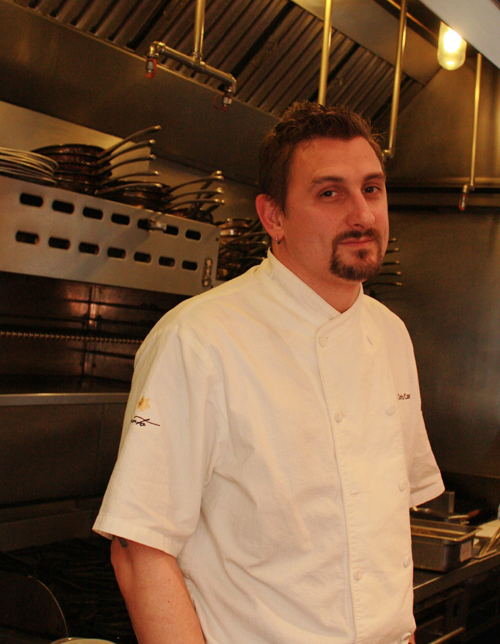 Particularly when it comes to sports, and cuts of meat.

A chef who designed stickers and T-shirts emblazoned with the slogan, “I Love Offal,” started his own salumi company last year, Boccalone, with Incanto’s owner Mark Pastore.

At Incanto, Cosentino is not shy about showcasing more unusual meat and seafood offerings, either. Bloater paste bruschetta, anyone? Get past the name to enjoy a luscious, creamy rich spread made from organ meats of a smoked fish. Wicked good.

Then, there’s the restaurant’s “Whole Beast Dinners” (starting at $55 per person, and you’ll need about 20 of your friends to enjoy it). Sit down to your choice of a whole roast suckling pig, lamb or goat carved tableside. Incanto sells two of those carnivore extravaganzas a month.

They’ve proven so popular that the restaurant just started offering a smaller version of that family-style meal: “Leg of Beast.” The four-course meal ($200 for 6-8 people) is centered around a whole leg of beef. Enjoy unctuous marrow bones (God’s butter, as Cosentino calls it); melty beef tendon stewed with cannelloni beans and sage; a platter of chicory tardivo tossed with zinfandel vinaigrette; and the piece de resistance, a whole braised beef shank — a nearly 20-pound leg of beef that’s been cooked at 200 degrees for 6 hours until it is spoonable-tender.

I had the chance to enjoy the debut of this meat madness at Incanto, and to sit down with Cosentino afterwards, just days before the 36-year-old chef would have surgery.

He quipped, “It’s for implants. C-cups.”

For Cosentino, who enjoys telemark skiing, and raced competitively in single-speed mountain-bike 24-hour ultra endurance races, this will be his third shoulder surgery — the first one on the left shoulder for this right-handed chef.

His body produces a large amount of elastin, he explains, a natural protein that gives elasticity to tissues and organs. In the case of his shoulder, though, the elastin has caused the connective tissues to become like overstretched rubber bands, and they need to be repaired.

Cosentino expects to be back in the kitchen shortly after the operation. But he won’t be able to move his left arm much for about six weeks.

Q: Maybe you should take up hiking instead?

A: That would be too boring.

A: When I was in my senior year of culinary school at Johnson & Wales University, I had to have knee surgery. I used to skateboard, and the doctors said, ‘No more!’ So I got on a mountain bike then, and got hooked.

Q: How do you find time to do this?

A: I don’t do the endurance races anymore. No time. When I first got to Incanto, I was doing both. But it was too much. After a year, I was done with racing. Q: What made you want to become a chef?

A: My great-grandmother was from Naples. She was always cooking. It’s what I grew up with.

I was never book smart. I was a delinquent. In high school, I was voted “Most likely to go to prison.”

A: Seriously. I also have attention deficit disorder, I had to find an outlet. With ADD, you can’t focus. But in this business, that can be an asset if you can harness it. You focus, like the hands of a clock, going around from task to task.

If you stick me in a cubicle, I’d get fired. But stick me in a kitchen, and I’ll be better than anyone else. It’s because I can multi-task.

Q: Is there anything you won’t eat?

A: Balut. (A Filipino delicacy, it’s a duck egg with a nearly developed embryo inside.) It’s gross. It’s disgusting. The bones, the feathers — don’t get me started. There’s not much I won’t eat, but balut is it. I tried to eat it and just gagged.

Q: Do you get a lot of people who say they won’t go near organ meats, but end up loving them at Incanto?

A: I’ve converted a lot of non-pork-eating Jews and vegetarians. I have some customers who keep Kosher, but when they come here they say they’re in international waters.

If someone does try something they’ve never had before and likes it, I’ve done my job. It makes my day.

Offal is a big hurdle. The love for it comes with time and a mature palate. It’s sad that offal used to be part of everyday life, but it’s not now. We’ve desensitized ourselves to what meat really is. The clientele who never have a problem with our cuisine are Asians and Latins.

Q: Are vegans your worst nightmare?

A: They’re allowed to eat what they want. But when was the last time I went to a vegan or vegetarian restaurant, and they made something special to accommodate me? The street goes two ways.

Q: Were you disappointed you didn’t become the next Iron Chef?

A: Yeah. But it’s all right, because Mikey (Cleveland Chef Michael Symon) got it.

I remember the first time I saw the original “Iron Chef.” I was in a bar in Japantown, drunk out of my mind, with my wife and some friends. We were watching it, and just screaming at the TV. It was like watching a great football game. It was ‘Battle Romaine,’ and we screamed ‘F- – k, what are you going to do with lettuce?!’

Ever since then, I’ve wanted to be on the show. I’m competitive by nature.

Q: Any new projects in the works?

A: (laughs) Any projects? Every day is a project. I’m sure I’ll have to plunge the toilet in a few minutes.

I am working on a cookbook that we’re about to present to publishers. It’ll be the definitive guide to offal.

Q: So as a man with a most adventurous palate, what’s the one junk food you secretly can’t get enough of?

A: Swedish fish. But you have to buy a bag and let the fish sit out in the open to age.

A: When Swedish fish and Gummi Bears first came out, they were firmer. They’ve gotten much softer over the years. So you have to age them now. A week is good enough – if they last that long before being devoured.