For awhile, it looked like the inside of a tiny cubicle was where Tim Luym would make his mark.

After all, the 30-year-old Filipino-American had majored in marketing and programming at Santa Clara University, before going to work at nearby Applied Materials.

But seeing the movie,” Office Space,” the comedy satirizing workers who loathe their three-walled existences, changed all that. Luym saw his life flash before him. He realized it was not a life he wanted. So he decided to turn his back on that, and follow his heart — and stomach — by enrolling at San Francisco’s California Culinary Academy instead.

In 2006, Lyum and a group of investors — none of whom had ever operated a restaurant before — got together to open what was supposed to be a lively night club that merely served a little bit of food. That place was Poleng Lounge, which nowadays has become known far and wide for Luym’s vibrant, daring take on modern Southeast Asian street food in dishes such as bone marrow with crispy coconut bread, and addicting crispy adobo wings.

Recently, I chatted with him about his quirky nickname, the enormous impact a three-star review from the San Francisco Chronicle can have on a fledgling restaurant, and how he’d like to reintroduce Chris Cosentino to a certain Filipino delicacy the Incanto chef once gagged on.

Q: So when Poleng Lounge opened, it was really envisioned to be a club, not necessarily a restaurant?

A: The whole concept was that it was a club. We had to serve food because of the liquor license. We were an Asian-themed bar, so it was only natural that we did Asian bar food. We opened with a menu of only seven items.

Some nights we only had seven people come in. I would go to the market every morning, and figure out how much to buy, based on how many people we thought might walk in. After awhile, we realized there was no way we could sustain ourselves at the pace we were going. We opened in May, and we realized in August that we were probably going to be closed by December. We would run out of cash flow.

Then, out of left field, we got three stars in the Chronicle. I was just the cook. I didn’t know about media and all that stuff. I didn’t grasp what it meant. When the review came out, a public relations agency told us, ‘You better get ready. You’re going to be busy!’

On a weekend, we were used to doing maybe 20 covers. That Sunday night after the review came out, we quadrupled in business. We had all kinds of people come in — young, old, and people who had traveled from all over the Bay Area. It was shocking, and a blessing. To this day, I don’t understand it. I know a lot of talented chefs and can’t figure out, ‘Why us?’

Q: When Poleng Lounge first opened, you weren’t even able to pay yourself a salary. So you ended up cooking on the side for the dental fraternity at the University of California at San Francisco to earn extra cash?

A: That was my income while opening the restaurant. It was a means to an end. About 20 people lived in the house. I did this for a year and a half. I’d do themed nights. When it was “Mediterranean Night,” I’d make couscous with lamb or beef, and Greek salad with feta. When it was “Italian Night,” I’d make Caesar salad, linguine vongole, and tiramisu. Some of them had never had this kind of food before. It was all stuff that I liked to eat.

Once the restaurant got busy, though, I had less time. I started having to repeat menus. The worst was when I did a Macy’s cooking challenge. I was so busy that I called a pizza place to deliver to the fraternity. But I must have given the wrong address, because the pizza never showed up. The next day, they were like, ‘Man, we have to talk!’ And I knew I couldn’t do it any longer.

Q: So, being Asian myself, I must ask you the infamous Asian parental question. Did your parents think you were crazy when, after graduating from an expensive, private university and landing a job in high-tech, you told them you wanted to become a cook instead?

A: (laughs) They were shocked at first. But working on a computer all day was giving me back and neck problems. I used that as a reason for why I shouldn’t do office work.

My Mom loves to cook. My Dad loves to eat. I told them if I spent $40,000 on cooking school, I’d end up saving money because I wouldn’t have to go out to eat; I’d know how to cook everything. They were actually very supportive.

Q: Do you recommend that aspiring chefs go to cooking school?

A: When I graduated from the Culinary Academy, with student loans, and working for minimum wage as a cook, it was tough. When students ask me now, I recommend they work in a restaurant first before committing that investment in school. There’s a big difference between loving to cook, and cooking professionally.

The key is to work with a good team or a good chef. You will learn a lot from them, even more than what you learned at school. School isn’t necessary. But at the same time, it does teach you the theoretical parts, and helps with networking.

Q: OK, so what’s up with the nickname ‘Mosquito’?

A: I used to do college radio when I was at Santa Clara. I did it under the name, ‘Decipher.’ That was my college name because I used to think a lot and try to figure things out. Then, I started doing club and party gigs. I was into scratching. When a mosquito bites you, you scratch. So that’s how ‘Mosquito’ came about.

I had to give up all of that once I started cooking because I worked nights and weekends. I was too tired to do it.

Q: Why do you love to cook?

A: I don’t think I’ve ever had a bad day cooking. There’s always something to learn. It’s fun. It can be peaceful, like you’re in your own world. Food just brings people together. It brings happiness to people.

Q: Whom do you admire most?

A: Besides my Mom and Grandma as cooks, probably the cooks and chefs I’ve worked with. I was really green coming out of school. But they were willing to invest in me. They always pushed me, and believed I could do things. 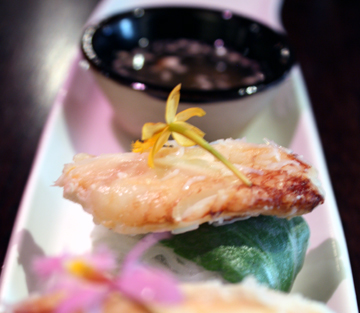 Q: Two years ago, I interviewed you for my story in the San Jose Mercury News about how Filipino cuisine was finally starting to get its due. Do you think the food has become more popular now?

A: It has definitely evolved. A lot of Filipino-style restaurants have opened in the Bay Area. They’re doing a lot of modern Filipino food. People still don’t know it like they know Thai or Chinese food. But now when we serve Filipino dishes at Poleng Lounge, a lot more people are open to trying them.

I was back in the Philippines in January for a month. I think what’s happening here has rubbed off there. Filipinos look to the United States for what’s popular. They see Americans liking Filipino food. There’s almost a little culinary revolution going on there now. More culinary schools have opened up. I think it’s enabled them to see their own food in a different light.

Q: Are any of the dishes you do at Poleng Lounge based on your Mom’s recipes?

A: Quite a few are my Mom’s recipes, but tweaked. My Mom makes this Filipino-style peanut butter oxtail stew. It’s peanut butter, tripe, and oxtail. She used to make it only for special occasions. I took her recipe, but I shred the meat off the oxtail bone, and serve it on the side, with the stew in a bowl. It’s deconstructed style.

My Mom makes her kaldereta with short ribs. Her twist is to braise them in beer. I thought it was ingenious. You end up tasting a little bitterness from the beer. Growing up, everyone always said she made the best kaldereta. At the restaurant, I make it with beer, too. I think she still says hers is better, though. (laughs)

Q: When you’re not at Poleng Lounge, what do you like to eat? Q: After adobo and lumpia, what’s the one Filipino food that you wish everyone would try?

A: Crispy pata. It’s braised, fried pig knuckle. People have liked it at the restaurant. It’s just when you describe what it is, people are like, ‘Oh, no…’

Oxtail stew. When we run it as a special, only the Filipinos eat it. When you think oxtail with shrimp paste and peanut butter, no way is it sell-able to a lot of people.

Palabok, a comfort dish of cornstarch noodles. On top of it is shrimp, and a golden sauce that you make from boiling shrimp shells, shrimp heads, and adding annatto oil. It’s really flavorful. You add some fried pork, rinds, scallions, hard boiled egg, and tofu. It’s one of my favorite Filipino dishes. We serve it at the restaurant, but not as many people order it as I thought would. When Anthony Bourdain did his show on the Philippines, he tried that dish. It wasn’t his favorite. I was surprised.

Q: I once asked Chef Chris Cosentino of Incanto restaurant in San Francisco, what is the one thing he won’t eat. And mind you, this guy specializes in cooking with offal. He said ‘balut,’ which of course is the Filipino specialty that’s a duck egg with a nearly developed embryo inside. Are you shocked?

A: Yes, considering he’s eaten everything else. I think if he had tried eating a less developed one, he would have enjoyed it. I think I could get him to like it. The flavor is there. It’s like a really healthy tasting, concentrated broth. In the Philippines, they are sautéing it with olive oil, and spreading it on toast now.

Q: So what is the one thing YOU won’t eat?

A: The one thing I’ve always feared — but actually ended up eating in January — insects. I can’t stomach the thought of that. But friends told me that if you eat crab or shrimp, it’s like you’re eating an insect of the sea.

I was in Thailand, and a friend tricked me into eating bugs. She made it seem like I was a wuss if I didn’t eat it. So I tried dragonflies. Deep fried. They tasted like chips. It wasn’t bad at all. Then, I tried deep-fried grubs, which are little worms. They spray soy sauce, chili, and vinegar on them. Those aren’t bad, either. The inside is almost hollow after you fry them.

Next, I tried beetles about the size of your thumb. I was really hesitant, but at that point I thought I might as well try them. I took a bite from the tail end first. I started chewing. It was very crunchy. When I got to the part in-between the head and body, something oozed out. It was very alkaline tasting. I wanted to spit it out, but I thought that if I had gotten this far, I might as well just eat this thing. I felt like I had parts of it stuck in my throat for an hour afterwards. I was grossed out. But at least I got over that fear.

Then, in Cambodia, we saw vendors selling fried tarantulas. They’re huge! I really wanted to try one. But I couldn’t get myself to do it. I think I’m done with the whole bug thing now.