Treasures To Be Found Inside the Attic 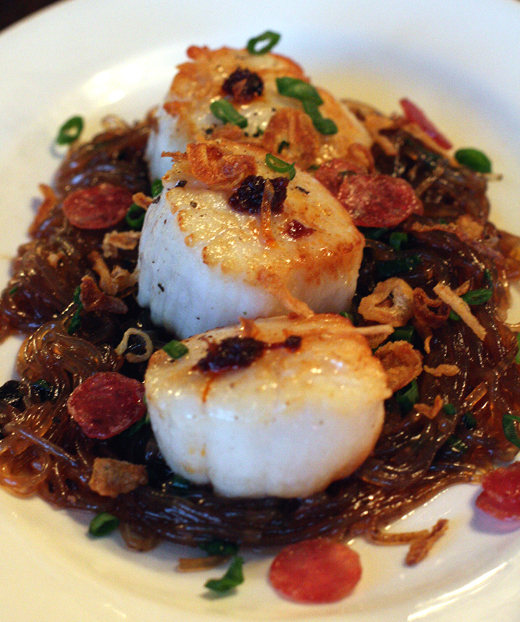 Earlier this year, I, like so many other foodies, mourned the passing of San Francisco’s Poleng Lounge, one of the few restaurants not only to feature modern Filipino food, but to do it exceedingly well.

So, I rejoiced when I heard that the Mosquito had landed — at least temporarily.

For those in the know, that’s the nickname of Filipino-American Chef Tim Luym, formerly of Poleng Lounge, who earned that moniker during college, when he used to deejay at club gigs by scratchin’ vinyl to create distinctive sounds. And nothing scratches more than a mosquito, right?

Luym now can be found in the kitchen at the barely two-month old Attic restaurant in downtown San Mateo, where he is the consulting chef. Whether he sticks around permanently, remains to be seen. Luym would only play coy, saying he was still exploring all his options.

For those who have missed the bold, memorable flavors of Luym’s former Southeast Asian small plates restaurant in San Francisco, you’ll be glad to know the menu at Attic features a lot of the same dishes you fell in love with there.

The vibe also is similar. Walk in the doorway, and you’ll find yourself first in the Bar under Attic — a small, bare-bones speakeasy on the ground floor that stays open late. Walk up a flight of stairs in the corner, and you’ll enter the actual restaurant upstairs, done up in warm reds and browns, and decorated with terracotta tea pots and wood crates. Dark, polished tables are set with caddies of chopsticks. Sliding glass doors overlooking the bustling street below let in a cool breeze on warm summer evenings.

Although my two gal pals and I paid our tab, Luym sent out extra goodies as a welcoming gesture because I’ve had the pleasure of interviewing him multiple times over the past few years.

The best way to enjoy yourself, of course, is to share all the dishes family-style. That’s just what my friends and I did, starting with sweet potato fries ($3.50), which were wonderfully crisp. To dunk them in, there was a spicy, house-made ketchup made with banana. Yes, banana, which lent a wonderful note of fruity, tropical sweetness, so much so that you wonder why more ketchups don’t have banana incorpoated into them. 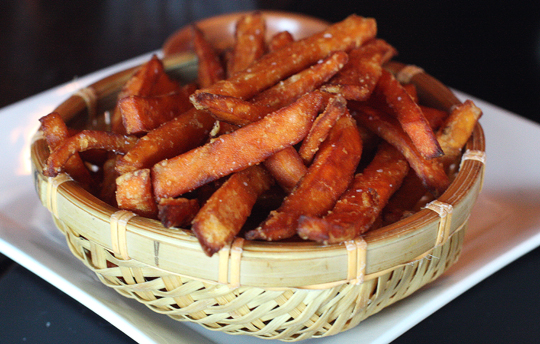 Then came monster-sized house-made Sinigang Chicharonnes ($3.50). They looked like tortilla-sized shrimp chips. But one bite revealed their porky, fatty lushness. 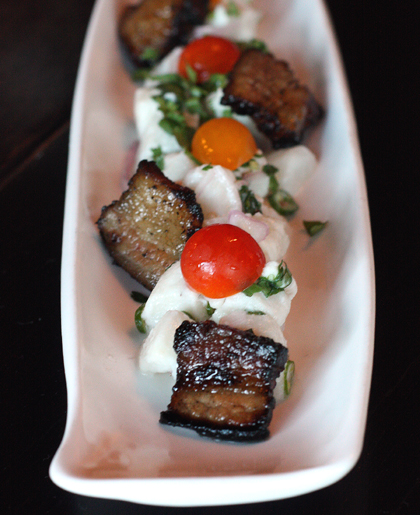 For something a little lighter, there was Inihaw Kinilaw ($9) — cubes of butterfish, done ceviche-style with cooling, sweet coconut milk as a counterpoint to the bite of the shallots and Thai chillies. OK, so maybe it wasn’t quite so “light,” when there were lovely bits of charred pork belly on the dish, too. 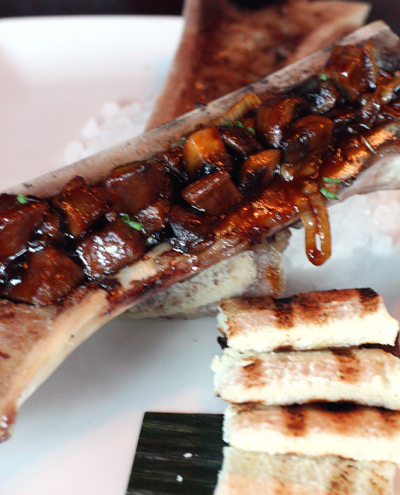 Next, the dramatic “Beef & Bone” ($13), a riff on the bone marrow with coconut bread at Poleng Lounge. Only this also had a stew of mushrooms topping it. You take a toasted bread stick, smear it with the unctuous bone marrow, then some earthy, tender mushrooms. Pop in mouth, and smile — big-time.

Of course, we couldn’t pass up what was always one of my favorite dishes at Poleng Lounge — Adobo Wing Lollipops ($7 for a small order; $12 for a dozen). I’m not normally bonkers about chicken wings. But these fried ones, glazed in a sticky, sweet, tangy sauce are the stuff of dreams. They’re the only chicken wings I order time and time again. 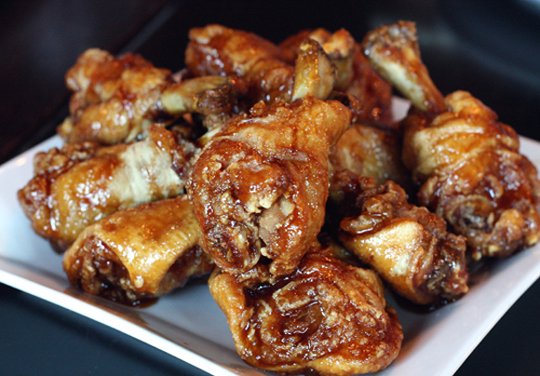 “XO Scallops”  ($9.50) were tender and sweet, a nice contrast to the glass noodles underneath, heady with pungent black bean sauce and bits of Chinese sausage. Beef Salpico ($12.50) is a classic Filipino dish that’s been updated — cubes of filet mignon, cooked in brown butter, green garlic, and Meyer lemon olive oil, then showered with crispy onions. 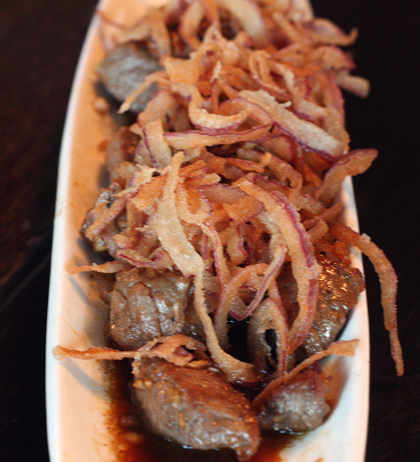 On the side were a simple stir-fry of pea tendrils, garlic and snow peas ($7), and Crab Butter Fried Rice ($5.50) that arrived capped decoratively with a whole crab shell. Underneath, grains of rice were mixed with a lot of crab meat and tomale, making for a rich accompaniment. 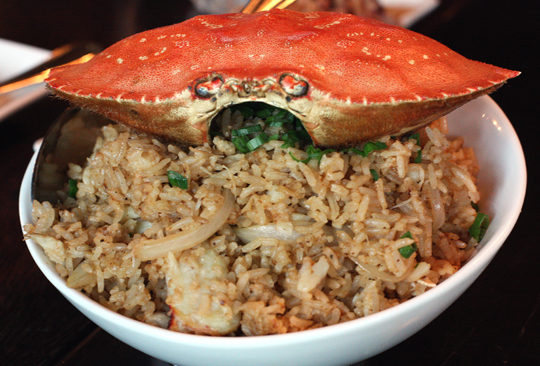 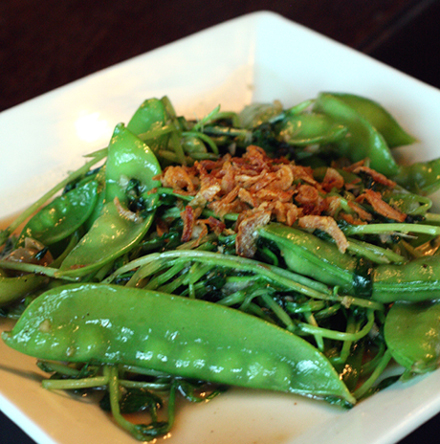 The only dessert that night was chilled tapioca made with ube, a purple yam. Although my gal pals and I aren’t always the biggest fan of starchy, soupy Asian desserts, we were all surprised how much we liked this one. Cool, creamy and sweet, it was a fitting ending to a meal full of satisfying in-your-face flavors. The newbie restaurant still has a few rough edges. Service is friendly and attentive — but maybe too attentive, as my cocktail and ice tea glasses were whisked away before I’d even finished them.

But there is quirky charm, too. When my friends and I exited the restaurant into the bar downstairs late that night, we found a lively group of Generation Xers celebrating a birthday, who promptly offered us slices of a delightful homemade, layered carrot cake to join in the fun.

At the Attic, you never know what treasures you’ll find. Let’s just hope its real jewel, Luym sticks around — at least for a little while longer. 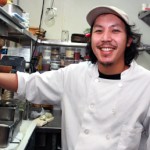