A Secret Garden At Quattro in the Four Seasons Silicon Valley 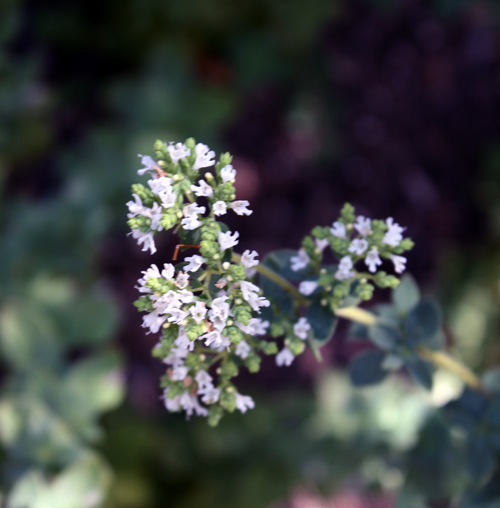 It may not exactly possess storybook charm. Indeed, you might walk or drive past it without even knowing it’s there.

The Herb Garden at Quattro, as it has been so dubbed, serves an important purpose: It provides culinary inspiration for the chefs at the hotel’s Quattro restaurant, with its fresh, aromatic bounty just steps outside their door. It saves money, too. The garden now yields enough mint for the restaurant and bar that none ever has to be purchased. And when Executive Chef Alessandro Cartumini needs a few Kaffir lime leaves to roast fish, he just goes outside to pick some, rather than being forced to order a larger quantity than necessary from a supplier.

Cartumini planted the garden a year ago just around the corner from the restaurant, in a 100-square-foot, concrete-walled berm that’s part of the hotel’s landscaping. Like an Italian Johnny Appleseed, he’d like to sprinkle a few more seeds here and there on the hotel grounds, but he laughs that the landscaping crew might not go for that. 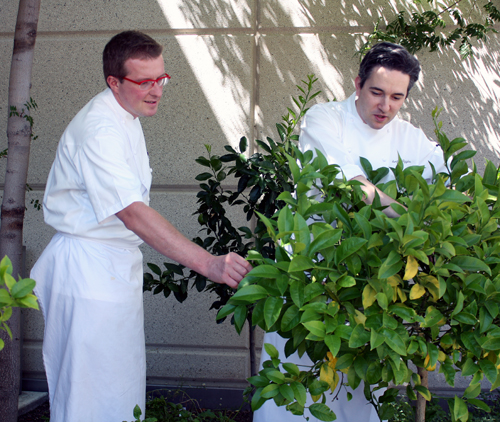 The fresh herbs are used in many dishes, most noticeably in the chef’s special tasting menu, where every course gets a flourish of them.

“It really gets cooks more in touch and makes them have more respect for the food,” Cartumini says of the on-site garden.

Adds sous chef Edward Higgins, “You can cut what you need five minutes before. It really preserves the flavor that way.”

If you haven’t visited the contemporary Italian restaurant since it opened three and a half years ago, many changes have occurred. The food, once a bit rustic, is decidedly more refined now, positioning the restaurant as more a destination dining spot, Cartumini explains. The restaurant also has a new-found emphasis on local and house-made. It shows in the creamy ricotta that’s made daily to serve in place of butter with the freshly baked focaccia brought to the table.  All the pastas are made in-house now, too, with the Ferrari of pasta machines, which set the restaurant back a cool $13,000. 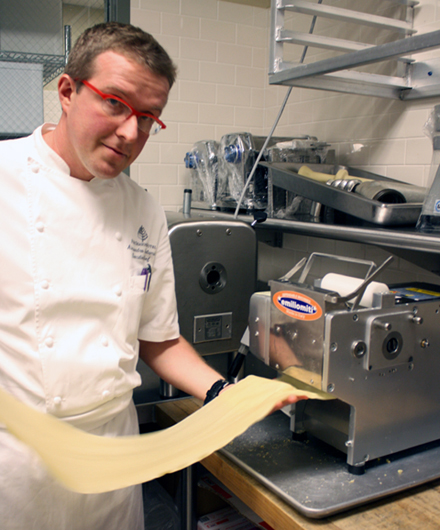 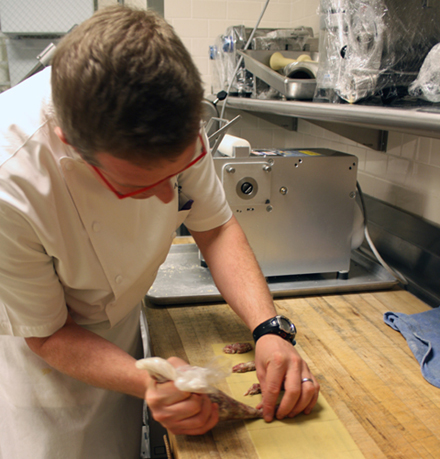 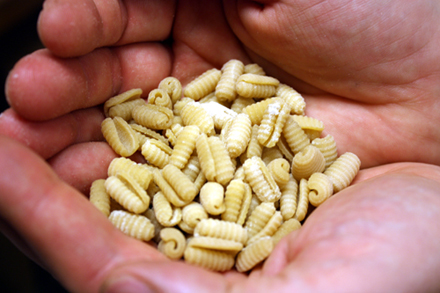 When I asked Piemonte-native, Cartumini, why the pasta machine, with its 1.5-horsepower engine, is so pricey, he deadpanned:

The restaurant also offers a popular “crudo” special on Thursdays, starting at 4 p.m. Enjoy Italian-style raw fish preparations at the bar for $4 per plate. And if you’re so inclined to cycle to the restaurant for Sunday brunch, the hotel will valet park your bike for free. 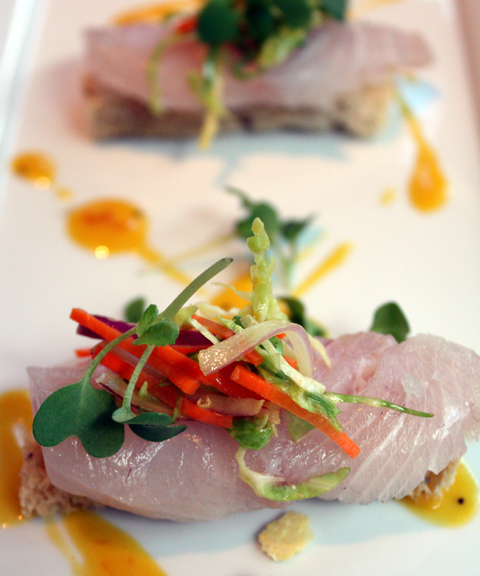 Recently, the chefs invited me in to try some of the new dishes on the menu. “Hamachi Affumicato” was a playful take on traditional sushi. A length of smoked yellowtail was draped over a thin rye crostini that stood in for the usual sushi rice.  It looked like sushi, but when you bit into it, you got the surprise of the crisp, toasted bread. A sharp mustard vinaigrette tied it all together. 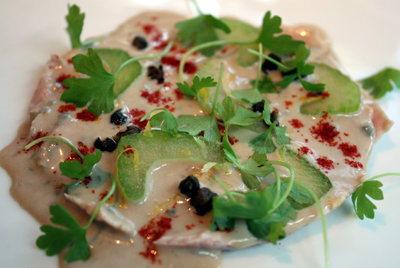 “Vitello Tonnato” was a modern interpretation on the classic cold veal dish topped with creamy tuna sauce that hit the spot on a warm evening. Next, my favorite dish, and one my husband never though he would like, but boy, did he. After all, who would have ever thought that casonsei (rectangular ravioli stuffed with veal sausage) would go with fresh Bing cherries? 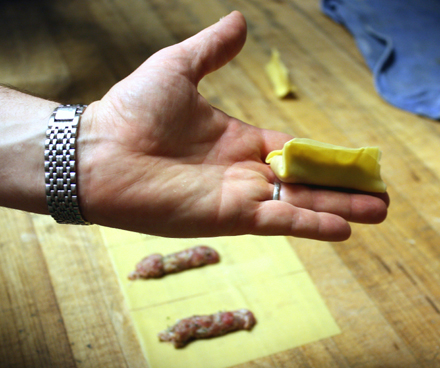 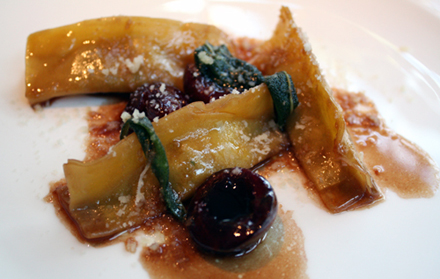 But they do in a most magical way, when finished with a touch of balsamic, fresh sage, and Parmigiano. The tender, savory, seasoned pasta pillows and the juicy, bright, sweet cherries are a marvel together. That was followed by smoked bucatini, buckwheat pasta with a lovely nuttiness that went beautifully with the small disks of potatoes. The hickory-smoked bacon lent even more meaty, umami flavor to the dish. Crispy-skinned rouget (otherwise known as red mullet) came floating in a Parmesan broth and adorned with garlicky brioche crumbs in a subtle nod to a Caesar salad. 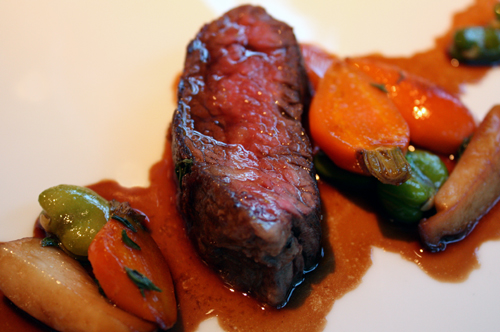 That was followed by “Beef Calotte,” a tender slab alongside heirloom carrots, trumpet royale mushrooms, and thyme from the Quattro garden. 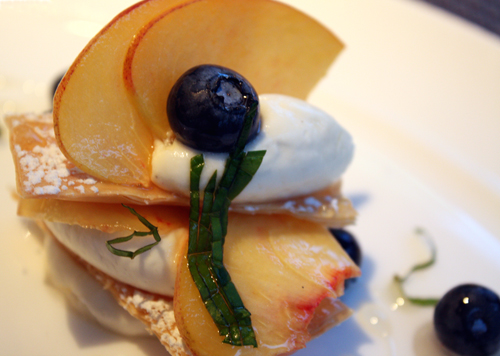 Lastly, fresh peaches and blueberries topped a Napoleon-like pastry dolloped with mascarpone cream, and mint from — where else — the garden, of course.

Freshness — in so many ways — is in the air at Quattro.