A Sunny Shade of Pasta Whenever someone asks me what my favorite cookbooks are, they’re invariably taken aback when I answer.

Among my most adored cookbooks are the ones by Jean-Georges Vongerichten.

Yes, the chic four-star, classically trained Alsatian chef with a fondness for cooking in Prada loafers, who boasts a mega empire of restaurants around the world, including the swank Jean Georges in New York.

I know you’re thinking precious dishes that take four pages to explain, days to complete, special equipment, and untold trips to many markets for esoteric ingredients.

But his recipes aren’t that at all.

Indeed, I’ve probably cooked more than a dozen recipes from his “Jean-Georges Cooking at Home with a Four-Star Chef” (Broadway) and his “Simple to Spectacular” (Broadway) books, and been won over by all of them. Surprisingly, from a chef of this caliber, the recipes are not overly complex. In fact, many of them are downright simple and thoroughly straightforward. Often, there also are inspiring flavor taste combinations, too, from this man who was nicknamed “the palate” at a young age for his uncanny ability to discern flavors.

His “Pasta with Saffron Oil” is emblematic of all of that. The recipe from “Simple to Spectacular” is indeed simple and spectacular.

It’s literally just pasta tossed with olive oil that’s been infused with saffron. But how beautifully they go together. The saffron turns the noodles a sunny shade of warm, orange-tinged gold, and lends a distinctive earthy, exotic flair.

I first served this pasta as a side dish, adding slices of piquillo peppers to give it a little more heft. The next time I made it, I not only added the piquillo peppers, but also some Spanish Italian tuna packed in oil to make the dish substantial enough for a main course.

It’s definitely pricey. I was afraid to even touch the $101 large jar sitting on the shelf, so I opted for the more affordable $14 jar (8.11 ounces). 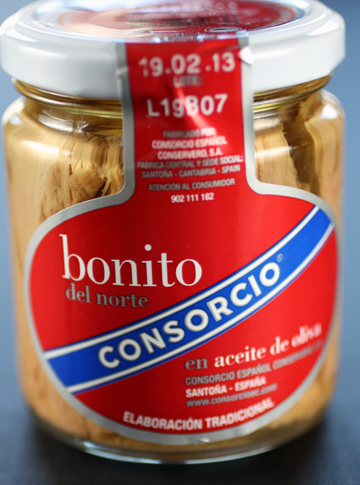 The tuna is very meaty and very, well, tuna-y tasting. There’s a deep flavor here that you don’t readily find in your average supermarket brand. I’m not sure I’d pay $14 for it regularly. But it was a treat to try at least once.

A quarter teaspoon of saffron threads is combined with a tiny amount of hot water to soften them. Olive oil is added next, and heated just until it bubbles.

Cook your linguini or spaghetti, drain, then stir in the saffron oil. Add piquillo peppers and tuna, if you like. Garnish with chopped parsley.

That’s a Jean-Georges Vongerichten recipe with my two humble additions.

One luscious forkful will have you singing the praises of Vongerichten’s cookbooks, too.

1 pound linguini or other pasta

Combine saffron with 1 tablespoon hot water in a small saucepan and let sit for 5 minutes. Meanwhile, bring a large pot of water to a boil and salt it.

Add olive oil to the saffron-water mixture and warm over very low heat; when the mixture begins to bubble, turn off heat. (At this point, you can let the mixture sit for 2 to 3 hours, or even overnight, rewarm before serving. The oil does seem to get a more vibrant hue the longer you allow it to infuse, too.)

Cook pasta until tender but not mushy. Drain, reserving about 1/2 cup of the cooking water. Toss drained pasta with the saffron olive oil, and salt and pepper to taste. Stir in piquillo peppers and tuna. If pasta seems too dry, add a little of the reserved pasta water, and stir. Garnish pasta with parsley, and serve.

Adapted from a recipe from “Simple to Spectacular”