Canned tuna doesn’t normally elicit a whole lot of excitement. Mostly, you grab it mindlessly out of the cupboard because it’s convenient for making a quick salad, sandwich or casserole that you’ve made a hundred times before.

But imagine a canned tuna that actually makes you sit up and take notice not only because it has really deep seafood flavor, but also because it is low in mercury and is caught in a sustainable way.

That’s what Raincoast Trading canned tuna is all about. 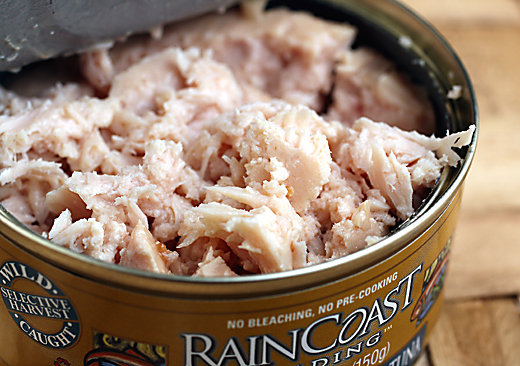 The Vancouver, Canada company is run by a fourth-generation fishing family that catches wild-caught tuna and salmon in the Pacific Northwest. Each batch of tuna is tested for mercury, a heavy metal present in almost all seafood that can be harmful in large doses for pregnant women, nursing mothers and young children. The amount of mercury in Raincoast Trading’s tuna registers well below the allowable levels in the United States and Canada, according to a company spokesperson.

Albacore tuna are caught by “hook and line” at a specific size to ensure that they are lower in mercury as the larger and older a fish gets, the more likely it will have higher levels of the toxic metal. Salmon are caught with portable fishing traps that apparently lessen the problem of catching other, unwanted fish at the same time.

Recently, I had a chance to try samples of the canned albacore tuna and sockeye salmon.

The first thing you notice when you open the can is that there’s very little liquid to drain out. Unlike most other canned seafood, no extra water or oil is added to these products. They are packed only in their own oils. The tuna and salmon also are “single-cooked” as opposed to the double-cooking that other canned seafood undergoes to make the skin easier to remove, but which can dampen the flavor and texture of the flesh.

Take a taste and you actually taste tuna as opposed to salt. A 1/3 cup serving has 25 mg sodium, compared to the 250 mg sodium per 1/4 cup serving of another popular brand of tuna I had in my cupboard at home. You can really taste the difference, too. There’s real flavor to the tuna, which is also nicely meaty in texture.

Raincoast Trading’s canned skinless, boneless Sockeye salmon has succulent flesh with a very rich salmon flavor. It would be dynamite in chowder.

You can find Raincoast Trading’s products at Whole Foods markets for $2.99 to $5.99, depending upon the type of seafood. 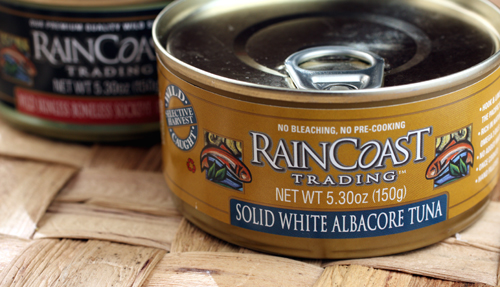 The canned salmon made for the star of a simple green salad that I dressed with a lemon vinaigrette with capers. As for the tuna, I decided to marry it with pasta in this fabulous dish from the January/February 2011 issue of Cook’s Illustrated magazine.

“Spaghetti with Lemon and Olive Oil” is actually a meatless dish. But lemon and seafood go so splendidly together that I figured it would work in this dish.

This pasta couldn’t be easier or faster to make. After cooking the noodles and draining them, you can make the sauce in mere minutes in the same pot. It’s just sauteed shallots mixed with some of the pasta cooking water, a little heavy cream, a splash of olive oil, lemon zest, lemon juice and grated Parmesan cheese. Then, I flaked in the tuna.

The result is a creamy, silky sauce — just enough to cling to the spaghetti strands, but not so much as to pool at the bottom of the bowl. The flavor is citrusy from the lemons and fruity from the olive oil, but not overpoweringly tart at all.

The tuna makes the dish more substantial, but also lessens the punch of the lemon a tad. So if you prefer more full-on lemon flavor, just make the recipe without it, as it appeared in the magazine originally.

Spaghetti with Lemon and Olive Oil

Note: Let the dish rest briefly before serving to the flavors develop and the sauce thickens

Cover and let pasta stand 2 minutes, tossing frequently and adjusting consistency with remaining 1/4 cup reserved pasta water if necessary. Stir in basil and season with salt and pepper to taste. Serve, drizzling individual portions with oil and sprinkling with cheese.

Adapted from a recipe published in Cook’s Illustrated magazine, January/February 2011 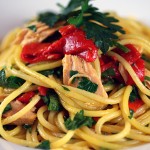 And: Pasta with Saffron Oil and Tuna