Giving Thanks for a Non-Pie Pumpkin Dessert on Thanksgiving 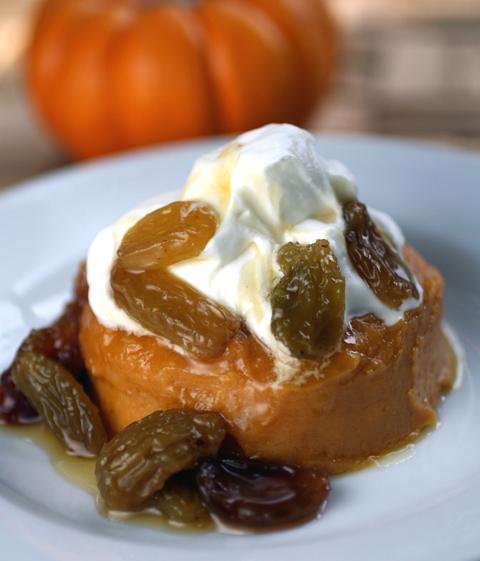 I love all things pumpkin — except pie.

Forgive me my idiosyncrasy with this hallowed squash.

Many of you already know I won’t ever turn down pumpkin bread, pumpkin cheesecake, pumpkin muffins or any savory pumpkin dish. But if pumpkin pie comes to the table, I’d just as soon pass. I think I find it just too dense and one-dimensional.

Yet, I still enjoy the autumn taste of pumpkin and I know it rightfully deserves a place on the festive Thanksgiving table.

That’s why I’m always elated when I find a lovely pumpkin dessert recipe that is not pie.

The recipe is from one of my favorite cookbooks, “Dolce Italiano” (W.W. Norton & Co.) by Gina DePalma, pastry chef of Babbo restaurant in New York.

The golden raisin compote gets its sweet, grown-up taste from orange juice, sugar, butter and rum.

The custards bake in a water bath, then are chilled before serving.

The original recipe calls for chilling the custards for at least four hours, before inverting them onto individual plates. Try as I might after that allotted time, though, I couldn’t get my custards to release from the ramekins. 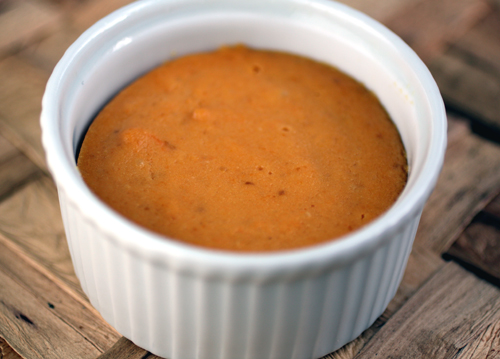 I conferred with DePalma via email, who noted that at the restaurant, they actually chill the custards overnight. She thought that might make them firmer and easier to remove from the ramekins.

So I waited overnight, and tried again. And what do you know — it worked this time. The custards were indeed firmer. I ran the tip of a knife around the edge of each custard, then let the ramekins sit in a bowl of very hot water for a few seconds, as DePalma also had suggested. Then I placed a small plate over a ramekin, turned it over, and gave it one big shake, which helped release the custard onto the plate. Voila!

I’ve adapted the directions in the recipe below to reflect all of this. So plan accordingly to make these the day before you serve them. If you still have problems unmolding your custards, don’t fret. They taste just as wonderful served in the ramekins.

And they’re sure to satisfy and unite both pumpkin pie-lovers and loathers.

1/4 cup granulated sugar, plus more for dusting the ramekins

Preheat oven to 325 degrees and position a rack in the center.  Grease six 4-ounce ramekins or custard cups with nonstick cooking spray, then coat bottoms and sides with some granulated sugar, shaking out excess. Have ready a flat-bottomed roasting pan large enough to accommodate the ramekins with 3/4 inch of space in between them.

Place granulated sugar and crystallized ginger in bowl of a food processor and process until ginger is finely ground. Pour mixture into the bowl of an electric mixer fitted with the paddle attachment and add cream cheese and light brown sugar. Cream ingredients together on medium speed until smooth and lump-free, about 2 minutes. Beat in mascarpone, followed by egg yolks, one at a time, scraping down sides of the bowl after each addition. Beat in vanilla extract and salt, then beat in pumpkin puree just until combined.

Carefully place pan in the oven and bake custards for 25 minutes, then rotate the pan to ensure even baking. Bake them for another 15 minutes, removing the foil for the last 5 minutes of baking. Check for doneness; the custards should appear slightly puffy and their surfaces should be matte. Remove pan from oven and allow custards to cool for 10 minutes, then remove them from the bain-marie and chill overnight.

To serve, run tip of a knife around the edge of each custard. Dip bottoms of ramekins into a bowl of very hot water for a few seconds. Place a dessert plate over the top of the ramekin, invert, giving it one good shake to help release the custard. Remove ramekin. Repeat with rest of custards. Top each serving with a dollop of whipped cream or creme fraiche and a spoonful of golden raisin compote.

Place raisins, orange juice, rum and sugar in a small saucepan over medium heat. Simmer until raisins are soft and plump, then pour liquid through a chinois or fine-meshed sieve to strain out the raisins and place them in a small bowl. Return liquid to the pan and continue simmering until it is syrupy and reduced to about 1/2 cup. Remove pan from heat and whisk in the butter. Combine sauce with raisins and let cool to room temperature. 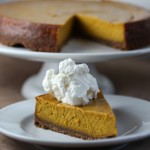 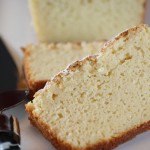