Getting Ready for Pigs & Pinot with Chef Charlie Palmer OK, how cute is this little oinkster?

If you’re at all squeamish about seeing animals being raised ultimately for the dinner table, you might want to stop reading now. But if you’re like me, and believe it’s important to know that our proteins actually were once whole, living, breathing animals before they ended up shrink-wrapped in select cuts in the supermarket, then I hope you’ll appreciate knowing a little more about the artisan ingredients going into this year’s fifth annual ”Pigs & Pinot” extravaganza at the Hotel Healdsburg in Healdsburg.

Chef Charlie Palmer of Dry Creek Kitchen in the Hotel Healdsburg and his staff once again are overseeing the epicurean event, March 19-20. Proceeds will benefit Share Our Strength and local Healdsburg educational organizations.

If you’re thinking about joining the festivities, you’re late to the game, unfortunately. For the first time ever, the event sold out within the first half hour that tickets went on sale. But that’s what happens when you have the hoopla of  Bravo TV’s “Top Chef” added to the mix. Although the event usually attracts mostly locals, organizers were pleasantly surprised this time to see folks from the East Coast, Atlanta, and Seattle eager to buy tickets.

Besides great Pinot Noir producers from California and around the world, Palmer will be joined by “Top Chef” finalists, fan-favorite Kevin Gillespie (of Woodfire Grill in Atlanta); and Bryan Voltaggio (of Volt restaurant in Frederick, Md.), who narrowly lost the title to his younger brother Michael Voltaggio (of the Dining Room at the Langham in Pasadena). Gillespie will be creating a cold appetizer for the ”Pigs & Pinot” gala dinner, and Bryan Voltaggio will ply his skills with seafood for another course.

Food Network star Tyler Florence and Roland Passot of La Folie in San Francisco will round out the mix in the star-studded kitchen. 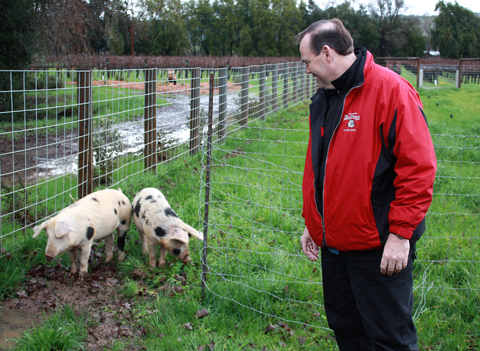 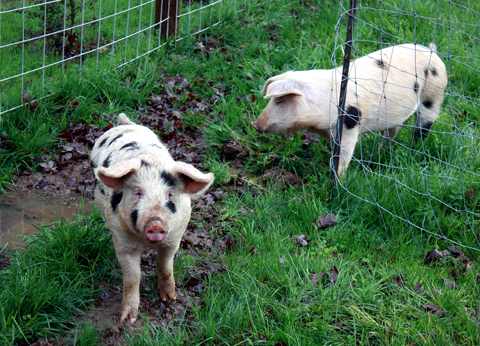 I had a chance to learn more about the preparations when I was invited up to Healdsburg last week with a couple of other food writers. On a rainy morning, we loaded into the back of Palmer’s truck to visit the two heritage Gloucestershire pigs he was raising for the event. It’s the first time he’s raised his own pigs for the event. Others used for the event will come from a farm in Missouri.

“Chefs are always talking about wanting to get back to the earth. You can’t get any closer than this,” he says. The two pigs are fed vegetable table-scraps from the restaurant, and will switch to an all-acorn diet for the last three weeks before their slaughter. 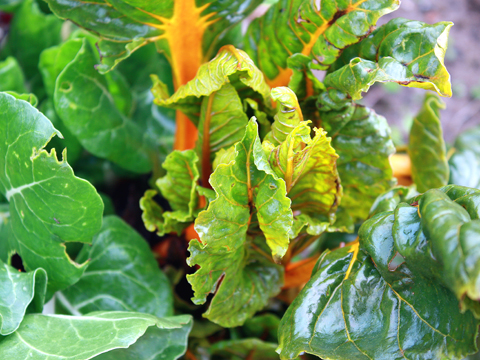 The two pigs, which Palmer purposely didn’t name, will grow to about 170 pounds each. They are being raised at the biodynamic-certified Quivira Vineyards and Winery in Healdsburg, which also grows specialty produce — everything from arugula to Swiss chard to apples to raspberries — for Dry Creek Kitchen and seven other restaurants in the area. Fifty-eight hens on the property lay three dozen eggs a day, which also are sold to restaurants. Proceeds from the sale of the eggs and produce benefit the Northern Sonoma County Healthcare Foundation, a non-profit that works to expand health care availability in the region. 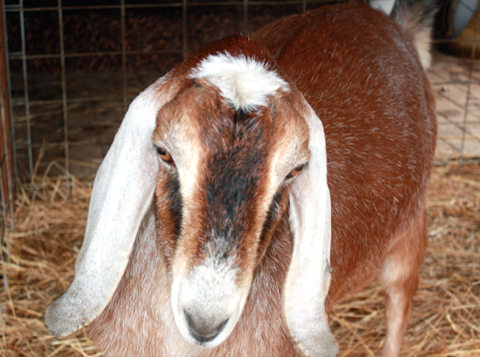 As we trudged through the mud to take a closer look, Dry Creek Kitchen Chef de Cuisine Dustin Valette’s enthusiasm was contagious. He took a bite of some crisp arugula leaves that had just been picked hours ago and broke into a grin. “This is what gets us excited,” he says. “You taste the depth of flavor, the pepperiness. You don’t get that from supermarket greens.” 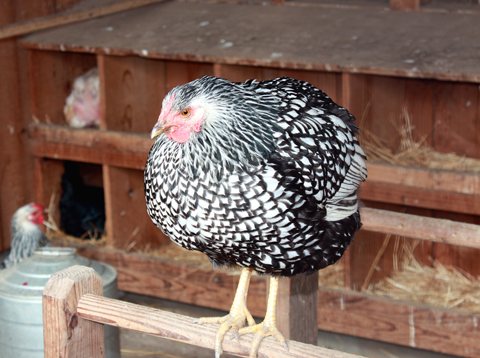 Palmer is especially looking forward to this year’s “Pigs & Pinot” because it will reunite him with one of his proteges, Bryan Voltaggio. Bryan’s brother Michael also worked for Palmer at Dry Creek Kitchen.

Palmer was a judge on this past season’s “Top Chef,” and will reprise that role next season. “Tom (Colicchio) and I are good friends. Chefs are so busy, though. It’s nice to get a chance to spend time with him.”

But until he appeared on the show, Palmer had not even watched it. Fortunately, he got the “Cliff Notes” version from his four sons, who are avid fans.

“It was a Sunday morning, the day before I was supposed to fly to Vegas to tape the show,” Palmer says. “My boys shook their heads and said, ‘Dad, you don’t even know what’s going on!’ So they made me sit down with them to watch two episodes. I don’t even know what season they were from.”

And what did he think of his first experience on the show?

“It wasn’t too bad,” he says with a laugh. “But it took forever to film the judges table. If I had to hear Padma say, ‘You can pack your knives and go,’ one more time, I was going to pack my bags and go!” As we headed back from the winery to Dry Creek Kitchen, Palmer gave us a preview of the type of lusty cooking that will be featured at “Pigs & Pinot” by preparing a fabulous lunch featuring heritage Duroc pork and seasonal vegetables from Quivira. 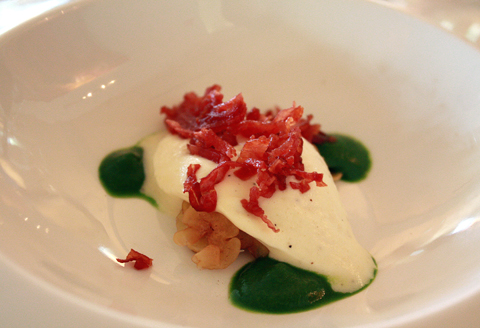 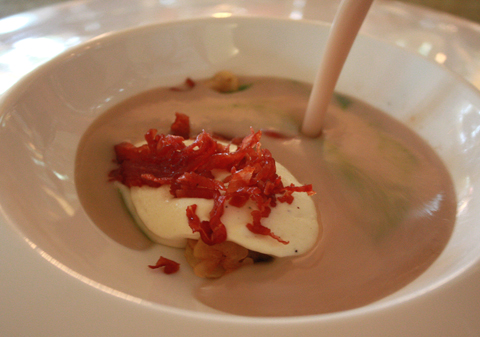 That was followed by a roasted chestnut soup poured tableside over crispy bits of prosciutto. Arugula pesto gave the warming, velvety soup a hit of freshness and spiced rum sabayon made it all the more luxurious tasting.

The main course was a duo of heritage pork. Slices of tender, juicy roasted loin stood at attention with a golden, crispy square that looked for all the world like a potato croquette. But in fact it was pork belly, which had been cooked sous vide, then seared in a hot pan to crisp up the skin. Tapping my fork on top of it made for a lovely rat-a-tat sound. That’s how incredible the skin was. Slicing into that shattering skin revealed a bountiful layer of rich fat that gave way to meat with an almost creamy texture. 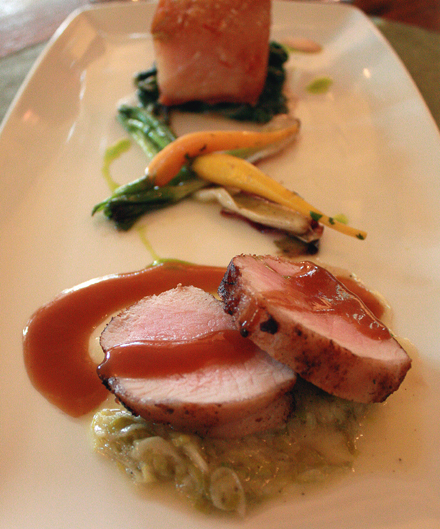 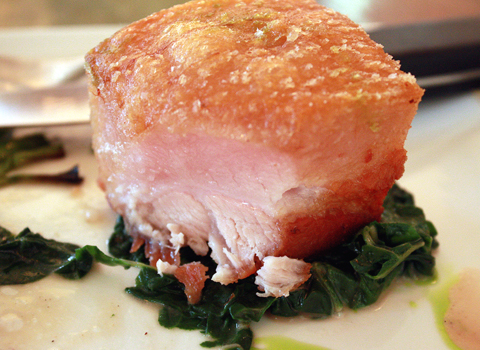 Dessert was a show-stopping Gravenstein apple strudel that was presented whole at the table, then portioned into servings. Instead of taking the easy route by using phyllo, Pastry Chef Yulanda Santos made her own layered pastry that baked up golden and crisp.  Pecan caramel sauce was drizzled over the top. A dollop of butterscotch pudding, made from the eggs laid by the chickens at Quivira, was a genius touch that accentuated the buttery, caramel flavors of the dessert. 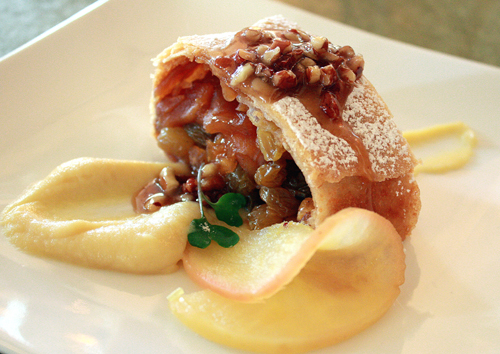 For those who won’t be able to attend “Pigs & Pinot,” there’s still an opportunity to enjoy some of the fun another way. From Feb. 1 through April 30, the hotel is offering a package deal that includes two nights stay, a Pinot Noir tutorial with Dry Creek Kitchen Sommelier Drew Munro, VIP tastings of last year’s winning Pinots, and a three-course dinner with a “Pigs & Pinot” entree paired with a premium Pinot.

Price for the package is $776 (Sunday through Thursday), and $996 (Friday and Saturday). Visa Signature card members get 15 percent off when they use their card. For reservations, call (800) 889-7188 or email frontoffice@hotelhealdsburg.com. 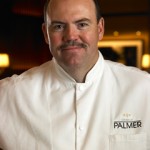