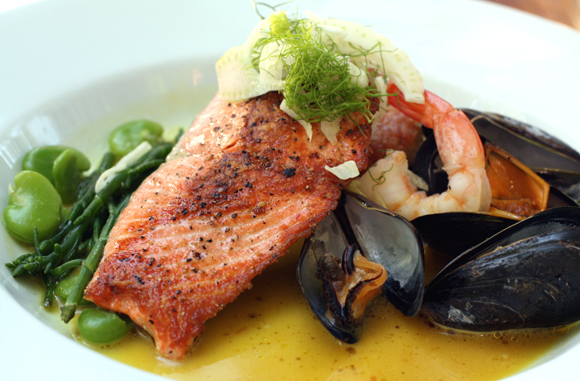 If the bumper-to-bumper traffic on Highway 29 and the shoulder-to-shoulder squeeze in tasting rooms have left you anything but relaxed in the Napa Valley, there’s an antidote to that.

Picture the Napa Valley before big-time tourism development took hold. Or even Lake Tahoe back in the day with its natural, picturesque scenery dotted with cabins rather than sprawling, gazillion-dollar resorts. That’s what this region of Sonoma County is like, from what I saw on my first visit there recently. It’s a little like stepping back into time, when wine-tasting still had a small-town feel to it all. 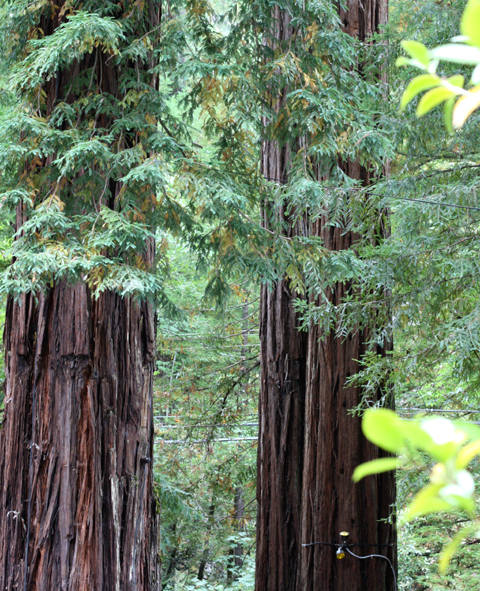 I was invited to be a guest of Russian River Vineyards in Forestville, to come taste wines and stay for dinner at the restaurant, Corks. It’s the only restaurant at a winery in the Russian River Valley. So, it’s easy to see why it’s become a popular locale for weddings.

The drive there is breathtaking, as the Gravenstein Highway (116), winds through soaring redwood groves, whose lush canopies provide plenty of shade so that this part of Sonoma County remains fairly comfortable even on days when the rest of the region is sweltering. 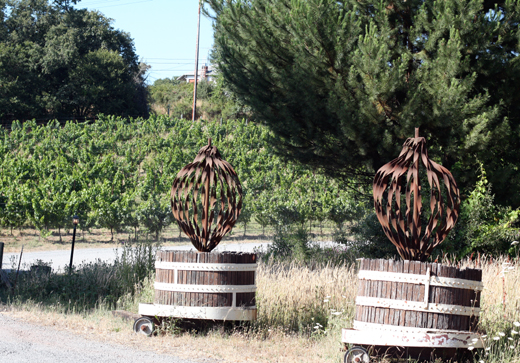 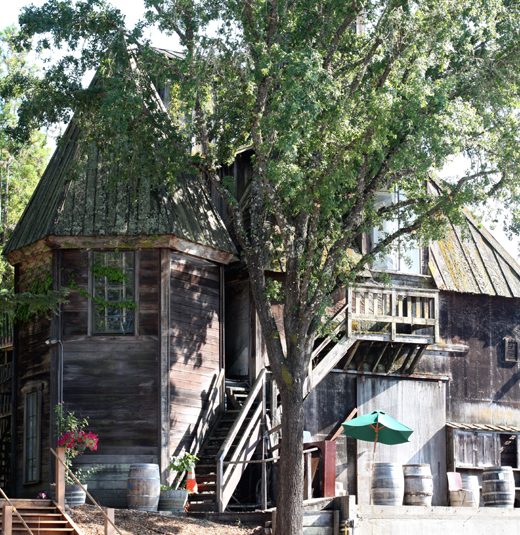 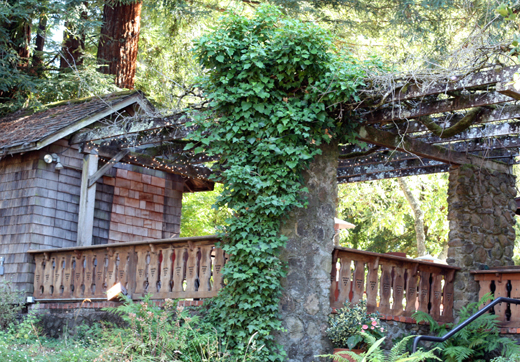 If you’re used to the often ostentatious, faux Mediterranean wineries of the Napa Valley, you’re sure to’ find Russian River Vineyards a nice change of pace. The property is an 1890’s historic farmhouse. Its exposed wooden timbers lend an authentic sense of place. The Merlot vineyard at the entrance is among the first such vines of that varietal ever planted in Sonoma County, dating back to 1963.

Over the years, the property has changed hands a few times. Three years ago, real estate developer Chris O’Neill, and his wife Barbara Sattler, took it over. Today, the winery produces about 2,000 cases total of 11 different varietals. Production is done at a custom-crush facility in Sebastopol. But plans are in the works to build a green production facility on the grounds in the near future. 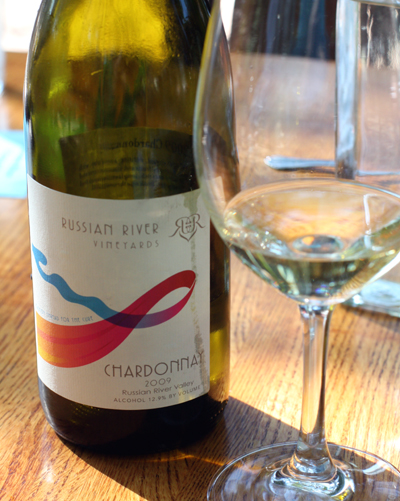 The winery is known in particular for its Pinot Noirs, with their fruit-forward dark cherry and blackberry aromas and earthy backbone. The winery also makes Charbono, an Old World Italian varietal that’s rarely grown in the United States; and a golden Botrytis Chardonnay that tastes of honeysuckle and is a little lighter in body than other dessert wines. The tasting room is open daily. There’s a $5 charge to taste, but the fee is waived with any wine purchase. Additionally, on Thursdays in the restaurant, corkage is waived if you want to bring your own bottle from elsewhere.

The rustic property boasts an organic garden and chickens. It also raises pigs occasionally, which are fed scraps from the restaurant until the animals are large enough to be featured on the menu, themselves.

Executive Chef Todd Davies has been overseeing the restaurant for the past year, which is open daily for brunch and dinner. The Idaho-native is a graduate of the Culinary Institute of America at Hyde Park and has worked under such acclaimed chefs as Charlie Palmer and David Burke. He’s also the former executive chef of San Francisco’s now-shuttered mc².

Enjoy a meal at a white-tablecloth-draped table inside the comfortable dining room or on the brick patio under the shade of a big umbrella like my husband and I did.

The menu showcases California cuisine with local ingredients. This is not a place to come if you want cutting-edge molecular gastronomy cooking or precious tasting menus. The food is hearty here, with good-sized portions of familiar fare such as Caesar salad ($10), crispy eggplant napoleon ($11), and Angus New York steak with sauteed spinach ($29). An amuse arrived in Chinese soup spoons, holding a zesty bite of tomatoes, mozzarella and olives.

My first course was white corn soup ($10) with a swirl of creme fraiche and a garnish of prawns. The soup was creamy, but with a slightly coarse texture, and was sweet with summer corn flavor. 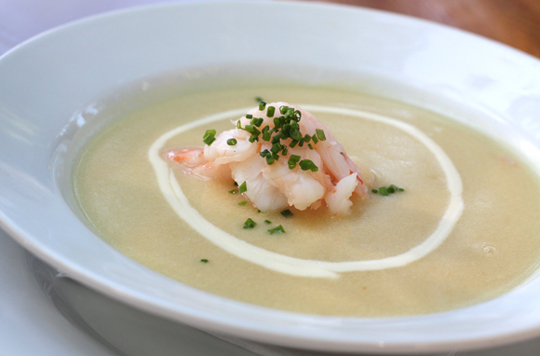 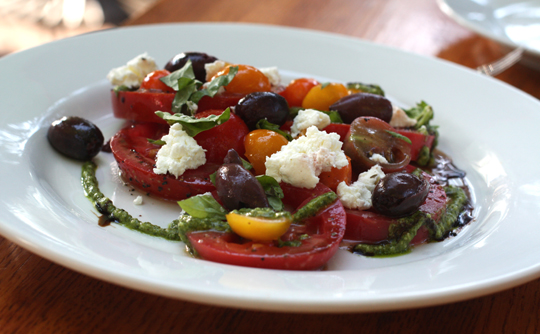 My husband’s heirloom tomato salad with goat cheese ($11) was simple and satisfying.

His roasted pork loin ($24) was from one of the pigs raised on the property. Cooked conventionally, rather than in today’s almost de rigueur sous-vide method, the meat had some chew to it. It lay on a lovely bed of creamy cannellini bean and corn ragout. 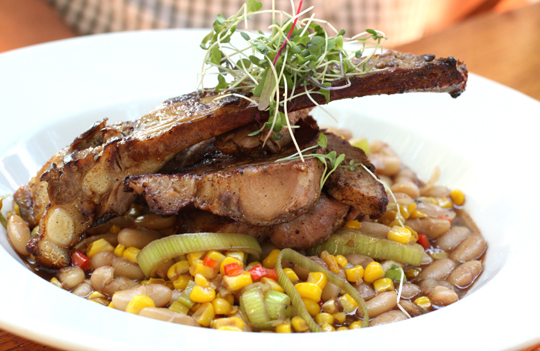 The seared Taku River Sockeye salmon ($27) is one of the chef’s signature dishes. The rich flesh had been cooked maybe a minute over, so that it lacked the wonderful medium-rare center it so deserves. Alongside were plump mussels, prawns, favas and a crisp risotto cake.

Dessert brought an outstanding rendition of strawberry shortcake with textbook-perfect biscuits that were sturdy but crumbly and tender. 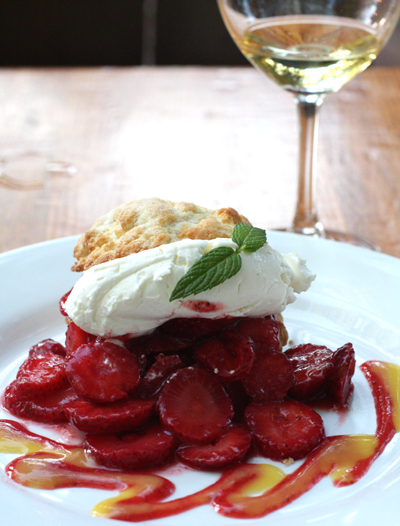 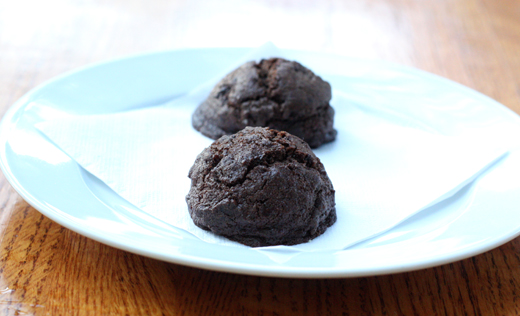 A half-hour’s drive awaited us as we headed to the Elim Grove Cottages in Cazadero, where we had been invited to stay the night by owners, Mark and Elizabeth Weiss. Nine years ago, he gave up his hectic life working in tech in Silicon Valley to run this establishment with his wife, a school teacher. 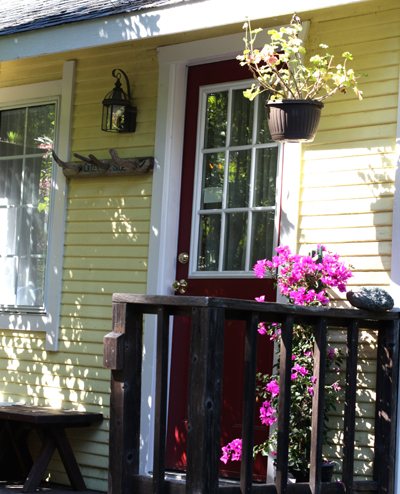 You feel a little like you’re winding your way through the woods to grandma’s house amid these small, storybook-like cottages that are surrounded by redwoods.

Mark will greet you with a freshly-baked baguette from Raymond’s Bakery on the premises. Yes, a bakery just steps from your cottage. The baked goods may not be quite as refined as what you’d find in the big city, but they make for a fine way to wake up in the morning with a good strong cup of coffee. 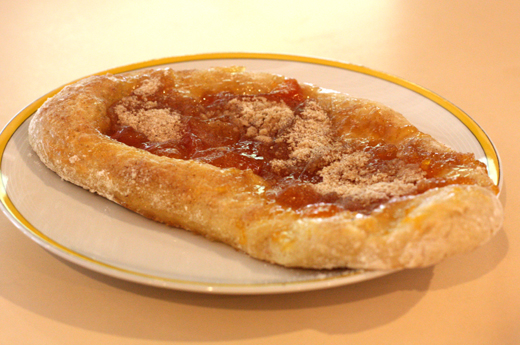 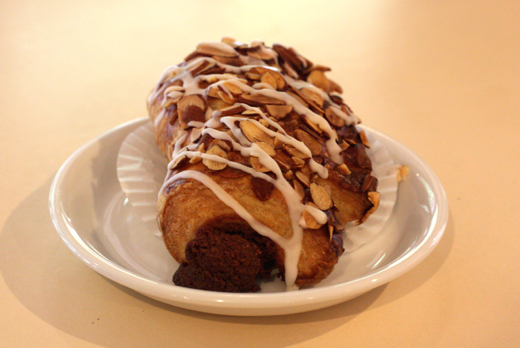 There’s also a fire pit in case you get the hankering to make s’mores at night. 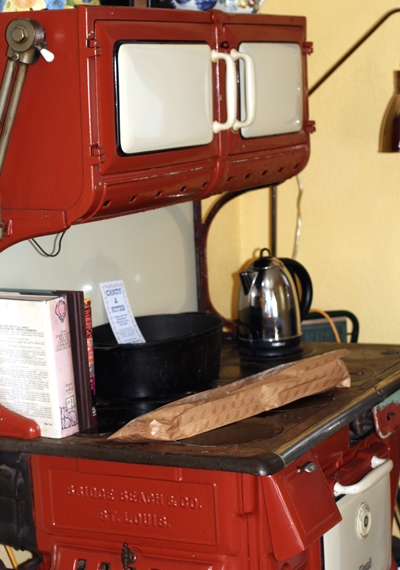 We stayed in the Creekside Cottage with the red door ($165 a night). The front room boasts a cute antique stove for decoration. There are two small bedrooms, each with a full-size bed covered with quilts. For a charming touch, each room has a few stacks of cookbooks — both new and vintage — for perusing.

We tucked in for the night, sleeping soundly in a peaceful Wine Country that still feels like the country. 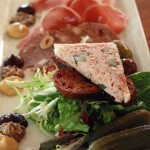 A Visit to Another Part of Sonoma County: A Visit to Chef Charlie Palmer’s Dry Creek Kitchen in Healdsburg and to Quivera Vineyards