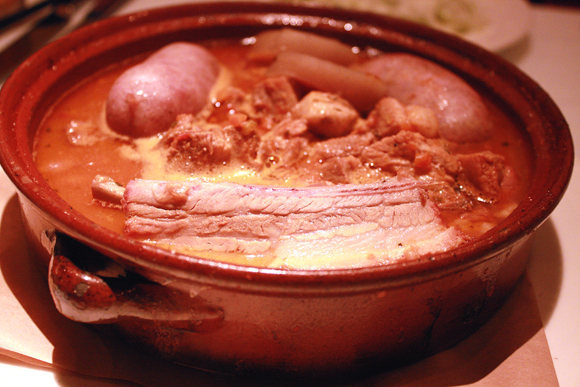 I made a pig of myself.

But when I got invited to try the 11th annual “Whole Hog” event at Oliveto in Oakland, that’s just what I had to do in the line of duty when confronted with an entire menu featuring pig parts of every kind imaginable.

And what a gloriously filling experience it was.

Yes, for a week earlier this month, the restaurant abandoned its regular menu to feature one spotlighting only porky goodness. Twenty-five pigs and hogs from family farms were used to create an amazing range of à la carte dishes from boudin blanc “Wellington” tart with sticky Barhi dates to smoked ham with kumquat-clove gravy to terrina of pork ears with horseradish to Valhrona chocolate-caramel tart with candy-coated pancetta. Yes, pig even in the desserts.

The dining room was packed the Saturday evening that my hubby, aka Meat Boy, and I were there. Diners eagerly eyed every dish that was carried out of the kitchen, pondering just which dishes to order, themselves. You could see diners unabashedly quizzing others nearby about the merits of particularly intriguing dishes on their table. 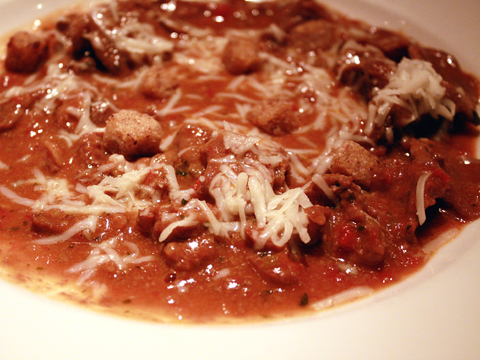 I don’t think I’ve ever had so much meat at one sitting. We started with Sardinian pork cheeks ($14). The second the dish was set down, you could smell the sweet, earthy perfume of saffron in it. Bite-size, incredibly tender slivers of pork had been braised with that pricey spice, as well as mint, aged provolone and a tad of polenta to give the sauce depth and body. We used crusty bread to happily sop up all that remained on the plate.

Next up, a dish that honestly doesn’t photograph well and might make a few people squeamish. But it was my favorite one of the night: Pappardelle nere with pork heart and wild mushroom ragu ($19.50).

Reddish-brown on reddish-brown, it was. And absolutely extraordinary, it tasted. 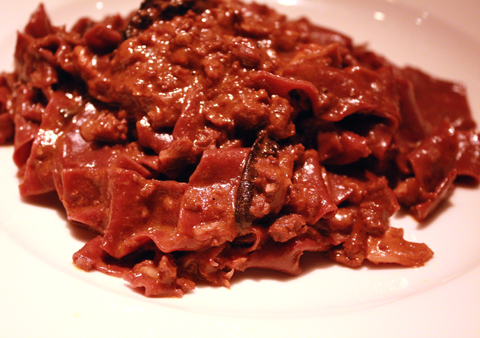 Pork blood goes into the pasta dough rather than water, giving it a much deeper color. Still with me? The super silky, tender fat noodles are coated with a thick, rich, ragu of mushrooms and finely chopped pork heart.

The metallic taste of blood and offal, which can be off-putting in strong doses, was not evident here at all. Instead, you were left with a dish that was so complex in flavors. It was at once earthy, meaty, loamy, savory and incredibly sumptuous. It wasn’t a dish you tried on a lark just to say you had pork heart, then pushed away after a few bites. It wasn’t a dish you vowed to never order again, either. Indeed, it was a dish I wish was on the menu each and every night because I would gladly order pork heart pasta again, well, in a heart beat. 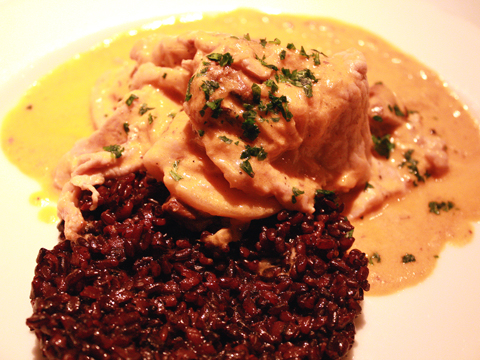 Then came a veritable cauldron of meat — “Tofeja del Canavese” ($29). Talk about a Meat Boy kind of dish. Think a Piedmontese version of cassoulet. A large, lidded earthenware dish was brought to the table. It held a bubbly stew of pork, pork and more pork. There were chunks of pork shoulder, a couple of  plump sausages, large wild boar spare ribs, slices of pork skin rollatini that were like pork jelly in your mouth, and the world’s best Borlotti beans that had soaked up all the fatty, porky juices. It was so much meat that even Meat Boy could only eat half of it. And that’s saying a lot. It made a fine lunch the next day, too.

Although there were seven dessert choices, we knew immediately which one we wanted the minute we saw it on the menu: Candy cap mushroom flan with bacon-covered chocolate honeycomb candy ($9.50). 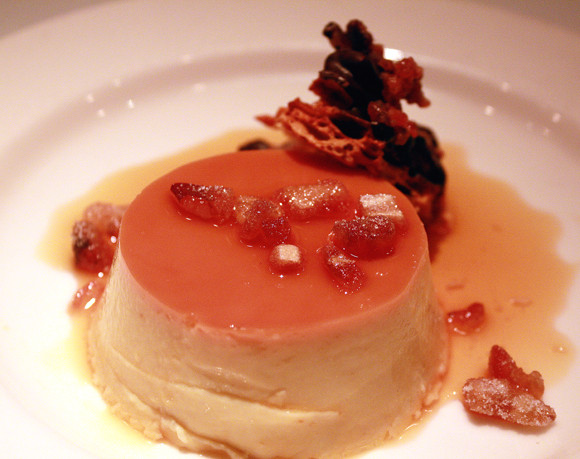 If you’ve never experienced candy cap mushrooms, you’ve been missing out. These wild mushrooms grow in California for just a brief window of time each year. They are so perishable that you find them mostly sold dried, not fresh. These mushrooms are used primarily in desserts because of their beguiling, concentrated maple syrup flavor with a hint of curry.

The dried mushrooms are steeped in the custard base. The resulting mooth, eggy flan was topped with burnt-sugar caramel and a confetti of Derrie dates that had been softened by cooking in bacon fat. Alongside was a small, crunchy tower of bacon-chocolate candy that tasted of smoke and pig.

Unfortunately, “Whole Hog” only comes around once a year. If you missed it this time, do yourself a favor and make a point to pig out for sure next year.