At this time of year, who can’t get enough of those glorious little sweet orbs that crunch and squirt fuchsia-hued juice everywhere when you bite into them?

Luckily for me, I have CJ Olson Cherries in my hood. The charming fruit stand in Sunnyvale is a testament to times past, when the shopping center now surrounding it was instead lush cherry orchards. Those trees may be gone now, but the stand, which has been family-run there since 1899, remains the place to buy cherries.

When I stopped by a week ago, there were close to half a dozen varieties to choose from, including those lovely rosy-yellow Rainiers. But which to bake with? That was the question on my mind. The helpful clerk suggested the classic Bing, because it’s what Olson’s uses in its famous cherry pies that are so flaky, buttery and bursting with fruit that you simply can’t say “no” to a slice or two or three.

The Bing, he advised, has a quite crisp exterior, which helps it keep its shape better when baked. It also has a more complex flavor with almost a wine-y quality, which will give any baked good a lot more depth and nuance.

I toted home my bag of deep burgundy-colored cherries and set to work with my handy-dandy pitter.

They were destined for a special treat — “Cherry Focaccia with Rosemary.” 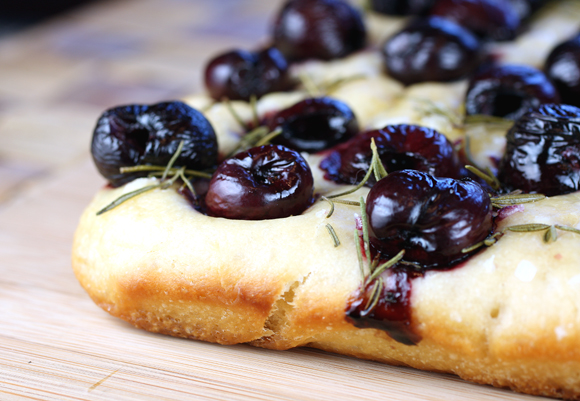 I took an original recipe for “Red Grape Focaccia”  from the October 2006 issue of Cuisine at Home magazine, only I swapped out the grapes for cherries instead.

The dough starts with a biga — a mixture of water, yeast and bread flour that slowly ferments in the refrigerator overnight for maximum flavor. More bread flour is later added, then the mixture is allowed to rise for about 2 hours.  Then, it’s patted out into a pan to rise a final time for 1 hour.  A good drizzle of olive oil goes over the top, along with a scattering of fragrant rosemary needles and sea salt. It bakes just 4 minutes in the oven to give it some sturdiness, before you pull out the pan, then carefully push your pitted cherries into the top. Back in the oven it goes until it emerges golden, puffy and crowned with warm, juicy fruit.

This focaccia has a nice chewy crust, and a tender interior. There’s a sweet, round fruitiness from the cherries, yet a savory-ness from the salt and pine-y rosemary.

Serve it for breakfast like you would a pastry; alongside a glass of lovely Pinot Noir; paired with some salty, creamy cheese after dinner; or as an accompaniment to an entree of pork or duck.

Whatever you do, make some before cherries up and disappear for the season. 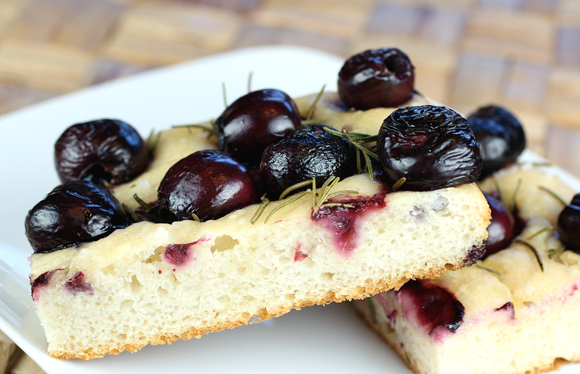 For topping the dough:

Whisk water and yeast together for the biga in a glass or metal bowl. Add 1 cup flour and whisk until smooth. Cover with plastic wrap and chill overnight (but no longer than 16 hours).

Before preparing the dough, bring the biga to room temperature, setting it on the counter for 1 hour. It will be thick and foamy.

Combine biga, 2 cups flour, 2 teaspoons salt, and sugar for the dough in a bowl of a stand mixer fitted with a dough hook. Mix on low speed for 1 minute, or until incorporated.

When the dough is doubled in size, it’s ready to go into the baking pan. While a glass 9-by-13-inch pan works fine, metal results in a crispier crust. You also can divide the dough in half and put it into two 8-inch or 9-inch square bans (bake for only 20-25 minutes). Whatever pan you choose, drizzle about 3 tablespoons olive oil in it, then smear to coat, using your hands. Press dough evenly into the pan, cover with plastic, and let rise until 1-inch thick, about 1 hour. Preheat oven to 400 degrees. If you have a baking stone, place it in the oven as it will help crisp the bottom crust.

Top dough with rosemary. Coat fingers with nonstick spray, then press them into the dough to “dimple.” But not too many, though, or the dough will collapse. Drizzle dough with 4-5 tablespoons oil and sprinkle with coarse salt. Bake for 4 minutes, then top with cherries, gently pushing them into the dough just a little bit. Continue baking until golden brown, 20-25 minutes. Cool on a rack for 5 minutes, then slice. The focaccia is best served the same day it’s baked.

Adapted from a recipe in Cuisine at Home, October 2006 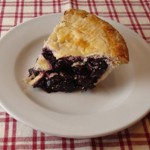 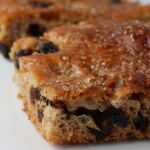