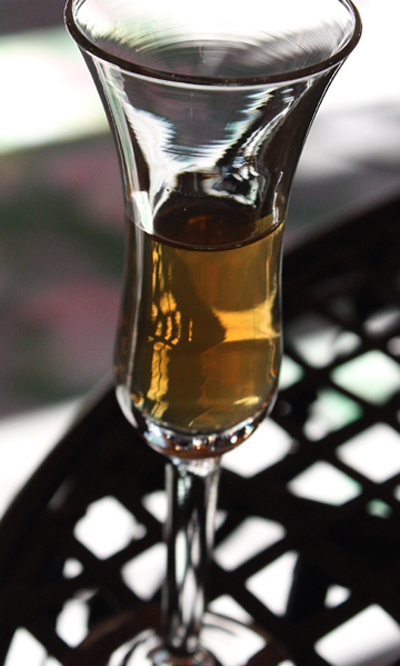 QUEBEC, CANADA — Yes, it’s chilly to the bone in winter, but if you’re not adverse to bundling up in a heavy coat, gloves, scarf and a hat, there’s much that will enchant during this time of year in the only walled city north of Mexico City.

The first time I vacationed here, it was during the more balmy spring-time. I also was limited in my sight-seeing to just within and just outside the imposing stone walls of this historic city. This time around, I got to explore further, thanks to Quebec City Tourism, which invited me, along with other food writers from around the country, to visit as guests late last year.

What a treat it was, especially to see Ile d’Orleans for the first time, the bread-basket of Quebec. The rural island, 20 miles by 5 miles, is 10 miles northeast of Quebec City and connected to the mainland by a bridge. There is but one traffic light on the island, which is made up of six parishes. In the winter, the population is about 6,000. In the summer, it doubles with visitors, as well as locals who have vacation homes here.

In the summer, folks from the city drive over to pick fresh, ripe strawberries. In the fall, it’s a profusion of apples. In winter, it’s all about maple syrup. Our trip started at Vignoble Sainte-Petronille winery, where we had a chance to sample a variety of icewines or vins du glace. Made from frozen grapes, the wines have an almost syrupy body. They’re sweet to be sure, but not at all cloying. 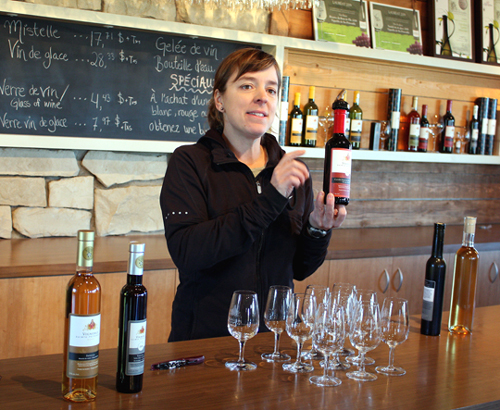 On a tour of the vineyard, we could still see loose grapes, bundled in netting that hung from the vines, awaiting Mother Nature’s chill before being gently pressed. Our next stop was Cass ‘Isle d’Orleans, the largest grower of organic black currants in North America.

The farm produces about 100,000 pounds of the fragrant purple-black berries annually, with most of it going into gourmet food products such as a fabulous black currant ketchup, jelly, and salad dressing, as well as their famed vinegars. 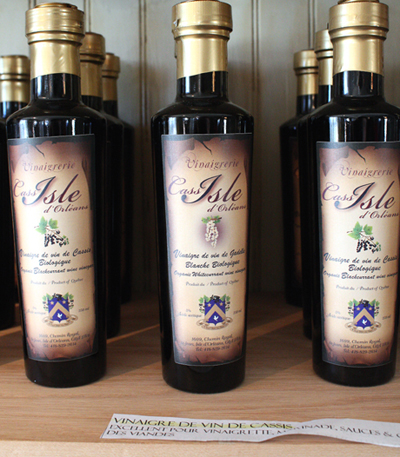 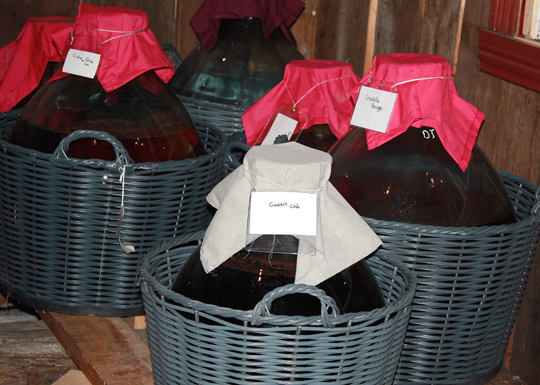 The vinegars are made in the artisanal way, aged in barrels and bottled with the “mother” or bacteria still in it, which is rare these days. The bacteria is usually strained out of most mass-produced vinegars because its sometimes wispy or slimy film may cloud the vinegar, which some consumers find off-putting. But opponents of that method believe filtering out the “mother” may kill nutrients and even some of the flavor of the vinegar.

For lunch, we enjoyed a memorable “table de champetre” or “country dining” experience at Au Gout d’Autrefois, a geese and duck farm. Many of the farms on the island will serve lunch made with the products they raise and grow — if you reserve ahead of time. 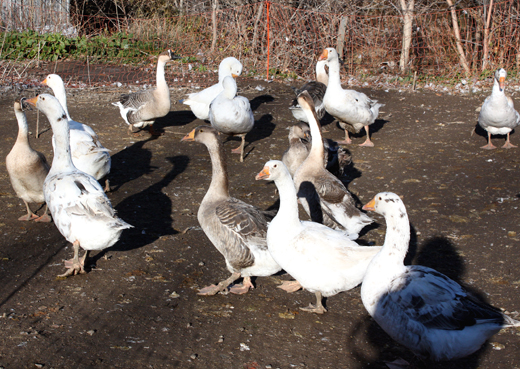 What made this 200-year-old farm particularly intriguing was that it purports to make foie gras with a technique that doesn’t involve so-called “force-feeding.” The owners researched which breeds are the most gluttonous and created a new breed with an especially hearty appetite.

Unlike other farms that put their geese on grain for just a few months, this farm puts its birds on grain for a more extended period of time — eight months. In the winter, the birds eat corn boiled in molasses, a treat they seemingly can’t get enough of. The farmer will feed them only a small quantity every few hours, so that they end up wanting more and more.

In this way, the farmer explained, the ducks and geese end up less stressed, and with much more tender meat. About half the geese now get plump enough from this process to produce foie gras, a percentage that increases each year. Last year, this small farm produced 1,200 geese, ducks and wild turkeys.

Nearly all of the ingredients in the meal were grown or raised here in the organic gardens. The cooking is done without cream, butter or pork fat. The only fat used comes from the ducks and geese. No salt or pepper is added to the food, either, so that the natural flavors shine through. The highlight of the meal had to have been the starter: a plate of three different types of rillettes — goose, wild turkey and duck. Rich, with a powerhouse of flavor that just lingered on your palate, this was one of the best things I’d eaten in awhile — and that’s saying something.

Fortified from lunch, it was off to Cidrerie Verger Biloudeau, the first cider house to open on Orleans in 1980. The cidrerie boasts 3,500 apple trees, including Cortland, Spartan, MacIntosh and Honey Crisp. Its ciders range in alcohol from 6.5 percent to 18 percent, and include still, sparkling and ice varieties. 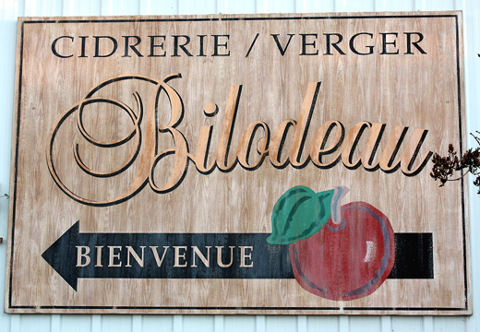 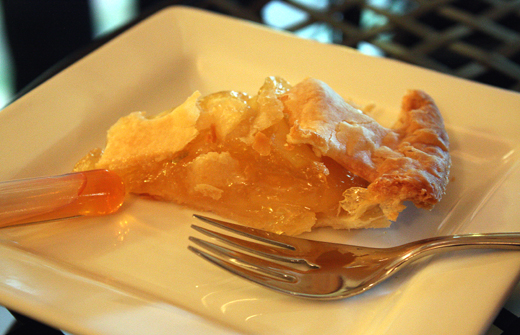 Most of the ciders are generally lower in alcohol than grape-based wines because of the lower sugar content of apples. As a result, the fermentation process for cider also is longer. 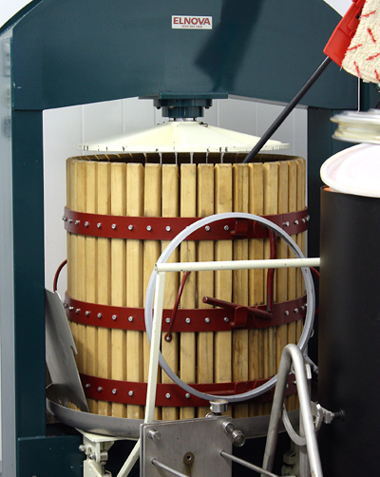 It takes 40 pounds of apples to yield 11 liters of cider or 3 liters of iced cider. Indeed, it takes five hours to gently press five cases of frozen apples to make the ice cider. The sparkling cider is made in the method champenoise way with two fermentation cycles — first in the barrel, then in the bottles, which are riddled by hand.

Next, it was off to Cabane a Sucre l’En-Tailleur, a sugar shack where sap is tapped, then boiled to make everyone’s favorite maple syrup. One tree produces about 1 liter of syrup. And the same tree can be tapped for 200 years.

The lightest colored syrup, which contains more water, comes at the beginning of the season, generally around February. The darker syrup, which has more sap, comes later, around May.

A sugar shack worker had set up a trough of snow, where he poured maple syrup in neat rows over it. As it hit the cold surface, the syrup thickened, transforming itself into the texture of taffy that we twirled around wooden sticks to enjoy like lollipops. It doesn’t get much better than that. Although it wasn’t on our official tour, a few of us sweet-talked our driver into taking us to Cassis Monna & Filles before heading back across the bridge. After all, who could pass up a visit to a family-run operation, where a father and his two daughters produce astonishing black currant wines and Creme de Cassis. 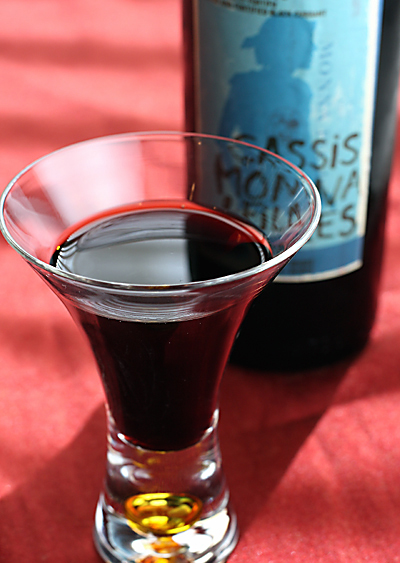 The family grows many varieties of black currants, which are harvested in August. I fell hard for Le Capiteux, a maderized and fortified port-style wine made from the berries. So much so that I had to tote a bottle back home with me in my suitcase. With its flavors of vanilla, prune, nuts and French roast coffee, it’s glorious with strong cheeses or dark chocolate.

Or just sip it solo, as I enjoy doing now, while reminiscing about this foodie island paradise. 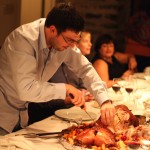