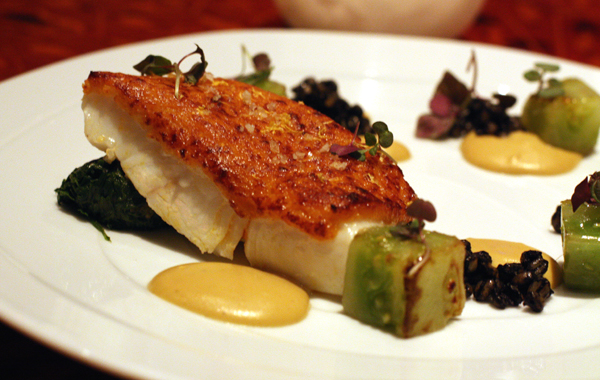 You may have enjoyed the warm, earthy flavors of  Moroccan cuisine before.

But you’ve never experienced the likes of it at the Michelin-starred Aziza in San Francisco, a short drive from the Laurel Inn San Francisco.

The flavors of saffron, tomatoes, preserved lemons, sumac, and za’atar remain hauntingly familiar here, but have been put to use in daringly creative, boldly contemporary ways.

As chefs around the world have elevated Korean and Spanish cuisines to a whole new level, Executive Chef-Proprietor Mourad Lahlou has done the same with his native cuisine. Indeed, I don’t know if there’s another Moroccan chef out there who’s pushing the envelope quite like this Marrakech-native is.

Lahlou immigrated to San Francisco in 1986 and earned a master’s degree in economics from San Francisco State University. He was planning on getting a PhD next, when his brother asked him to lend a hand at his Moroccan restaurant in San Rafael.

Luckily for us, Lahlou grew so enamored of cooking that he never looked back.

In 2001, he opened Aziza to great acclaim. Back then, it was a very traditional restaurant, complete with belly dancers and classic, rustic tagines.

The distinctive curved archways, and the saffron and cobalt blue hues remain in the warren of dimly-lit dining rooms. But the food has undergone a true metamorphosis. There’s such sophistication and refinement now. The dishes never disappoint; they often dazzle and surprise.

When my husband asked me where I wanted to eat on my birthday last month, I didn’t hesitate with my response. Although my husband paid our tab, Lahlou, whom I’ve interviewed before, also sent out some complimentary tastes because he knew what we were celebrating. (Ahh, it pays to be Facebook friends.)

Aziza may be a decade old, but it’s as popular as ever. There were quite a few large tables that Saturday night with folks celebrating graduation. Even when we were about to leave around 9:30 p.m., the restaurant was still packed, with more diners still coming through the door, hoping to snag a coveted seat. Prices have always been reasonable, with most appetizers about $12 and entrees ranging from $16 to $29. 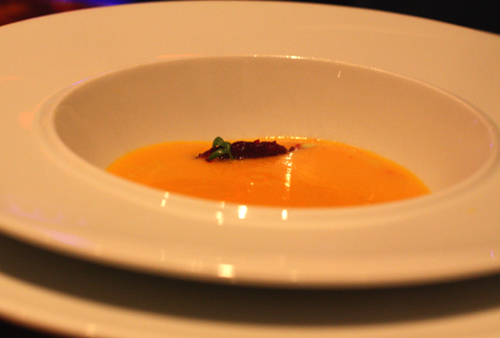 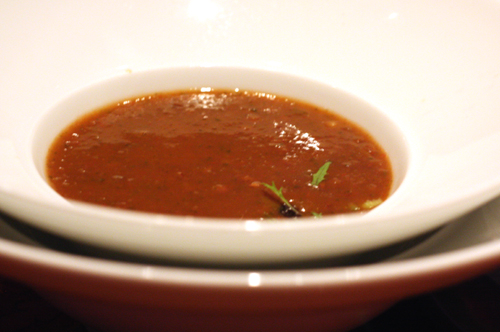 The restaurant sources organic, sustainable, seasonal products, with Lahlou scouting farmers markets regularly to find the best of the best. Half way through our dinner, even my carnivore husband couldn’t help but exclaim how amazed he was by the quality of the vegetables.

Some of those fresh ingredients are showcased in Aziza’s signature cocktails. I couldn’t pass up one made with cacacha, kumquats and ginger.

The amuse that evening was a shot glass of bright fuchsia soda made with hibiscus and citron. It was fruity, tart and fizzy — a perfect way to perk up the palate for what was to come.

First, a duo of soups — one, the silkiest carrot soup ever, and the other, probably the most complex lentil soup around, made with celery and dates for added crunch and sweetness to round out the developed, soft earthiness of the legumes. 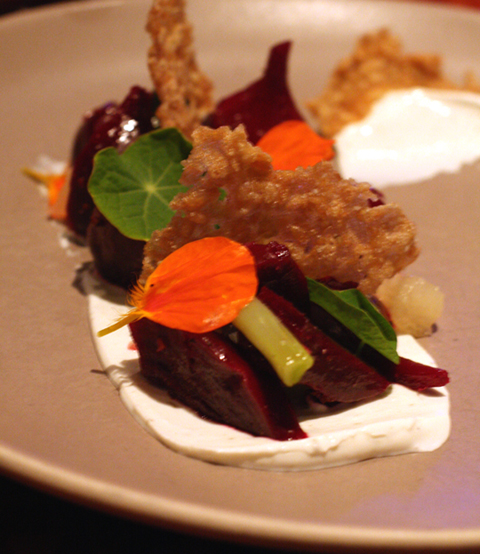 Next, sweet beets with licorice-flavored yogurt, the brightness of grapefruit and the unexpected crackle of tiny pieces of rice cracker.

Then, luscious King salmon that tasted like Lahlou had just fished it out of the water himself that day, complimented by salty olives, peppery radishes, sweet dates and juicy, soft young almonds that gushed when you bit into them. 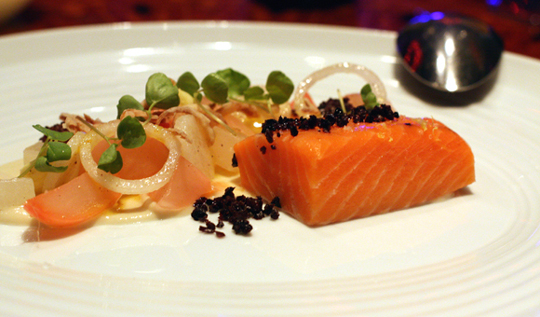 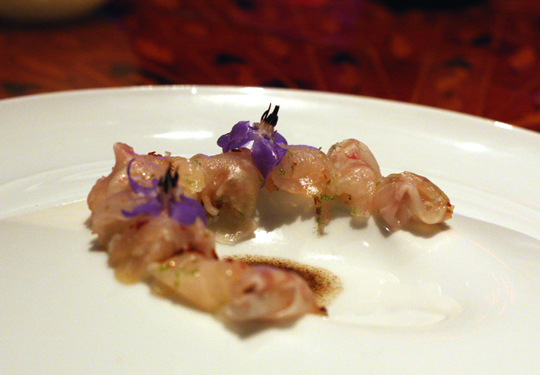 Sea bream sashimi arrived curled on the plate like a dragon with its subtle fire coming from a drizzle of burnt citrus oil and aleppo pepper.

Chicken wings are not your ordinary, messy bar food here. Instead, they are made neater by being boned out and cut into bite-size pieces with crispy skin and moist flesh. Stemmed cherries dotted the plate — already pitted for your convenience. 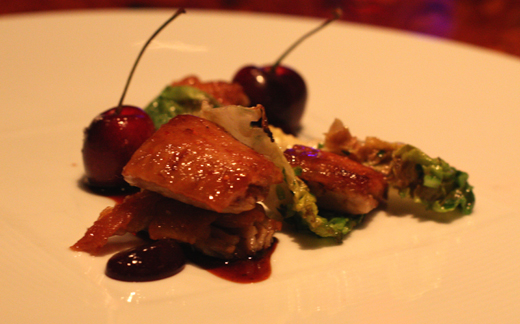 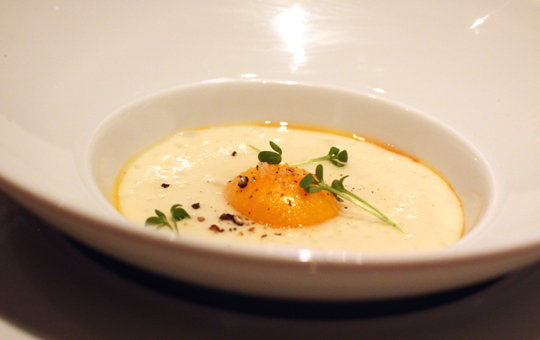 Mixed charmoula shows spectacularly the evolution of the food here. The spice mixture of herbs, olive oil, preserved lemons, garlic, cumin and salt is usually used in lusty stews. Here, it flavored a vegetable stew crowned with white potato foam and a bright orange yolk so that the dish looked as if a perfect sunny-side egg lay atop it. The whole dish — yolk and all — had been steamed, leaving the yolk as thick and creamy as pudding.

Basteeya, the savory phyllo pie dusted with powdered sugar, has always been a favorite here. This one did not disappoint. Crisp, buttery layers had been rolled around a filling of rich duck confit that hid crunchy green pistachios. Alongside it was wild nettle bread pudding with salsify and a decadent foie gras emulsion. 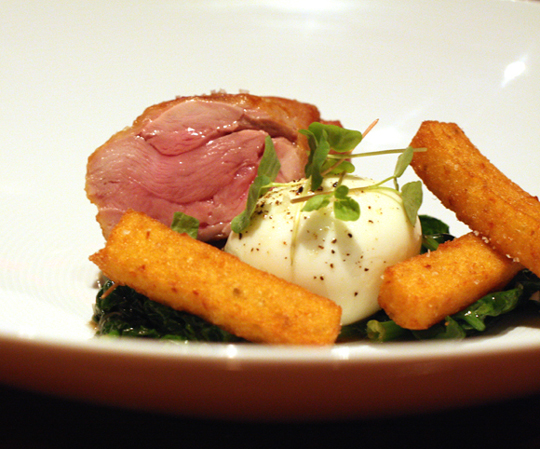 My husband’s main course was the evening’s special of a quail roulade, boned out, then rolled up tidily with a honey sauce. Stacked on the plate were semolina logs that were crisp on the outside and creamy within, as well as a soft, oozy egg to dip them into.

I still haven’t stopped thinking about my entree. Halibut with a crust of uni. How spectacular is that? Very. Lahlou mixes uni with panko and shavings of halibut to form a paste that he coats the top of the fillet with, then broils until it gets as crackling crisp as perfect chicken skin. The technique leaves the briny, sweet, savory uni tasting remarkably like a Parmigiano crisp crowning the mild, moist fish. It’s quite amazing, and perfect with the squares of acidic green tomatoes and puddles of lusty coconut curry. 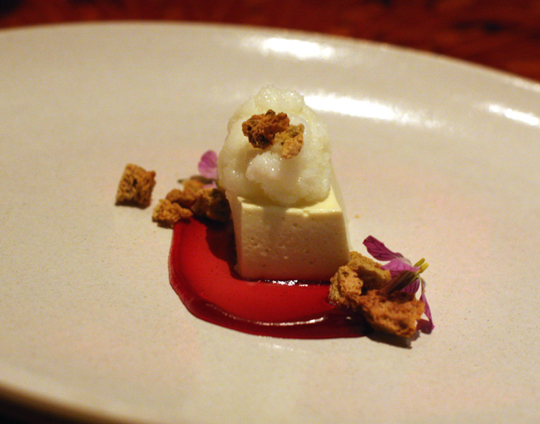 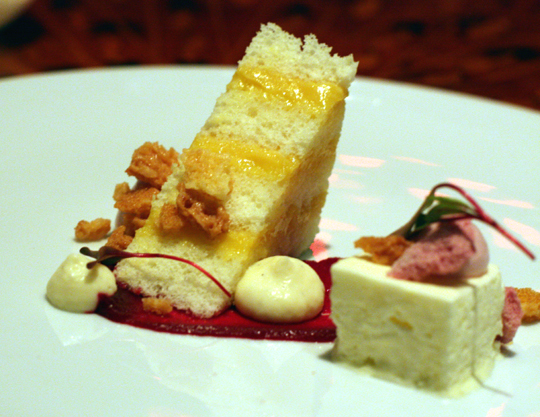 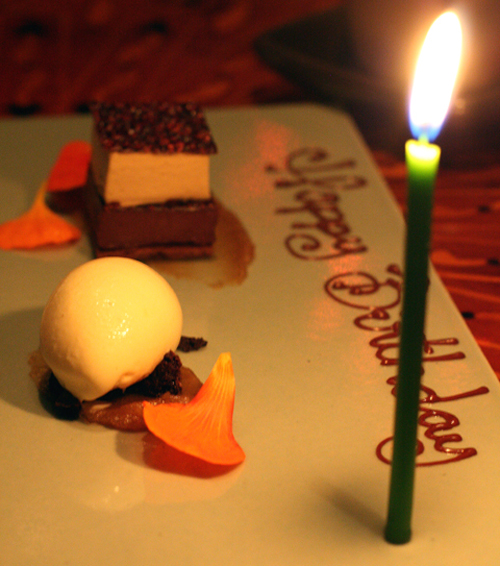 Dessert started with a light, refreshing bavarian heady with mint, sitting in a swoosh of hibiscus sauce and topped with lime-buttermilk granita.

That was followed by a slice of passionfruit cake, as airy as a cloud, alongside lemon semifreddo. A swirl of beet sauce was the final touch, its natural sweetness tying everything together.

Finally, chocolate ganache layered with chicory cream and prune puree, along with licorice root ice cream. Even if you think you’re not a fan of prunes, you will love how the flavor of dried plums marries so well with chocolate in the same way that aged port would.

So many restaurants offer handmade caramels just before setting down the check. But few are as memorable as the ones by Aziza Pastry Chef Melissa Chou, who was a finalist this year for a James Beard award. These tiny squares of chocolate caramel are fudgy with little crispy bits, making them a lot more interesting than so many others. 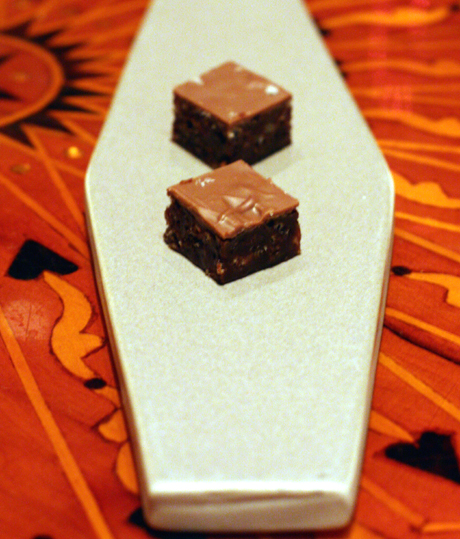 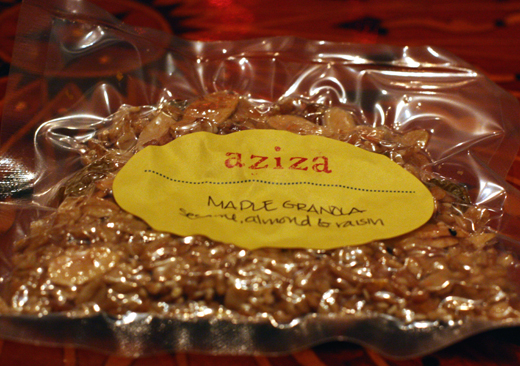 Before you head out, little bags of sesame-almond-raisin granola are brought out for you to enjoy at home. The bags are vacuum-sealed for freshness, too.

In the future, Aziza will be moving to a new location at Jackson and Montgomery streets in the Jackson Square neighborhood. Construction already has begun on that site. Lahlou plans to keep the current site, but is unsure yet what concept it will eventually morph into.

If the past is any indication, it’ll be worth the wait at both locales to see what Lahlou dreams up next. 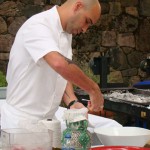 And: His Recipe for Lamb Tanjia