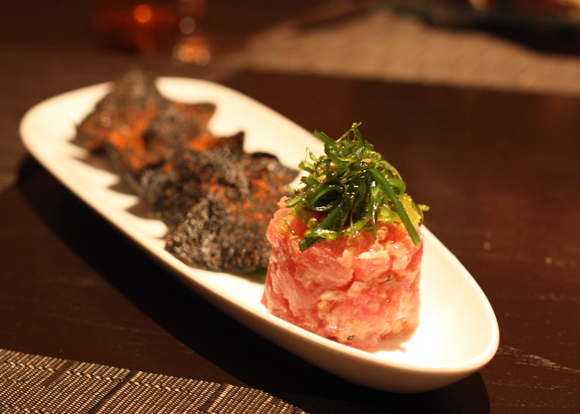 But that’s a shame because you would be missing out by not looking up.

Three stories high to be exact.

That’s where you’ll find Citrus Restaurant in the Valencia Hotel.

A bit hidden and an elevator ride up three floors, the dimly lit restaurant with bare dark wood tables that overlook a sunny central courtyard, is worth making the trek. 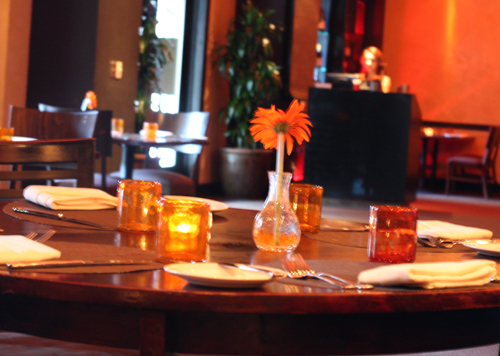 Executive Chef Robert Sapirman, who  previously headed Parcel 104 in Santa Clara, is slowly but surely personalizing the menu since coming on board a year and a half ago. He’s awaiting the planned top-to-bottom renovation of the hotel, though, before transforming the menu completely into one of eclectic global tapas. That major hotel remodel, which has already been pushed back a couple times, may start later this year. For now, you can get a good feel for what’s to come cuisine-wise, as Sapirman’s menu already boasts many Asian and Spanish influences.

Recently, I was invited in as a guest of the restaurant for dinner.

Appetizers run from $8 to $15, with entrees from $18 to $48 (American Kobe New York steak). The first thing you’ll notice is Sapirman’s flair for adding creative, updated touches to dishes that at first glance might seem old hat.

For instance, you’ve probably seen ahi tuna tartare on hundreds of menus. But here, it’s served with coal-hued nori chips made even more striking by the sprinkle of fiery red Japanese dried pepper on top.Think of it as a deconstructed spicy tuna roll. 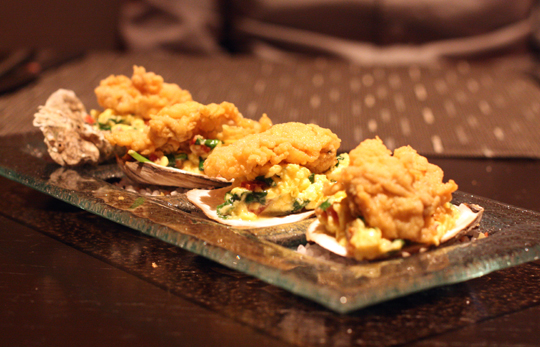 Oyster hang-town fry is an oldie but goodie that’s typically served as a rustic-looking scramble. Here it gets all glam — served back in the oyster shells to eat one at a time. Eggy,, briny and smoky with bacon, it’s not only fun to eat, but downright delicious.

Big, plump diver scallops arrive seared beautifully with cubes of buttery, soft bread pudding alongside. An intense and thick romesco sauce gives a burst of acid to liven up everything. 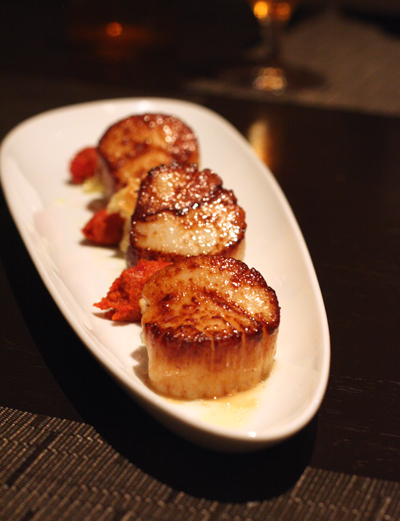 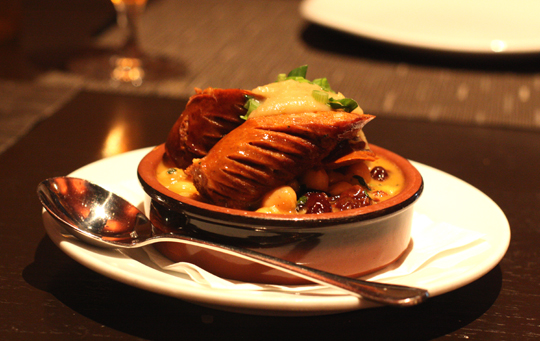 You don’t see sturgeon on many menus, which is a shame because it’s rated a “‘good alternative” by the Monterey Bay Aquarium’s “Seafood Watch Guide.” The meaty, substantial flesh is pan-seared here and accompanied by an interesting mix of fiddlehead ferns and sea beans in a light miso broth. 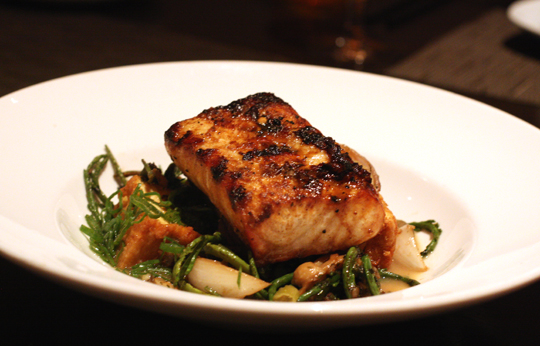 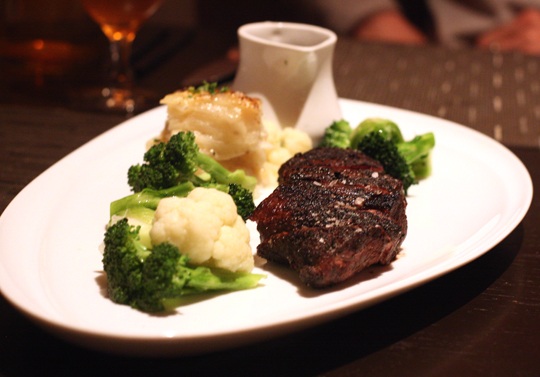 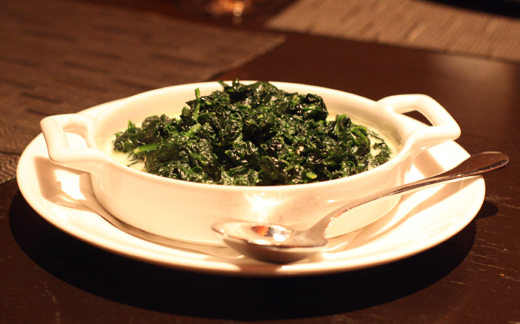 My husband’s flatiron steak was cooked the requested medium-rare, the juicy meat made more savory tasting with a Worcestershire sauce. A rich gratin layered with Gruyere made for the perfect meat-and-potatoes marriage.

I couldn’t resist a side of creamed spinach — flavored with absinthe, of all things. Yes, the wicked green fairy adds a quite pleasant sweet anise flavor that plays nicely with the minerality of the spinach. It’s not boozy at all, as the cream tempers the alcohol’s normal aggressiveness.

Pastry Chef Rosalynn Vu’s creations are definitely worth saving room for. Donuts, light and fluffy, are rolled in cinnamon sugar and served with two decadent dipping sauces: chocolate and vanilla-toffee. 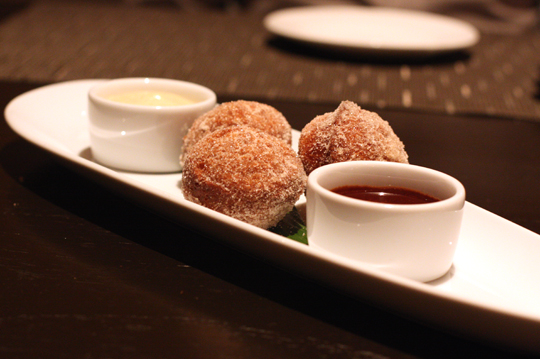 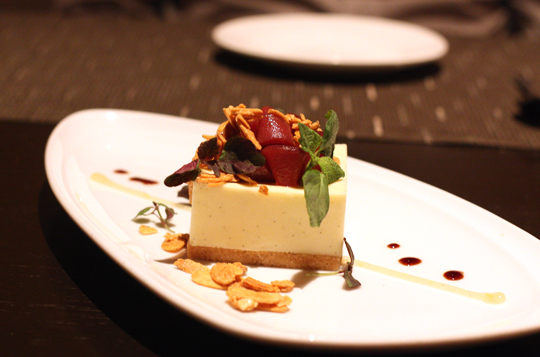 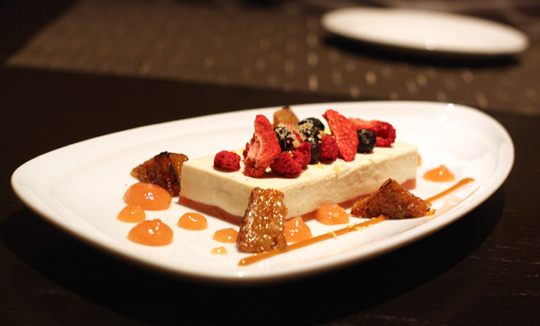 An ethereal cheesecake, lightened with mascarpone, is garnished with sangria-soaked pears and the lilt of shiso.

A square of creamy panna cotta gets a textural contrast with buttery morsels of French toast and the crunch of freeze-dried berries strewn over the top. The sprinkle of Pop Rocks, a little too 2008, wasn’t even needed.

The next time you’re out meandering on the Row, do yourself a favor: Look up — for a really fine meal. 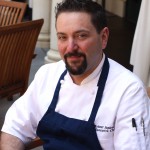 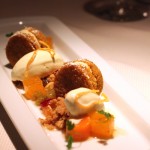