A Gin-Tastic Time at Brasserie S&P The last time I dined at the Mandarin Oriental Hotel in San Francisco a few years ago, I shimmied into a chic cocktail dress and fancy black heels.

On a visit there just a few weeks ago, though, I donned merely dark jeans and a simple cardie.

Like so many hotels in these still precarious economic times, the Mandarin Oriental has shed its spendy, special-occasion restaurant in favor of a more casual one that’s friendlier on the pocketbook.

Out went its glamorous Silks restaurant. In came the new Brasserie S&P this summer, named for the fact that it’s at the intersection of Sansome and Pine. It’s headed by Executive Chef Adam Mali, formerly of Nick’s Cove in Tomales Bay.

While Silks was perched on the second floor of the hotel, Brasserie S&P is on the main floor, just past the check-in desk and right across from a bank of elevators. While the former was a secluded, hushed space, the latter is smack in the middle of all the action.

I had a chance to check it out, when I was invited to dine as a guest of the restaurant.

The sedate dining room is all cream and blonde, with dark chocolate leather placemats on the tables. The decor may be somewhat too hotel utilitarian, but the snazzy bar and satisfying food more than make up for that. Mixologist Priscilla Young clearly is having a blast with the new cocktail menu, which spotlights gin, of all things. She even crafts her own tonics to go along with the extensive brands of gins available.

Admittedly, I think the last time I drank gin & tonics regularly was when I just graduated from college. Back then, it seemed so refreshing yet sophisticated a choice. But as I grew older, my leanings bent more toward wine. Young’s inventive concoctions, though, will have you hankering for gin, even if you can’t remember the last time you quaffed it. 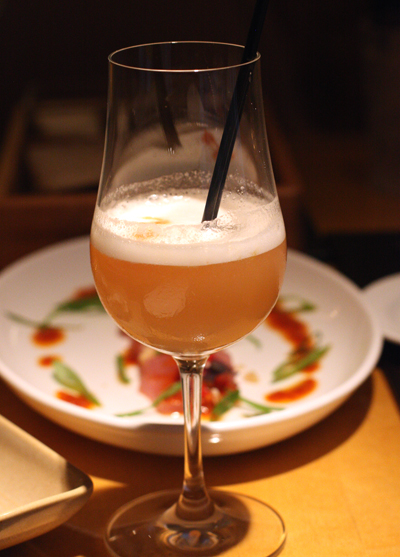 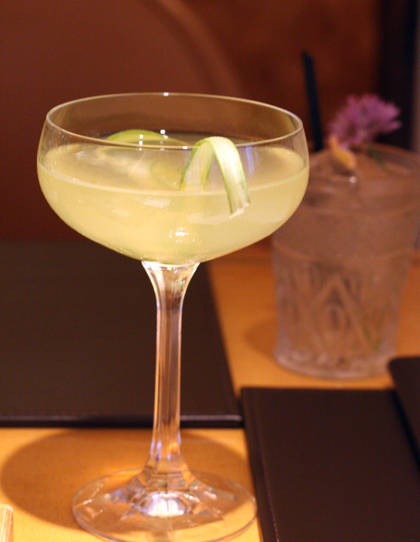 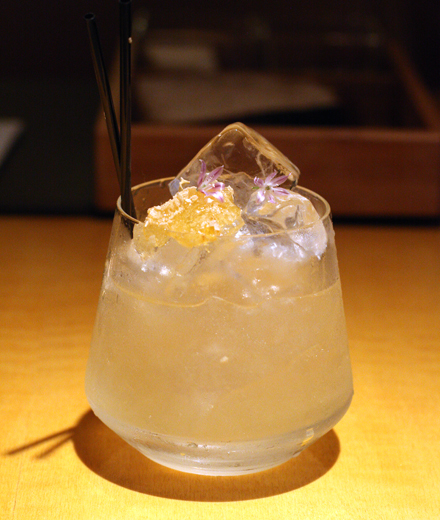 You can create your own gin & tonic, or choose one of the signature ones made with cucumber or even orange peel plus Thai chili. My husband gravitated toward “Indian Summer in Mt. Tam” ($14), with floral-grassy notes from St. George “Terroir” gin and Sensei saffron tonic water. My choice was “Garden Envy” ($15) a crisp sip of celery, green apple cold-infused Hendricks gin, Square One Cucumber vodka, lime juice and Galliano.

Young couldn’t resist bringing by samples of two other cocktails: “Madame Genever” ($14), made with organic coconut cold-infused St. George “Botanivore” gin, lemon juice, orange zest, Angostura bitters and a froth of egg whites on top. Next, “Bee’s Elbow,” a play on the classic “Bee’s Knees,” a Prohibition-era cocktail that used honey to mask the gin. In Young’s reinvented version, kumquat juice is added for a bright citrus hit and a splash of whiskey for smokiness. The drink, garnished with a cube of honeycomb, is one that Young is contemplating putting on the menu. It’s so memorable that there’s no doubt it deserves a place there.

If there’s still any question that gin is prominent here, each table in the dining room is set with a fresh flower in a tiny gin bottle.

If you’re one to normally bypass the bread at restaurants, you’d be making a mistake here, as the restaurant serves loaves baked in wood-fired ovens at Petaluma’s Della Fattoria. It’s some of the best bread in the Bay Area — and that’s saying something. 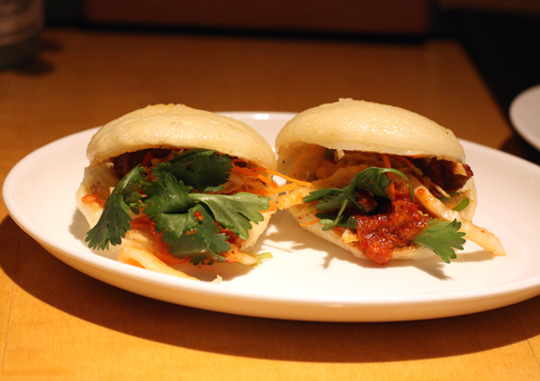 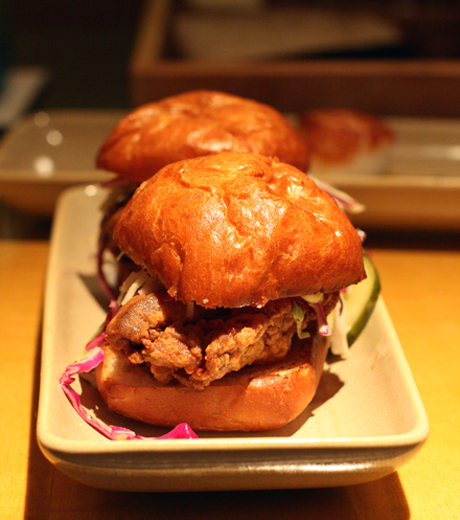 Mali’s dinner menu offers something for everyone. You can easily make a meal just from the starter share plates alone that offer up everything from the popular grilled pork and kimchee  housemade steamed Asian buns ($12) that are quite pillowy to sliders hiding crunchy fried chicken topped with creamy coleslaw ($15). 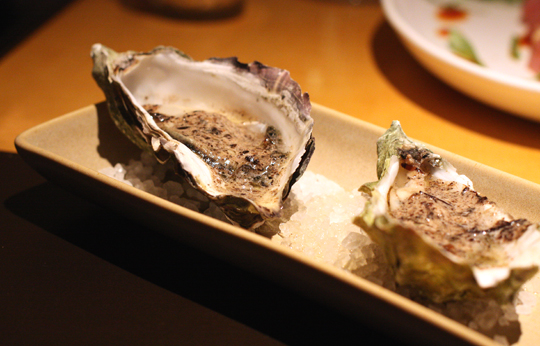 Drake’s Bay oysters ($7) may be baked, but barely so, leaving the bivalves still pleasantly plump and quivery with a slick of seaweed butter.

Georges Bank scallops ($14) are seared, then sauced with a mild Thai green curry. Mini potato latkes ($9) could have been a crisper, but it just might have been the warmth of the very flavorful Liberty Farms duck confit on top that left them a little soft.

Local albacore tuna ($17) is served crudo-style with the heat of red Fresno chilies and nutty sesame oil. Chopped macadamias strewn over the top of the mild raw fish added a wonderful, unexpected crunch. 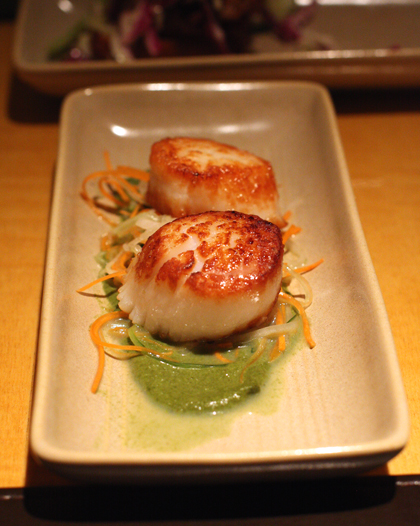 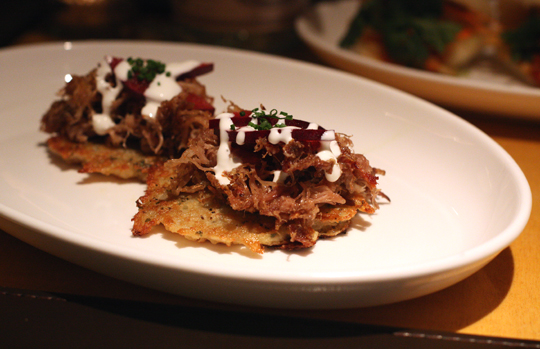 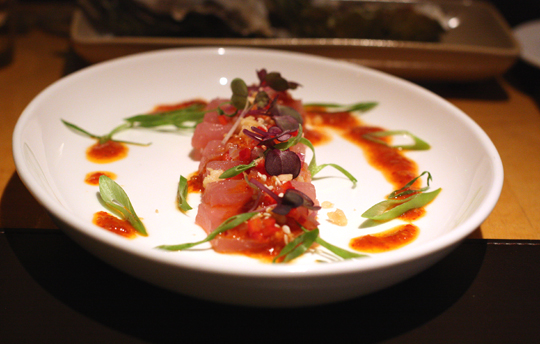 Dungeness crab Louis ($18) gets the chef treatment with homemade ketchup in the dressing. It makes for a more delicate Louie, in which the sweet crab meat and butter lettuce aren’t overwhelmed. 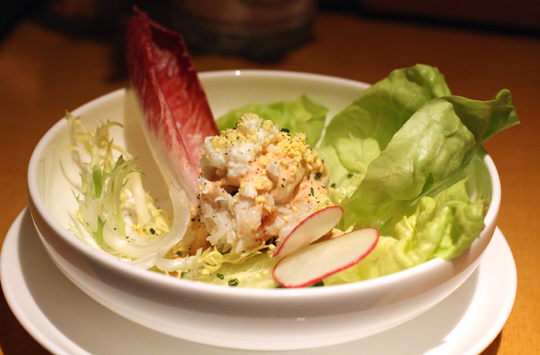 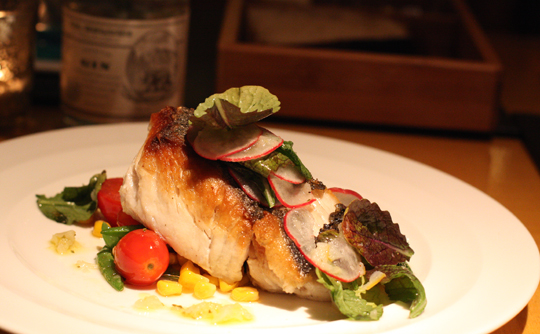 For the mains, Morro Bay white bass ($24) is roasted, leaving it moist and flaky. Snap peas wer nicely al dente and mustard greens added a hit of pepperiness in contrast to the bright preserved lemon vinaigrette.

Half Moon Bay wild King salmon ($27) was perfectly medium-rare in the center and drizzled with a lemon-caper sauce. 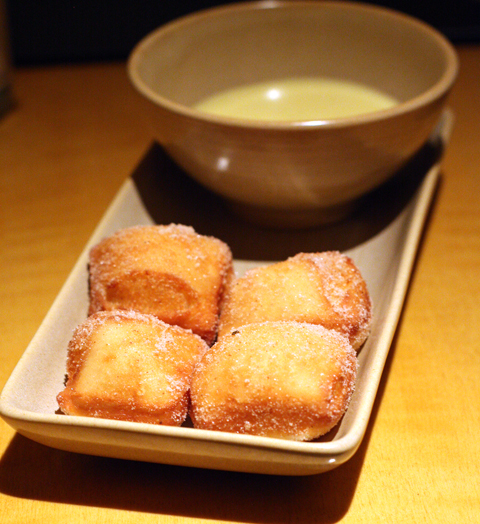 Desserts are $9 each. Tiny two-bite cinnamon-rosemary beignets are crisp on the outside and ethereal within. They’re barely sweet, so you can dunk to your heart’s delight into the bowl of Meyer lemon creme anglaise.

Profiteroles go all local with chocolate sauce made from San Francisco’s TCHO chocolate and mocha ice cream from the Bay Area’s Three Twins. 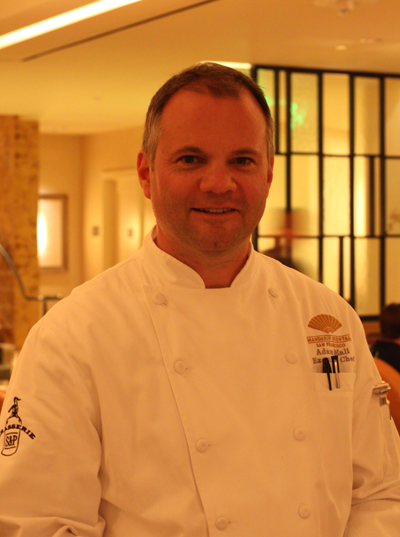 After that last bite, be assured that I was sure glad to be in comfy jeans this time around, rather than a form-fitting cocktail dress. 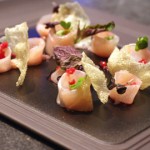 Another Hotel Restaurant Gone More Casual: Parallel 37 in the Ritz-Carlton 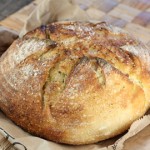 And: A Visit to Della Fattoria Bakery 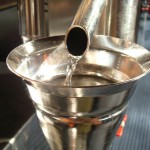 And: A Visit to St. Georges Spirits