Wine 101 at the International Culinary Center in Campbell 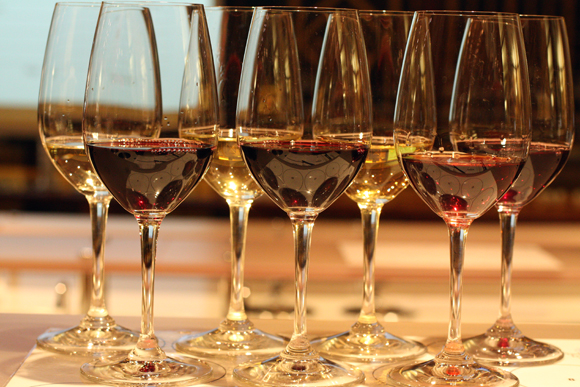 To get in the mood for this post, open a bottle of wine, pour yourself a glass, take a well deserved sip, then see if you can answer the following:

A) What are the three grape varietals typically used in the making of Champagne?

B) What common drug store item can help rid your wine glasses and decanters of red-wine stains?

Over the course of a week, I learned the answers (find them at the bottom of this post) to these questions and so much more as a student in the “Wine Foundation” class at the International Culinary Center in Campbell.

The class, which I was invited to take gratis as a guest of the school, stretched over seven nights for four hours at a time. I figured by the end of it, I’d either be an expert or totally tipsy.

Fortunately, it was bordering more on the former. Although, I’d taken one or two wine classes before, they were more truncated. Getting the opportunity to take such an intensive and comprehensive class really gave me a grasp on wines like never before. Indeed, over seven days, we learned not only how wine is made, but wine-tasting techniques, what goes into wine service at a restaurant, the basics of food and wine pairing (complete with food prepared by culinary students), and an overview of what varietals are found around the world. 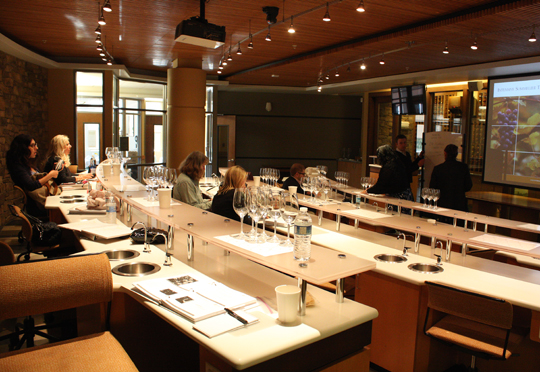 It says a lot that the ICC is the first school to ever be approved by the renowned Court of Master Sommeliers. How rigorous is the process for becoming one? Consider that only 3 percent who take the final exam to become a master actually pass — and that’s usually after failing on multiple previous attempts.

Our instructor was a certified Master Sommelier, one of only 197 in the world: Jesse Becker, who began his sommelier career at Charlie Trotter’s in Chicago, most recently put together the wine program at AQ restaurant in San Francisco, and runs his own wine importing business, PWMWINE.com. There were 10 of us in this particular class, only one of whom was a man. Most had high-tech backgrounds of some sort, too. A few were toying with career changes, but more were there just to educate themselves about a topic that’s long fascinated their palate and mind.

Our classroom was a sight to behold — tiered theater-seating with a small sink at each place (all the better for spitting, and believe me you have to, given the number of wines you will try on a given night), as well as a light box underneath, all the better to help judge the color and hue intensity of each wine. Directly behind the lectern area is the school’s impressive glass-fronted, temperature-controlled wine cellar, with bottles stacked nearly to the ceiling. It’s where Becker retrieved our “school supplies,” so to speak.

Each evening just before class began, you grabbed the wine glasses you’d be using, and one by one, held them over a steaming kettle of water, then wiped them clean. It’s a ritual all sommeliers know from working at restaurants and one that Becker wanted us to experience as we embarked on this wine journey together.

The glasses we used, Riedel (say it like “needle”) Sangiovese glasses from the company’s restaurant line, are the same ones used by the Court of Master Sommeliers. Our tasting grids for blind tastings were a simplified version of the one used by Master Sommelier candidates. 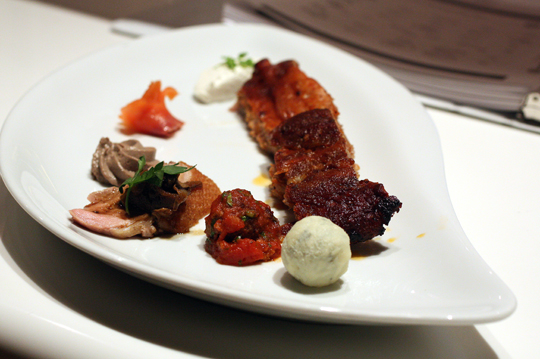 It can be intimidating to blind taste in front of others, in which you try to deduce what a particular wine could be just from smell and taste. When it’s your turn to do so, you take a whiff from the glass, squint your eyes because you somehow think that will make your nose sharper, then go for it: You take a stab at what fruit, non-fruit, earthy and wood aromas you discern. Was that green apple or yellow apple? Are those herbs of some sort? But which ones?

With everyone is in the same boat, though, in terms of hitting the mark sometimes and being completely baffled other times, you feed off everyone else and gain confidence in the end. Plus, Becker offered helpful hints along the way to make sure we never got completely off track.

I used to think that sommeliers had super hero powers. Somehow, all it took was one quick sniff and one meager sip for them to figure out confidently exactly what they were drinking. It seemed like they pulled the answer out of thin air because they were practically divined to do so. 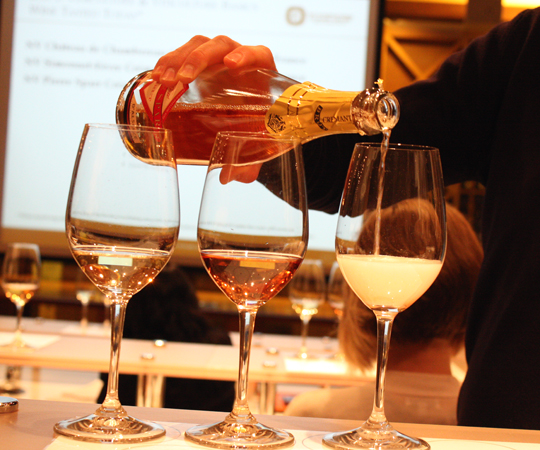 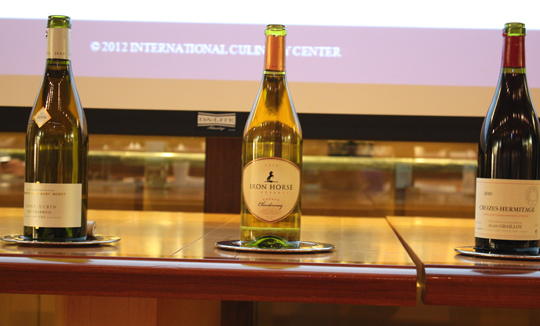 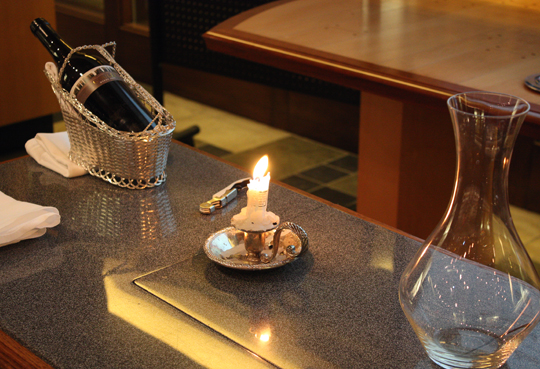 What I learned from other wine classes, though, and which was solidified by this one, is that when it comes to blind tasting, its more like playing wine detective. You sip, you swirl, you taste — all the while looking for clues to solve the mystery of what’s inside the glass.

Can you read a newspaper through the glass of red wine? Then, it might be a light-skinned grape such as Pinot Noir or Gamay. Or is it very dark? Then, maybe it’s a thick-skinned grape like Zinfandel, Syrah, Malbec or Cabernet Sauvignon.

Are fruit flavors dominant in the wine? Then, probably it comes from a warm climate, in which the grapes can get very ripe, such as the Napa Valley. Or is there pronounced minerality and chalkiness? Then, maybe the wine is from a part of France known for its especially chalky soil.

Tilt the glass. Is the outer edge of the wine a different color than that of its core? Then, it’s a wine that has some age on it.

And so it goes. 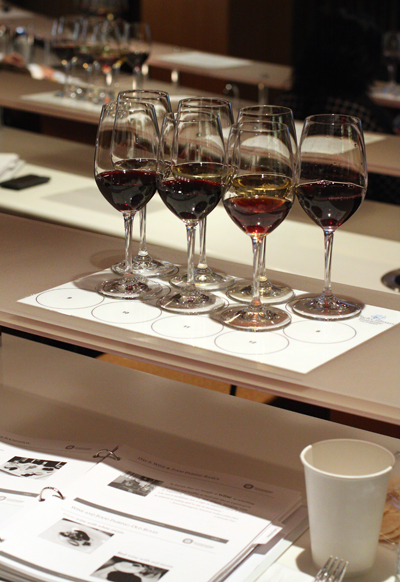 The “Wine Foundations” class is not inexpensive at $1,200. But if you’ve ever wanted to immerse yourself in the world of wine, this one is a worthwhile way to do it. Even after seven nights together, my classmates and I left thirsting for more.

Answers to Questions Above: A) Chardonnay, Pinot Noir and Pinot Meunier. B) Would you believe Efferdent? C) Green. D) Tomato leaves. 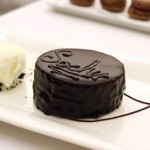 More: How to Enjoy a (Free) Meal Cooked by Culinary Students at the International Culinary Center 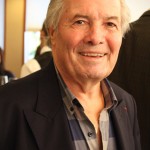