The dinners will be held in a deconsecrated synagogue, B’nai David, which now houses a host of artists, as well as their photography and paintings.

The family-style dinner, which includes wines, will include rolled capon stuffed with walnuts, Vidalia onions, dried porcinis and Swiss chard; rainbow beets with fennel and string beans in a balsamic vinaigrette; and apple galette with apricot preserve whipped cream.

Otter Pops at the Four Seasons in San Francisco

You remember those fun, frozen, tubular Otter Pops from your childhood, don’t you?

Well, the Four Seasons in San Francisco has made what might possibly be the most delightful adult-version around with fresh raspberries, simple syrup and Hangar One Buddha’s Hand Citron.

It’s all to honor Breast Cancer Awareness Month throughout October. 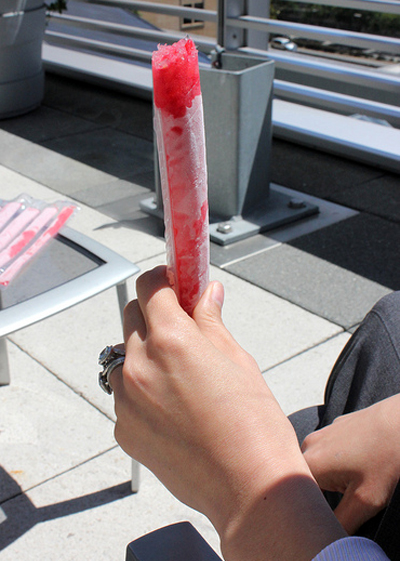 To play up the pink theme, the hotel also is serving glasses of Chateau D’Esclans “Whispering Angel” ($15) and Roederer Estate Rosé Brut ($20).

Two dollars from the sale of each of  those pink treats will go to the Dana-Farber Cancer Institute.

The four-course menu will feature such dishes as a salad of slow-roasted lamb belly and seared cantaloupe; and roasted leg of lamb with blistered cherry tomatoes.

The dinner also will feature wines by Red Car Winery on the Sonoma coast.

Price is $65 per person with an additional $35 for wine pairings.

In last week’s Food Gal contest, I asked you to how you get your mojo on. Five winners will each receive a sampler of Clif Mojo bars. Congrats to: 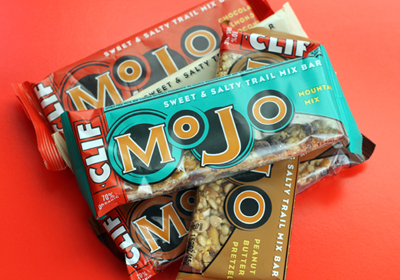 1) Edwin Chua, who wrote, “I get my mojo from being a part of this project runteamkina.com , which is about improving one’s self both as a person and making healthier choices. I started running/working out after I watched Kina Grannis perform back on April of 2011 . I’ve been a long time fan and I guess you could say she inspired me! I don’t know, I guess everyone needs a little bit of a push and I realized I need to get healthier! Especially with family history of heart disease and diabetes! So here I am, I lost 50lbs as of April 2012! I’m hoping to lose another 20lbs or so. I just feel great and working out gives me so much energy! So as far as confidence, energy, special spark, self esteem and all that…It’s all on the up and up!”

2) Ellon St. Croix, who wrote, “I get my mojo by doing for others. It’s a sure fire way to boost your own confidence!”

3) Carroll, who wrote, “Mojo, eh? That elusive ‘extra edge’ of energy and zest for life. I re-locate mine when it’s gone missing by being around kids. And by ‘kids,’ I mean people who are my own (already all grown-up) kids’ age. We are fortunate to have several extra sets of those who have entered our lives — one pair in particular who come around often to play with us and keep us young at heart. They both ride Mojo brand mountain bikes, and a win of this sampler pack would help me pick a favorite to put in their holiday stockings this coming December. Yes, they even come for Christmas! Indeed, we are the most lucky of elders! Mojo in abundance when those two are on hand.”

4) Liz, who wrote, “I get my mojo on through ballroom dancing. I can still be pretty shy in everyday life; but once I hit the dance floor for a competition, I exude energy, confidence, and have a great time. And earn top awards. I’m not ashamed to be proud of those awards since my mojo and all the practice help me get through the hard work and perform well.”

5) Jeffrey, who wrote, “I get my mojo from really long, early morning runs when the air is crisp and the only sound is the rhythmic tapping of my shoes hitting the pavement. It feels as though the world is mine and I become one with it, welcoming the sunrise as I head towards home just before my wife and two little boys awaken. Its as though I was never gone, the only evidence is in the way I hobble about the house till the sun goes down!” 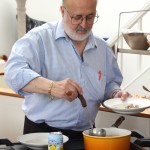 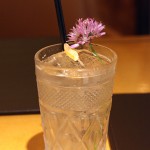 And: My Dinner at S&P Brasserie