LOS ANGELES & VICINITY — During a quick weekend trip down to Southern California recently, my sweet tooth got a major workout at three stellar places.

First up, Fonuts, the donuts that are almost guilt-free. That’s because they’re not fried, but are baked or steamed. Moreover, many of them also are vegan or gluten-free.

Fonuts of Los Angeles is the creation of Waylynn Lucas, formerly pastry chef at  The Bazaar and Patina, both in Los Angeles; and voice actor Nancy Truman.

The donuts, about $3 each, have a moist, tender crumb and a texture akin to a tea cake or muffin.

The gluten-free Banana Chocolate definitely reminded me of chocolate banana bread. The Blueberry Earl Grey had a bright purple glaze and was strewn with blueberries inside.

The Strawberry Buttermilk was the sweetest of the ones I tried and had a lovely pronounced flavor of strawberries. The Hawaiian is covered in coconut shards and hides a center of thick, creamy passion fruit custard that you’d never guess was vegan. It’s made with coconut milk.

Next, another donut shop so good that we actually went to it twice in two days.

But when a place has been immortalized on the Cooking Channel’s “Unique Sweets” and touted by Pulitizer Prize-winning food writer Jonathan Gold, you know it’s something special. 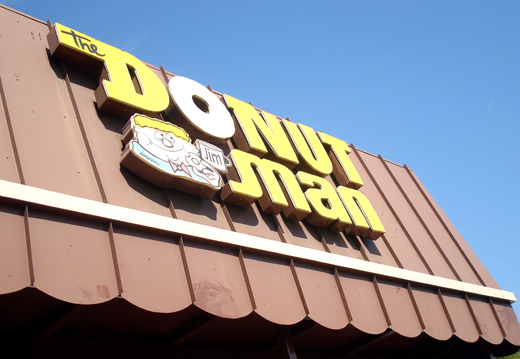 The Donut Man in Glendora is all that and more.

The landmark donut shop, open 24 hours a day, is a tiny outpost in a parking lot with a walk-up window and a bench or two beside it. For more than 40 years, owner Jim Nakano has been turning out these extraordinary donuts. It all started on a whim — when his wife wanted some hot donuts one day.

These donuts are so superlative, they are worth making the trek for. 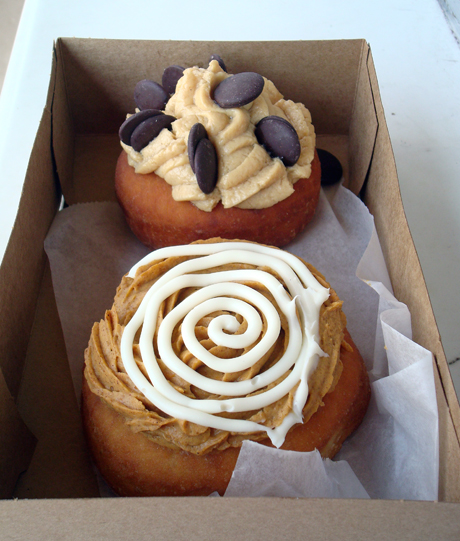 We’re talking creations like an 11-inch Tiger Tail, a twist that’s flavored with cinnamon; a huge apple fritter as big as nearly two of my palms together; a massive bear claw stuffed with diced apples and showered with chopped peanuts; a raised donut topped with swirls of peanut butter cream and big dark chocolate disks; and another frosted with spiced pumpkin cream.

The donuts, about $1.50 to $2 each, are made with an airy, light brioche-type dough. What I especially appreciate is that they’re not achingly sweet. Because Nakano makes many of his creamy toppings with cream cheese, it makes for a less sugary experience.

My only regret was that I got there too late in the year to try his famous fresh fruit-filled donuts. Nakano has grown legendary for these. From February to July, he’ll split open a donut and stuff it to the gills with whole fresh, glazed strawberries. Then, from July to about September, he changes it up and fills them with slices of fresh peaches instead.

A trip to the Los Angeles area wouldn’t be complete without a pit stop at my favorite gelato shop, Bulgarini in Altadena. Again, my undying thanks to Gold for writing about this gem.

It’s a good bet that you’ve never tasted a pistachio gelato quite like the one made by owner Leo Bulgarini. The Rome-native carries back air-dried pistachios from Sicily just for this purpose. 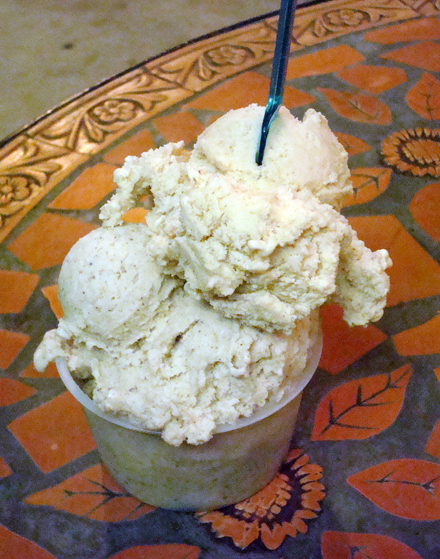 The result is an innocent enough looking scoop of gelato — but one that tastes as if 50 pounds of pistachios have been ground up for just this one serving. The gelato is creamy and fluffy. It’s also a little grainy from all the nuts that have been pulverized to make it. The flavor is so intensely nutty that it will make you stop in your tracks in utter amazement.

His other nut flavors are equally impressive, such as the hazelnut and the Kona macadamia.

Try all three in a small cup for $7.50. Nope, this gelato is not cheap. But it’s worth every penny. 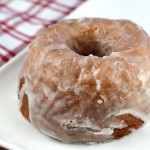 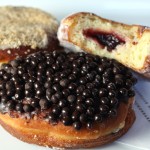 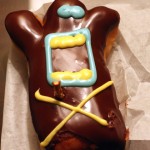 And: Voodoo Donuts in Portland 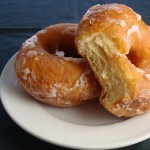 And: The Venerable Stan’s Donut Shop in Santa Clara