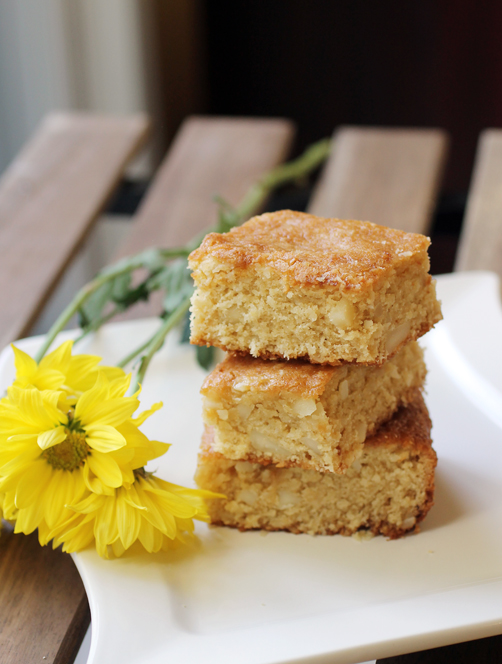 Moist from buttermilk and shredded coconut, these blondies won’t even make you miss the chocolate.

When my Dad was still alive, he loved nothing more than embarking on cruises with my Mom.

He’d return from sailing around places like the Hawaiian islands with a scrapbook full of photos.

I used to laugh, wondering if they’d ever stepped foot off the ship at all.

That’s why if he were still alive this Father’s Day, I’d bake him a batch of “Buttermilk Coconut Blondies.”

These oh-so chewy-good bars taste of the tropics, what with its generous load of shredded coconut. I couldn’t help but add a heap of macadamia nuts to the original recipe, too.

The blondies are from the new cookbook, “The Animal Farm Buttermilk Cookbook” (Andrews McMeel), of which I received a review copy.  The book has quite the pedigree, too. It’s by Diane St. Clair who started supplying the French Laundry with its ultra-rich butter when she had all of two cows.  Her Animal Farm in Vermont continues to do so today — with eight cows.

Her buttermilk also is sold now in New York City and throughout New England. In addition to dairy cows, the former public health specialist now also raises pigs and chickens.

The cookbook will open your eyes to the splendors of tangy, creamy buttermilk that can lend flavor and body to so many things, including pancakes, coffee cakes, salad dressings, breads, pork ribs, spaghetti carbonara and pie crust. There are even directions for making your own buttermilk and butter.

The batter for the blondies comes together in a saucepan, so no mixer is needed. They bake up less dense and a little taller than traditional blondies. Their yellow-gold color makes them look a little like corn bread. They possess a deeply coconuty flavor with a subtle tang. The key is to use unsweetened shredded coconut as you don’t want to go overboard on the sugar.

Even if my Dad hardly stepped foot onto the sands of Oahu, I think one bite of these would have transported him there completely. Melt the butter in a large saucepan. Take pan off the heat. Stir in both sugars, and then beat in the eggs, buttermilk and vanilla.

In a medium bowl, sift flour, baking powder, baking soda and salt. Add to the butter-egg mixture in the saucepan, stirring to blend well. Stir in the coconut and macadamia nuts, if using. Spoon the batter into the prepared pan. Bake for about 30 minutes, or just until the center is set and a tester inserted in the center emerges with a few crumbs clinging to it. Don’t overbake or they’ll be dry rather than chewy.

Let cool for 15 minutes before cutting into bars. 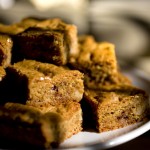 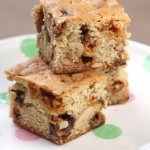 And: Butterscotch-Cashew Blondies by Martha Stewart 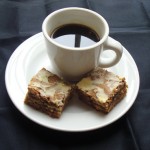