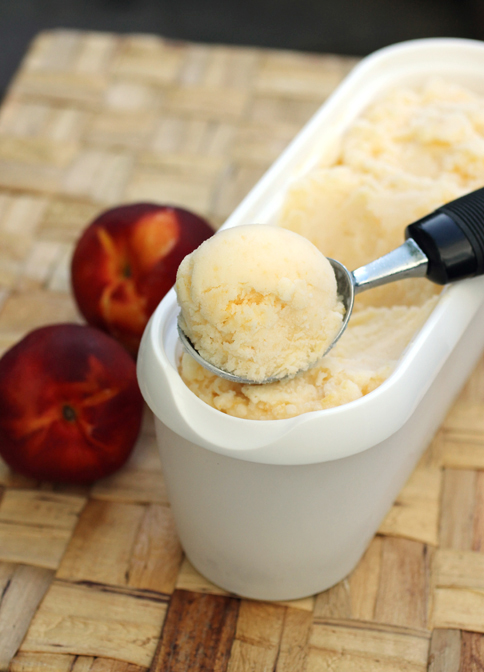 Buttermilk ice cream with chunks of peaches and nectarines.

I have done a very dangerous thing.

I have taken the plunge to buy an ice cream machine.

My freezer’s not going to know what hit it.

But as I started work on my first cookbook, “San Francisco Chef’s Table” (Lyons Press), which will publish in November, I realized I would need to test the ice cream recipes from the chefs contributing to the book.

I could no longer say “no” to the Cuisinart ice cream maker that I’d coveted.

I did the deed a couple weeks ago. And I’ve already used the dang thing three times. God, help me.

Because making your own ice cream couldn’t be easier. You just stir up an ice cream base of some sort, made with cream or milk or buttermilk, and egg yolks or not. Chill it overnight to get it really cold. Set up the ice cream maker, the bowl of which you’ve had in the freezer at least 24 hours. Turn on the machine, pour the base into it and let it go to town. Admittedly, the first 7 minutes are like watching paint dry. Not much happens. But slowly, but surely, the mixture starts to thicken and freeze, turning into scoop-able ice cream that you can stick back into the freezer to firm up even more. 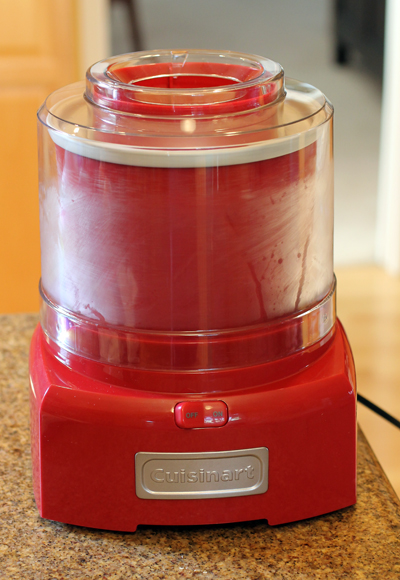 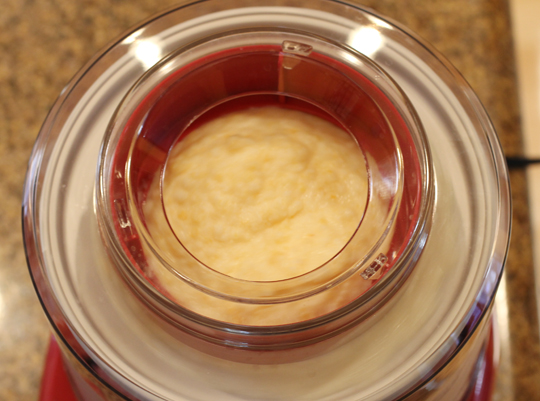 There she is, hard at work.

Since this is optimum stone fruit time, I couldn’t resist making a batch of “Peach-Nectarine Buttermilk Ice Cream” from “The Animal Farm Buttermilk Cookbook” (Andrews McMeel), of which I received a review copy. Author Diane St. Clair is the owner of the farm that supplies butter to the French Laundry in Yountville.

The original recipe calls for just peaches. But since I had both peaches and nectarines at home, I decided to use a mix.

The dash of almond extract is a brilliant touch because it mimics the flavor of a peach pit, heightening the peach flavor all together.

Buttermilk makes this ice cream a little more virtuous in the calorie department. It also contributes a refreshing tang, making this ice cream taste very much like a peach-nectarine yogurt smoothie.

It’s a perfect treat for this time of year.

If you don’t yet have an ice cream maker, far be it from me to tell you to buy one.

But I’m sure glad I gave in. Finally. 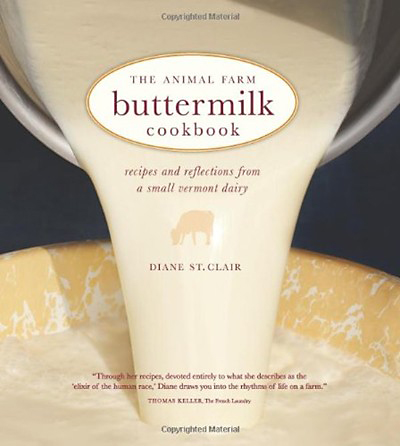 Bring a large pot of water to a boil. Using a slotted spoon, dunk the peaches and nectarines in the boiling water until the skins split and can be easily removed. Drop them in a bowl of ice water and slip off the skins. Discard the pit, chop the flesh, and put it in the bowl of a food processor or a blender.

Add 1 cup buttermilk and pulse until mostly smooth, with only a few chunks of peach remaining.

Transfer the pureed peaches to a large bowl and add the remaining 2 cups of buttermilk, the sugar, lemon juice, vanilla, and almond extract. Cover and chill in the refrigerator for several hours, until very cold.

Freeze in an ice-cream maker according to the manufacturer’s instructions. Press plastic wrap on the surface of any leftover ice cram and it will stay fresh in the freezer for a week. 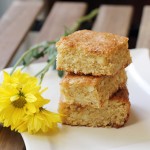 Another Recipe from The Animal Farm Buttermilk Cookbook: Buttermilk-Coconut Blondies