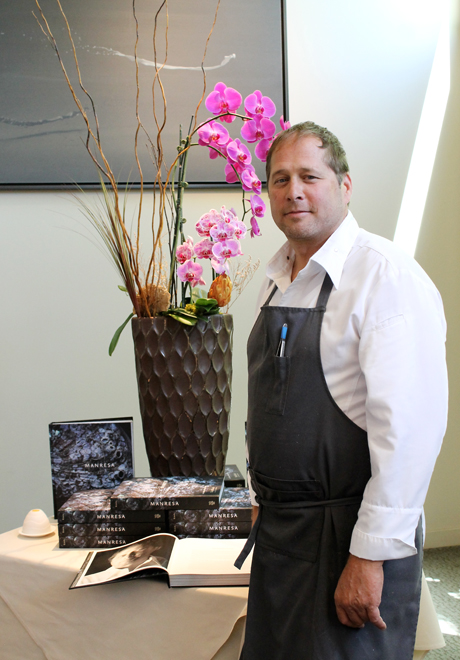 Chef-Owner David Kinch of Manresa stands in front of a display of his new cookbook, hot off the presses.

David Kinch, the supremely gifted. Michelin two-starred chef-owner of Manresa in Los Gatos, has wanted to do a cookbook for more than seven years.

But the timing was never right.

Like all that he does, it was meticulously thought out beforehand. So much so that the concept and artistic look were nearly fully formed already when he finally sat down to commit to doing it. 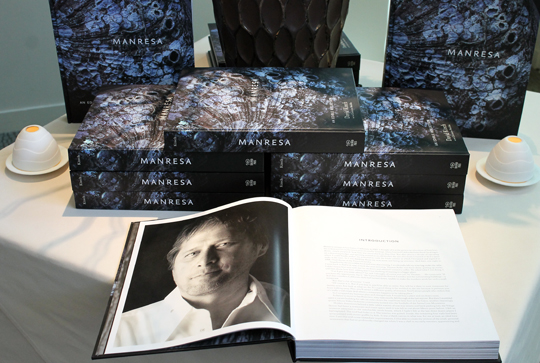 The book was 14 months in the making, but years in the thinking.

For instance, the measurements for the ingredients in the recipes are listed first and foremost in metric weights with imperial quantities following in parenthesis. That’s because that’s the way that chefs cook for greatest efficiency and precision.

Kinch spent 14 months crafting the book, which focuses on dishes served at the restaurant over its past 13 years. Almost all of the gorgeous photos in the book were taken in the Manresa dining room, with photo shoots once a month of a dozen dishes each time.

The result is a stunning book that’s quite personal, too, with stories about how Kinch took the advice of Thomas Keller of the French Laundry to buy the building he opened Manresa in, rather than just lease it, in order to cement a future there. Kinch also writes about how his relationships began with Love Apple Farms, which supplies exclusively to Manresa, and hobbyist farmer Gene Lester, a retired IBM engineer who now grows some of the most illustrious citrus around that’s spotlighted in a multi-course dinner each year at the restaurant.

The book also includes a primer on some of the herbs and vegetables used at Manresa, each of them brought to life in delicate sketches by Reed Glaser, a former cook who interned at Manresa, who has skills beyond the kitchen. His artwork was so captivating that Kinch commissioned him to do some for the book. The framed original sketches are now on display in the dining room. 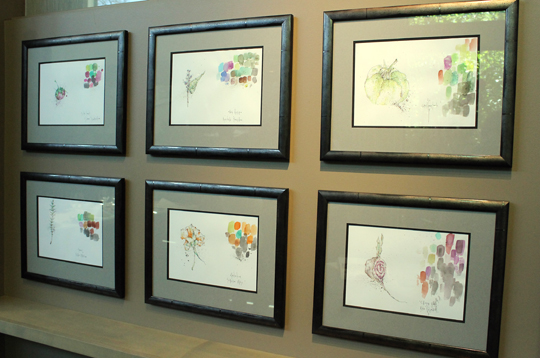 The sketches that are featured in the cookbook.

Last Friday, I was fortunate enough to snag one of the first books off the presses when I was a guest at a media lunch at Manresa in honor of the cookbook. 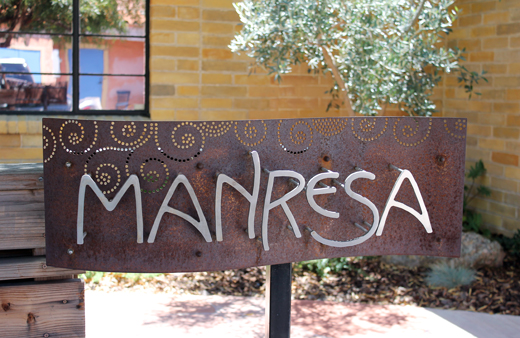 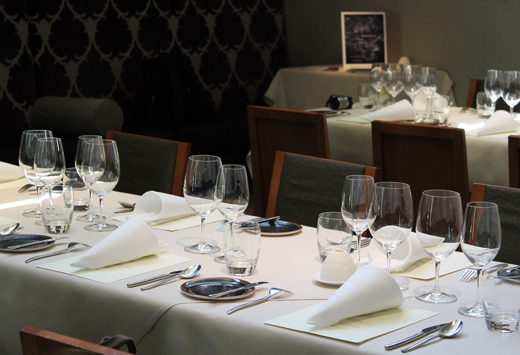 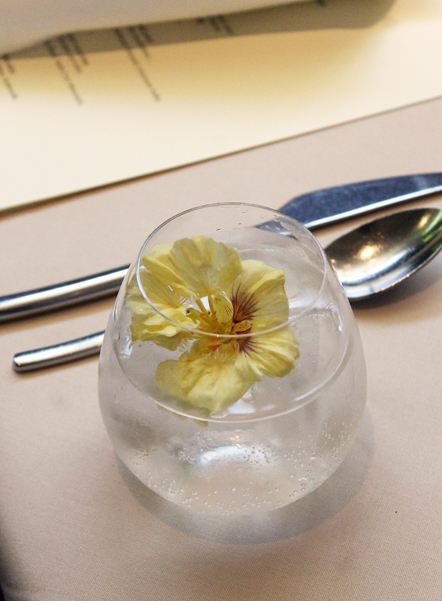 A non-alcoholic nasturtium-infused drink. The flower is from Love Apple Farms.

The dishes served that afternoon were a salute to the book, beginning with the iconic savory black olive madelienes that begin every meal at the restaurant. They were accompanied by tiny red pepper gelees rolled in vinegar powder that looked just like sugar. 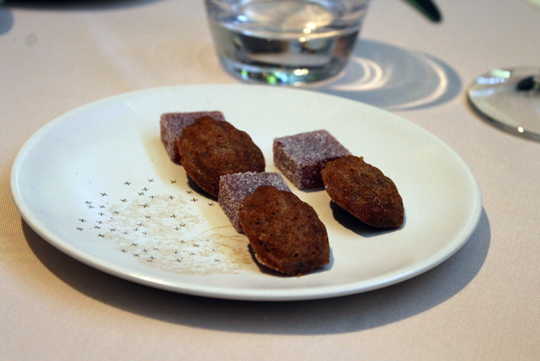 The treats that begin every meal at the restaurant. 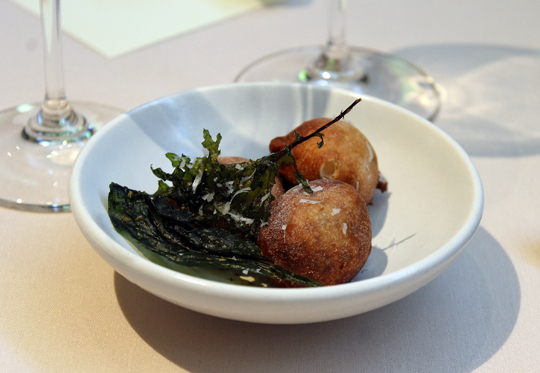 Next, garden beignets — an almost virtuous doughnut for the middle of the day. Golden on the outside and fluffy within, it was filled with stewed mustard greens and kale that had been fortified with sheep’s milk cheese for a real depth of flavor. 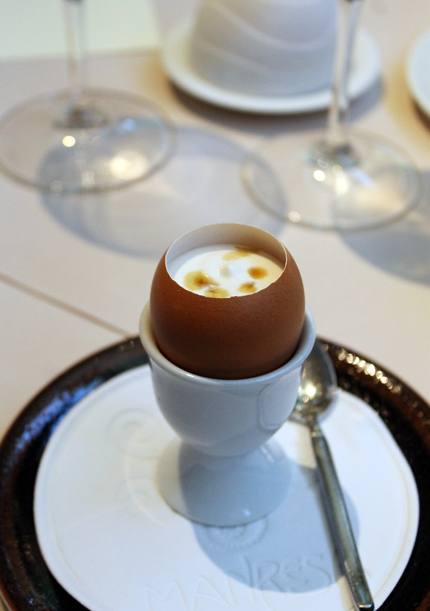 The famed Arpege egg in all its glory.

Kinch has become famous for his take on Chef Alain Passard’s famed soft egg dish. Kinch’s “Arpege Farm Egg” is a brown egg with its top carefully cut off to reveal a quivering egg, its yolk bright orange and liquidy in a sea of confetti chives, sherry vinegar and aged maple syrup. It’s mineral-y, tangy, and ever so faintly sweet in a most luxurious way. No wonder Kinch can’t take it off the menu.

“To me, this is the perfect dish,” he says. “It’s everything your palate can experience and served in nature’s best container.”

Manresa bakes all its own bread. It’s almost become a venture all its own now that it’s sold regularly at the Campbell Farmers Market on Sundays. But get there early — the 600 loaves usually sell out in two hours.

Kinch is exploring locations in the South Bay for a full-fledged bakery. If all goes well, it might even be up and running sometime next year. 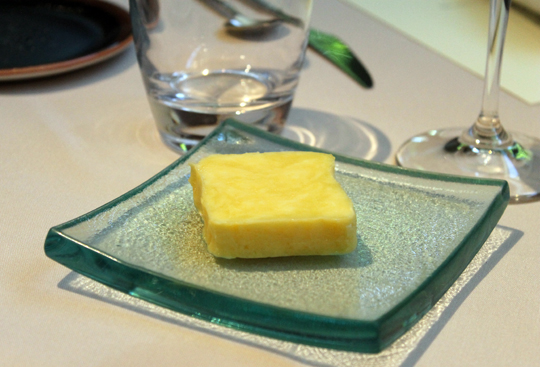 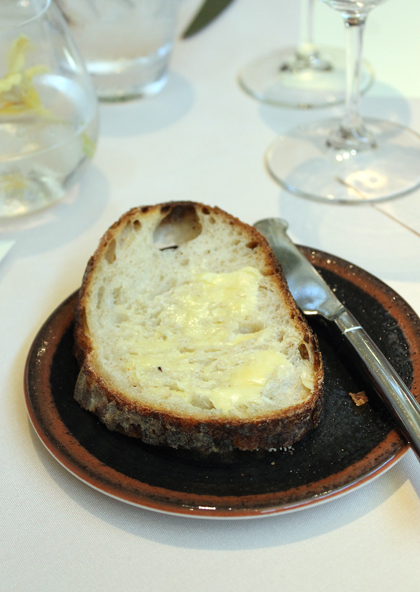 Levain bread so good that people snap it up in no time at the farmers market.

If that weren’t enough, Manresa also churns its own butter from fresh, local cream. It’s then seasoned with salt that the restaurant also makes. Additionally, Manresa has taken to making its own goat cheese from the milk from goats at Love Apple Farms. Nothing goes to waste, either, as the leftover whey is used to tenderize meat or to add brightness to vinaigrettes with its natural acidity.

“A Summer Tidal Pool” arrives in a handmade pottery bowl. The delicate looking dashi belies its powerful umami taste that comes from dried yellowfin. Uni, sea bream, clams, and seaweed from Monterey float in the briny, mushroomy broth as you lift the bowl to your lips to get every drop. 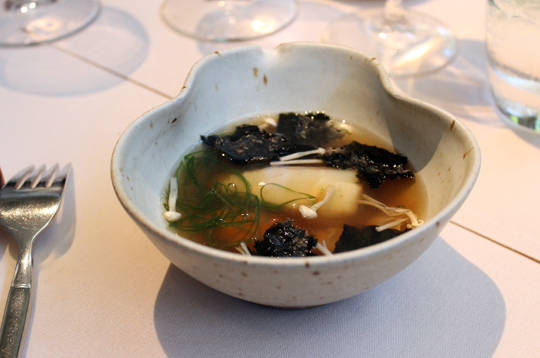 The flavor explosion known as “A Summer Tidal Pool.” 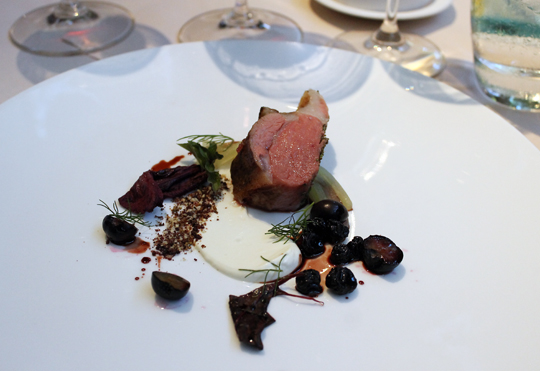 Juicy lamb rests on compressed cucumber that look like glass noodles. A powdery crumble of candied ginger, juniper, candied kalamata olives and toasted almonds rests on the side to dip into, along with a swipe of the creamiest Greek yogurt, and both dried and cooked blueberries.

Dessert is a beautiful composition of “Milk and Chocolate.” A disk of chocolate mousse is prayed with chocolate to give it an almost textile-like finish. Caramel-colored dulce de leche dots the plate that also has a refreshing buttermilk sorbet and shards of airy meringue. 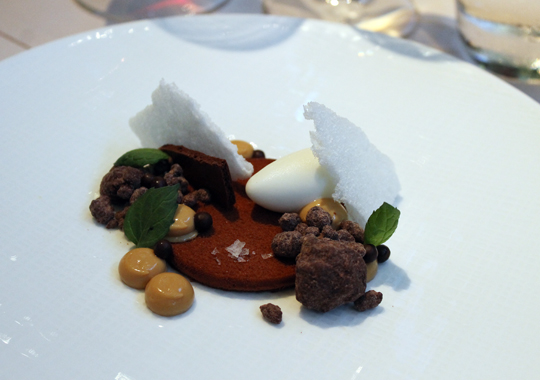 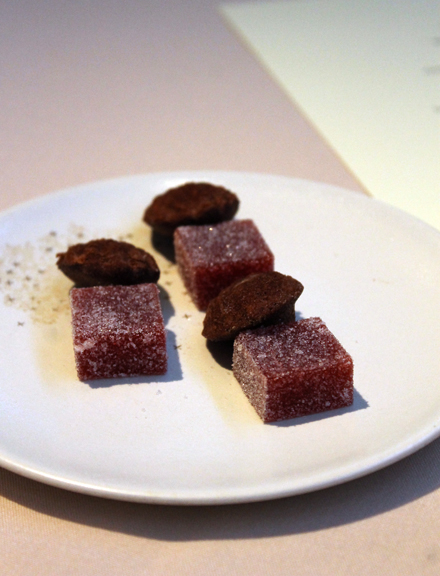 It ends how it began — only these are sweet.

Petits fours arrive looking exactly like the madelienes and gelees that began the meal. Only these are sweet. The tender tiny cakes are chocolate this time around and the gelees burst with sweet strawberry flavor. 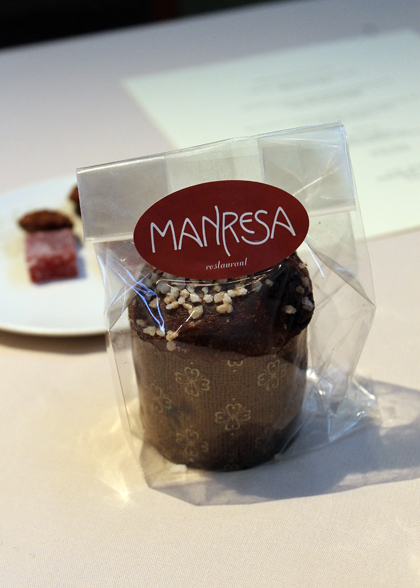 Chocolate brioche for tomorrow’s breakfast — if it lasts that long.

To take home, there are gift bags of chocolate brioche.

All of the dishes served at lunch can be found in the new cookbook — except for the brioche. You’ll just have to wait for Kinch to open his bakery and follow that up with a baking book. 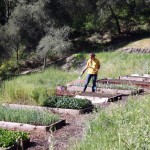