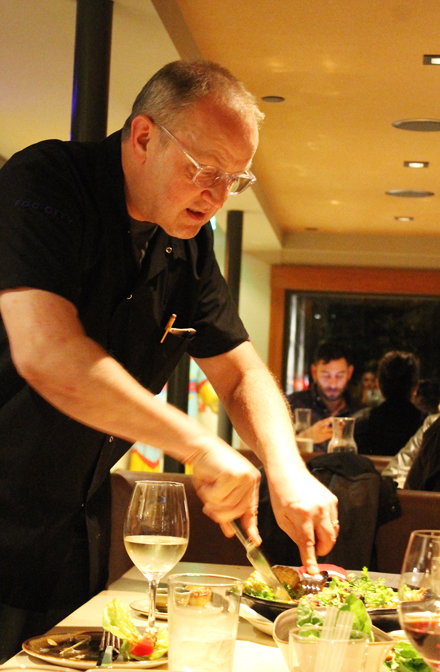 Chef Bruce Hill cutting up a chicken cooked with his patented method at Fog City.

Fog City Diner has a most storied past in San Francisco.

Long ago, the establishment nourished sailors before they shipped out to do battle in World War II. Then in 1985, Chef Cindy Pawlycn opened the doors there to what was then called Fog City Diner, serving up burgeoning California cuisine in the shiny Airstream-like restaurant.

A month ago, after an extensive remodel by owners Bill Higgins and Bill Upson, it reopened with veteran Chef Bruce Hill at the helm. It jettisoned the “diner” to become just Fog City. 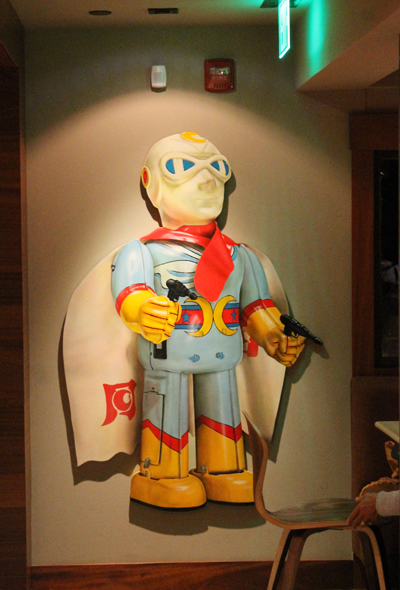 The whimsical artwork on one wall.

With Hill’s vast experience as co-owner also of Bix, Picco, Pizzeria Pico and Zero Zero, it’s no surprise that the restaurant charged out of the gate with an impressive showing, as evidenced by the media dinner I was invited to there the week it opened. All around me, booths were crowded and seats at the bar filled with patrons enjoying specialty cocktails such as the gingery “Inside Job” (James E. Pepper Rye, Nocino, Orgeat, ginger shrub and lemon; $11).

Some of them were regulars at the old Fog City Diner, who were curious to check out the new incarnation. A few mourned the absence of the mac-n-cheese from the old menu, Hill says. But it would be hard to imagine them not leaving satisfied with this new modern interpretation of California cuisine. 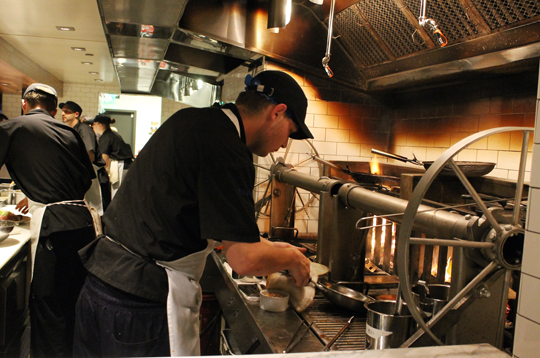 The exhibition kitchen with the 7-foot grill. And the outstanding chicken that’s cooked on that grill.

The once tiny kitchen has been enlarged to accommodate all of this. It’s also been opened up to be an exhibition kitchen now. Indeed, you can’t miss the 7-foot wood-fired grill and oven with its fiery orange flames shooting through. The cooks make great use of stainless steel presses to flatten various foods onto the grill so they cook faster and more evenly. In fact, Hill invented these and patented them in 2007. They work so well that other chefs have taken to using them, Hill says, including Wylie Dufresne and Daniel Patterson. A home version called the Chef’s Press is now even sold at Williams-Sonoma. Using these vented presses, Hill can cook the Fog City’s signature burger in just 90 seconds, and a whole spatchcocked chicken in an unbelievable 14 minutes.

And what chicken it is. I don’t think I’ve had one quite so juicy in a very long time. The chicken ($29) comes to the table stuffed into a cast-iron pan with charred Brentwood corn on the cob, and creamy fingerling potatoes. I’m betting that before long it will become as famed as the one at Zuni Cafe. 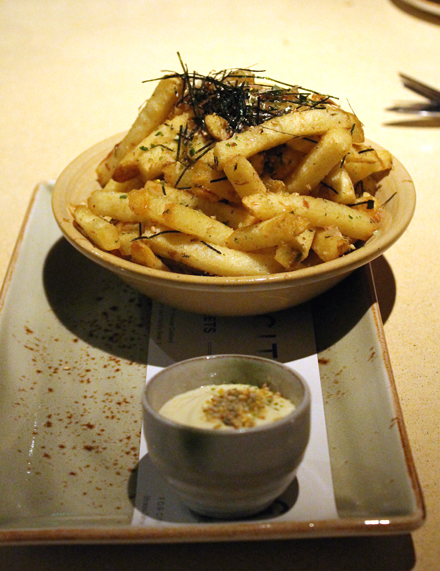 Not just any fries, but ones topped with the Japanese condiment of sesame seeds, seaweed and dried fish.

The aforementioned burger ($14) comes on a house-made bun with tomato, onion, American cheddar and a slather of smoked tomato aioli. It’s not one of those fancy burgers you see today done up with foie gras or short rib or umami bombs. Hill said his intent was to make a good classic burger. And that’s just what he’s done.

The hand-cut furikake fries ($6) make for a nice accompaniment, what with their shower of seaweed slivers over the top and garlic aioli to dunk in.

The burger aside, most of the menu is made for sharing. There are wedges of chilled dill cucumber pickles ($6) that snap when you bite into them and have a bright taste rather than a sharp one; long beans ($6) fried in beer batter that’s as delicate as tempura; and deviled eggs ($6) that are strewn with crisp quinoa for texture and perhaps a bit of virtuousness to offset the big bite of bacon that’s also on top. 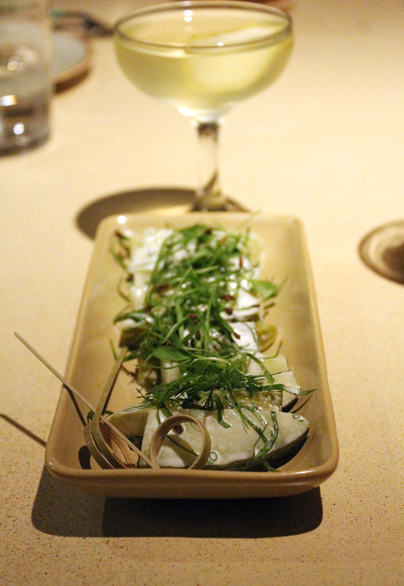 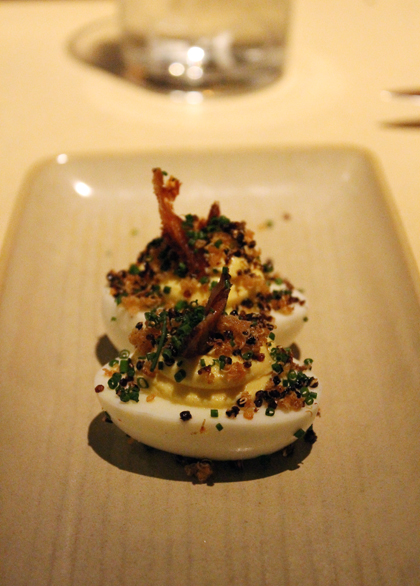 Deviled eggs with bacon and quinoa.

Pickled Gulf shrimp ($17) are plump, tangy, heady with fennel and a bit of heat from Serranos.

There’s more heat in the chilled local oysters on the half shell ($16) that get drizzled not just with shallot mignonette, but the restaurant’s barrel-aged hot sauce. 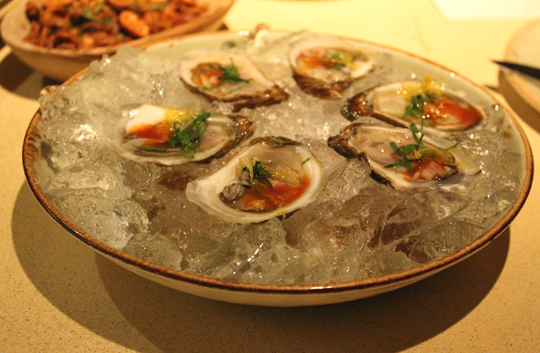 King Oyster mushrooms ($17) turn meaty, earthy and even sweet from the heat of the wood-fired oven, and get arranged atop a thick, romesco-like sauce made of Red Heart Pimentos and paprika. Dollops of dill-flavored Greek yogurt tame it just enough. 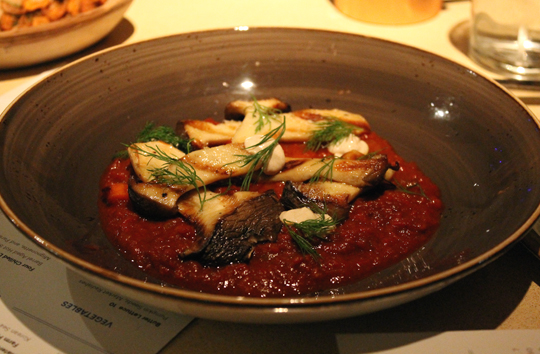 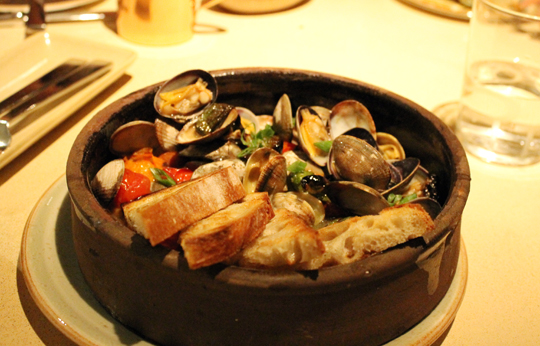 Wood oven clams ($16) are bathed in sake butter with sweet torpedo onions, corn, tomatoes and Padron peppers. It comes with grilled bread to sop up all of that brothy sauce.

Local albacore is cooked on the grill ($26) in a stew of tender shell beans, Hatch chilies, roasted tomatoes and marjoram-chili broth. Again, you’ll want more bread to get every last drop. 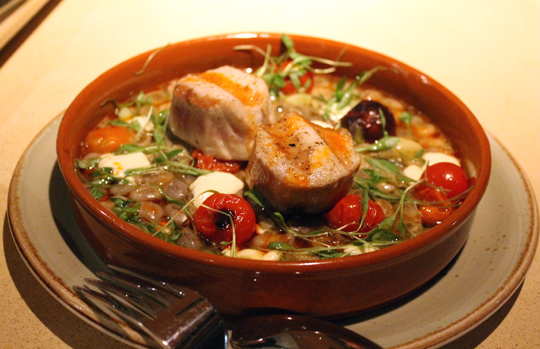 Don’t let the “Spicy Fire Seared Pole Beans” ($9) scare you if you’re not a fan of heat. They have a kick from Thai Bird chilies, but one that’s not overpowering. Garam adds a sweet earthiness, cherry tomatoes a sweet acid and mint basil a hit of lightness.

Do save room for dessert. The restaurant sports its own frozen custard machine, and Hill and Fog City Pastry Chef Aaron Toesing actually studied at the Frozen Dessert Institute in St. Louis to learn the finer points of crafting this rich ice cream fortified with eggs and cream.

At Fog City, it’s churned with Straus milk and vanilla beans, creating a really silky, incredibly smooth frozen custard. Enjoy it as is or with your choice of egg yolk caramel ($1), dark chocolate sauce ($2) or Flavor King plum sauce ($2). 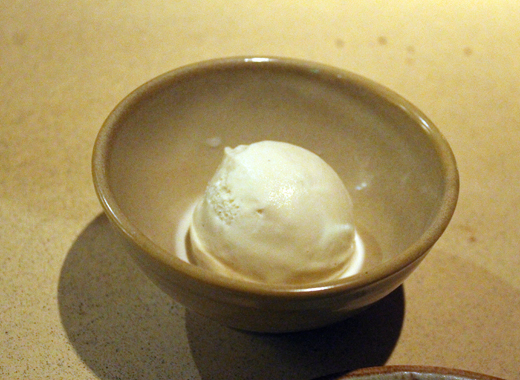 French crullers fresh out of the fryer.

Other places may offer doughnut holes. But here, you get whole doughnuts — fried to order. We’re talking French crullers ($6), with their crisp ripples all doused with Valencia orange glaze. The crullers arrive warm. Tear one open and watch the steam waft out from its airy, eggy tasting interior. You tell yourself you’re going to eat only half. But that idea goes out the window after one bite.

Fog City seduces you like that. Indeed, this is one fog that has rolled into the city that you don’t ever want to dissipate. 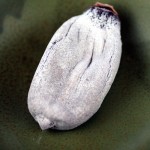 More: A Look At Bruce Hill’s Other Passion — Making Hoshigaki