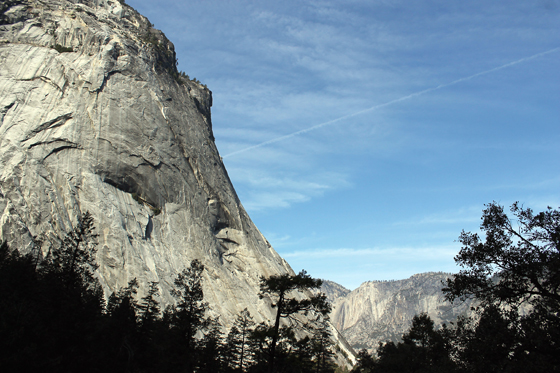 Last week in Yosemite National Park, kids in shorts kicked around a soccer ball, seniors played a game of croquet, and the mules were let out in winter for the first time in decades.

The park may have lacked its usual blanket of snow, but it had an abundance of celeb chefs.

That’s because it was time for Chefs’ Holidays at the majestic Ahwahnee Hotel. The annual event in January and February features acclaimed chefs from all over the country. In each session, three different chefs are featured. Guests get to enjoy a meet-and-greet reception with the chefs, watch each of the chefs do a demo, then enjoy a gala five-course dinner prepared either by one of the chefs or all three of them. 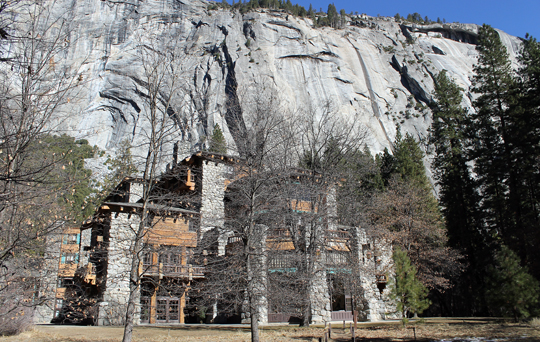 The Ahwahnee — minus any snow. 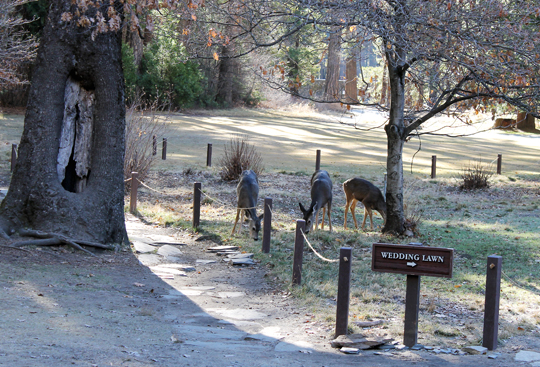 Deer nibble in a meadow behind the hotel. 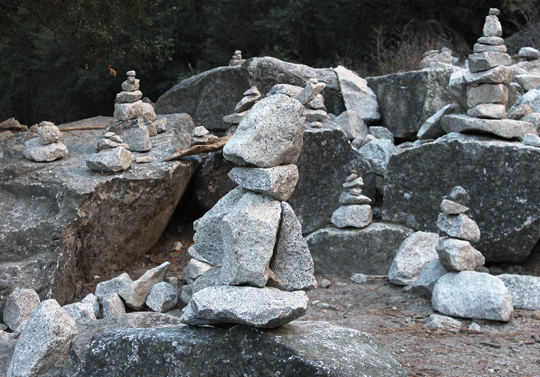 This was my second time back as a moderator for two of the sessions. 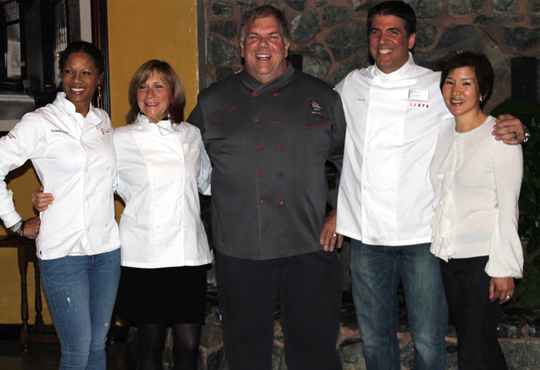 (L to R): Yolanda Banks of Abacus; Jesse Cool of Flea Street Cafe; Mark Estee of Campo; and yours truly.

Estee made veggie converts of many in the audience when he showed how to make a warm Brussels sprouts salad with Marcona almonds, ricotta salata and golden raisins. And he had the audience in stitches as he talked about how after dropping out of college after three years, he walked around his hometown mall until he spotted a pretty hostess at Pizzeria Uno and decided that was the place to get a job. Now, he makes authentic Napoletana-style pizza in a wood-fired oven at his Campo, which also has a second location in Mammoth Lakes.

Cool won over folks with her demo and samples of an apple galette made with a crust scented with thyme and topped with an inspired streusel mixture of brown sugar and Asiago cheese. 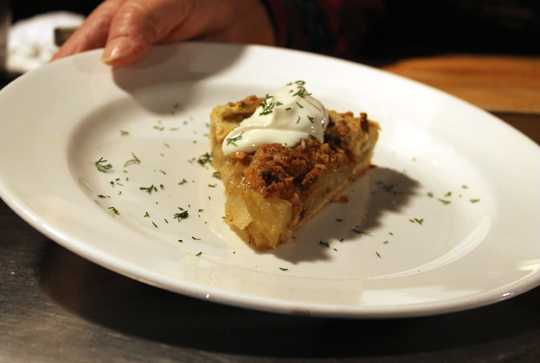 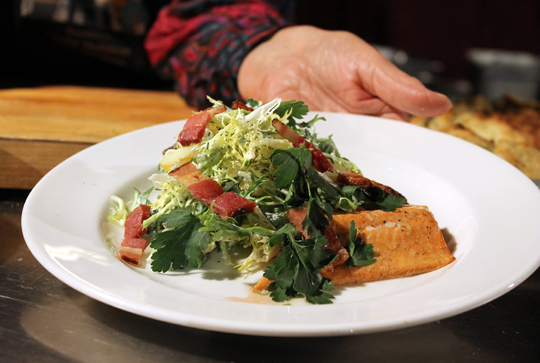 Rathbun, an event favorite who has been coming to Chefs Holidays for years, turned up the heat in his demo with his grilled fajita chicken salad with jalapeno-cilantro pesto.

He also won the award for best story ever. Just before leaving for Italy recently, he joked on Facebook that he was going to have lunch with the Pope. When he arrived at the Vatican with a small contingent from Dallas, Rathbun started talking to the tour guide who asked why he was visiting. When Rathbun made his quip about lunching with the Pope Francis, the tour guide deadpanned that he would see what he could do. Rathbun made his way along the tour, but the next thing he knew, the tour guide tells him he must follow him immediately. Down flights of stairs, through back hallways, and finally out into a parking lot, where a car awaited surrounded by Swiss guards. Rathbun was told to wait, with his camera ready, as the Pope would be getting in the car soon. As Rathbun waited, the tour guide asked if he could get him some coffee. Rathbun requested a cappuccino. The tour guide returned with the coffees just as the Pope got into the waiting car. And with that, Rathbun joked, “I had coffee with the Pope!” 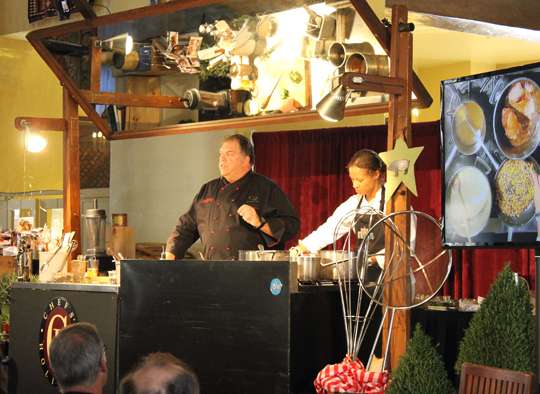 Chef Kent Rathbun on the demo stage at the Ahwahnee.

I don’t know if the Pope blessed Rathbun’s cooking, but his skills were definitely in fine form for the gala wine dinner that he oversaw in the grand Ahwahnee dining room.

It started with a creamy roasted cauliflower soup poured table-side over seared bay scallops. In keeping with his penchant for heat, it was garnished with a red chili bread stick. 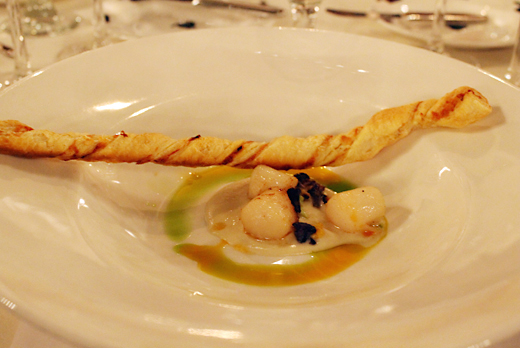 Seared bay scallops — just before a creamy cauliflower soup is poured into the bowl. 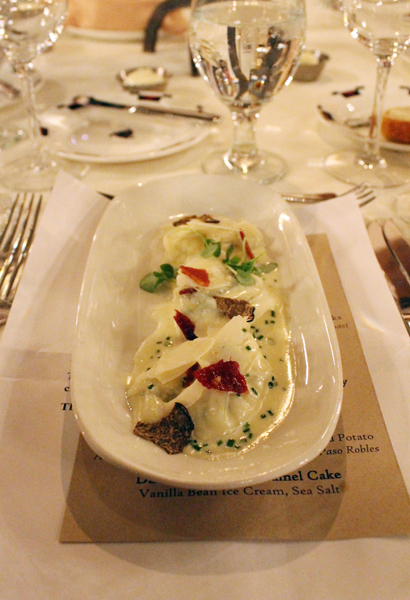 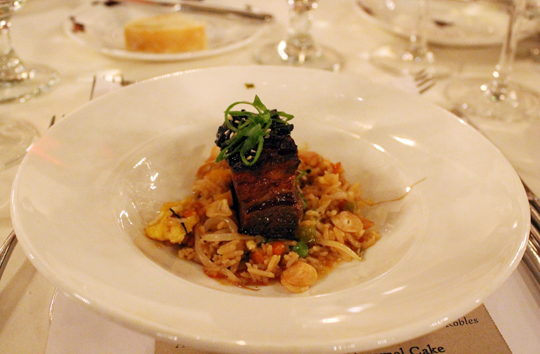 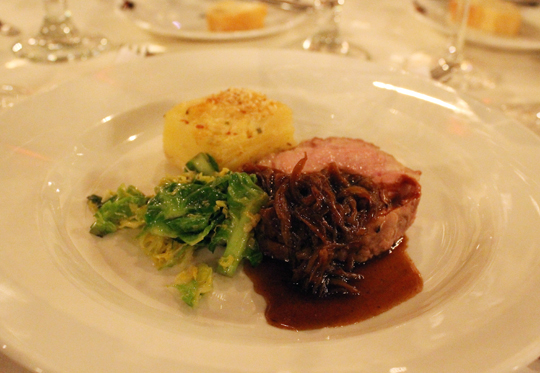 Niman Ranch pork belly was unctuous, having been braised with citrus, then finished with a tamari-chili caramel. Underneath was a bed of crispy fried rice, the grains having been fried for extra crunch.

Dessert was a sizable slab of dense dark chocolate-caramel cake that had a nice hit of sea salt over the top. 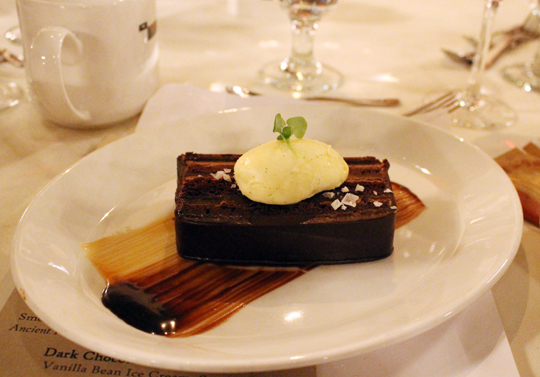 Who’s up for chocolate cake?

The next session was especially fun because the three featured chefs were women, all of whom were friends, and all of whom were familiar faces from the Food Network and Bravo TV.  You could sense a real camaraderie amongst Chef Elizabeth Falkner, formerly of Citizen Cake in San Francisco and now at Corvo Bianco in New York; Chef Ariane Duarte of CulinAriane in Montclair, NJ; and Chef Duskie Estes of Zazu Kitchen & Farm in Sebastopol.

Duarte joked that when she tried out for Season 5 of “Top Chef,” she had to sign an extensive 26-page questionnaire that asked, “Do you love your mother? Did you kill your last boyfriend?” 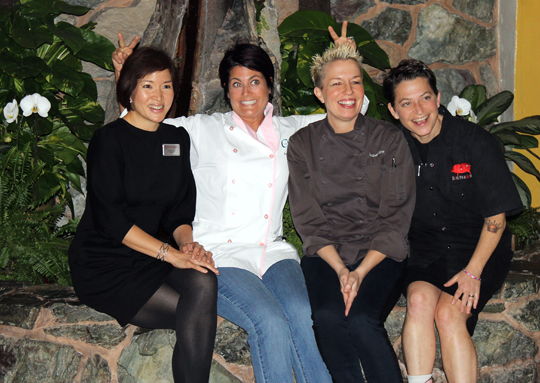 Estes, who raises heritage pigs on a farm for her restaurant, recounted how she was a vegetarian for 23 years until a fateful dinner at a friend’s home, when he prepared a slow-cooked pork shoulder drizzled with 100-year-old balsamic. Because there were only four people at the table, she couldn’t hide her food in her napkin like she normally might without being discovered. So, she took a bite of the pork. It was so sublime, it turned her for all time, she laughed. 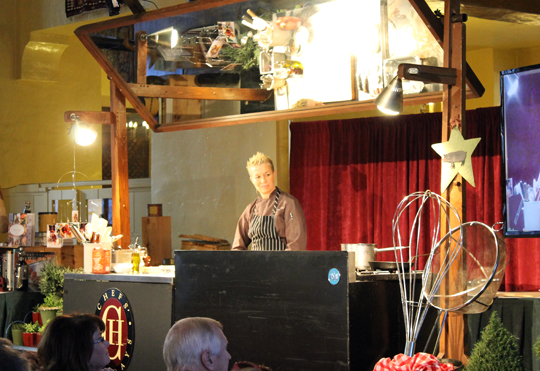 Chef Elizabeth Falkner on the stage. 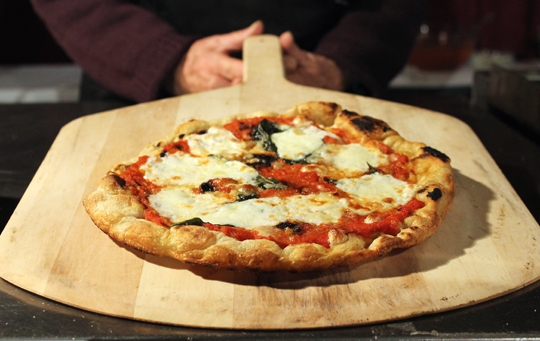 Falkner beamed to see her father in the audience. It was his first time visiting the Ahwahnee to see his daughter cook. An accomplished artist in many mediums, Avery Falkner treated the crowd to a very special moment at the gala — playing a composition on the Steinway in the dining room as his daughter looked on with pride.

Afterward, we all sat down to enjoy a first course of risotto with butter-poached prawns and pickled Buddha’s hand, prepared by the Ahwahnee’s Executive Chef Percy Whatley. 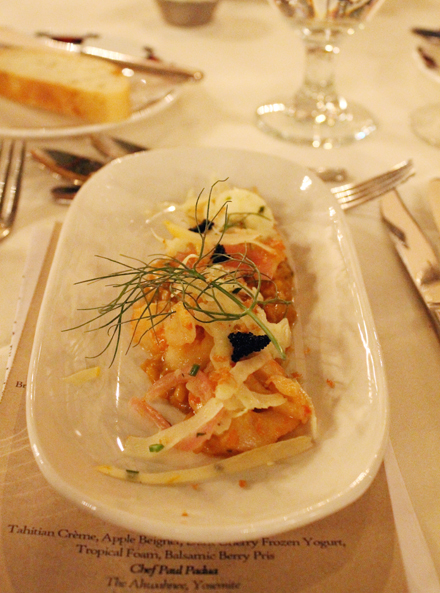 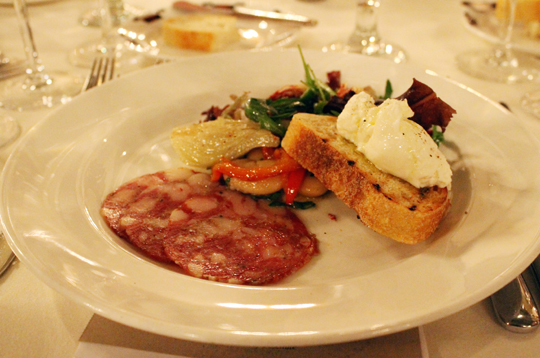 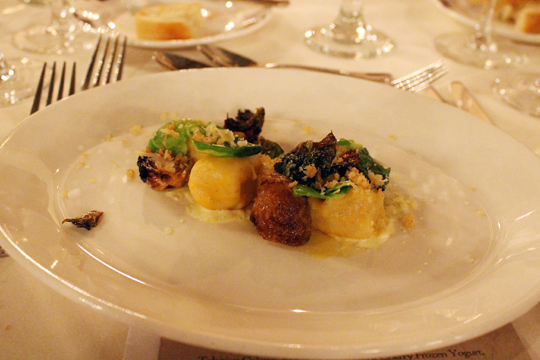 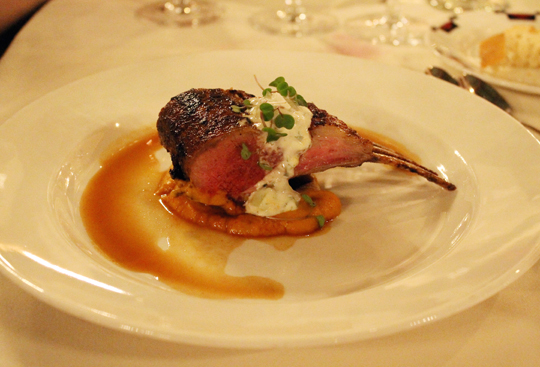 That was followed by Estes’ own Black Pig fennel pollen salumi, cut thinly and served with creamy burrata, gigante beans and Castelfranco radicchio.

Duarte’s main course was a perfect taste of Morocco with yogurt-marinated rack of lamb atop vadouvan carrot puree and yogurt raita. 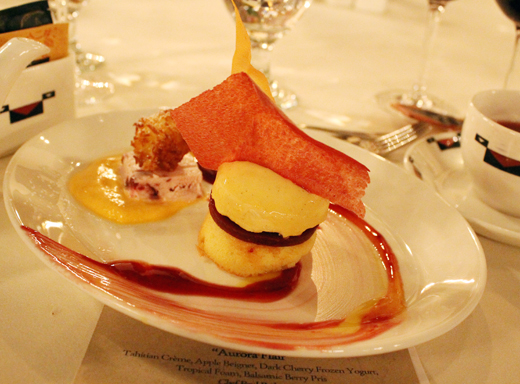 “Aurora Flair” dessert by the pastry chef of the Ahwahnee. 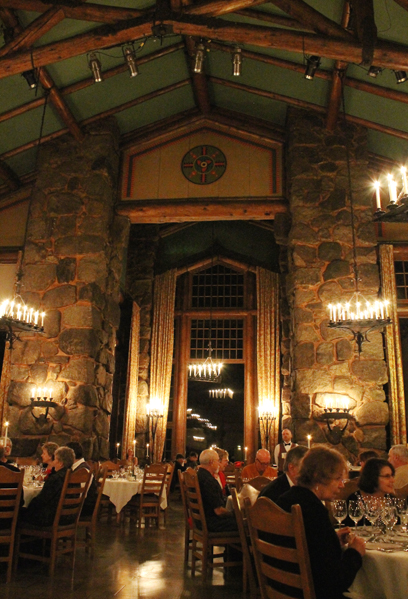 The dining room all done up for Chefs’ Holidays.

If you’d like to experience Chefs’ Holidays for yourself, there are two more sessions to go: 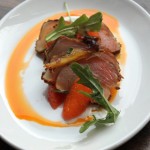 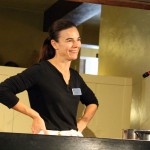 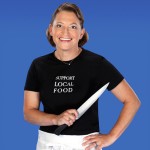 And: My Q&A with Duskie Estes