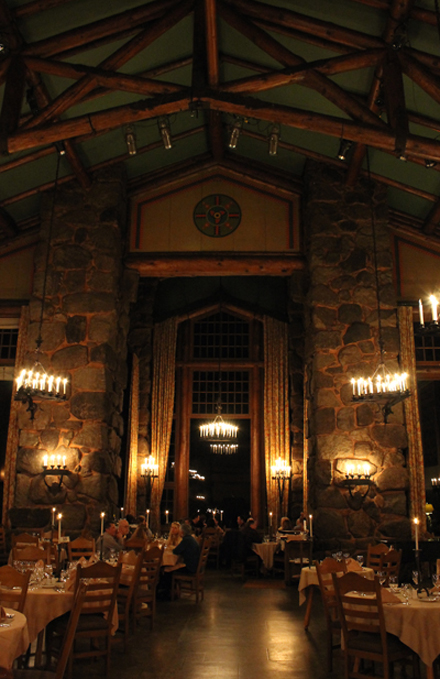 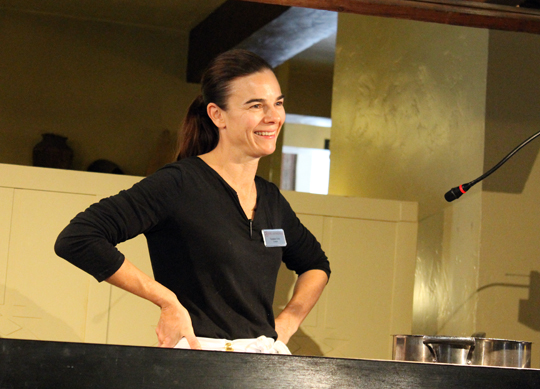 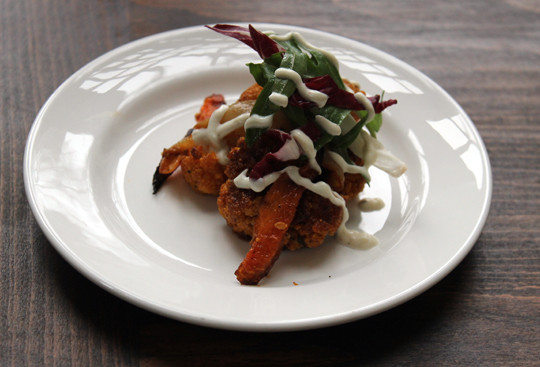 Turns out Lentz and his roommate shared a subscription to the magazine. When that issue arrived in the mail, he pointed to the cover and told his roommate, “I’m marrying HER!”

So shortly after moving to Los Angeles, Lenz decided to dine at the bar at Lucques. Goin’s sister happened to be sitting next to him. The two started chatting. Goin’s sister marched back into the kitchen to tell Suzanne she ought to come meet this guy. Goin’s sister did this three times, and each time Suzanne refused. Finally, Goin’s sous chef, who also was her best friend, walked out into the dining room to take a look. She came back into the kitchen, and told Goin, “You should go out there. He’s kind of cute.” Goin finally did. And the rest is culinary history.

That was just one of the fun tidbits Goin peppered her demo with as she prepared “Curried Cauliflower and Roasted Carrots with Dandelion and Tahnini Yogurt,” as well as “Diver Scallops with Risotto Carbonara, Pea Shoots and Chanterelles.”

Although her business partner has dropped hints about “Top Chef,” Goin says don’t ever expect her to be a competitor, as it’s just not for her, she says. 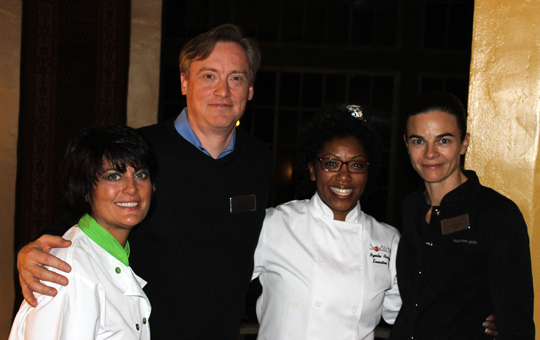 Even so, there were plenty of other “Top Chef” alumni to entertain the crowd. Chef Ariane Duarte, who owns CuliAriane in Montclair, NJ, competed on Season 5 of the Bravo TV show.

As she did a demo of “Pan Seared Day Boat Scallops, Mushroom Ragout, White Truffle Oil and Mushroom Syrup,” and “Sweet Potato Empanadas with Pineapple Chutney and Sage Cream,” she talked about her five-week audition for “Top Chef,” which she did on a lark.

She said one of the last questions the producers asked her was when was the last time she cried. She said it was on the plane ride to Los Angeles when she watched the film, “The Bucket List.” 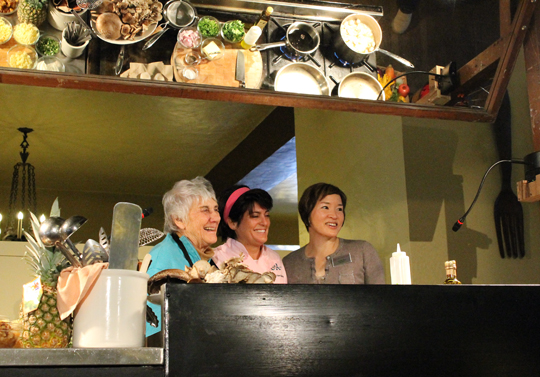 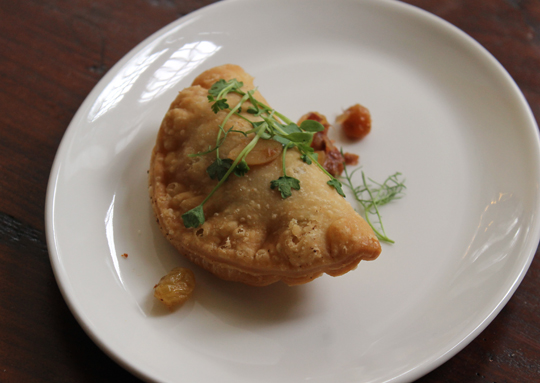 When I asked her if she did any special preparation — like cooking food from vending machines — to get ready for the show, she laughed and said, “My preparation was getting a manicure, a pedicure and my hair done because I knew I was going to be on national TV.”

Following her on the stage was Chef Nyesha Arrington of Wilshire restaurant in Los Angeles, who competed on Season 9 of “Top Chef.” Arrington was asked to be on “Top Chef” again this season, but declined because she didn’t want to leave her staff at the restaurant’s busiest time of year (last December). 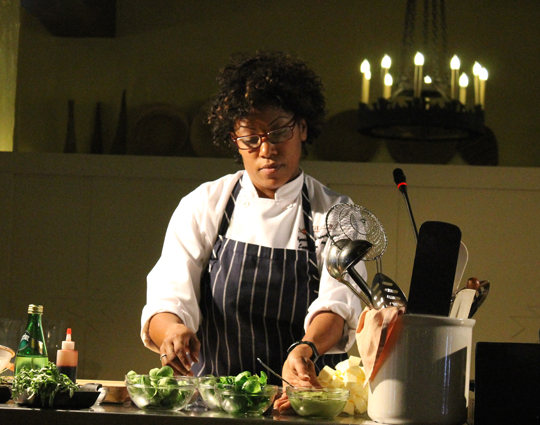 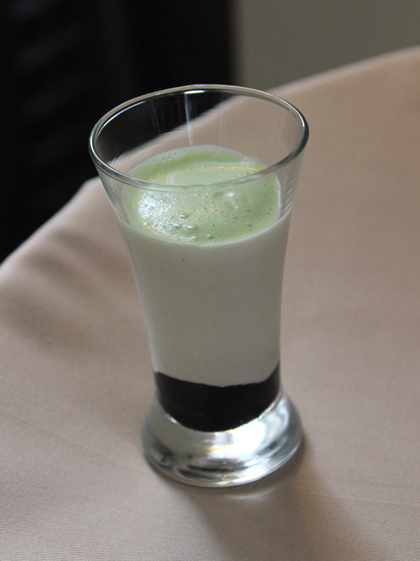 Arrington, who once wanted to be a sculptor and is trained in martial arts, got the audience’s attention as she broke down a huge hunk of beef into individual New York strip steaks, before making a port wine gastrique to go along with it. Then, she demonstrated a beautiful layered amuse of cauliflower panna cotta, squid ink gelee and tarragon-spinach froth.

It was her first time to Yosemite, and she made the most of it, even going snow-boarding the day before.

Doug Welsh, the master roaster for Peet’s, put on a fascinating presentation about coffee. Did you know that coffee is second only to oil as a traded commodity? 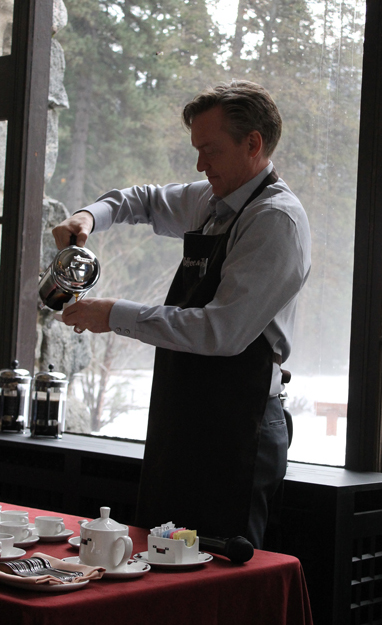 That coffee originated in Ethiopia? That Brazil is the largest supplier of coffee in the world? That he believes the French press is the best method to brew coffee because it gives a more direct infusion?

Goin’s five-course gala dinner that night began with creamy-dreamy burrata served with roasted carrots and arugula, which had been dressed with a sweet, earthy cumin dressing. 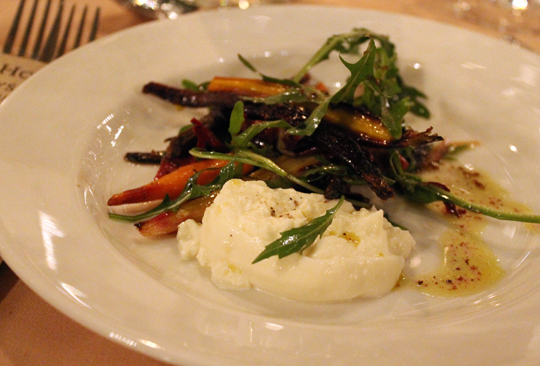 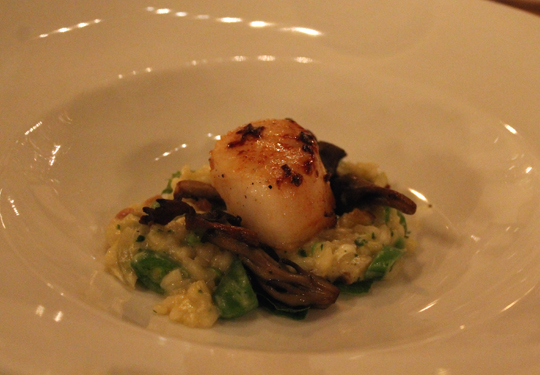 Next, the dish we were all waiting for that she had demonstrated on stage — a plump diver scallop served over risotto, done carbonara-style with egg yolks stirred into it just before serving. Pea shoots and wild mushrooms grounded the dish in the season.

Grilled duck breast arrived with a swirl of sweet potato puree and preserved orange peel that was almost jammy in texture and had the lovely, slightly bitter taste of citrus rind that a great marmalade does. 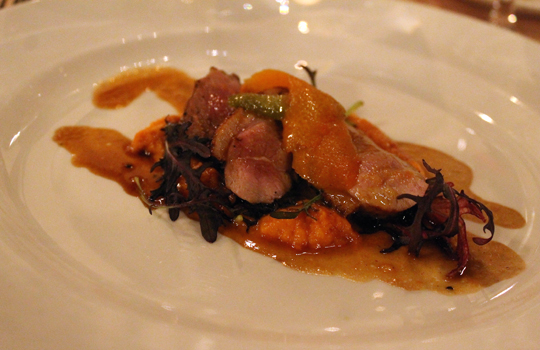 Pork confit was juicy and tender. Its richness was balanced by the sweetness of caramelized apples and the subtle tannin of the red wine used to cook the cabbage.

Vanilla pot de creme arrived in a coffee cup, hidden underneath a top of hardened bittersweet chocolate. Chopped, Marcona almonds dusted over the top added the perfect hit of salt. 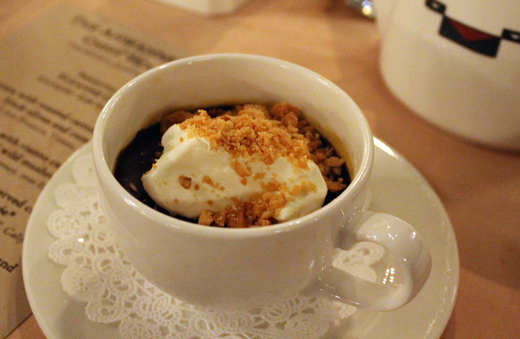 It was the perfect ending to a week of stellar eats. 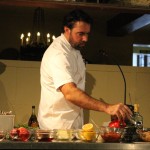 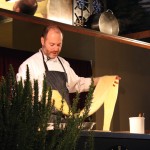 And: A Look at the 2011 Chefs Holidays with Chefs Michael Tusk, Jesse Cool and Colin Ambrose 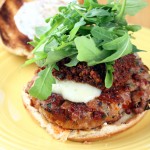